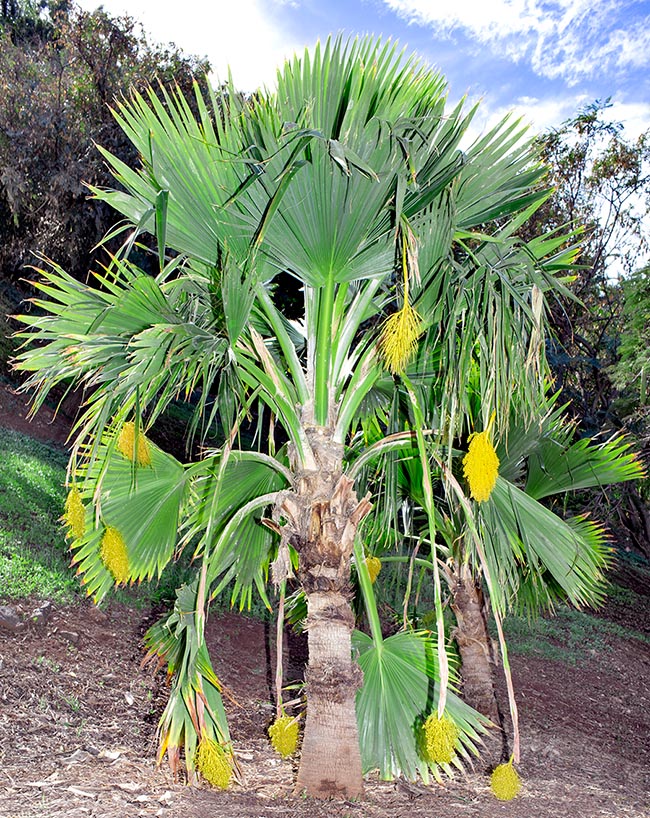 Pritchardia thurstonii is a species growing in dense colonies, on coral sandstone rocks, in the Fiji © Giuseppe Mazza

The species is native to the Fiji (islets Sovu, Ogea and Vulaga) and Tonga (‘Eua) where it grows in dense colonies on coral sandstone rocks, with almost no other vegetation, in a climate characterized by high temperatures and strong salty winds, from the sea level up to about 300 m of altitude.

The genus is dedicated to the first British Consul in the Fiji (1858) William Thomas Pritchard (1829-1907), the species to Sir John Bates Thurston (1836-1897), who held various institutional positions in the Fiji, including that of Governor.

Botany enthusiast, we owe him the foundation of the Suva Botanical Gardens, later called in his honour Thurston Gardens.

The Pritchardia thurstonii F.Muell. & Drude (1887) is a solitary species, unarmed, hermaphrodite, that can be 15 m tall in the old specimens in nature, but that in cultivation does not exceed the 6-8 m, with erect stem, of 18-20 cm of diameter, greyish, marked by the close annular scars of the fallen leaves and fissured longitudinally.

The leaves, on a 0,8-1 m long tomentose petiole, are costapalmate, induplicate, almost semicircular, 1,5-2,5 m broad, divided per 1/3-1/4 of their length in rigid bifid segments at the apex, of intense green colour and covered by a slight glaucous pruine.

The lower page of the leaf is run by tiny scales (lepidia) arranged in parallel rows, that are a distinctive character of the species.

Panicle inflorescences between the leaves (interfoliar), compact, with ramifications of second third-order, placed at the extremity of an arcuate peduncle, drooping when in fruit, 1,8-2,5 m long, that projects itself well beyond the crown of leaves. 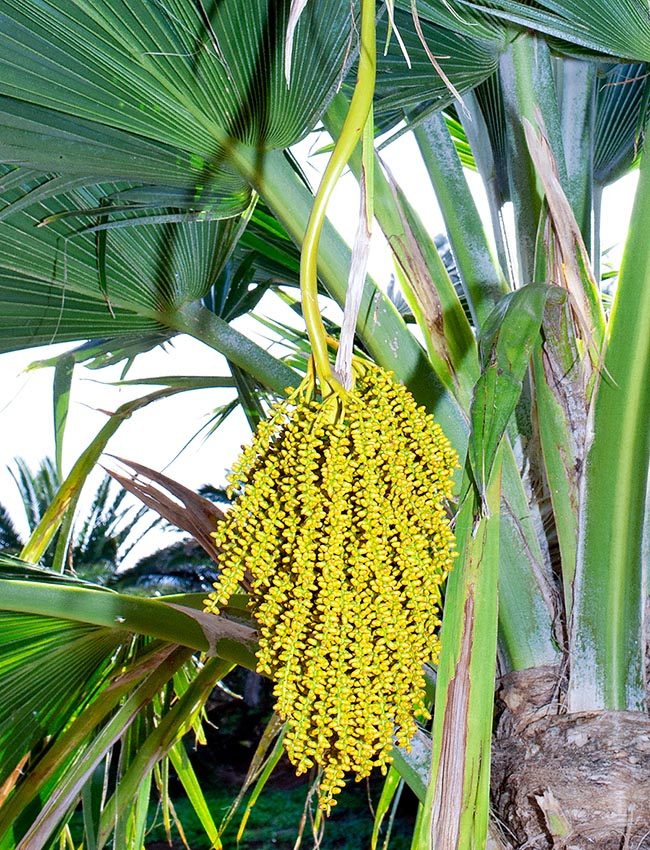 Very ornamental, it does not exceed in cultivation the 8 m. Long drooping infructescences, golden before, then red © Giuseppe Mazza

Hermaphrodite sessile flowers, 0,7-0,8 cm long, of pale yellow colour, with slightly trilobate tubular calyx, 3 petals, united at the base, deciduous at the moment of the flowering, 6 stamens and tricarpellate gynoecium.

Globose fruits, that develop from a unique carpel, of 6-7 mm of diameter, of bright red colour when ripe, containing only one globose seed of about 4 mm of diameter.

It reproduces by seed, previously immersed in water for 3 days, in draining loam maintained humid at the temperature of 28-30 °C, with germination times of 2-4 weeks.

Among the most ornamental and particular of the genus, due to the long drooping infructescences, has been introduced in several tropical and subtropical countries, utilized isolated or in group in parks and gardens of in lines at the margins of roads and avenues. In some regions, like Florida, where it had rapidly diffused for ornamental purpose, its presence has remarkably reduced having resulted as being susceptible to a sickness caused by phytoplasmas, known as “lethal decline”, present in the territory, that attacks other palms.

It requires full sun, even if it can stand a slight shade, and average high temperatures, as does not resist to values close to 0 °C, provided not exceptional and for very short period. It adapts to various types of soil, slightly acidic to slightly alkaline, provided draining, and resists to salty winds. Regular watering, but without stagnations, that may cause rottenness, and fertilizations with balanced products enriched with micro-elements in order to avoid problems of chlorosis.

Due to the limited area of origin and the fragmentation of the populations, continuously decreasing, the species has been inserted in the Red List of the IUCN (International Union for Conservation of Nature) as “Vulnerable” (species under risk of extinction in nature).