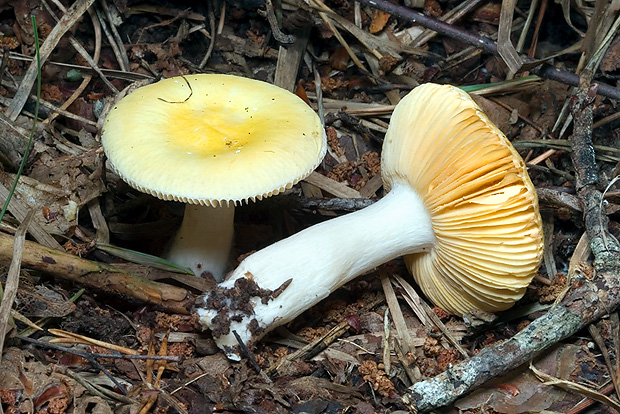 The name of the species comes from the Latin adjective “risigallìnus” = smelling of chicken with rice.

To the Subgenus Incrustatula belong fungi having the cuticle with primordial encrusted hyphae, which become pink and granular when in contact with the Fuchsin, and without dermatocystidia. Usually, the colours are lively, the lamellulae are rare, and the spores in mass are whitish, cream-white or yellow.

The Section Amethystinae groups species with yellow spores in mass, quite rarely ochre, with primordial encrusted hyphae, only exceptionally with smooth wall. To the Subsection Chamaeleontinae belong species of normally small size, with yellow spores in mass, more or less smooth cuticle and little velvety and pruinose, of yellow-pink, orange-yellow, greenish-yellow or even completely yellow colour. The cap is not much fleshy, the cuticle is detachable and the margin is smooth or just grooved especially when ripe; the stem is white, frail, and meaty then hollow.

Cap: 2-5 cm, little fleshy, initially convex, then flat, finally clearly depressed; smooth margin or a little striate when ripe; detachable cuticle, finely velvety, opaque with dry weather, glossy and bright if the same is humid; of quite variable colour, from the red-pink to cherry-red, with yellow hues, golden-yellow, little orangey disc, it may be also completely yellow.

Hymenium: adnate gills, from thick to spaced without lamellulae, with veins at the insertion of the cap, thin, frail, and initially white then golden-yellow, entire, concolorous thread.

Habitat: it grows as ubiquitous from early summer to autumn, quite common

Edibility: edible, but of scarce value.

Chemical reactions: weak and slow with the Guaiacum; the cystidia and the laticifer hyphae darken with the sulphobenzaldehyde.

Remarks. It is a species easy to be determined due to its peculiar characters: small size, frail flesh, completely detachable cuticle, grooved margin only tardily, colour with hues going from the yellow to the red-pink; golden yellow gills when ripe, absence of lamellulae; pleasant smell, like that of wilted roses, mild taste. The Russula risigallina, in its typical colouration, zoned red-pink with yellowish centre, is easily recognizable. Nevertheless, the great variability of colour has meant that around this species several forms have originated: the fo. luteorosella (Britzelmayr) M. Bon, which has pink o reddish margin and is ochre-yellow at the disc; the fo. chamaeleontina (Fries) M. Bon, which has a mixed colour of red and yellow, with greenish hues; the fo roseipes (J. Schäeffer) M. Bon, is with more or less pinkish stem, the cap with zonings of colour more variegated or marbled; the form bicolor (Melzer & Zvara) M. Bon, which has a completely white or just pinkish cap.

The Russula risigallina, always due to its chromatic variability, might be mistaken with: Russula ochracea (Persoon) which is ochraceous or ochraceous-yellow, but more robust, yellow hymenophore, neatly orange the day after the collection, with some lamellula and weak fruity smell when cut; Guaiacum reaction slow and weak; Russula vitellina (Persoon) Gray, which, however, normally, has the cap of bright yellow, chrome-yellow colour even if, sometimes, it can be found wholly white with some yellowish residual, the gills of a nice orange-yellow colour when ripe, the flesh frail with mild taste and pickles-like smell, stronger when old, sub-null reaction to the Guaiacum; Russula roseicolor J. Blum, which however, has the cap rather gibbose, from pink to crimson red with faded ochre ivory spots, white flesh with fruity smell, mild taste, reaction to the Guaiacum slowly positive, to the Ferrous sulphate (FeSO4), pale pink; Russula helios Sarnari, which is, however, slightly bigger, of citrine yellow, golden chrome-yellow colour, at times with slight pinkish hues, Orange-yellow gills when ripe, reaction to the Guaiacum almost null.