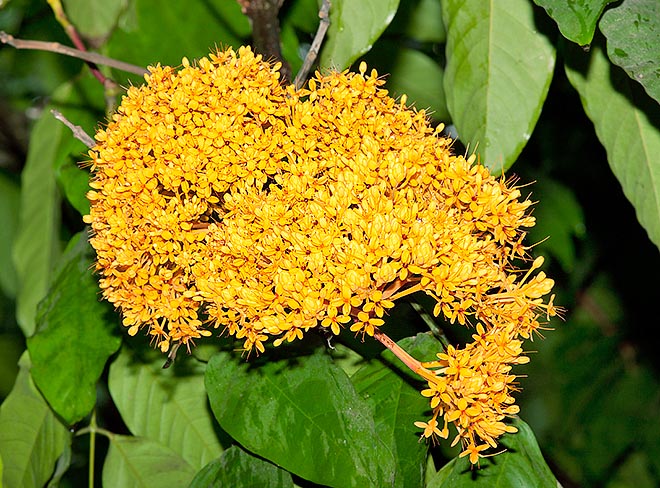 The species is native to Indonesia (Java), Malaysia, Myanmar and Thailand, where it grows in the humid forests along water streams and bodies of water up to about 500 m of altitude.

The origin of the name of the genus is uncertain, most probably it is coming from a local name.

The name of the species refers to one of its origin places, Taiping in Malaysia.

The Saraca thaipingensis Cantley ex Prain (1897) is a small evergreen tree tall up to about 8 m with alternate even-pinnate leaves formed by 4-8 pairs of lanceolate leaflets with long pointed apex, 8-25 cm long and 4-9 cm broad, of bright green colour.

The young leaves are initially tender, of cream, pink or purple colour, grouped and hanging.

Numerous inflorescences, sessile, thick, on stem and branches (cauliflory), up to about 40 cm broad, with flowers of about 2 cm of diameter, without petals, formed by the calyx, on a thin floral tube 1,2-2,5 cm long, formed apparently by 4 petaloideous sepals, being the two rear ones merged, of ovate-lanceolate shape, of colour initially pale yellow then becoming intense yellow with red centre, and 5-7 reddish stamina. 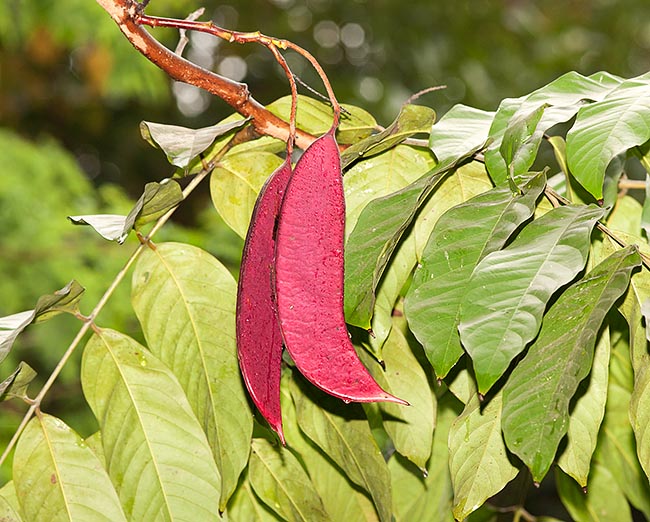 The flowers are gently perfumed. The fruits are 20-40 cm long and 4-8 cm broad, legumes flat, purple when ripe, containing brownish seeds. It reproduces by seed, in sandy soil, or with addition of perlite, kept humid, at the temperature of 26-28 °C, by cutting and by air layering.

It is considered as standing among the most ornamental species of the tropical flora due to the huge inflorescences and the young leaves giving a touch of colour to the crown even when absent. It is exclusively cultivable in the tropical and subtropical climate zones, in a position sheltered from the wind. It requires preferably a slight shade, especially in the juvenile stage, and soils from slightly acidic to neutral, rich of organic substance, well drained and kept humid.

The flowers are used in the traditional medicine. Recent studies have brought to light interesting antioxidant and antimicrobic properties from the extracts of flowers, leaves and twigs of potential interest in medicine.