The small mimetic Madeira rockfish (Scorpaena maderensis Valenciennes, 1833), belongs to the class of Actinopterygii, the ray-finned fishes, to the order of Scorpaeniformes and to the family of Scorpaenidae.

The name of the genus is the name given by the old Romans to these fishes, with reference to the spines, which recall the bites of the scorpions. The name of the species comes from Madeira, one of the locations where it lives.

The Madeira rockfish is well distributed in all the Mediterranean, but the Black Sea. After Gibraltar Strait, we find it, northwards, up to the Biscay Gulf, but with few individuals in the colder waters, and, southwards, up to Senegal, Madeira, Azores, Canary and Cape Verde Islands included. 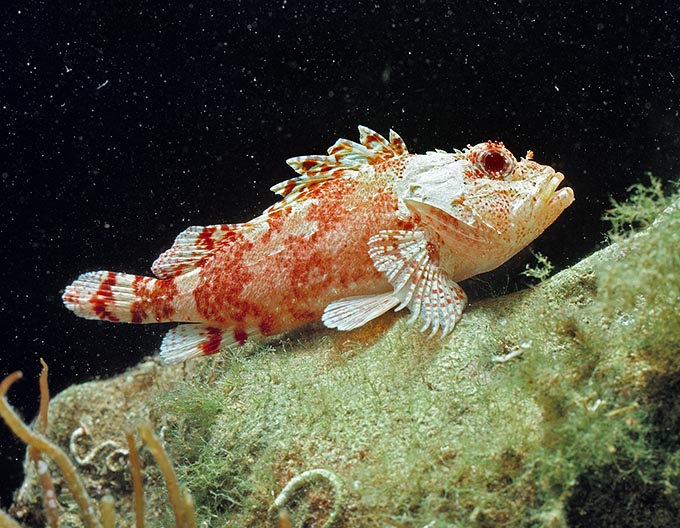 The Scorpaena maderensis measures 14 cm at most, but the dorsal spines are poisonous © Giuseppe Mazza

It never gets far away from the coasts, showing a clear preference for the islands. It camouflages with the rocks, between the 20 and the 40 m of depth, where, more or less sedentary, it looks for its modest preys.

It is probably one of the smallest scorpionfishes, reaching, at most, the 14 cm and, usually, the 10 cm. Tall and short body, formed for about one third by the head, with well visible ctenoid scales, present also on the chest and on the throat. The laciniae are decidedly poor and the usual occipital depression is absent.

In due proportion, the mouth is imposing as in the other species, with the tongue attached at the bottom and bands of villiform teeth, also on the vomer and the palatines.

The Madeira rockfish nourishes of small fishes and crustaceans. Little is known about its reproductive modalities, but it is not by sure and endangered species due to its vast diffusion, the fact that it does not have any commercial interest and that the populations may double in 1,4-4,4 years. The vulnerability index of this species is of 36 over 100.