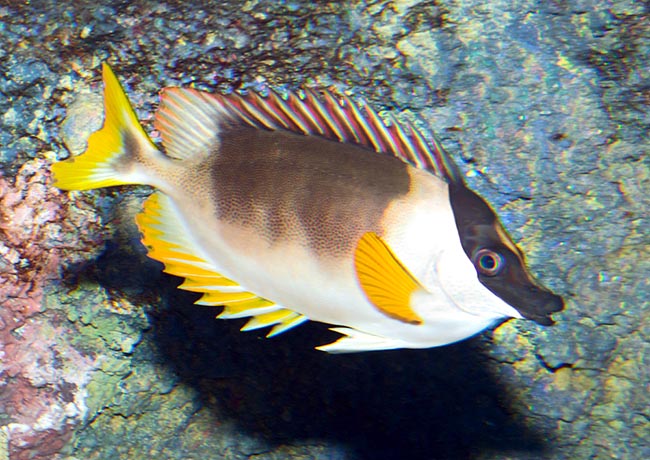 The Magnificent rabbitfish or Magnificent foxface (Siganus magnificus Burgess, 1977), belongs to the class of Actinopterygii, the ray-finned fishes, to the order of Perciformes and to the family of Siganidae, that has only one genus, Siganus, with 29 species.

Animals often called rabbitfishes, due to the contour of the head with prominent lips and small interlocking teeth for grazing in the seagrass meadows.

They are marine fishes or of brackish water at the most, rarely exceeding the 40 cm of length and that may have an important rôle in the human feeding.

The specific name magnificus, in Latin simply means magnificent, grandiose, splendid, due to the unusual and elegant combination of colours. 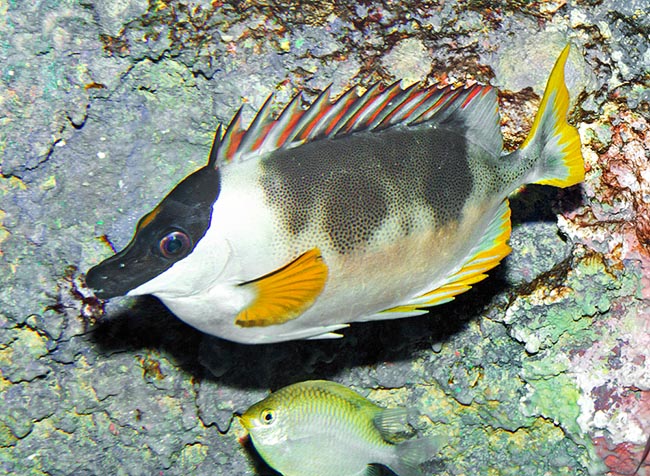 The Siganus magnificus has a relatively small diffusioon area in the tropical waters of Eastern Indian Ocean and the nearby waters of Western Pacific. Basically, we find it only in the Mergui Archipelago in Burma, in the Surin and Similan Islands in Thailand, the Andaman Islands in India and in Indonesia, where however do not exist precise reports also because it is matter of modest sized fishes, difficult to observe, living mainly isolated or in pair.

They usually swim in shallow waters, not beyond the depth of 20 m, among the madreporic formations. 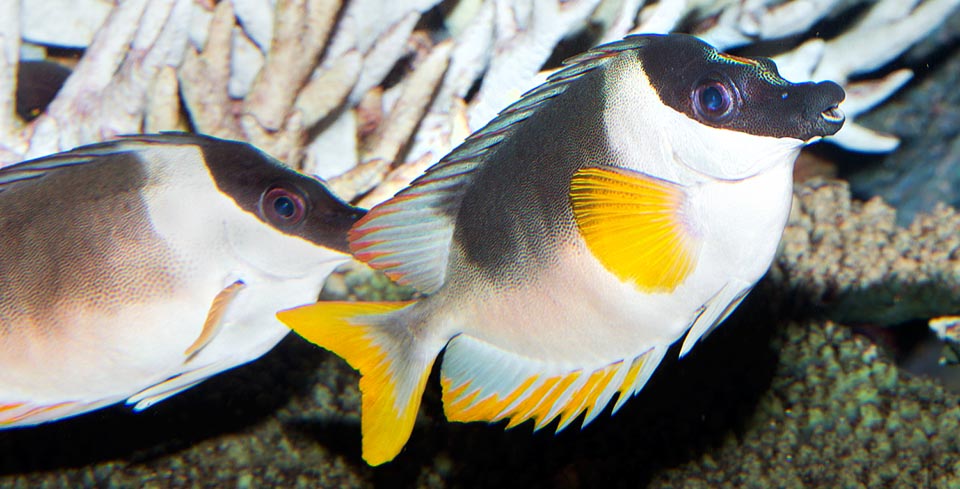 Lives alone or in pair, eating seaweeds, aquatic plants and plankton, but not ignoring small crustaceans and molluscs it finds among corals or in the submerged prairies © Giuseppe Mazza

The large pectoral fins have 16 soft rays and the ventral 2 spiny rays and 3 unarmed. The tail is forked. As often occurs in the world of the Siganidae, the spiny rays are imbued with a poisonous mucus. Characteristic of the species is the dark ocular band that, interrupted by a yellow stretch on the front, goes from the snout to the first dorsal spiny ray. 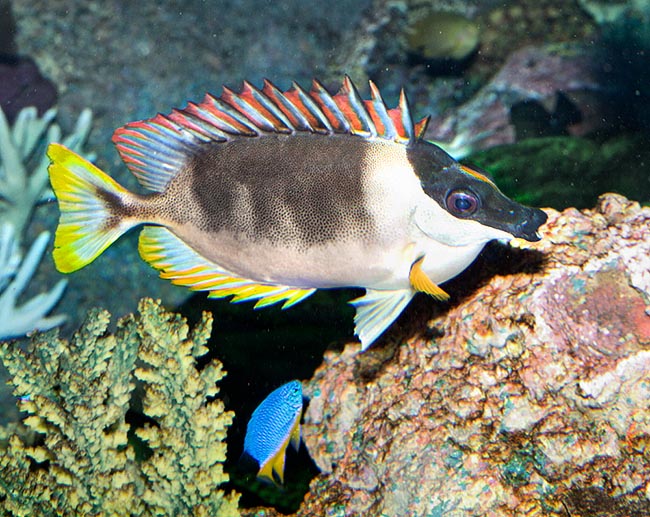 The fins spine, emphasized by colour, are imbued with poison. Presently is not endangered © Giuseppe Mazza

Then follows a vast clear zone going down along the body, almost symmetrical to the facial mask, up to the abdomen. The rest of the sides is occupied by big grey-brown shaded spots, formed by a crowd of mimetic small dots going toward the back tending to merge each other.

The Siganus magnificus nourishes mainly of seaweeds, aquatic plants and plankton, without ignoring small crustaceans and molluscs it finds among the corals and in the submerged prairies.

The fecundated eggs are entrusted to the currents and the juveniles, going back to the reef, grow up sheltered by the corals.

The resilience is quite good, seen that theoretically 15 months are sufficient for doubling the populations decimated by the events, and the vulnerability index marks only 23 on a scale of 100. However, it is a species to be kept under observation due to the limited diffusion and due to the fact that in some zones a decrease of the 20% of individuals has been noted over three generations.

Siganus magnificus was last modified: May 3rd, 2022 by Giuseppe Mazza