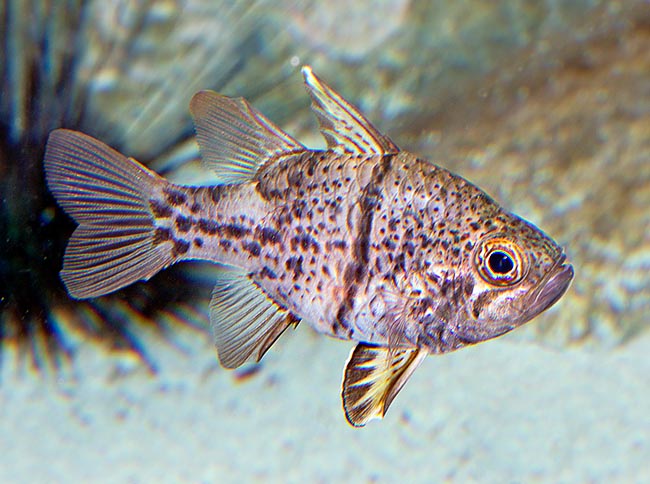 Little colorful and very mimetic, the Orbiculate cardinalfish (Sphaeramia orbicularis Cuvier, 1828) belongs to the class of Actinopterygii, the ray-finned fishes, to the order of the Perciformes and to the family of Apogonidae, which counts 22 genera and more than 200 species in the tropical seas, with some exception like the Apogon imberbis of the Mediterranean of those of the genus Glossamia living in the rivers freshwaters.

The etymology of the genus “sphaeramia” comes from the Greek “sfaira” = sphere, due to the roundish appearance of the animal and from “amia”, the term used by the old Greeks for generically indicating the sharks, due to the great first dorsal fin, which recalls these sea predators.

The name of the genus may also come from the old genus Amia, erroneously used until the middle of the 20th century for the “cardinalfishes”. It would be then a “round Amia “.

The name of the species “orbicularis”, in Latin “orbicular, circular, relevant to the orbit”, emphasizes the shape of the fish, more or less circular when the fins are stretched, but especially the great orbit of the eye, enormous if compared to the head for a good night vision.

It lives in the tropical waters of the Indo-Pacific with a very vast distribution, at times discontinuous, from East Africa to the Kiribati Islands. Northwards, it reaches the southern islands of Japan and southwards the Fiji, Tonga and New Caledonia. Indicatively, we find it in Mozambique, at the Seychelles, in Indonesia, Australia, New Guinea, Micronesia and Philippines. It is obvious that, being a small and mimetic fish, without any commercial interest and of little relevance on the scientific level, it is by sure present in other unverified locations in the vast described area.

It is present in the madreporic formations, but only in shallow and calm waters, so much that we find it often in the ports or in the lagoons, even brackish, and among the roots of the mangroves. It never goes down more than 5 m of depth, against the 15 m of the Sphaeramia nematoptera to which it is decidedly akin. 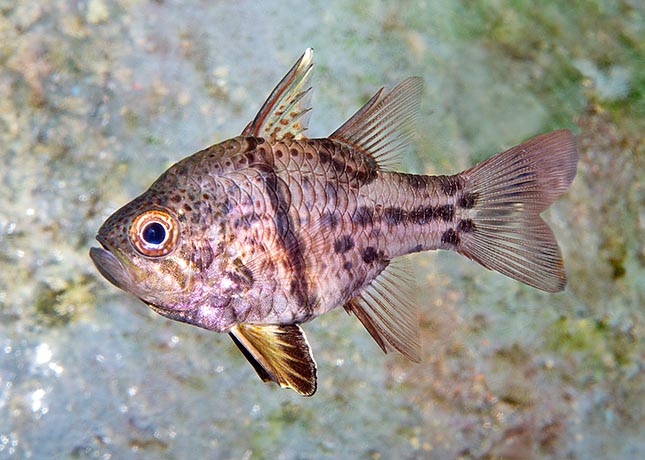 It lives in shallow waters and among the mangroves roots, eating also insects © Giuseppe Mazza

The flat and more or less roundish, body can reach the 10 cm.

The ventral fins, almost black, show a yellow cream rayed design and are much shorter than the showy blades of the Sphaeramia nematoptera.

Compared to this species, the livery is by sure modest. We note a great vertical dark bar, crossing the body from the beginning of the first dorsal fin, and the presence of countless dark small spots, reddish on the head, becoming big and typical towards the caudal peduncle.  The big eye has orange iris, white-veined, and the mouth opening downwards.

The orbiculate cardinalfish goes hunting usually before dawn or, if in the evening, during the crepuscular hours. It mainly predates small crustaceans, small worms and small fishes, but does not ignore, rising to the surface among the mangroves, the insects falling down from the branches or moving on the surface of the water. It lives in small schools.

The females reach the sexual maturity when 6 cm and the males when 7, seen that then they are those keeping in their mouth the fecundated eggs till the hatching. These last can be even more than 10.000 and hatch over a period of 7-8 days.

The populations may double their units in less than 15 months, it is not a species adapting to everything and, furthermore, it is not sought for by the aquarists. Therefore, the vulnerability index is extremely low: just 11 on a scale of 100.