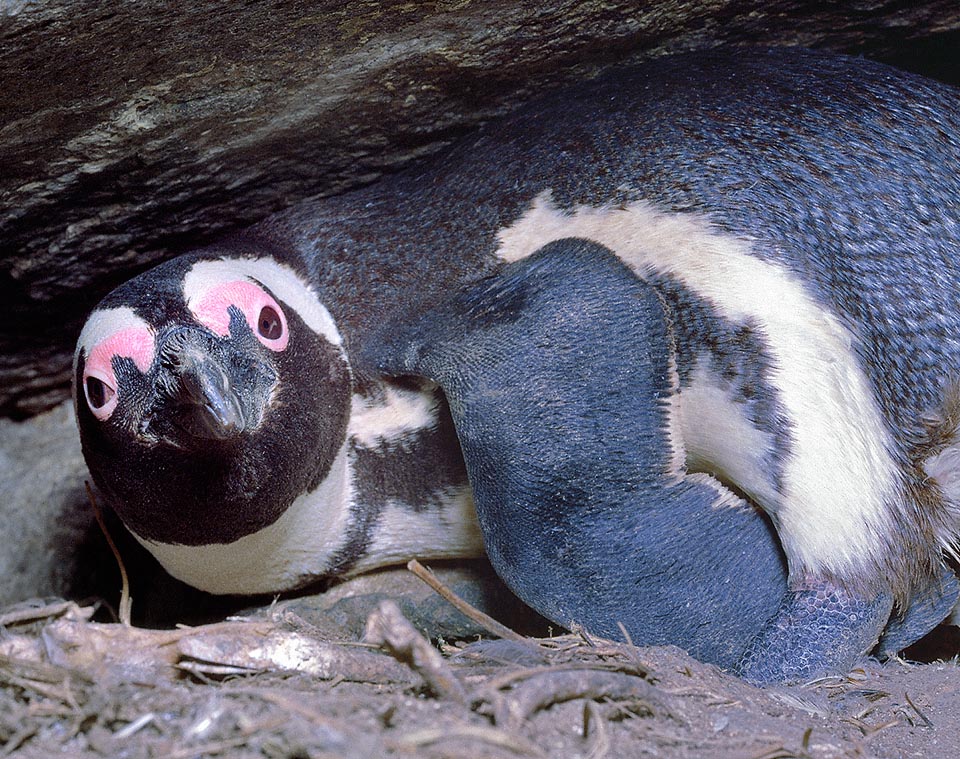 The African penguin or Cape penguin, here in a den, is called also in German and in Afrikaans Penguin with the glasses due to the showy and characteristic facial mask © Giuseppe Mazza

Few are the species of penguin that live in environments distant from the glace of Antarctica and of sub-Antarctic islands and very few are those having chosen latitudes in temperate or even equatorial areas.

We know of some New Zealander species living at 45° of latitude South, of the penguins of the Valdés Peninsula in Argentina at about 43°, of those of the Galapagos perfectly on the Equator but also Africa has its own penguins at 24°, practically on the Tropic of Capricorn.

These species, facilitated by the cozier environment where they do live, have had the possibility of being studied more assiduously and in a more detailed way than any other similar, thus obtaining a so vast

knowledge about their life to allow to confirm, without any doubt, that they stand among the penguins more studied in the world. 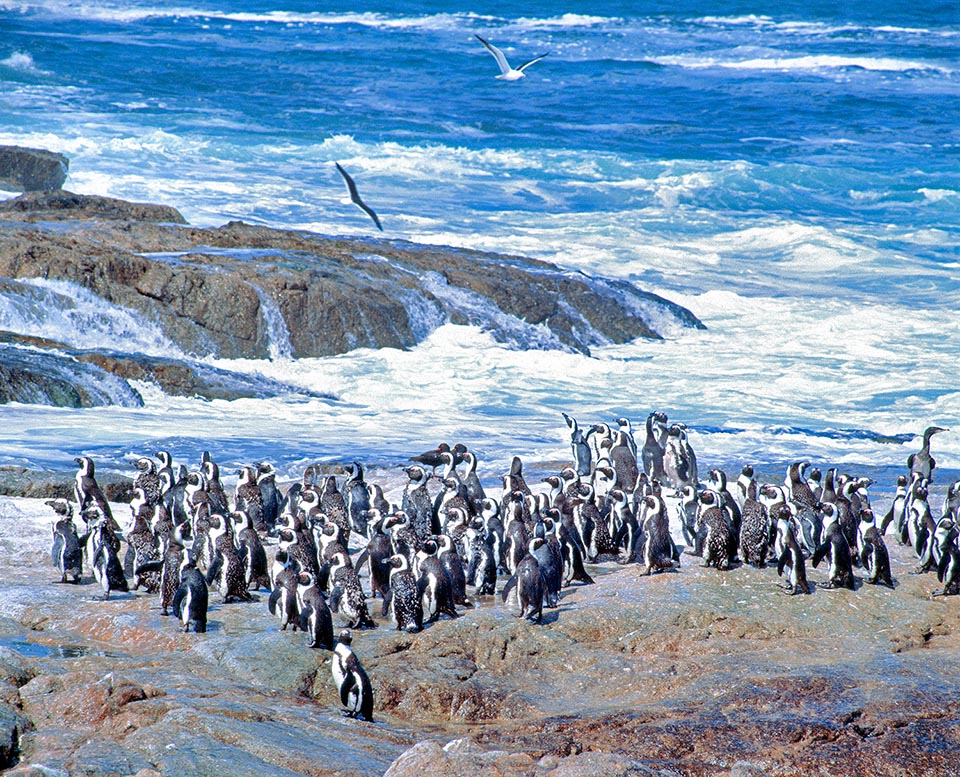 Panoramic of Saldanha natural reserve, 150 kilometers about north to Cape town, that guests several hundreds of couples of Spheniscus demersus. Further south, off Dassen Island, nest about 60.000 Cape Penguins united in a giant colony that assembles almost the 2/3 of the effective members of the species © Giuseppe Mazza

The penguin present in Africa is one of these and with no doubt, seen the collocation in an area inhabited from centuries by an advanced civilization and strongly oriented to the protection of the nature, has enjoyed an ancient safeguard that has helped it to cross, unharmed, tumultuous periods for this species.

It must be remembered that Namibia and South Africa, where these birds are present, have been the first nations in the world to establish national parks for the protection of the fauna, already in 1906 and 1926 respectively. 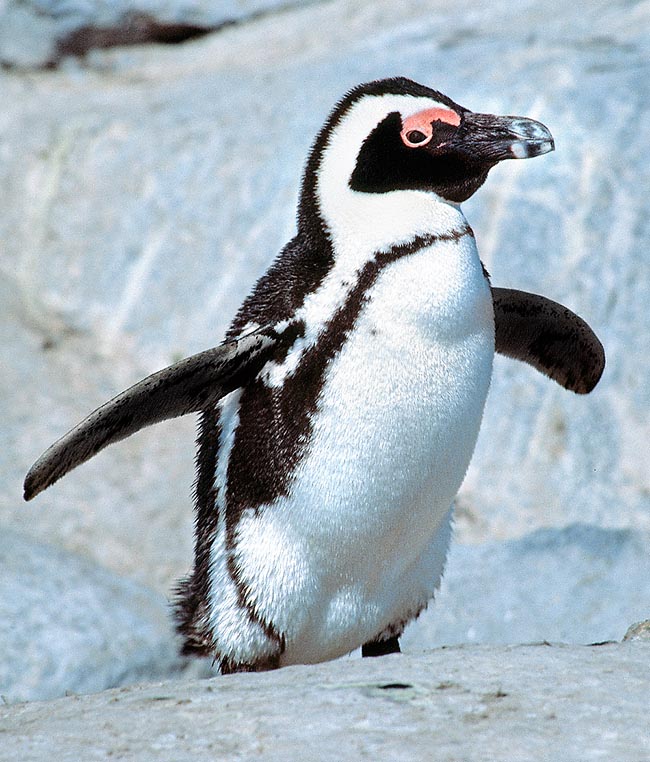 Here it is, about 71 cm tall in the typical white black penguin’s tailcoat, with short, dark and webbed feet, robust and slightly curved beak, spiny tongue suitable for holding the seized fish and wings reduced to muscular stumps used for literally “flying underwater” with incredible 2-3 minutes apneas, up to 30 m of depth © Giuseppe Mazza

Like all penguins living outside of the traditionally icy areas, also this species has the particularity of having a small size and with typically penguin livery but has a rather whimsical characteristic that distinguishes it from any other and that have deserved it a nice reputation.

This penguin heehaws, in the real sense of the word! It emits a sound so much similar to the bray of the donkey that locally it is rightly known as Jackass penguin.

In other nations it keeps in the name the geographical reference of the famous South African Cape or as Germans and Afrikaans do, of the facial drawing similar to glasses.

Being Jackass penguin in English, in Afrikaans original language in those regions, Brilpikkewyn, in German Brillenpinguin, in Spanish Pingüino de El Cabo, in French Manchot du Cap and in Portuguese Pinguim do cabo.

The etymon of the scientific name is, as often occurring, in part of ancient Greek derivation.

Spheniscus from “sphenos” = wedge, due to the tapered shape of the wings that look like fins of a big fish and “demersus” from the homonymous Latin term with meaning of plunger, diver.

This species is confined on the south-western African coasts with northern limit in some islands offshore Namibia and southern on the coasts of South Africa, with eastern limit the city of Port Elizabeth.

Like all similar, also the Cape penguins live in very numerous colonies, thing that, even if ensuring them a certain security against possible predators, puts them, on the contrary, in serious danger when the environmental conditions of sudden changes of the environment or accidents with possible pollutions, may put in serious danger the survival of an entire population.

Nowadays, only a thirty colonies do exist in the whole Africa and in fact for this reason the species is considered as in high danger, because of the concentration of the species in so limited territories. 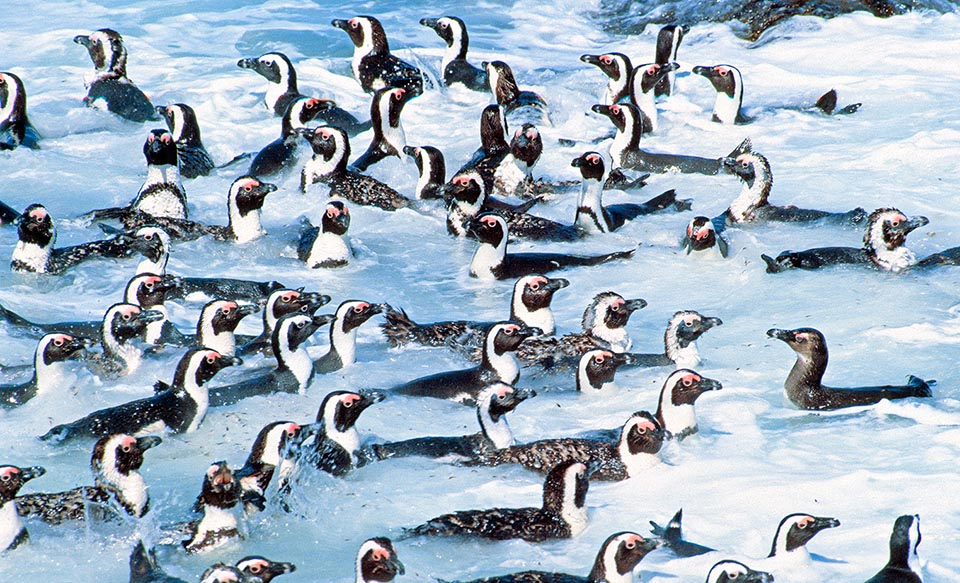 The ocean is its habitat. When is fishing in school, the webbed leg, placed well back, are a good propulsion engine for reaching the respectable speed of 30 km/h © G. Mazza

We have to add the strong pressure to which are submitted some colonies by the mass tourism that, even if discreetly regulated, does not facilitate the peace of this bird, in particular during the period of reproduction.

The sites inhabited by these penguins are usually rocky territories, arid and without tree cover. Many colonies are located, when suitable to their exigencies, on islands not reachable by terrestrial predators and closer to the fishing place but are also present on the mainland, when the insular space is not available. 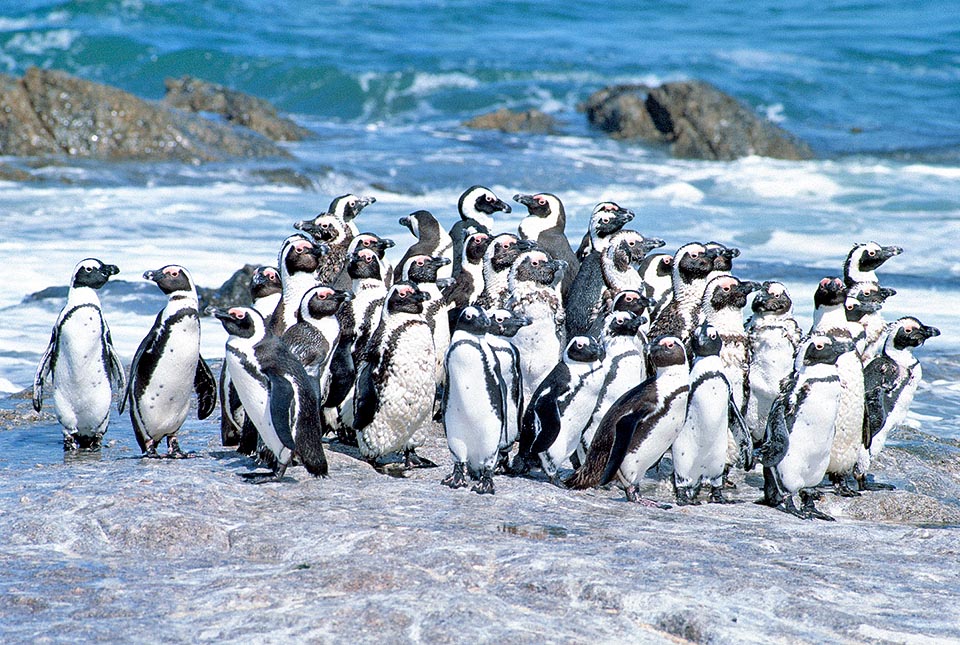 Their natural habitat foresees also the presence of a sufficiently soft ground where is possible to dig the dens where they will place the nest, shelters that they will defend tenaciously against occupations by possible antagonists.

Being an apterous bird, it cannot live far from the sea, an unbreakable bond from which depend its survival and that of its progeny.

Most of the time is spent in the water and also during the period of nesting, in turn, the partners spend part of the day in the sea, leaving the consort in the den hatching the eggs or managing the just born small. 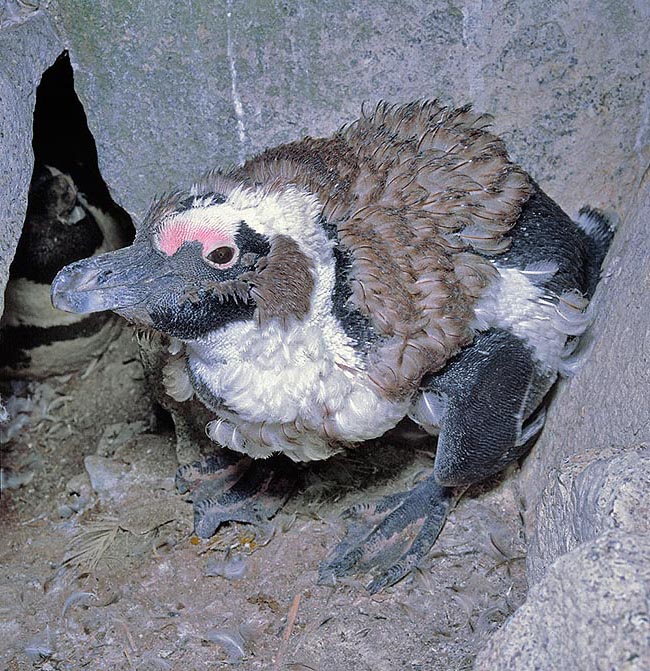 Here an adult in full molt. This delicate phase, lasting about 21 days is preceded by a fattening period in the surrounding rich of fish waters gulping down even half a kilo of anchovies per day for about three weeks. Then, when the molt is completed, it has been noted that they need about forty days to recover the inevitable loss of weight, before to say goodbye for months to the mainland and leave again vigorous towards the open sea © Giuseppe Mazza

The livery of the African penguin is very similar to that of many other species. The typical white black tailcoat, dark, short and webbed feet, robust and slightly pointed beak, spiny tongue good for holding the seized fish, non-pronounced sharp tail and of course, no feathers that might tempt it to take the flight.

The wings are now reduced to robust stumps that serve, when in water, to give speed to swimming and when ashore to wiggle them back and forth like a toy soldier, to impress a balanced rhythm to its awkward walk. In this purpose, the legs are placed quite backwards in way that they may serve as a real propulsion engine.

Naturally, when stopped it stands in perfectly erect position, resting on the soles of the feet and balanced on the rigid feathers of the tail like a tripod; conversely, while resting, it lies directly on the belly on a prone position, in the same was as when it is hatching.

When in water, the penguin is not a bird anymore but practically becomes a big fish with muscular wings that transform for this purpose in real fins that can impress unimaginable speed to this animal.

In fact, the wings are shaken underwater as if it was flying, impressing of course due to the high friction a lower rapidity but that reaches always the respectable speed of about 30 km/h.

The dimensions are quite respectable: it has a length of about 70 cm and a weight reaching the 3 kg. The colour of the livery is black on the back and white on the belly, with two vertical stripes that stretch on the sides up to the legs and that merge on the throat creating an ample nice collar. The black drawing on the chest is unique and is practically identifier of each single individual, as is they were fingerprints. 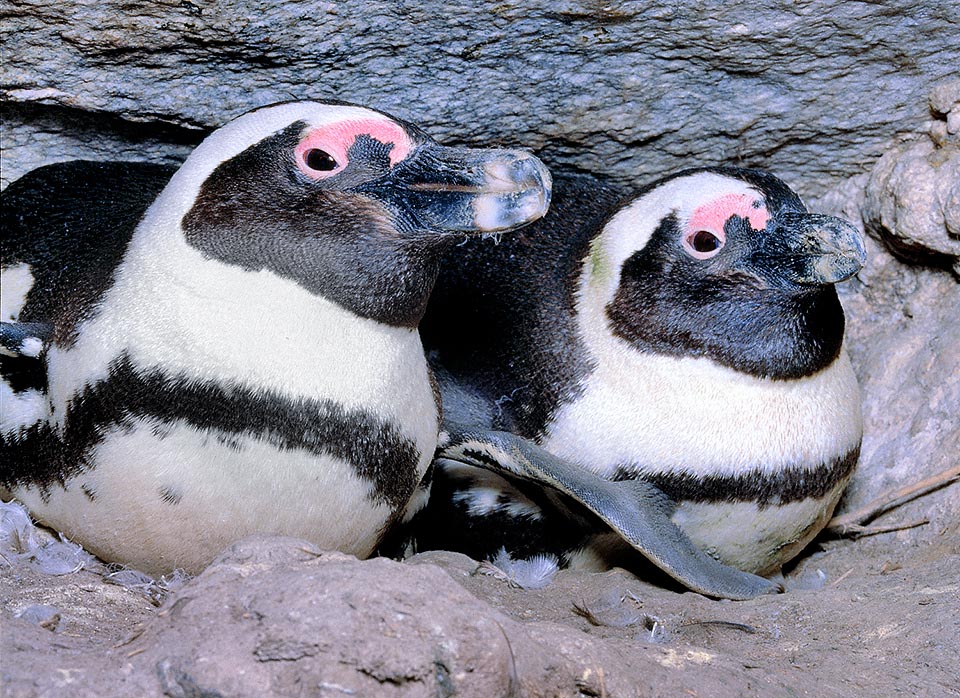 This is instead a couple in the nest dug under a rock. The union lasts for all the life, even after the nuptial period, even if some partial absences caused by the fishing, in order to put on some weight, but always inside their own colony. The females lay two white big eggs, hatched by both parents for a period lasting about 40 days. They are very tasty and between the years 1917 and 1927, before that a law would put an end to the looting, they were collected by the locals at the rhythm of 500.000 per year © Giuseppe Mazza

The head is white crossed by a central line uniting the beak to the nape and by a totally black chinstrap.

The eyes are black and contoured by a very white ocular border similar to glasses, surmounted in their turn by a slight pinkish eyebrow.

There is not a neat distinction between the sexes except for the dimensions slightly more robust in the male and in the beak, slightly longer, but also the young after a few weeks look like the adults.

The African penguin is monogamous and its union last all the life long. The couple remains linked even after the nuptial time even if there is a partial absence, but always inside the colony to which the couple belongs. When the reproduction period gets closer, it forms again immediately, originating a normal life of couple. 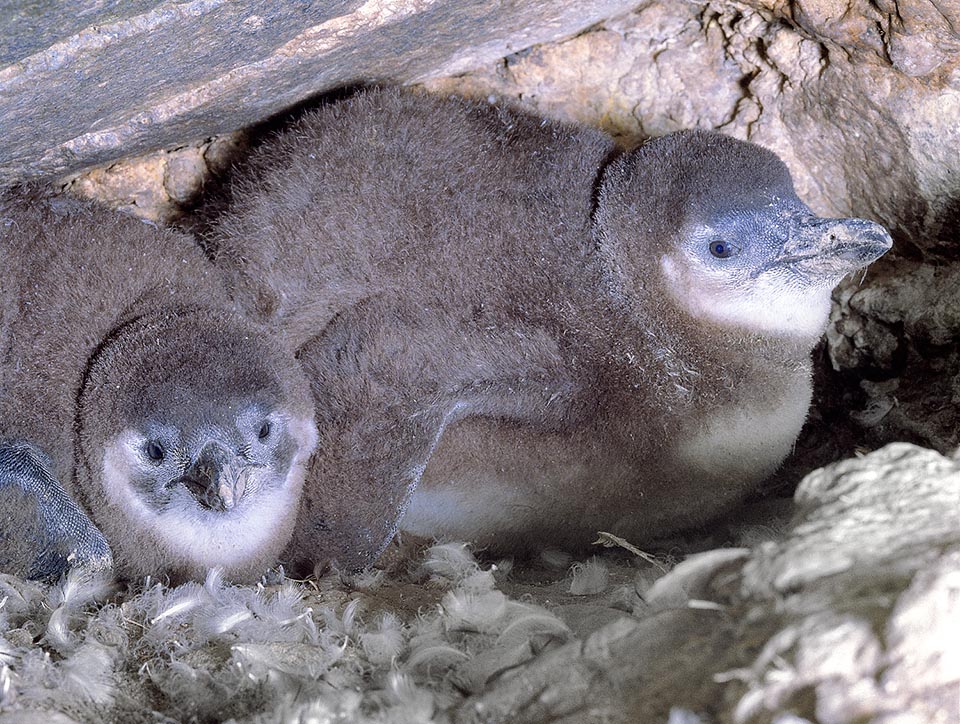 The chicks remain in the nest for about one month fed by the parents, then, brave, get out forming with those of the same age compact and noisy colonies waiting for food © Giuseppe Mazza

The dens are occupied year after year but not always by the same couple, whilst the young independently provide to dig their own one.

This species lays two white eggs of remarkable size that are hatched by both parents for a period of about days. The chicks stay holed up in the nest till when they are sufficiently strong to get out and resist to the local climate conditions that often have temperatures rising to scorching levels.

In this period the small form compact and vociferating colonies and keep constantly in the open air waiting for the visits of the parents that alternate between sea and land to carry them the food. Only after a period varying from 10 to 15 weeks they are ready to face the sea and to become totally autonomous. 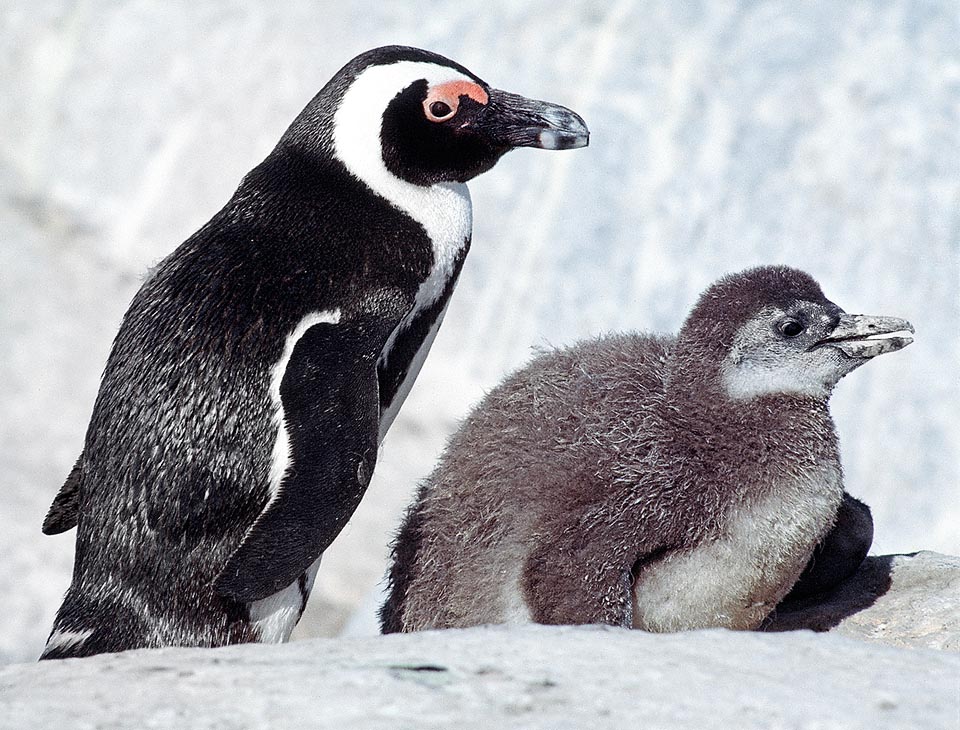 Besides the natural predators, sharks, killer whales and sea lions, the species is seriously menaced by the industrial fishing of anchovies. From density estimations done based on old photos, it is clear that by the beginning of the twentieth century in Dassen Island where at least 1.500.000 specimens, versus the present 60.000 © G. Mazza

Their diet is based uniquely on fish, mollusks and crustaceans, very abundant in those stormy waters.

When in water the Penguin has many foes. Sharks, killer whales and sea lions are very frequent in the Atlantic and Indian Oceans in their meeting point, in face to the South African coasts. The richness of fish necessarily creates a natural food chain that sees the hierarchical presence of a whole series of predators, including, of course, those great big carnivorous mammals that are on the top of this chain.

However, it is not easy even for them to hunt these darting birds, hence the impact is essentially zero if compared to the total number of the presences. The species is strongly protected even if not in immediate danger.