The domestic pig (Sus scrofa domesticus Linnaeus, 1758) is one of the animals with major geographic distribution, as it is raised nowadays in Europe, Asia, Africa and Oceania.

Biologically, the pig comes from the wild boar (Sus scrofa), from whose domestication and breeding, started thousands of years ago, they have selected, due to the loss of wild characters and to the birth of domesticated characters, all present forms of tamed hogs. Studies of ethno-zoology done by the biologists and of archaeology by the archaeologists, have led to hypothesize that the domestication of the pig has begun in China about on the 5.000 BC; and maybe also due to this, the pig in such country is one of the most consumed aliments.

The breed Sus scrofa domesticus, thanks to the farming, initially empirical, then rationalized with the zootechny in agriculture, has produced, by diversification, several races or subspecies or even varieties or sub-races; this is a sign of a phenotypic-somatic polytypicization. The same phenomenology which has characterized the genus Bos (Bos taurus) for the tamed bovines, the same for the sheep, the goats, as well as for the chickens, the geese and the domestic turkeys, the list is long.

As for the other tamed species, also for the Sus scrofa domesticus it may happen that some specimens escape from the domestication and go back to nature, recovering partially the wild characters, thus forming the so called feral animals. 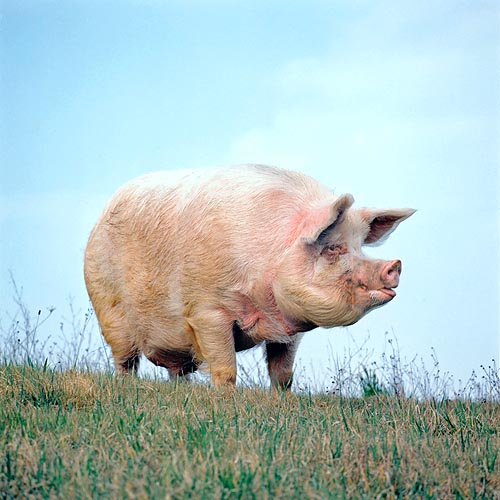 In the past, mainly during the XIX century, in Europe, but also in North America and in Asia, there was the tendency to free spontaneously heads of tamed pig, for leaving them to grow up, wild, in woods and forests, thus contributing to the re-population of Wolves (Canis lupus), Foxes (Vulpes vulpes), Lynxes (Lynx lynx) or Glutons (Gulo gulo) and Tigers (Panthera tigris) which made their prey of choice of these animals.

But this contribution to the re-population of these wild species, was not, unluckily, looking to the biologic-ecologic re-balancing of the declining local fauna, but mainly to guarantee a sufficient density of their population for gaming. All of them, the hog as well as the fox, the wolf, the tiger, etc. were therefore sacrificial victims for the human hunting/recreating aspects.

On the alimentary point of view, the flesh of the pig, so rich of proteins and lipids, tasty and suitable for countless culinary produces, had all the necessary requisites, for getting into the favour of the human gastronomy. And if we add the high birth rate of the species, its remarkable biologic resistance, the facility of farming even in modest structures, taking advantage that it nourishes practically of everything, we understand easily how the pig has quickly reached a popularity similar to that of the chicken, if not even more.

In some countries, especially in Indochina, it is also utilized as ornamental animal in gardens and courtyards, like geese and ducks; in other countries, like those of Muslim religion, seen the promiscuity of this animal species and the scarce hygiene characterizing it, the consumption of its meat and by-products, is forbidden for religious reasons. The sexually mature male of the pig, that is the reproducer, is called “boar”, the sexually mature female that is the breeder, is called “sow”, the new-borns, “piglets”.

Depending on the purpose for which they are raised, there is an important aptitudinal subdivision for the pigs, which makes the distinction between light swine and heavy swine. The first one is butchered when it reaches a maximum of 100-110 kg of live weight, the second, between the 150 and the 180 kg (as an average, around the 160 kg). The raise of the heavy swine is specific Italian and less in Spain, because these are the only countries specialized in the production of hams. The remainder of the western world raises only light swine.

Several races exist also between the pigs, which are classifiable on the base of other aptitudes, which differ from those considered in the bovines, as they have different finalizations. In fact, there are races for the production of meat, with tendency to the fattening and races for the production of bacon, called baconers, typical of the Anglo-Saxon countries; these last ones develop more the muscular component that the fat mass, and therefore, for such reason, are subjected to diets rich in proteins. 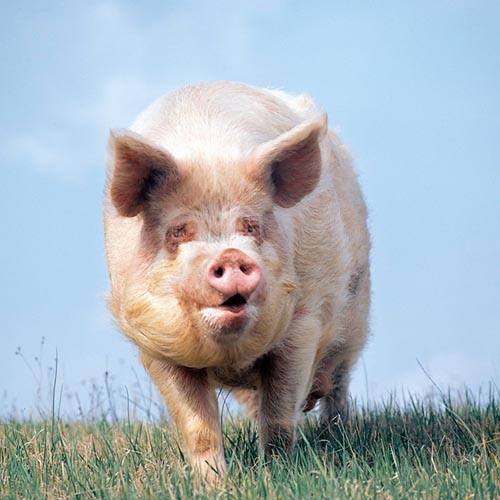 Cosmopolitan domestic breed, present in all stock farms of the world; in some geographic areas, some specimens may return to the wild status, and are called feral animals.

In the farms, they may share an open air pigsty and common stable where they shelter during the night and the winter. The feral specimens tend to live in the thicket, in the bush and in the woodlands.

Animal of firm structure, even if rather short at the withers, where it reaches the 120-130 cm. Skull and skeletal structure vary depending on the race and on its aptitude. In general, it has ears with a developed auricle, placed over the head and drooping before the eyes; these ones are small, frontally located, with eyelid; they have a very developed nose which is part of the snout, with big nostrils. The smelling and hearing are well developed, the eyesight less.

If compared to the Wild boar (Sus scrofa), the domestic pig has a more developed skull, a heavier structure, less developed canines and ears with prolapsed or drooping auricles before the eyes; in the wild boar, on the contrary, the ears are equipped with smaller but erect pinnae, which guarantee a better hearing, the sense of smelling is more developed, and the eyes are bigger, finally, the tusks are much more developed. These differences probably come from the fact that with the domestication, the pig does not need any more to be alert for escaping a predator, and doesn’t need to go looking for food.

The weight can vary, depending on the sex, race and aptitude; there are, therefore, specimens who, in farming, reach the 120 kg, others may reach the 500 kg.

They have four robust limbs, each foot has four toes, the first and fourth are shorter and raised, the second and third are well developed and are those on which the weight rests; they are Artiodactyls (Artiodactyla). The mantle is bristly with a colouration varying from the flesh-pink with different typologies of dappling: black-white, reddish-white, up to the full black or the white, depending on the race.

They have a small, curly, tail ending with a small tuft of hair. They have a heterodont dentition, the molars have low crowns “brachydont”, the canines and the incisors are developed; this dentition identifies an omnivorous diet. Those in stable are often nourished with the wastes of the cereal and daily farming industries (more specifically, the whey is utilized), besides specific fodders based on vegetal or fish flour. In any case, the alimentation varies depending on the type of meat which is to be produced. 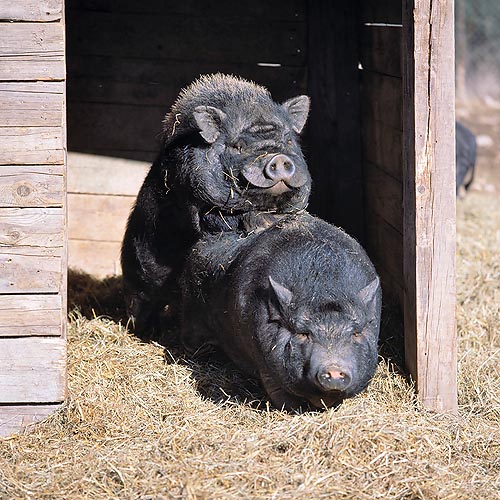 In the case, for instance, of pigs apt to produce meat for consumption, the alimentary cycle varies depending on the phases of development. The sucklers (young specimens with a weight from 20 to 40 kg) are given aliments rich in proteins, mineral salts and vitamins, with the purpose to well develop the skeleton of the growing up animal.

The so-called baconers (those for the production of bacon), with a weight from 70 to 100 kg, are given diets which stimulate the development of the lean mass (musculature), skeleton and digestive apparatus.

Finally, to those utilized for the production of sausages (with big fat mass), is given a diet rich of bran, whey and various flours.

The boar (the reproducing male pig) reaches its sexual maturity when 8-10 months old; the sow (pig female, breeder) is in condition to farrow (ovulate) from the 10th, or 12th month of life. The gestation, as an average, lasts 105-125 days, and the number of the newborns goes from a minimum of 5 to a maximum of 15 (in some cases, we can reach the 16-17 sucklers), usually, as many as are the udders for getting the milk. This because the pig female is a poly-ovulating, or polytocous, species; it may happen that a number of sucklers come to life superior to the number of udders, this means that the weakest will never reach a teat from where to nourish, as a consequence, should they not be milked artificially, as it happens in the farming, they would die.

The fact that the sow is poly-ovulatory means that for each oestrum cycle, the ovaries of the female are in condition of having more follicles maturing at the same time, where there is not one specifically dominating, therefore, at the same moment, more oocytes are produced, and these are fertilized at the same time by the spermatozoon, generating pluri-gemellar, or multiple, deliveries. The sucklers, however, are not real twins, as they are not monovular, that is “homozygote”, but, as they come each one from a specific fecundated cell, they are poly-ovular, that is, heterozygote.

Typical is the fact that the pregnancy in the sow, whatever produced by natural intercourse of by artificial insemination (IA), activates only if there is the production of the same number, or more, of 4 embryos (zygotes), planted at the same time, otherwise the animal will abort. This is in fact the minimum necessary value in order to get an endocrinal gradient (estrogens, progesterone and other reproduction hormones), able to start and carry on the pregnancy. During the heat time, the boars may become very aggressive; it is not rare to see them attacking the female if this one is not keen to coupling.