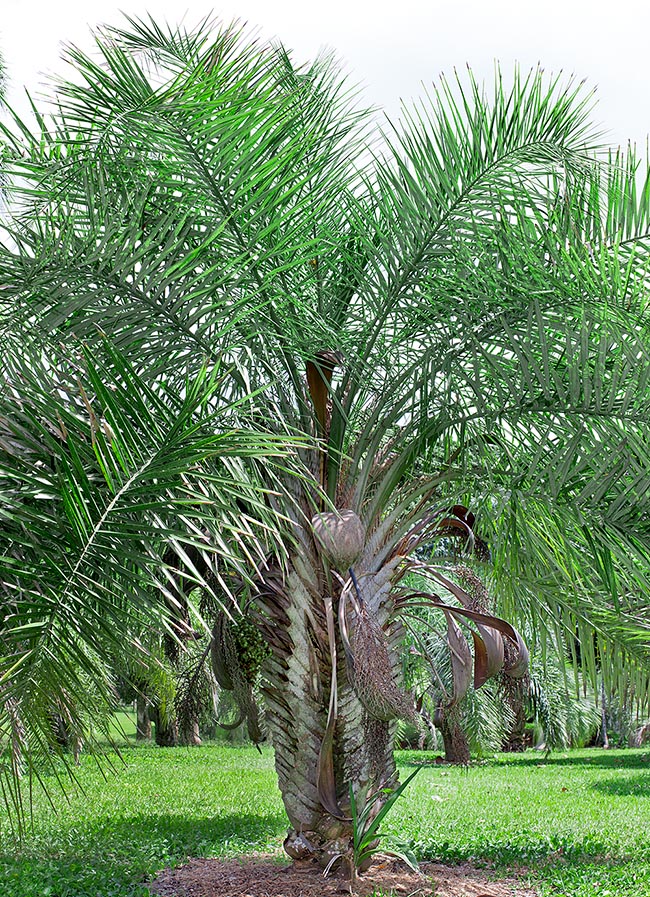 Native to Brazil, Syagrus coronata is a slow growing palm, very ornamental, due to the particular arrangement of the leaves. The 6-12 m stem is mostly covered by the foliar bases arranged helicoidally in five rows © Giuseppe Mazza

The species is native to Brazil (Alagoas, Bahia, northern Minas Gerais, Pernambuco and Sergipe) where it mainly grows in the dry forest, locally known as “caatinga”, and marginally in the savannah (“cerrado”) and in the coastal rainforest (“restinga”).

The exact derivation of the generic name is unknown, the most accredited hypothesis is that it comes from the name “syagrus” given by Pliny the Elder (23/24 AD – 79) to a variety of date palm; the name of the species is the Latin adjective “coronatus, a, um” = crowned, wreathed, with reference to the persistent residues of the foliar bases arranged helicoidally in five rows.

The Syagrus coronata (Mart.) Becc. (1916) is a monoecious species with erect solitary stem, cylindrical, 6-12 m tall and of 20-28 cm of diameter, covered for a large extent under the crown by the residues of the foliar bases arranged helicoidally in five rows, of greyish color and with the prominent annular scars of the junction of the leaves in the oldest part.

The leaves, on short petiole, arranged as aforementioned, are pinnate, 2,5-3 m long, with 90-120 pairs of rigid, linear leaflets, with acuminate apex, in the central part 35-40 cm long and 2-3 cm broad, arranged on the rachis in groups of 2-5 on various angles, of dark green colour above, bluish green and covered by whitish waxy patina below; foliar bases and petioles provided on the margins of flat woody fibres 2-5 cm long.

Inflorescences between the leaves (interfoliar) of yellowish color, about 90 cm long, initially enclosed in a woody spathe externally tomentose, with ramifications of first order and unisexual flowers arranged in triads (one female flower between two male), but in the terminal part of the rachillae where are present only male flowers solitary or in couple. 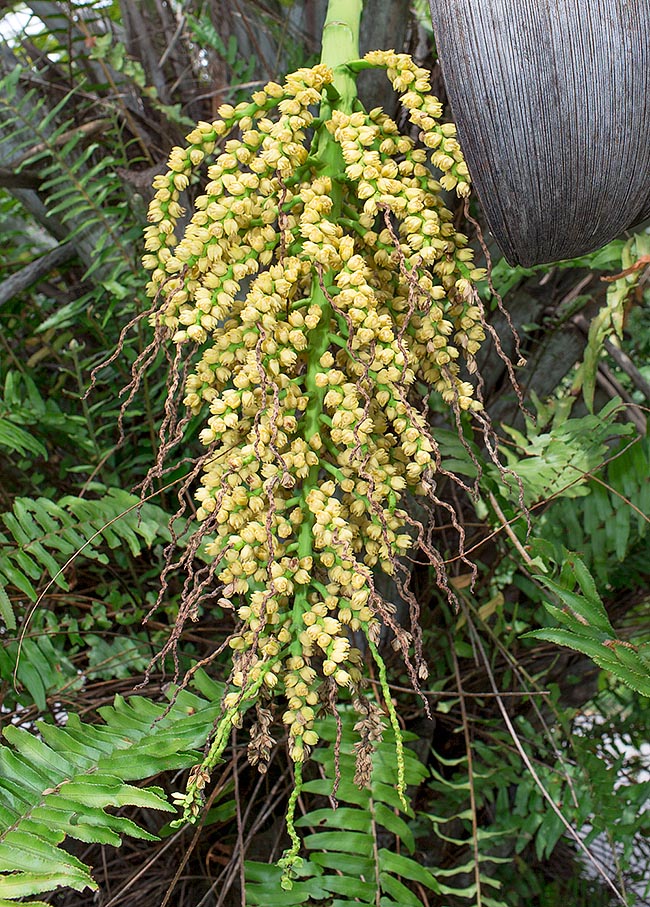 Yellowish inflorescence of about 90 cm with male and female flowers. On the right, the woody protective spathe © Giuseppe Mazza

It reproduces by seeds, previously kept in water for 3 days, in draining loam maintained humid at the temperature of 26-28 °C, with germination times starting from 2-4 months.

Slow growing palm, very ornamental for the particular layout of the leaves, cultivable in the tropical, subtropical and marginally warm temperate climate regions, where when adult may resist temperatures up to -3/-4 °C, if exceptional and short lasting, with possible damage to the foliage.

Requires full sun, but in the initial phase of growth when needing partial shading, and adapts to various types of soil, fertile and deep to poor stony and rocky, provided draining, not bearing water stagnations, resists long periods of drought, but grows faster if regularly watered in the climates characterized by a long warm and dry season.

The species plays an important role in the life of the populations living in the semi-arid environment of the “caatinga”, where it may happen that it doesn’t rain for several years, and for the fauna, in particular from its fruits depends the survival of the Indigo macaw Anodorhynchus leari, a parrot at extremely high risk of extinction.

The fruits, with fibrous yellow pulp rather sweet and rich in β-carotene, are consumed fresh or for preparing juices and ice-creams, as well as the oily endosperm, utilized also in various dishes of the local cuisine and for producing margarine.

The oil, besides for feeding, is employed in the soap industry and has good characteristics for a possible use as biofuel.

The old leaves are employed for the covering of rural dwellings and the young ones for making various handicrafts, hats first, and brooms, fans, baskets, mats, etc., that represent also a small economic resource, and in feeding the cattle, the dry leaves are furthermore utilized as fuel. 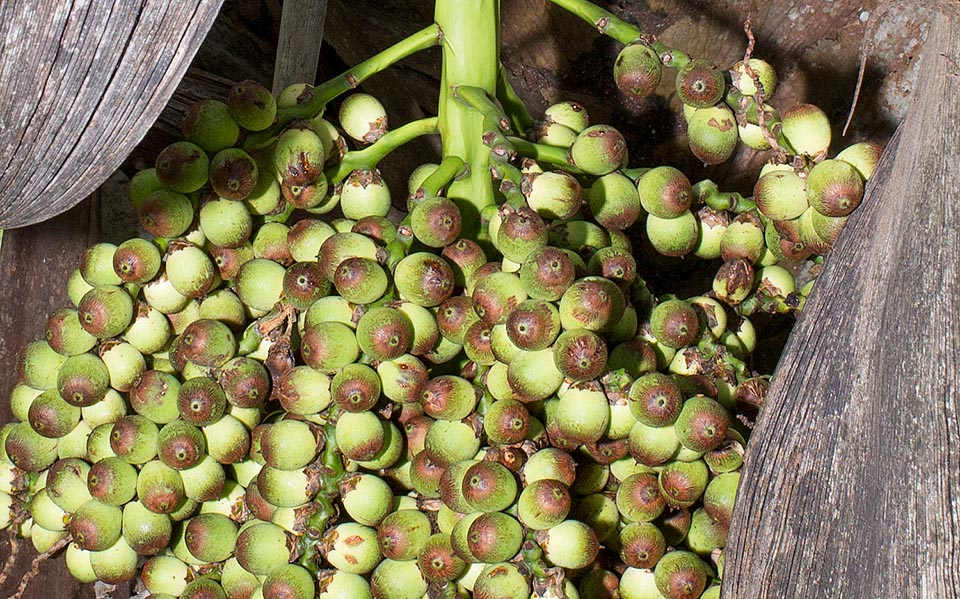 The fruits are edible and fundamental for the survival of the Anodorhynchus leari, a parrot at extremely high risk of extinction © Giuseppe Mazza

The wax, with characteristics similar to that gotten from the leaves of the Copernicia prunifera, known as “carnauba”, is utilized in the shoe polishes and in paints for furniture and cars.