The species is native to Bolivia, Brazil (Bahia, Ceará, Espirito Santo, Goiás, Mato Grosso do Sul, Minas Gerais, Paraiba, Paraná, Rio de Janeiro and Sao Paulo) and noth-eastern Paraguay where it grows in the semideciduous forest and in the savannah (“cerrado”) between the 400 and the 1000 m of altitude.

The exact derivation of the generic term is unknown, the most accredited hypothesis is that coming from the name “syagrus” given by Pliny the Elder (23/24 AD – 79) to a variety of date palm; the name of the species is the Latin adjective “oleraceus, a, um” = similar to vegetables, with reference to the edible vegetative apices (“ hearts of palm”).

The Syagrus oleracea (Mart.) Becc. (1916) is a monoecious unarmed species with solitary stem, erect, columnar, slightly enlarged at the base, 15-20 m tall and of 20-30 cm of diameter, of greyish white color, slightly marked by the annular scars of the junction of the fallen leaves and vertically fissured, covered for short under the foliage by the residues of the foliar bases. 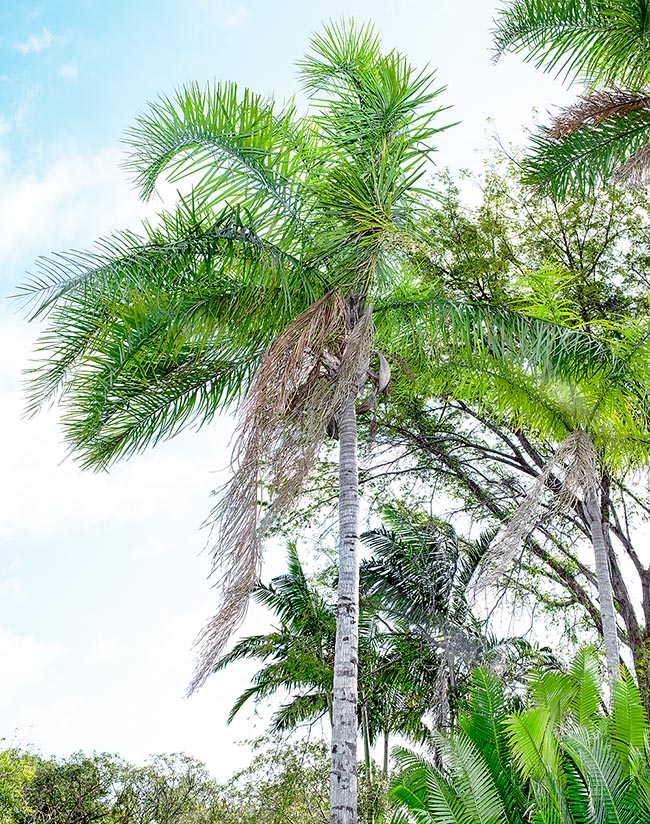 Native to tropical America, the stems of Syagrus oleracea reaches the 20 m of height with 20-30 cm of diameter. It is cultivated as vegetable due to the vegetative apices. The fruits are edible and give an eatable oil © Giuseppe Mazza

The leaves, 2-3,5 m long, are pinnate, slightly arcuate, with 90-160 pairs of linear leaflets with acuminate apex, rigid, arranged on the rachis in groups of 2-5 on various angles, 30-60 cm long and 2,5-4 cm broad, of dark green color above, glaucous green below; foliar bases and petiole, 0,5-1,5 m long, with fibrous margins.

The inflorescences, on a 20-50 cm long peduncle, generate among the leaves, 40-90 cm long, of yellow colour, initially enclosed in a woody spathe of brown color, with ramifications of first order and unisexual flowers arranged in triads (one female flower between two male), excepting in the terminal part of the rachillae where are present only male flowers solitary or in couple.

It reproduces by seed, previously kept in water for 3 days, in draining loam maintained humid at the temperature of 26-28 °C, that germinates starting from 2-3 months.

Species standing among the most ornamental of the genus, amply utilized in the origin zones as ornamental in parks, gardens and as road tree, is furthermore locally cultivated for the vegetative apices, sourish, taken from 2-4 years old plants and consumed after boiling, very much appreciated in some regional cuisines, in this way are safeguarded the natural populations, seen that such use causes the death of the plant.

Also the fruits are marketed, for the pulp, little fibrous and sweet, as well as for the oily endosperm, white, of pleasant taste, the oil gotten from it, of excellent quality for food use, can be employed in the soap industry. The fruits are also an important food source for the local fauna.

Outside the places of origin, it is rarely present in the gardens, being much more preferred the Syagrus romanzoffiana, of similar appearance, but with thicker foliage, due to the easy of cultivation and the greatest rusticity and growing speed. Cultivable in full sun in the tropical, subtropical and marginally warm temperate climate regions where it can resist for short time to temperatures up to about -3 °C. It adapts to various types of soil, sandy to stony, provided deep and draining, preferably acidic to neutral, and can bear short dry periods, but takes profit from regular watering in particular during the juvenile phase.

Syagrus oleracea was last modified: May 18th, 2019 by Peppino