The species is native to Brazil (Bahia, Espirito Santo and Rio de Janeiro) where it grows mainly in the coastal rainforest (Mata Atlantica) on steep slopes of granite rocks.

The exact derivation of the generic term is unknown, the most accredited hypothesis is that it is coming from the name “syagrus” given by Pliny the Elder (23/24 AD – 79) to a variety of date palm; the specific name is the combination of the Greek adjective “πικρός” (pikrós) = bitter and of the substantive “φύλλον” (phyllon) = leaf with probable reference to the bitter taste of the vegetative apices (“hearts of palm”). 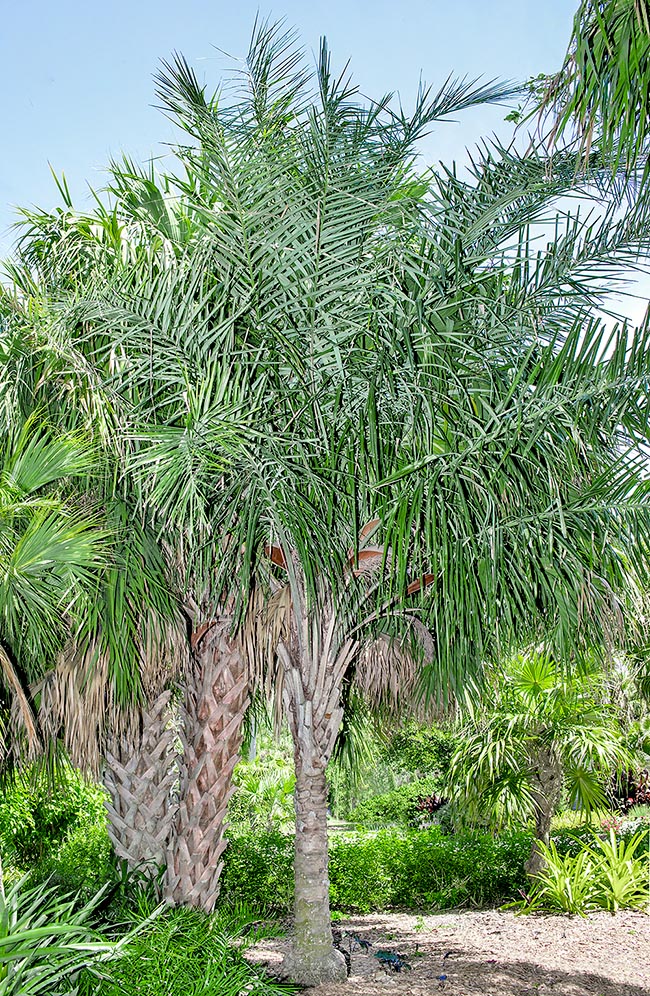 Native to Brazil, the Syagrus picrophylla has a 3-7 m stem, 15-25 cm broad. The fruits are edible, with fibrous pulp, but of sweet taste. Introduced only recently in cultivation, it resists for short periods at about -3 °C © G. Mazza

The Syagrus picrophylla Barb.Rodr. (1879) is an unarmed monoecious species with erect stem, columnar, enlarged at the base, 3-7 m tall and of 15-25 cm of diameter, greyish with prominent annular scars at the the junction of the fallen leaves, but for a short space under the crown where is covered by the residues of the foliar bases. The leaves, on short petiole, are pinnate, 2,5-3,2 m long, with 90-160 pairs of linear leaflets with acuminate apex, rigid, irregularly arranged on the rachis in groups of 2-4 on slightly different angles, in the median part 40-60 cm long and 2,5-3,5 cm broad, of intense green colour above, pale bellow; the foliar base, 1-1,5 m long, of green colour, has fibrous margins.

Inflorescences on a 40-60 cm long peduncle, between the leaves, 60-80 cm long, of yellowish cream colour, initially enclosed in a woody spathe of orange colour, with ramifications of first order and unisexual flowers arranged in triads (one female flower between two male), but in the terminal part of the rachillae where are present only solitary or coupled male flowers.

It reproduces by seed, previously kept in water for three days, in draining loam maintained humid at the temperature of 26-28 °C, that germinates starting from 2-4 months.

Practically unknown in cultivation till the second half of the XX century, also due to the difficulty in getting the seeds, the rough places where it grows in nature, it can be employed as single specimen, in group or as road tree in the regions with tropical, subtropical and marginally warm temperate climate, where adult specimens can resist temperatures up to about -3 °C for a short period.

It requires full sun, but in the initial phases of growth when it needs partial shade, and is not particular about the soil, even if poor and rocky, but grows more luxuriant in fertile soils regularly watered in the climates characterized by long warm and dry summers. The fruits are edible, with fibrous pulp, but of sweet taste.