The species is native to Brazil (Maranhão, Pará, Rondônia e Tocantins) where it lives in the semideciduous forest and of transition with the Amazonian pluvial one, on clayey oils, between 100 and 300 m of altitude.

The exact derivation of the generic name is unknown, the most credited hypothesis is that it comes from the name “syagrus” given by Pliny the Elder (23/24-79) to a variety of date palm; the specific name is the Latin adjective “vermicularis, e” = vermicular, that looks like a small worm, with reference to the extremities of the rachillae devoid of flowers and tangled like an intricate mass of worms.

The Syagrus vermicularis Noblick (2004) is an unarmed monoecious species with solitary stem, erect, columnar, up to 15 m tall and 20 cm of diameter, smooth, of green colour and covered by a dense whitish down that with the time disappears in the youngest part, greyish in the oldest one, marked by the spaced annular scars of the fallen leaves.

The leaves, on a 0,5-1 m long petiole, are pinnate, arcuate, up to about 2,5 m long with 100-140 pairs of linear leaflets with drooping acuminate apex, distributed along the rachis in groups of 2-3 at different angles, in the central part 80-90 cm long and 3-4 cm broad, of glossy intense green colour. The foliar sheath, 60-80 cm long, opens on the side opposite to the petiole, displays fibrous edges and is covered, as well as the petiole, by a whitish down precociously deciduous. 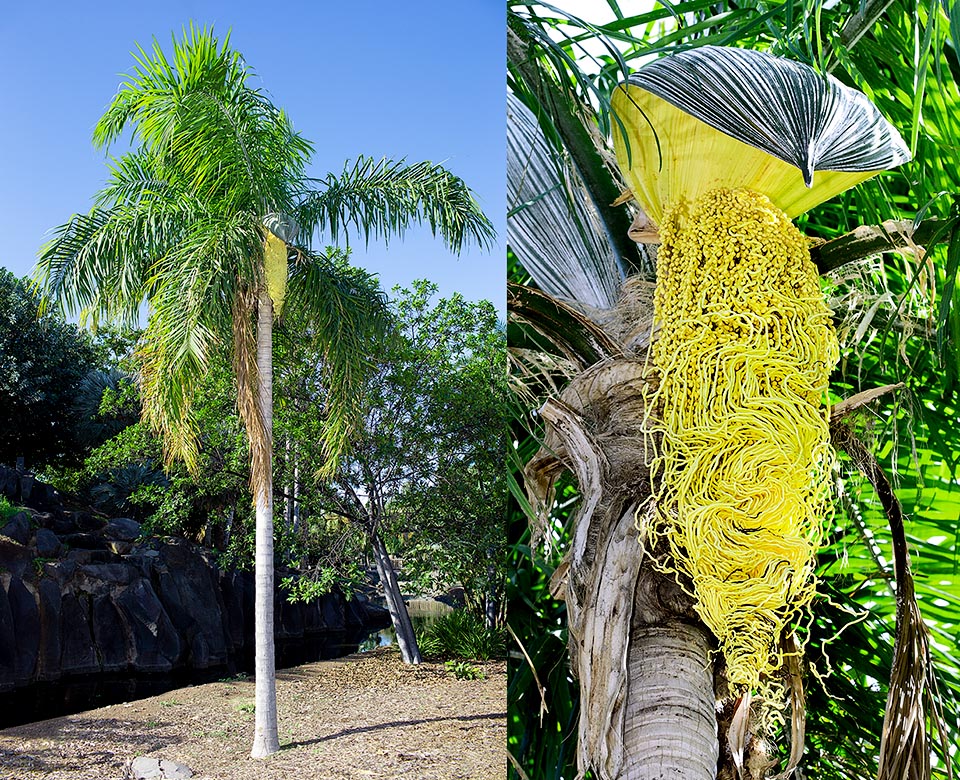 Described only in 2004, Syagrus vermicularis is a Brazilian up to 15 m tall species with quite particular inflorescences. The woody bracts, striped outside and even 1 m long with a 4-5 cm beak, bear in fact, only instance in the palms, rachillae without flowers in the terminal part, entangled together like an intricate mass of worms. The fruits, that consequently grow only at the base, are edible, important source of food also for the local fauna. Fast growth, with good resistance to cold and drought © G. Mazza

Inflorescences, on a 30-60 cm long peduncle, between the leaves (interfoliar), 60-90 cm long, initially enclosed by a woody bract, up to about 1 m long, thick, provided at the apex of a 4-5 cm “beak”, greyish and striped externally. Ramifications of first order with unisexual flowers of yellowish colour arranged in triads (one female flower between two male ones); the terminal parts of the numerous rachillae, completely devoid of flowers, are folded on themselves and entangled like a mass of worms. Ovoid fruits, up to about 6 cm long and of 4 cm of diameter, orange when ripe, with fibrous mesocarp and ovoid endocarp, bony, of reddish brown colour, about 5 cm long and of 3,5 cm of diameter.

It reproduces by seed, previously kept in water for 3 days, in draining loam maintained humid at the temperature of 26-28 °C, with germination times starting from 2-3 months.

This species with the particular inflorescence, unique in the genus, discovered in the end of the XX century and officially described in 2004, represents one of the most significant events of the last times within the Arecaceae. Slender species, elegant and fast growing, surely deserves a place in the gardens of the tropical, subtropical and mildest warm temperate climate zones. It needs full sun, or at most a slight shade during the juvenile phase, and is not particular about the soil, provided perfectly draining. Well rooted, it can stand short periods of drought, but takes advantage from regular watering in the climates characterized by long periods of dry heat; furthermore, it displays a good resistance to the strong winds. The fruits are edible and at times are consumed by the local populations, they are also an important source of food for the local fauna.