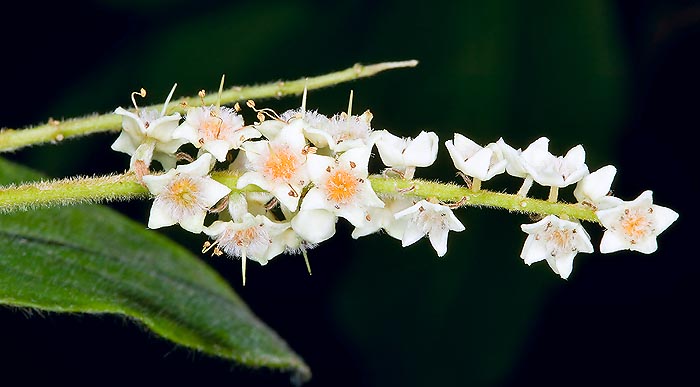 The plant is native to Australia (Queensland), where it grows mainly in the coastal forests or on the dunes by the sea.

The name of the genus comes from the Late Latin “terminalis” = terminal, which derived from the classical Latin “terminus” = ending, limit, with reference to the leaves grouped at the extre- mities of the branches; the species is honoured to the German botanist Ferdinand Jacob Heinrich von Mueller (1825-1896), who lived in Australia from 1847 to his death.

The Terminalia muelleri Benth. (1864), is a small deciduous tree, up to 6-8 m tall, with a dark grey rough bark and symmetrical crown with a diameter of 4-6 m, with branches tending to stay horizontal, but the extremities which are turned upwards. It has alternate leaves grouped at the apex of the branches, leathery, obovate, 5-15 cm long and 3-8 cm broad, on a short petiole, pale green with evident nervations on the upper side and prominent on the lower; in the inferior page, at the base of the lamina, are present two gland placed on the sides of the central rib. In autumn, before falling, the leaves get and intense red colouration. 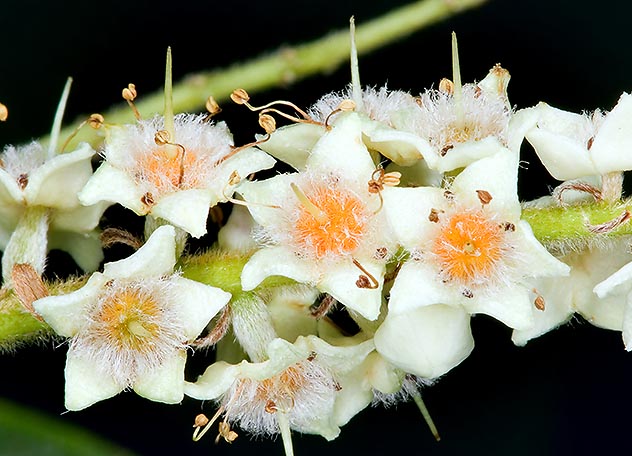 Small perfumed flowers, without petals, formed by the calyx only © Giuseppe Mazza

Inflorescences formed by axillary spikes appear in spring, more or less as long as the leaves, with numerous little (about 6 mm of diameter) greenish-white flowers, much perfumed, formed by the calyx alone, therefore without petals, with triangular lobes, externally smooth, internally tomentose, and 10 stamina longer than the lobes. The dark blue fruits are ovoid, long up to about 2,5 cm, containing one seed only, about 8 mm long and with a diameter of 2 mm.

The fruit is edible, but not particularly appetible. It mainly reproduces by seed.

Little diffused plant cultivable in full sun in the tropical, subtropical and marginally warm temperate climate zones, where it can resist to temperatures as low as -3 / -4 °C for a short time; not much demanding for what the soil is concerned, provided the same is much draining.

It is suitable, due to its rather small dimensions and the regularly shaped crown with its ornamental foliage, to be employed as shadow tree, in the avenues, in patios and small gardens, also close to the sea, as it resists, for short periods, to dryness, wind and salt aerosols.

The leaves contain active principles with anti-bacterial and anti-oxidant, in particular gallic and ellagic acids (also in the fruits).