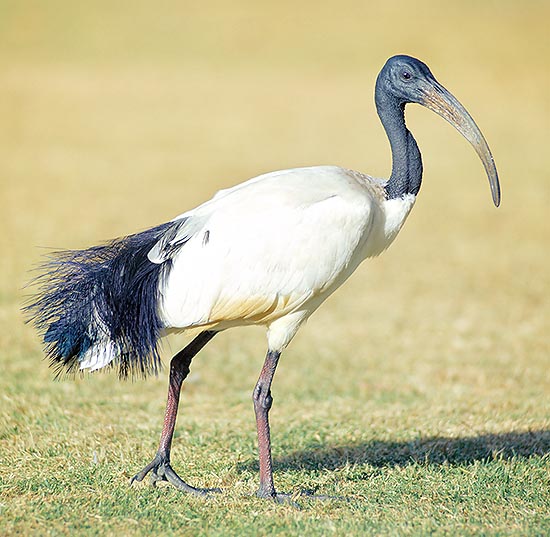 The famous African sacred ibis (Threskiornis aethiopicus Latham, 1790),  is a member of the order of the Pelecaniforms (Pelecaniformes and of the family of the Treskiornitids (Threskihornitidae).

In reality, it is not, a bird distributed only in Africa. In fat, it may be found also in the Arabian peninsula and in Iraq, however the sub-Saharan Africa and the Nile Valley are the areas of main and natural geographic distribution, even if it seems to have almost disappeared from Egypt, where, as the name recites, it was an animal sacred to the Toth and considered able to protect the country and its habitants from plagues, ailments and the serpents’ bite, maybe because it was observed while nourishing of carrions and wastes (and therefore carrying out a preventive action against the spread of diseases) as well as of reptilians (even if marginally).

Populations of this species of ibis are present also in Europe and in America (Florida), but they are, in reality, individuals escaped from the captivity and which, thanks to their great adaptability, have well adapted to their new habitat, often causing the damages typical of the “alien species”.

As an example, in Florida it is considered as an “introduced, invasive and now resident” species, often dangerously competitive to the local autochthonous species, of which it has occupied, “unlawfully the ecologic niche”, and on which, often, finally prevails causing serious damages to the local ecosystem. Probably, the settlement of this bird coincided with the 1992 hurricane called Andrew, which facilitated the escape of specimens from zoological gardens (Miami) as well as from small private zoos. The most endangered species should be, in Florida, the American white ibis (Eudocimus albus) smaller relatives, as size, of the sacred ibis, some species of sea birds and the American Mycteria or Wood stork (Mycteria americana), bird deemed as potentially vulnerable species. 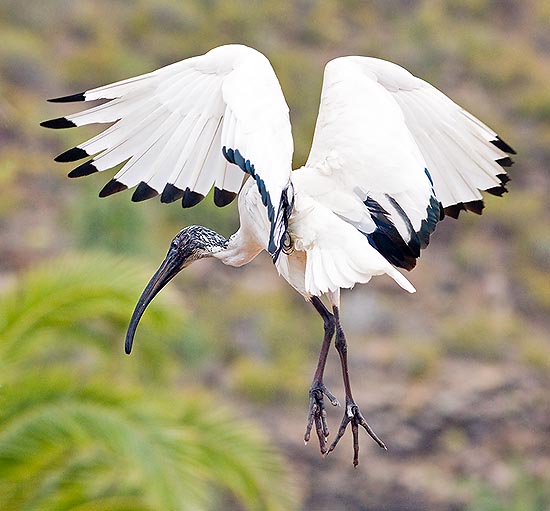 The sacred ibis has successfully settled also in some European countries, such as Italy, France, Belgium and Netherlands; and also in these cases this happened after having escaped from small parks or private zoos, and also in Europe has proved to be harmful.

The fossils found by the palaeontologists rightly lead us to think that it is a winged creature whose origins go back to at least sixty million of years ago and that, therefore, it is one of the most ancient species, if we consider the epoch when the dinosaurs extinguished.

It is a bird of good size, weighing from one to two kilos, a length which may reach the 90 cm and a wingspan of 110-125 cm. It is a bird easy to identify, also for a neophyte, as it is characterized by a white body, on which stands out the black of the neck, which appears “naked”, of the head, the beak, the legs, and the feet and of the extremities of the wings, as well as the caudal part. The beak is long and curved, with the concavity facing down. When resting, we may often see a tuft or swirl of long and morbid feathers, on the back (white) and on the tail (black).

The immature individuals have a plumage similar to the adult but may be recognized for the presence of a light whitish plumage on the neck.

Below, also the belly is candid, therefore, if seen while flying, it appears as a big white bird with neck, beak and black legs and with the tip of the remiges and the back wings margin black. It is, practically, unmistakable. The extremity of the remiges may be, at times, dark grey or graphite. During the courting and reproducing time, we may notice a slight mutation of colour: the plumage on the sides and the tip of the wings may turn to the yellowish and the legs may colour of red or copper. 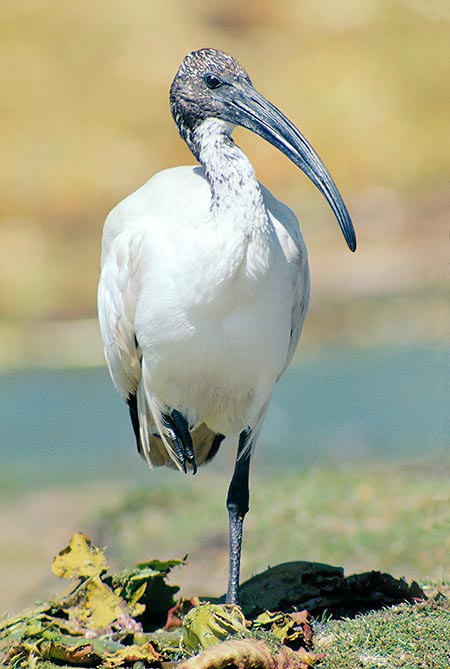 In the immature, the neck is not yet black © Giuseppe Mazza

During these periods, we may also see some red dots under the wings (visible in flight), which are nothing else than areas of … alopecia, ie bare skin.

The habitat is much various: it willingly frequents water streams, lakes, ponds and marshes, meadows and cultivated fields, plantations, waste dumps, lagoons and estuaries. At times, it may be found also far away from the water, in the middle of the savannah. It is diffused all over Africa, south of the Sahara Desert.

For what southern Africa is concerned, it is absent only from the central and southern part of Botswana, essentially arid country, but is extremely common in the Okavango delta and in the Caprivi. It is diffused in Namibia, excluding the desert coastal belt (Skeleton Coast and Namib), and is common at Etosha pan. It colonizes all South Africa, but the north-western part of the Cape, and is frequent in all Zimbabwe, Zambia and Mozambique.

It is reported also in Madagascar, in many islands along the African coasts and also in Middle East. Of gregarious habits, it may group in colonies of hundreds of individuals.

It is very prone to nourish of leftovers, carrions of small animals and organic material also decaying, so much that it is very common close to the abattoirs or where the fish is worked. It also hunts molluscs and insects or small vertebrates, at times looking for them into the mud, sounding and digging into the silt with the long beak, while rhythmically walking with small steps. It can predate small mammals, batrachians, reptilians, young of crocodile, nestlings and eggs (also of the Nile crocodile). Practically omnivorous, it does not disdain seeds and algae even if it shows a clear preference for the animal proteins.

A study carried on in South Africa (Cape Town) by the Western Cape Nature Conservation Board and the Avian Demography Unit has dealt of the impact of the sacred ibis and of the Grey heron (Ardea cinerea) as predators on the sea birds and on their nestlings and eggs. Usually, the predatory impact of the ciconiiforms on the populations of sea birds was considered modest, and mostly limited to the terns and their chicks, but this study seems to have evidenced something rather different.

The chosen sites have been two: Lambert’s Bay and Penguin Island (we remind that on the southern coasts of South Africa there are some resident populations of penguin, the so-called Jack-ass penguin Spheniscus demersus, and known in this way due to its cry similar to the braying of a donkey). 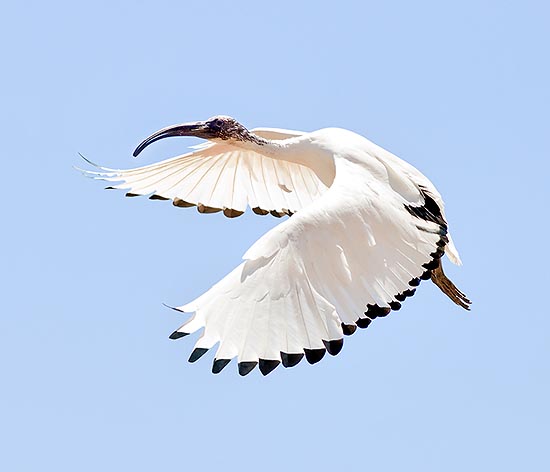 The Threskiornis aethiopicus reach the 90 cm, with a 110-125 cm wingspan © Giuseppe Mazza

The behaviour of sacred ibis and Grey herons (Ardea cinerea was observed along three following reproductive seasons, for 45 days: the ibis were seen predating more than 150 between eggs and nestlings of Cormorant (Phalacrocorax capensis).

The consequent statistical calculations suggested a total of more than 900 of eggs and chicks predated per season, by sure a not scarce quantity, if we consider the limited extension of the territory observed. In other words, it resulted done by the sacred ibis was the third cause of ..child mortality in the colony of Penguin Island, which counted about 5000 pairs of cormorants.

It likes to stay perched on even tall plants, but it likes also islets and reed beds, where it feels relatively safe from the predators.

The flight is typical: “superficial” wing beats, without lowering too much the extremity of the wings, alternated with more or less long glides, and, when flying in flock, it usually assumes a V formation, or with the components of the flight placed along an oblique row.

The vocalizations of this animal are not frequent and are not particularly characteristic; they limit, in fact, to sounds similar to low muffled grunts, or to deep “Kroaak”, emitted especially when they are on the ground, looking for food. The reproduction takes place in different periods, depending on the latitude and the climate.

For instance, in the Limpopo and in the Mpumalanga, it happens between August and May (more often in September), in Namibia, at the same latitude, between April and August. 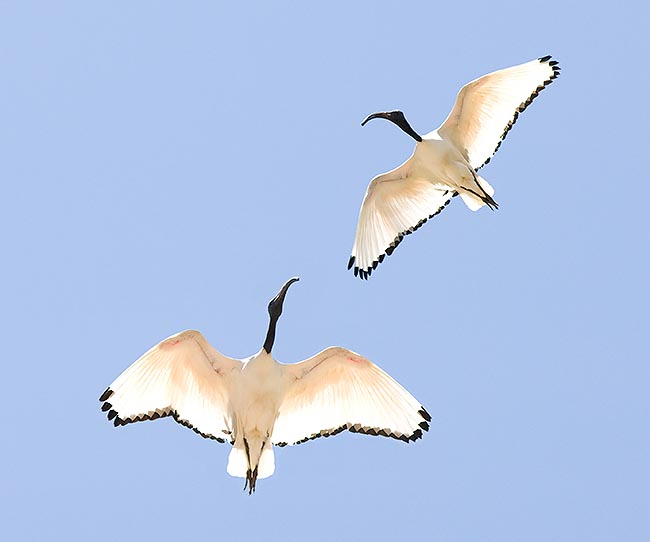 The nest is built in form of a rather rough platform, with branches and straws, with an average diameter of half a metre and a thickness of 20 cm and may be built on the plants (often tens or hundreds of close nests may be seen), on bushes or even on the soil, between rocks or canes.

The laid eggs are two or three, of blue colour or tending to the green, often with a reddish dotting; they are from 6 to 7 cm long and are hatched, by both parents, for about one month.

The chicks remain two or three weeks in the nest, where they are nourished by the male as well as by the female, and learn how to fly after 30 or 40 days.