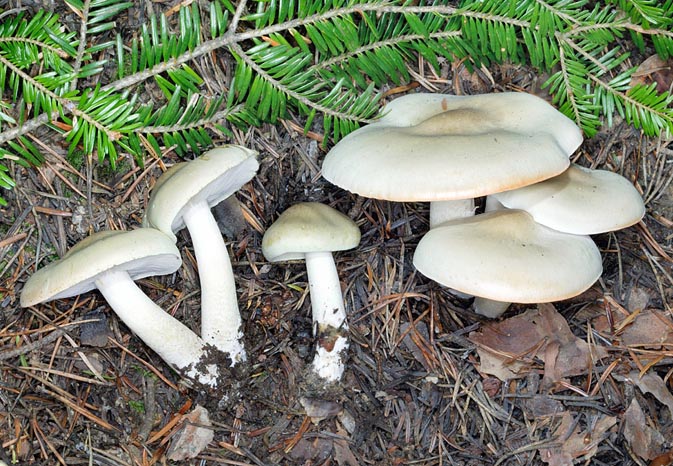 The name of the species comes from the Latin “saponáceus” = concerning the soap.

It is a species which fructifies from the Mediterranean zones up to the Alpine ones, adapting perfectly to whatever type of wood, be it of deciduous or conifer trees, regardless the substratum.

It fructifies from advanced summer to autumn.

In Italy it does not seem to have any dialectal names; in France it is known as “Tricholome à odeur de savon”; for Spain: in Castilian,“Tricoloma de olor a jabón”; in Catalan “tricoloma d’olor de sabó”; in Euskara “Ziza xaboisain”. In Germany, it is known as “Seifen-Ritterling”, in UK, as “soap-scented toadstool”, “soapy knight” or “soap tricholoma”.

For the description of the genus, please refer to Tricholoma columbetta.

To the section Rigida are ascribed carpophores with cuticle before white-olivaceous then grey-greenish, smooth, more or less glabrous, dry, at times just oily, with darker innate fibrils. Flesh with scent evoking the Marseille soap, bitter taste. Joint buckles mainly present in the hyphae of the hymenophore; pileipellis formed by more or less intertwined hyphae with just prominent terminals, weak pigment. 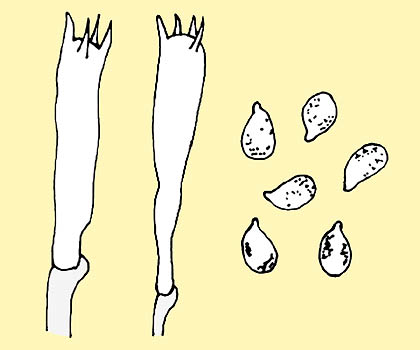 Flesh: thick, firm, compact, finally fibrous, off-white, tends to redden when cut especially towards the base of the stipe. The smell is the typical one of the Marseille soap, slightly bitter taste, not mealy.

Habitat: it grows by late summer and in autumn, even late, in groups, numerous at times, ubiquitous, from the plains up to the mountains. Edibility: not edible, even if not toxic, to reject due to the taste and the scent.

Remarks. This species has numerous varieties and forms, but it can be easily recognized by observing the tints of the cap, which do always have a mix of green and of cream white, or of green and grey. The varieties and the forms are: var. atrivirens (Pers.) Karst., which has smooth stipe and dark green cap; its form saccharriosmum Bon, which has a paler green colour and smells of disinfectant; var. napipes (Krbh.) Bon, which has grey-yellowish cap and yellow gills; var. sulfurinum (Quél.) Rea, which has bright yellow cap and yellowish gills and stipe; its form carneifolium Bert., which has white cap and pink gills; the form nympharum Mal., which has white cap and gills; the var. squamosum (Cke.) Rea, having sooty brown cap, at times even scaly and scaly stipe; its form ardosiacum (Bres.) Bon, which has a very dark colouration, almost blackish with bluish hues, and the stipe with sooty brown scales.