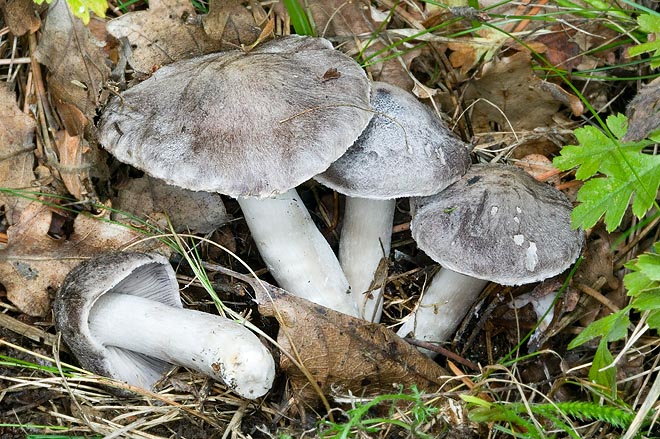 The term terreum comes from the Latin “térreus” = earthy, relevant to the earth.

It is a well known and sought for species, in some zones, even commercialized. In Italy, it is known with the popular names of “moretta”, “fratino”, bigello”, “cavarese”; in France, “tricholome couleur de souris”, “charbonnier”, “petit gris”, “Tricholome terreux”; in Spain: in Catalan, “fredolic”, “brunet”; in Castilian, “negrilla”; in Euskara, “ziza arre”; in Aragonese, “morrico de corzo”; in Germany, “Gemeine Erd-Ritterling”; in UK, “grey agaric”, “grey knight”, “dirty tricholoma”.

For the description of the Genus, please refer to Tricholoma columbetta.

Descriptions of the Section, Subsection and Stirpe

Belong to the Section Atrosquamosa small or medium sized fungi, with felty cuticle, fibrillose-woolly, silky, with brown or blackish little scales, whitish, grey brownish, even with yellowish shades, slightly protruding. The stipe is cylindraceous and slender, in some cases fistulose, smooth or fibrillose, furfuraceous, at times with remnants of temporary veil, in some cases adorned with scales, only one species is ringed. The flesh is mainly white, usually immutable, smell farinaceous, sub-farinaceous, at times aromatic or almost definable; the taste is good, mild, peppery, sourish, at times, even unpleasant. 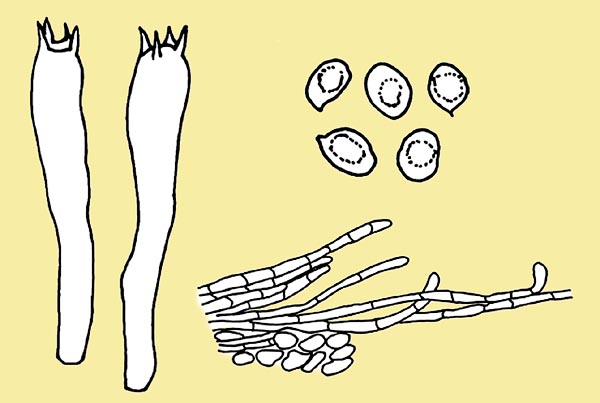 Cap: 3-5 (8) cm, initially hemispheric, campanulate, then convex and finally flattened and a little sinuate, with umbo at times obtuse, at times more attenuated; inrolled margin, then only curved with cuticle rolling inward on the gills, regular. Felted cuticle, fibrillose-woolly, uniform, of mouse-grey, smoky grey, darker at the centre, colour.

Hymenium: averagely thick gills, wide, emarginated and decurrent for a tooth, with regular thread, intercalated by lamellulas of unequal length, white at the beginning, then greyish when ripe.

Flesh: rather meagre, frail, fibrous in the stipe, white, greyish under the cuticle in the mature specimens. The smell is almost zero, but not of flour, mild taste.

Habitat: it grows in summer and in full autumn, in conifer woods, in much numerous groups.

Edibility: excellent edible, frail when raw but firm and crispy when cooked.