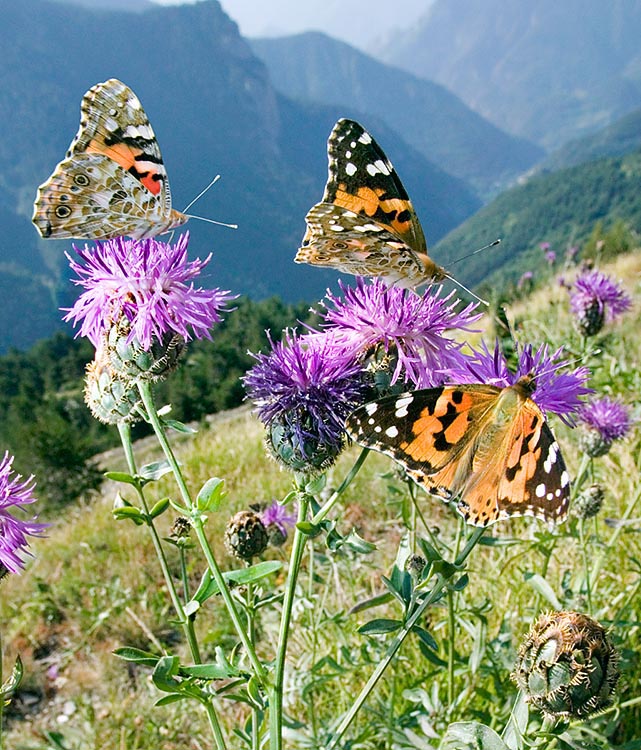 The beautiful Painted lady or the Cosmopolitan (Vanessa cardui Linnaeus, 1758) also known as Cynthia cardui belongs to the order of the Lepidoptera, to the family of the Nymphalidae and is placed into one of the 8 subfamilies present in Europe. In the family of the Nymphalidae are included usually more than 6.000 species of butterflies scattered all over the world, and therefore it is deemed to be the most consistent among those grouping the diurnal lepidopterans.

It is one of the most diffused butterflies in the world, being present in every continent but the Antarctic where it is of course absent and in South America where it results being rather rare.

As it’s often the case, the scientific name used by Naturalists of yore for classifying a new species, has generated several interpretations. The etymology of the scientific name of the la Vanessa (Cynthia) cardui is not exempt from these digressions.

For the genus Vanessa Fabricius, 1807, this author maintains that the name has been taken from a short poem written by J. Swift – Cadenus and Vanessa, where Vanessa was the intimate nickname the writer had given to the main character of its story. More formal the derivation of Vanessa as a transposition of the name “phanessa” derived from the Greek “phaino” = to shine, “phanes” = torch, “phanos” = bright, to indicate the beauty of the colours of the butterflies belonging to this family.

Fabricius did often reclassify names of species of lepidopterans, replacing names already given by his predecessors or renaming them with new terms, in function of new techniques of determination occurred in the meantime or of his own personal interpretations.

During his frequent study stays in London, he surely got in touch with the British literature of the time often deriving from those writings the classification of insects with new names. The genus Cynthia, often prevailing, is rightly a consequence of these evaluations done by Fabricius. Cynthia is a mountain of the Greek island of Delos, birthplace of Diana who rightly took its name. The author borrowed this term combining and replacing it to the one of literary derivation of Vanessa, both names very common and known in the English literature of the time. The Latin name of the species “cardui” (Carduus) easily identifies, on the contrary, with the essence preferred by this butterfly.

The vulgar European names are quite in agreement in defining this elegant and coloured butterfly: in English Painted Lady, in French Belle Dame, in Portuguese Bela Dama, in German Distelfalter, in Dutch Distelvlinder, in Spanish Vanesa de los cardos, in Italian Vanessa del cardo.

The Painted lady presents evident migratory characteristics, with seasonal movements taking it from tropical latitudes up to north of the boreal continents. This is a peculiarity which approaches it and at times leads to equate and overcome the most well-known North-American migration of the Monarch butterfly (Danaus plexippus) even if this one, contrary to ours, surely performs a return voyage. 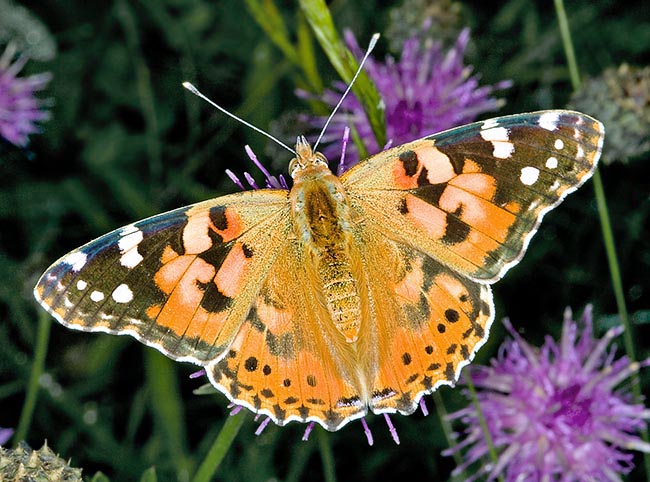 It can cover even 3.000 km and is one of the most world diffused butterflies © Giuseppe Mazza

Every year hundreds of million of specimens move in random order, on a front of thousands of kilometres in a spectacular migration which take them from Africa northwards to regain and civilize new areas.

During such migrations, repeated in spring and often also in autumn, it can cover up to 3.000 km. Its presence has been sighted even in Iceland.

Rarely this butterfly survives to the rigours of the winters in our temperate areas.

In the Mediterranean, in some winters they are able to survive only on the coasts of the extreme south of Spain, in Malta and rarely in Sicily, whilst in the whole continental area the species is practically extirpated by the adverse meteorological conditions.

It appears that this migration does not take place in the austral hemisphere, where, even if present but never numerous, the lands conquered in summer are never submitted to winters such to destroy the entire colonies. A migration of these quantities is partially done in some Asian locations of the Near and Middle East. It is thought that part of the autumn population can undertake a return trip up to the North-African coats to survive the winter. The Painted lady nourishes of the nectar of many species of flowers and therefore can diffuse in various types of habitats. It is present from the sea level up to more than 2.000 metres, finding its ideal habitat between the 300 and the 1300 m of altitude where often the concentration results even high. Their presence is in any case conditioned by the entity of the migrations as well as by the availability of the plants hosting them.

All the specimens present in the various continents are classified in the species Vanessa (Cynthia) cardui even if after some naturalists some characteristics or local peculiarities have already led to the determination of new subspecies not yet officialized. In Australia, the Vanessa kershawi species overlapping in the home range to the Vanessa cardui however not much diffused, has been now upgraded to species. Similar species are present in the Americas with the Vanessa (Cynthia) virginiensis.

The Vanessa (Cynthia) cardui is a butterfly with about 54-60 cm of wingspan, with the front face of the wings having showy and variegated colours formed by orange reddish little spots spaced out by blackish spots whilst on the margin of the back side of the rear wing are present five spots shaped like small circled ocelli. There is a slight dimorphism, almost inappreciable, between the two sexes, as the female even if similar, usually results slightly more robust than the male. 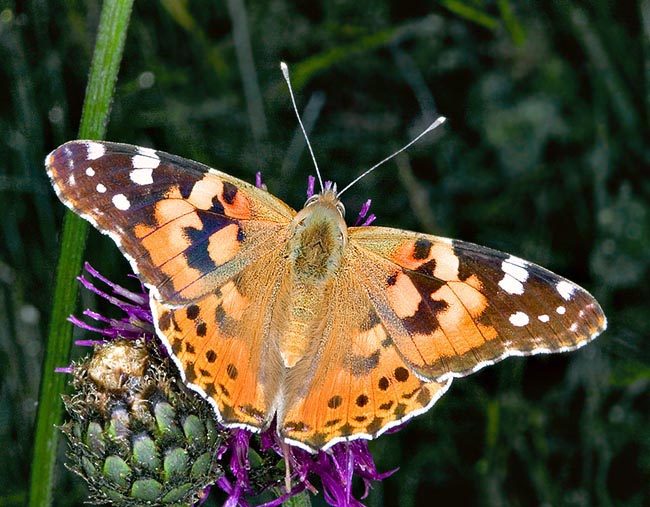 Wingspan of 54-60 mm. The female is little more robust than the male © Giuseppe Mazza

Like all Nymphalidae, also this Vanessa has the characteristic of having the first fore legs covered by a thick down, particularity which has later on determined and assigned to this family the epithet of “brush-footed”: a tool, now not used for walking, but used continuously for cleaning the antennae.

These ones are strongly clavate and robust and move continuously when the butterfly is resting.

Contrary to some congeners (Inachis io, Aglais urticae, Nymphalis antiopa) which survive our winters as imago camouflaging motionless and inactive for long periods, this butterfly shows on both faces of the wings the same colouration, instead of the strong blackish shade of the rear face, rightly typical of the species that have been obliged to develop a survival mimetism.

This would give the indication that the Vanessa cardui is a species of more recent migration and colonization.

It flies from the month of April to late October and lives on various essences among which it prefers the genera Carduus, Cirsium, not disdaining Malvaceae, Boraginaceae and Urticae.

Amongst the flowers it prefers Buddleja, Aster, Zinnia, Taraxacus, Helianthus but there is no flowers which does not see its presence. It has a powerful and continuous flight, with very high speed and maintained for long periods.

It is a bivoltine species in the warmest areas whilst is univoltine in the cooler areas or of mountain. It spawns directly on the leaves of the hosting plants which open after a very short incubation. In sufficiently favourable period, hatchings may be observed in less than five days.

Upon the birth, the caterpillars are blackish and keep such colouration along all their larval stage. The growth is fast and after about two weeks they pupate for a metamorphosis lasting about 15 days.

Contrary to other Nymphalidae (see Inachis io, Aglais urticae, Vanessa atalanta, etc.) the Vanessa cardui does not willingly accept the close coexistence of other caterpillars of the same brood, and therefore we do not see the typical overcrowding of larvae on the same plant, typical of the other mentioned species.