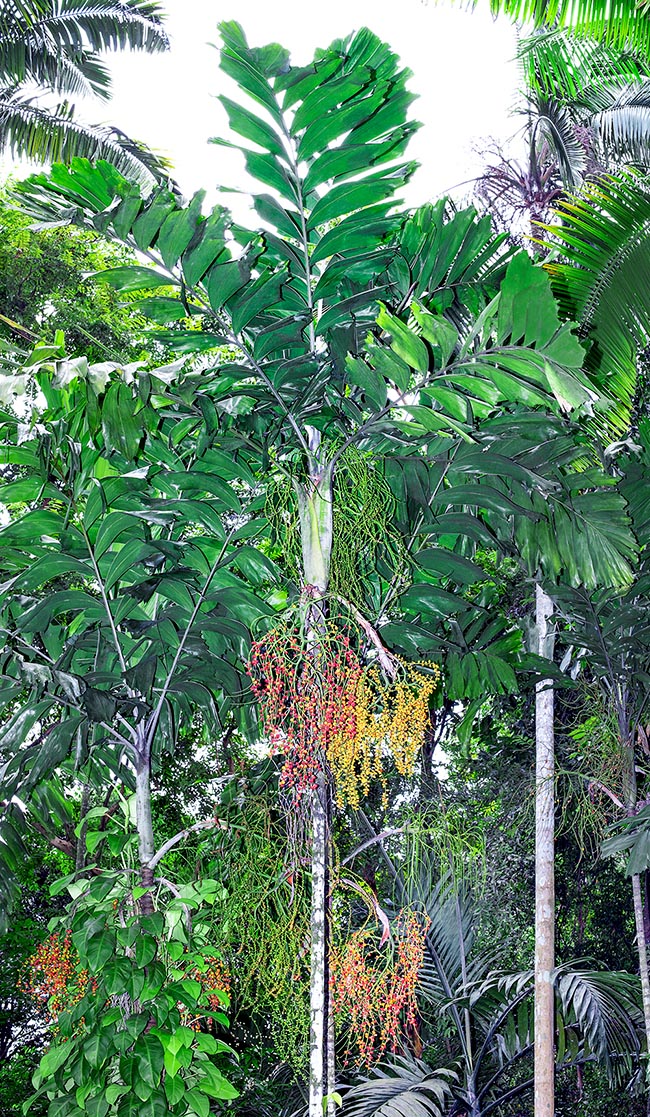 Veitchia subdisticha is endemic to the wet rainforests of Solomon Islands, where it grows at low and medium altitudes reaching 14 m of height with a 30 cm diametre stem. The leaves, arcuate and luxuriant, are very elegant due to the big and unusual foliar segments of the rachis truncated and jagged at the apex © Giuseppe Mazza

Veitchia subdisticha (H.E.Moore) C.Lewis & S.Zona, 2011,  is endemic to the Solomon Islands, where it is distributed in the rainforests at low and medium altitudes. Its habitat is threatened by agriculture and by the human settlements however this species has not yet been classified in the IUCN Red List.

The name of the genus Veitchia has been dedicated to a family of influential English nursery men active from the XVIII to the XX century, whose most known members were James Veitch Jr. and his son John Gould Veitch, who introduced in Europe many species of rare plants.

The name of the species subdisticha refers to the arrangement of the flowers on the inflorescence and comes from the combination of the prefix sub, meaning “almost”, with the Greek terms dίs (two times) and stichos (row), that means “arranged in two rows”.

The species has been recently reclassified from the genus Drymophloeus to the genus Veitchia after the results of a molecular study on the subtribe Ptychospermatinae, to which the two genera Drymophloeus and Veitchia do belong. The study was published by Carl Lewis and Scott Zona in the American Journal of Botany in 2011.

It has medium dimensions, with a solitary stem that may reach 14 m with a diametre of up to 30 cm, of brown/grey colour. The stem is straight and thin and is characterized by dark rings that correspond to the scars of the foliar bases. In many specimens the stem grows on a small cone of aerial roots, more than 25 cm tall and as broad as the base of the trunk.

The foliar crown is moderately dense and is formed by pinnate leaves up to 2,5 m long. The leaves have many foliar segments, up to 40 cm long, of bright green colour above, and of paler green colour below. The foliar segments are lanceolate, straight and up to 10 cm broad, with substantial thickness, and are characterized by having a truncated and irregularly dentate apex. They are inserted in the rachis in a way to form a V-shaped section. These elements confer the crown a luxuriant look.

The leaves have very short petioles of green/grey colour, but they become almost black at the base, in the point where the petiole merges to the foliar sheath. 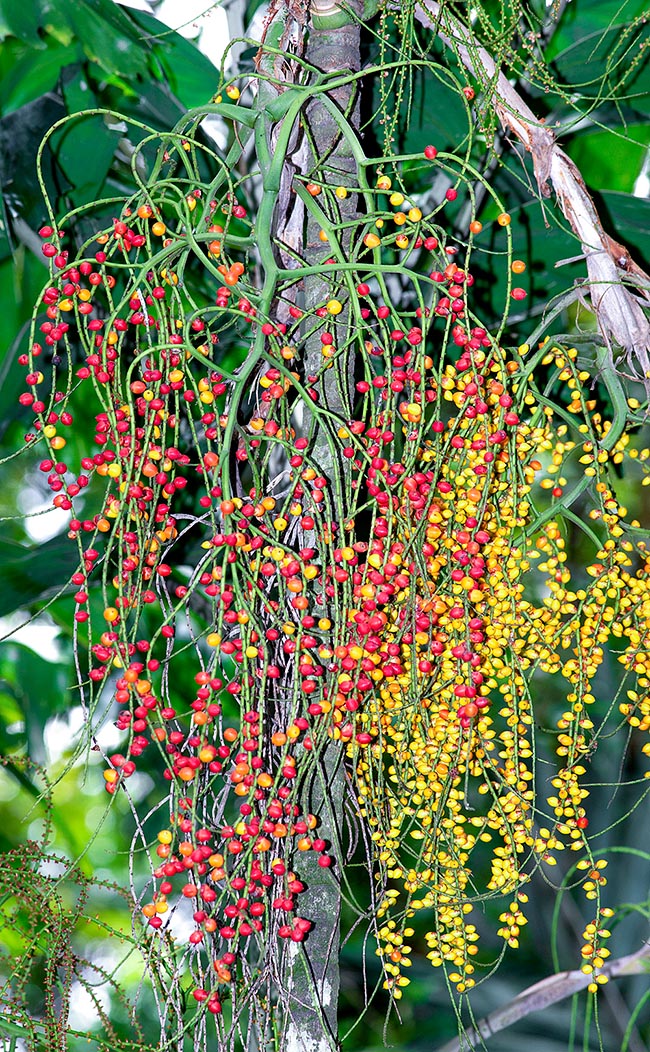 The edible fruit, red when ripe, are ovoid and measure about 2 cm © Giuseppe Mazza

The sheath is up to 120 cm long and wraps completely the stem. It is grey/green, covered by a pale tomentum that at times renders it almost white.

The inflorescence emerges under the foliar sheath, in correspondence to the rings of the stem and is up to 30 cm long and is ramified in 3/4 orders.

The species is monoecious and the male and the female flower are on the same inflorescence, following the typical arrangement that confers the name to the species.

The fruits are produced in a huge quantity and are ovoid, up to 2 cm long and a little more than 1 cm broad. Initially, their colour is green, then yellow and red when ripe. The seeds are round, up to 1 cm long and 0,5 cm broad.

The fruits are fleshy and juicy; the local population occasionally consume them as food.

The common names with which this palm is called are basibasi, mamawa, ori.

Veitchia subdisticha is not easy to find in cultivation, despite its undoubted aesthetic characteristics, and can be seen mainly in the botanical gardens and in the big private collections. It does not love strong winds.

It is quite suitable for being usable as an isolated specimen or in a group of more plants having different heights.

Like the other species of the genus Veitchia, it is very fast in its growth, in suitable climates. It prefers sheltered and shady positions when young, then, while growing, adapts to the full sun. It is not demanding about the composition of the soil, but loves the humid, very well drained, ones. In cultivation, the loam must never be allowed to dry up between one watering and another. Does not love strong winds.

It is a strictly tropical species and grows well in the tropical climate and in the areas that never freeze. The lowest temperatures must never go under 5 °C, otherwise the plant can suffer serial damages, up to the death.