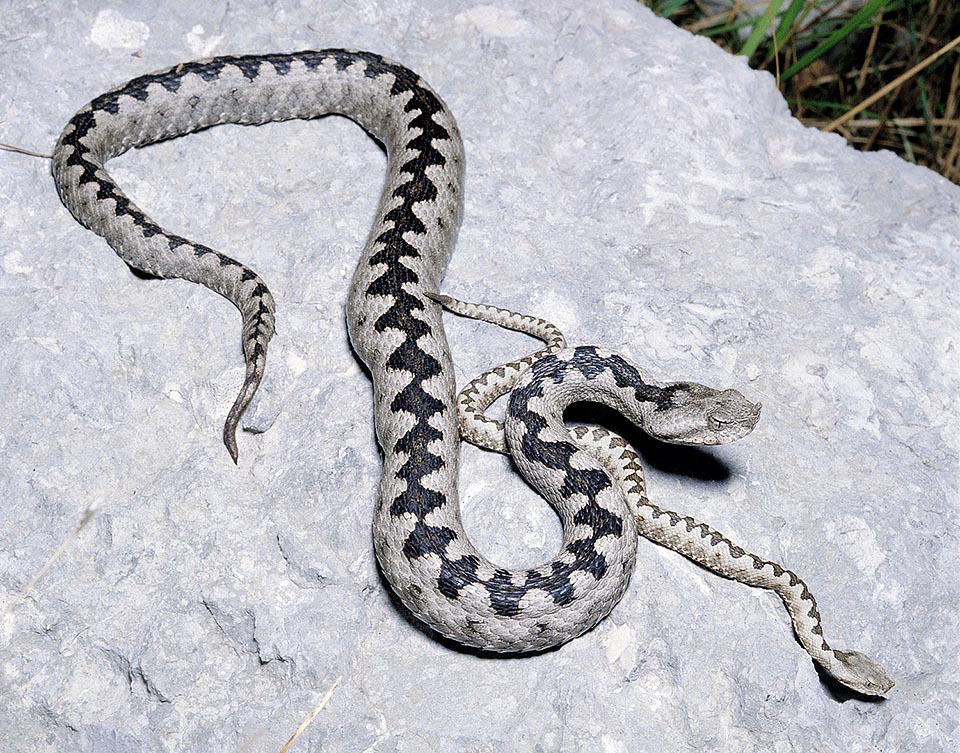 Vipera ammodytes with young. The name viper comes from Latin “vivipera”, that is, delivering live sons. In fact in the viperids the eggs hatch inside the uterine sac © Giuseppe Mazza

The Viperids (Viperidae) family of Scaled (Squamata), reptiles, includes in the world about 270 species, subdivided in two subfamilies: the Crotalins (Crotalinae), belonging exclusively to the American continent, and the Viperins (Viperinae), that live in Europe, Asia and Africa. They are all equipped with “solenoglyph” teeth, that is empty inside, from where the venom can transit, and retractile, to shut when in resting position.

Each species, depending on the type of venom, the use of which is that of killing the prey and digesting it, may arouse four types of physical reactions: proteolytic, coagulant, hemolytic and neurotoxic.

That of the Horned viper (Vipera ammodytes Linnaeus, 1758) causes an especially neurotoxic action, with the paralysis of the subject. Unlike other vipers, almost all little dangerous, this is capable to kill a man. As a matter of fact, it is the most venomous among the European species, luckily little aggressive and very timid, therefore difficult to meet. 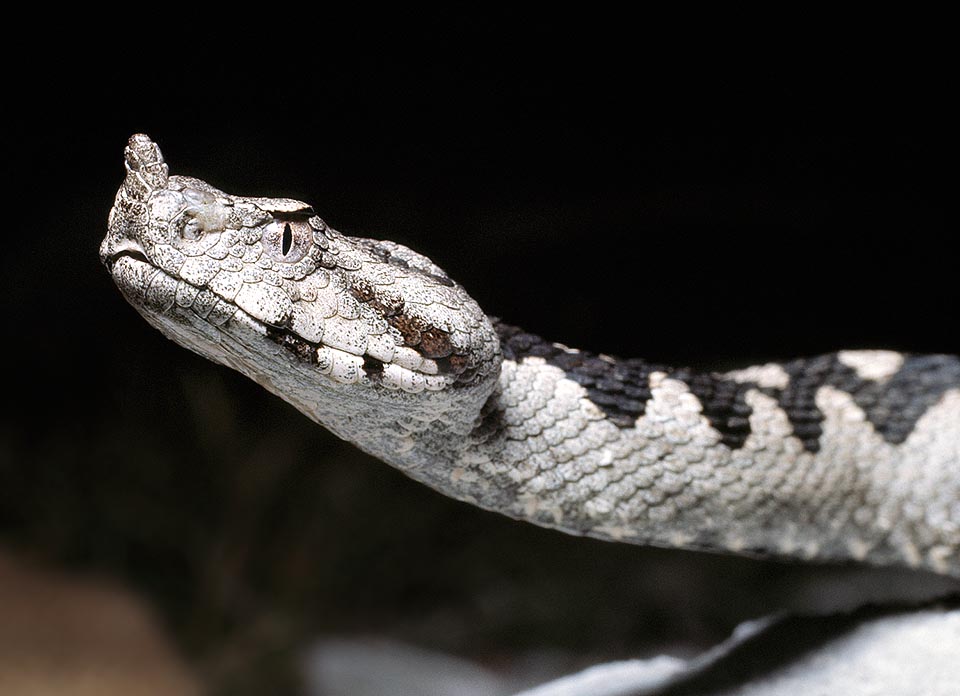 Terrifying close-up of the head with the typical frontal small horn, about 5 mm long. The viperids are highly evolved snales. Not only they protect their eggs inside the mother body, but the venomous teeth are hollow: long folding syringes to inject with no waste and deep their powerful venom. In the rattlesnakes this group of reptiles has done then a further incredible step forward, with infrared rays dimples for a perfect vision of the preys even during the night in the total darkness © Giuseppe Mazza

The genus Vipera, comes from the name the Romans gave to these serpents, that in turn comes from “viviparous”, that means that it gives birth to live children, emphasizing the fact that this reptile has eggs opening inside the uterine sac, with newborns already able to move, like the mammals. The gestation so called actually ovoviviparous, might therefore indicate an evolution step in the world of the reptiles. For what the specific name ammodytes, coming from the Greek words “ammos” = arena and “dyo” = to enter, from which we might infer the action of easily penetrating into the sand, concerns, we can affirm that this is an odd choice, poorly corresponding to reality, being the rocky environment the exclusive one of this species. 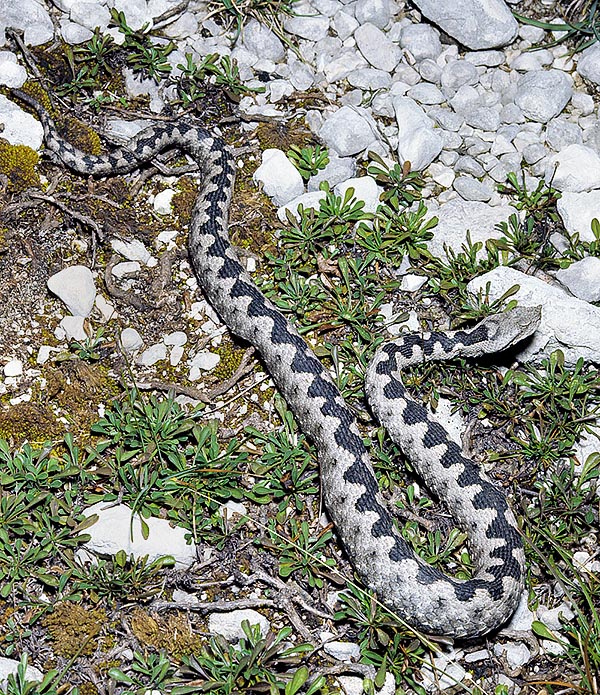 The Vipera ammodytes, can be found in Austria, Slovenia, Croatia (islands included), Bosnia Herzegovina, Central Serbia, Montenegro and Macedonia, Albania (and Ada island), up to Greece (with islands of the Aegean and Ionian Seas). Eastward: up to Georgia and north-eastern Turkey.

In Italy it is present only in the north eastern regions: Trentino Alto Adige, Veneto and Friuli Venezia Giulia. It is absent in Sardinia, as well as any other venomous serpent.

It is missing in the rest of Europe, that is in all the western part.

The main reason for this irregular territorial distribution may be attributed to its “stenoecian” nature, that may define as a reduced ecological tolerance, where small or very small variations in the environmental factors affect its existence and may even cause its extinction.

Always looking for the sunniest locations, the horned viper prefers the rocky zones and the screes, able to accumulate heat, as well as the dry shores of the streams, the walls of piled up stones and the sinkholes. Consequently, the species is totally absent from the water, also due to its clumsy structure that prevents smooth movements suitable to such environment. For the same reason, it is not able to climb the trees, but only to reach some low bush. In its preferred herbaceous habitat we can easily distinguish Helichrysum italicum (curry plant), Salvia officinalis (common sage) and Smilax aspera (rough bindweed).

The Vipera ammodytes Linnaeus, 1758 can be easily recognized due to the presence of a frontal horn (about 5 mm), of soft consistency and covered by small scales, unique feature among these species. The size goes from 60 to 90 cm, one metre exceptionally. The back is pale grey with whitish shades. 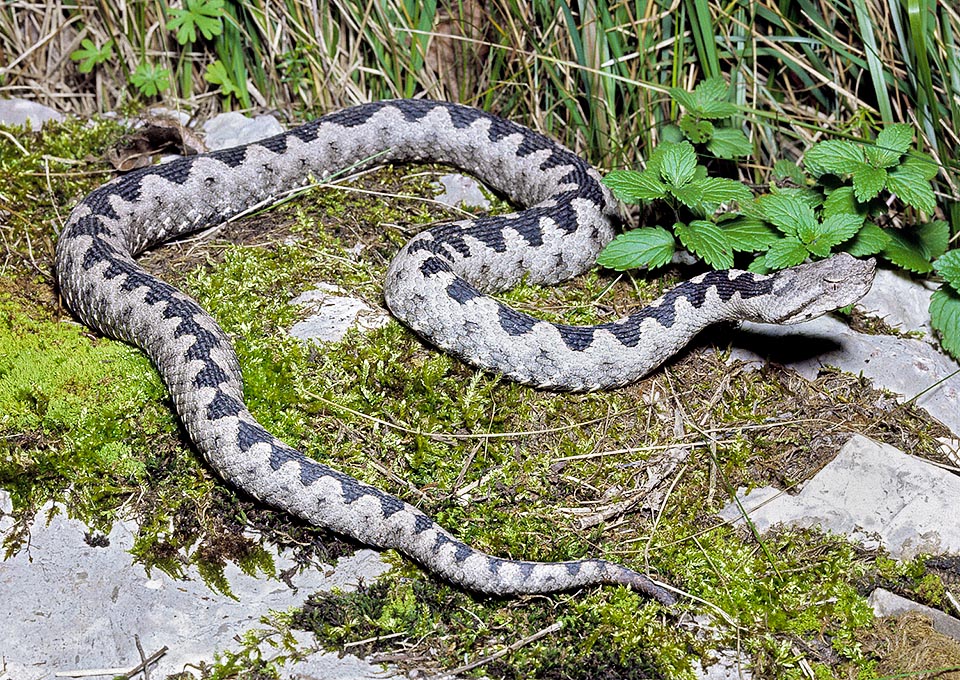 It has a particular European distribution due to the scarce ecological tolerance: very small variations in the ambient variations affect their existence till extinction © Giuseppe Mazza

The abdomen has also small white dots and black spots. Through its length is always present an evident zigzagging pattern, formed by lozenges linked together up to the tail. The head, robust and well visible, is adorned by dark marks, distinct, U-or V-shaped, that may recall the silhouette of a gripper. The females are usually less drawn, with paler lines. Over the eye is evident a sort of protruding eyebrow. At times are observed specimens with orange, reddish or pale brown chromatisms. In the subspecies can be observed specimens having orange or yellow tail.

The Vipera ammodytes hunts waiting patiently for the prey. It easily climbs the rocks, where it feels completely comfortable. The main foods include mammals; birds, saurians and arthropods. Among the first we have: Sorex araneus, Sorex alpinus (common shrew and alpine shrew), Microtus arvalis (common vole) and Glis glis (edible dormouse). Among the birds it is able to catch Erithacus rubecula (robin), Parus major (great tit) and Motacilla alba (white wagtail). 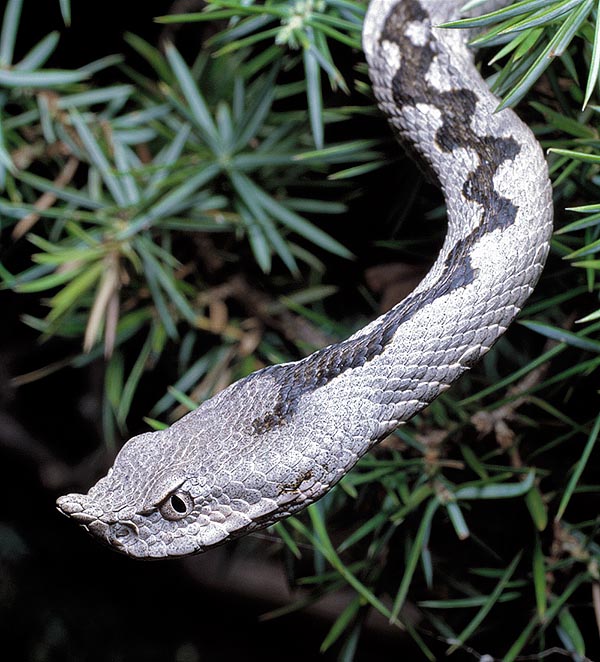 The young of viper, besides various grasshoppers, such as Oedipoda caerulescens (blue-winged grasshopper), or of Myriapoda (Scolopendra cingulata), nourish mainly of Lacertids, among which: Podarcis muralis (common wall lizard).

The height in which the species can live goes from the 20 m up to the 1700, according to which is necessary a certain thermoregulation, especially for reproduction purposes. At high altitudes, in particular the females, in order to quicken the gestation, must stay hours between the warm cracks of the rocks or between the sheltered tangle of the bushes.

Also the season affects the search of comfortable sites. When the summer is too hot we may find individuals active also during the night. After the winter hibernation, that in the coldest zones begins since September, the first ones to wake up are the males, at times already by mid March. Due to the insufficient fat stored in the zones the females deliver the young every two years. As an average there are 6-8 unborns, that under the best conditions can reach the number of twenty. Initially they reach the 20 cm with an average weight of 7 g.

The mating occurs between April and May, the delivery in the months of September, October. An extraordinary ascertained event is that the Vipera ammodytes female can cross with the Vipera aspis male, at times with mixed specimens genetically fertile. Proof that the natura is able to create unexpected exceptions, evidence of a common and close evolutionary history.

Animals able to hunt these vipers are the wild boars (Sus scrofa), the common hedgehogs (Erinaceus europaeus), the European badger (Meles meles) various raptors among which the short-toed eagle (Circaetus gallicus). To get information about the venom of the Italian vipers, their relationship with the man and what to do in case of bite, please read the page concerning the Vipera berus.