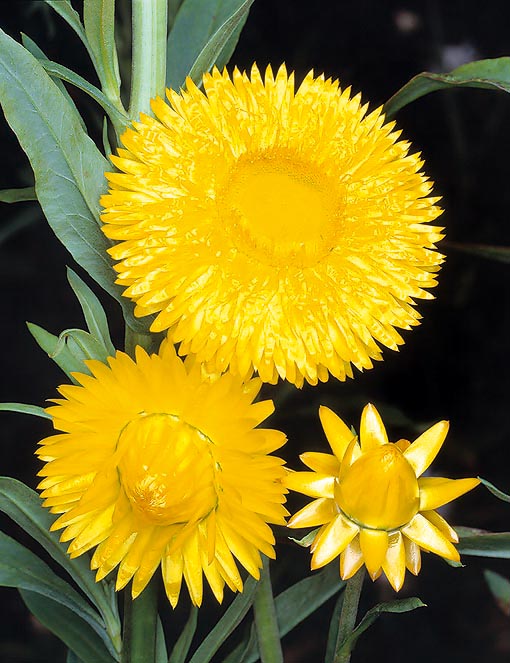 Cultivable as annual too, it may be 90 cm tall with 5 cm flower heads © Giuseppe Mazza

The plant is native to Australia, where it grows, in full sun, in the zones with semi-arid and of Mediterranean type climate, on mainly rocky and sandy soils.

The name of the genus comes from the combination of the Greek words “xerόs” = dry, and chrisόs = gold, with reference to the yellow papery bracts of the inflorescences; the name of the species is the Latin word “bracteatus” = covered by golden leaves, with analogous reference.

The Xerochrysum bracteatum (Vent.) Tzvelev (1990) is a much variable herbaceous plant, annual or perennial short lasting, with tap root and little ramified stems, prostrate or erect, 20-90 cm tall, coarse and covered by small glandular hairs (i.e. equipped at the apex by a gland which secretes an often viscous substance).

It has alternate, sessile (without petiole), leaves, from elliptic to oblong-lanceolate, 2-10 cm long and 0,5-2 cm broad, green or green-grey, rough, pubescent and covered, them too, by small glandular hairs.

The terminal inflorescences, with a diameter of 3 to 5 cm, on an about 15 cm long peduncle, are the typical flower heads of the Asteraceae, formed by a host of sessile flowers, spirally inserted on a roundish base, the receptacle, surrounded by an involucre formed by a series of papery, glossy, bright yellow, rarely white, bracts in nature, often with red streaks in the outer ones.

These ones have the same function of the flowers of the outer ring, called ray florets, which are present in most of the Asteraceae, but not in this plant, namely that of attracting the attention of the pollinator, as if they were the petals of a single flower. 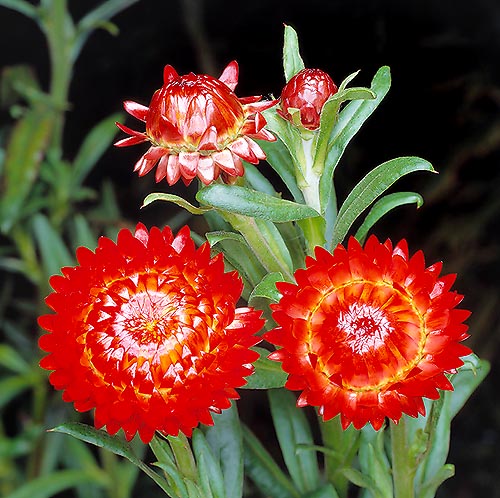 In the numerous varieties selected during the last two centuries, the colour of the bracts of the involucre, besides yellow and white, varies from the pink to the red and the purple.

Inside the receptacle, are the flowers, called disc florets, tube-shaped and of yellow colour. In particular, in the outer ring the flowers are female, whilst at the centre, in a clearly major number, some hundreds, the flowers are bisexual.

The flowers, containing one seed only and called achenes (or, more correctly, cypsaele) in the Asteraceae, are yellowish, thin, with an almost quadrangular section, 2-4 mm long and surmounted by the pappus, the modified calyx of the flower, which has the function to help their dispersion, formed by yellow bristles covered by microscopic stiff hairs.

It easily reproduces by seed, covered only by a thin layer of soil (the light helps in germinating), which sprouts in 1-2 weeks at the temperature of 20 °C; the sowing may be done by late winter in a sheltered location, or, directly, in spring. It is just as easy reproducing by cutting, which must be, in any case, done when we wish to keep a particular variety.

The plant has some particular features which differentiate it from most of the Asteraceae and which have made it immediately popular as soon as it was introduced in Europe from Australia.

Firstly, the ray florets are missing and their function is assumed by the bracts of the involucre, which are numerous, outstretched when completely opened, with a bright colour and papery consistence. 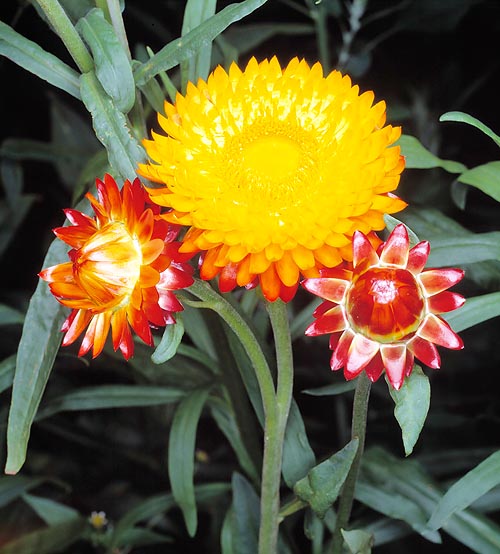 Best for dried flowers compositions, as the bracts do not fade © Giuseppe Mazza

But what was most impressive, was the long lasting dried flower heads, several years, with the colours of the bracts keeping unchanged, and for this reason they stand between the most utilized in the dried flower compositions. For an optimal result, the flower heads are to be picked up before they complete opening, deprived of the leaves and having them dried hanging upside down, in a dark, cool and aerated, location.

Apart from this utilization, they are plants much appreciated in the gardens, as edges and flower beds in full sun, due to the fast growth, the length of stay of the flowers on the plant, and the long-lasting blooming time, going from spring to late autumn; for getting a new blooming, it may be useful to periodically take off the dried flowers.

It adapts to whatever sort of soil, provided well drained, with regular watering in summer, but allowing the plant to dry up before irrigating again, as it is quite susceptible to the radical rottenness, in fact, it does not like the too rainy climates, but prefers the Mediterranean ones. The perennial forms do not bear temperatures even of few grades under the 0 °C and behave, and are to be treated, as annual.

Cultivated either in pots or in small cages, even hanging for the varieties of creeping habits, it is a plant not to be ignored for the decoration of balconies, terraces and verandas, in full sun and with the possible addition of sand or of agri-perlite, around the 25%, for improving its drainage.