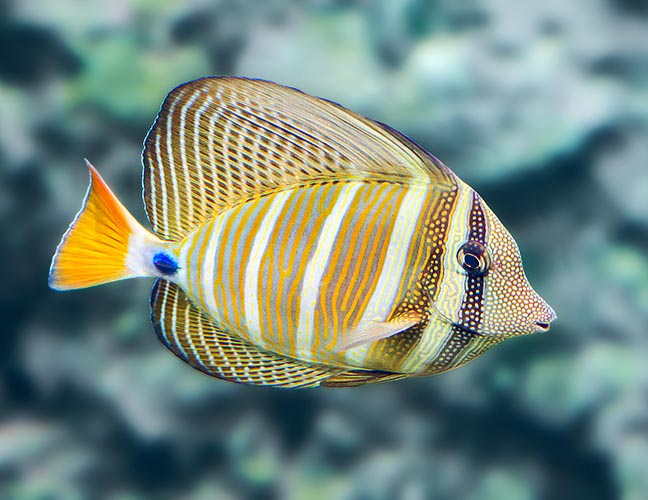 The Sailfin tang (Zebrasoma velifer Bloch, 1795) belongs to the class of Actinopterygii, the ray-finned fishes, to the order of Perciformes and to the famly of Acanthuridae.

The name of the genus “zebrasoma”, comes from “zebra” = zebra, the well known African equine, and from the Greek “soma” = body; it is therefore an anima “with the zebra-shaped body” due to the bands unusually vertical in a surgeonfish.

It is present in the tropical waters of the Indian Ocean, more or less in the same environments of the Zebrasoma desjardinii, and, farther, we find it in the Pacific, from Indonesia to the Hawaii and to the Tuamotu Islands. As northern limit, it has Japan, and, southward, New Caledonia and Easter Island. It seems to be present also in Florida due to the inadvertent release of aquarium animals.

It lives in the madreporic formations of where are present rocks rich in seaweeds, exploring the bottom in shallow waters, also troubled, up to a maximum of 30 m of depth. 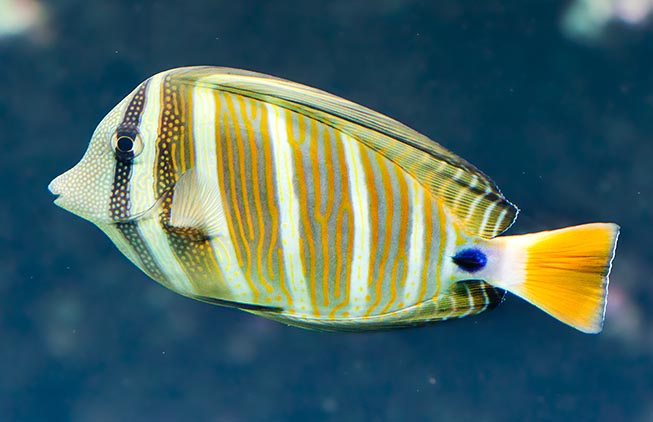 The caudal peduncle has the cutting blade typical of the surgeonfishes, evidenced on both sides by a showy blue dot. This is a warning for the importunators, even if not poisonous.

The mouth has relatively bigger teeth than the other Zebrasoma, because it is a fish nourishing of leafy seaweeds.

The first, longer, crosses the eye and is covered by numerous small white dots, present also in the front part of the snout. The second, close to the small dots which colour of yellow-orange, fades into paler shades and shows already some vertical yellow-orange traits which replace or follow the aligning of the dots. The other 4 vertical bands contain only lines of this colour, more or less forked or interrupted, on a dark brown or bluish grey background.

The first caudal begins as white but then becomes immediately orange, and ends with a blue small margin. Also the sail-shaped fins have several yellow-orange stripes. 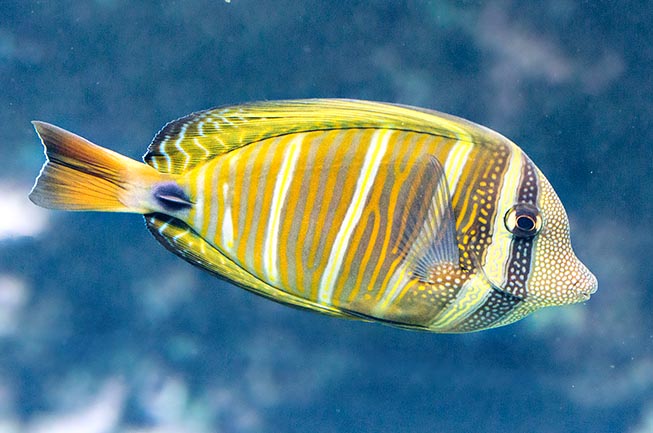 They are concentric and parallel to the edge, visible only when they are completely spread out.

It reproduces with pelagic eggs.

The juveniles have a simplified livery with vertical yellow and black bands.