The species is native to Australia (eastern Queensland), Bismarck Archipelago and Papua New Guinea where it lives mainly at the margins of the rainforests on soils usually poor, sandy or derived from basaltic and granitic rocks, from the sea level up to about 1600 m of altitude.

The name of the genus comes from the Greek “ἀγαθίς” (agathis) = ball, with reference to the shape of the female cones; the name of the species is the Latin adjective “robustus, a, um” = robust, with obvious reference. 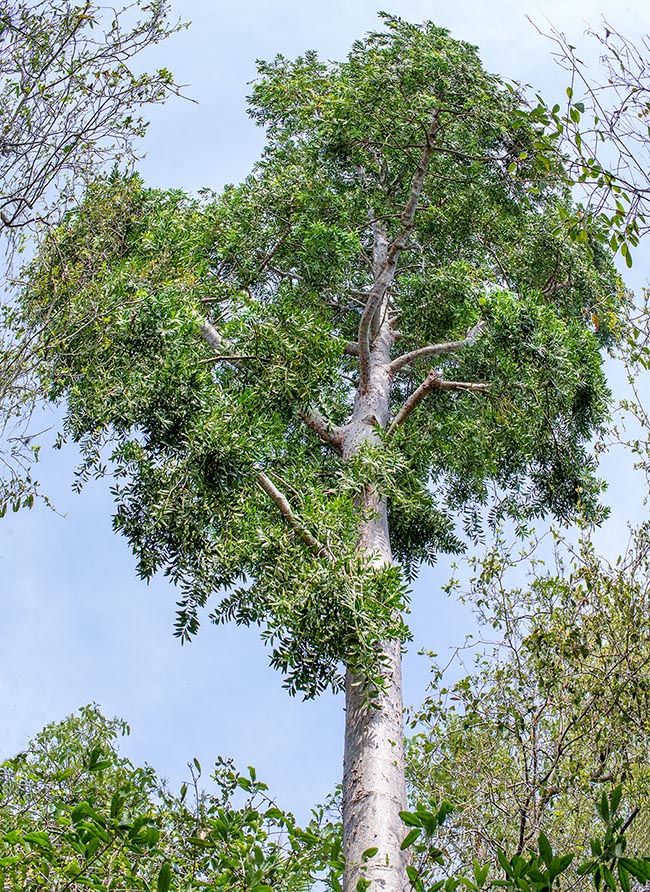 The Agathis robusta (C.Moore ex F.Muell.) F.M.Bailey (1883) is an evergreen monoecious tree with erect trunk, cylindrical, up to about 50 m tall, and of 2 m of diameter in the old specimens in nature, with smooth or scaly bark, of brown grey to orange brown colour, exuding a whitish resin.

The elegant leaves, opposite or subopposite, are simple, lanceolate, with entire margin and acute or acuminate apex in the young plants, 8-14 cm long and 3-5 cm broad, with acute or obtuse apex, 6-12 cm long and 1-3 cm broad in the adult plants.

The male cones, usually axillar, are solitary, cylindrical, of yellowish brown colour when ripe, 4-9 cm long and of 0,7-1,3 cm of diameter when ripe, with more than 600 imbricate microsporophylls (modified leaves bearing the pollen sacs) each one with 2-8 pollen sacs.

The female cones, on robust peduncle, are solitary, cylindrical to globose, 8-15 cm long and of 8-10 cm of diameter, of brown colour when ripe, with about 400 imbricate scales almost triangular.

– Agathis robusta subsp. robusta – Synonym: Dammara robusta C.Moore ex F.Muell. (1850). Present in Australia (eastern Queensland) and Papua New Guinea from the sea level up to about 900 m of altitude. Male cones of up to 0,9 cm of diameter and almost triangular microsporophylls.

It reproduces by seed; just interred in draining loam maintained humid, with germination times of 1-4 weeks, the seed is to be buried in the shortest possible time, having a germinability duration of a few months, unless duly conserved at temperatures around the -18 °C, with germinability of some years. It can be reproduced by cutting and by micro-propagation. 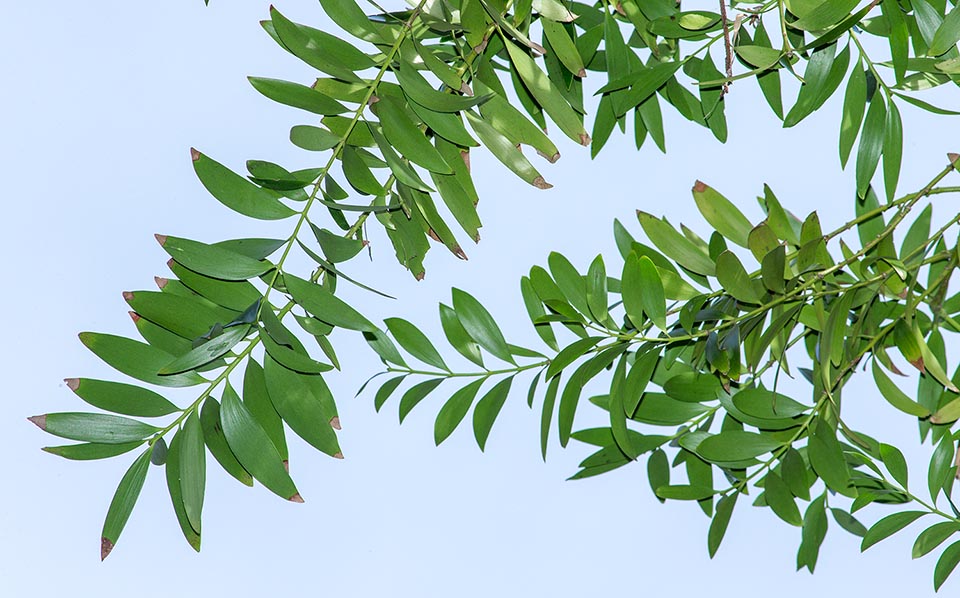 Majestic species with elegant foliage, present on the margin of the rainforests of Bismarck Archipelago, Australia and Papua New Guinea, is widely utilized as ornamental in great parks and as road tree in the tropical and subtropical climate regions. It resists, in a warm temperate climate, to the sporadic cold up to -8 °C © Giuseppe Mazza

Majestic species amply utilized as ornamental in great parks and as road tree in the tropical, subtropical and warm temperate climate regions, where adult plants have resisted to exceptional values of temperature up to about -8 °C. It requires full sun, but bears a slight shade, and adapts to a great variety of soils, from sandy to clayey, from acicic to alkaline, even if poor, but grows faster in fertile well drained soils provided maintained almost constantly humid.

The wood, of cream to pale brown colour, fine-grained, easy to work and to finish, in the past has been extensively employed in Australia in the civil and naval constructions, especially for inner parts, being relatively little resistant to the atmospheric agents, for prized furniture, musical instruments, in the production of paper, of plywood, etc., its utilization is continued in Papua New Guinea, but in limited measure, also for the difficulty of supplying, growing the tree in locations difficult to access. The resin is occasionally collected for the production of paints, adhesives and colours.