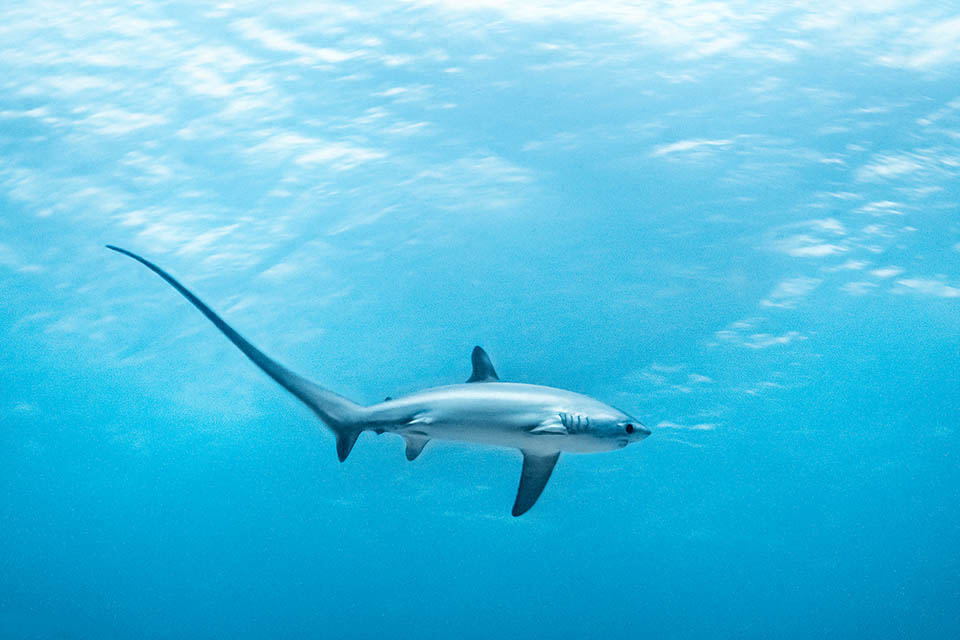 With a tail longer than half of the body, Alopias vulpinus is present in all the seas at temperatures between 11,6 and 28,2 °C © Rafi Amar

The monitor lizards use the tail as a whip to defend themselves and drive away the intruders. The Nile crocodile even makes a weapon of it for breaking in one blow the legs of the unaware gazelles that get close for drinking into the water streams, and also in the sea there is somebody who uses the tail for hunting.

This is the case, for instance, of the Common thresher or Atlantic thresher [Alopias vulpinus (Bonnaterre, 1788)], belonging to the order of the Lamniformes, the same as the Great white shark (Carcharodon carcharias) at the top among the world of the predators in the world of the fishes, and to the family of the Alopiidae, represented nowadays only by this genus with three species.

Alopias gets its origin from the old Greek “ἀλώπηξ” (alopex) that means fox, with reference to the cleverness of this fish, noted since the ancient times by the fishermen, convinced, as Aristotle writes, that it would cut the fishing line above the hook to escape. Cleverness that, together with the thick tail of the known mammal, also justifies the specific term vulpinus = vulpine, foxlike, in Latin. 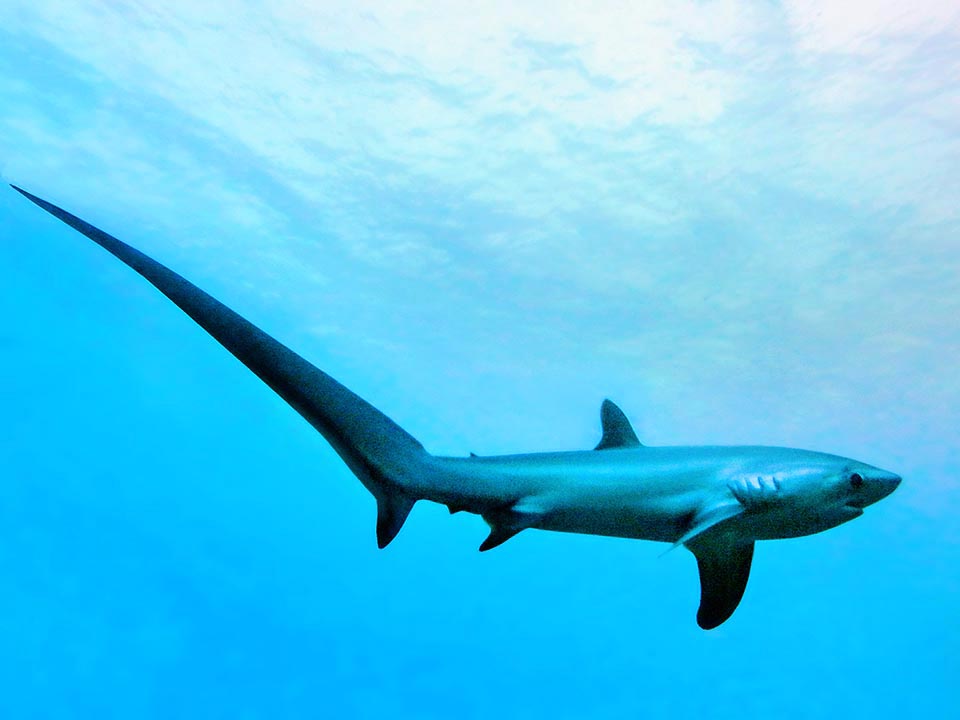 It can exceed 5 m and is the biggest of the 3 species belonging to the genus Alopias, chiefly distinguishing for the short muzzle © Rafn Ingi Finnsson

The Common thresher practically frequents all the seas having temperatures between the 11,6 and 28,2 °C. Therefore, it can, be met also in the Mediterranean, but not, for instance, in the Red Sea, where the water reaches the 33 °C or in the tropics, and of course, it does not frequent the icy polar waters.

Alopias vulpinus is a migratory oceanic pelagic species that may reach the depth of 650 m, even if it usually stays between the surface and the 200 m.

The juveniles grow up along the coasts, chiefly in shallow bays. 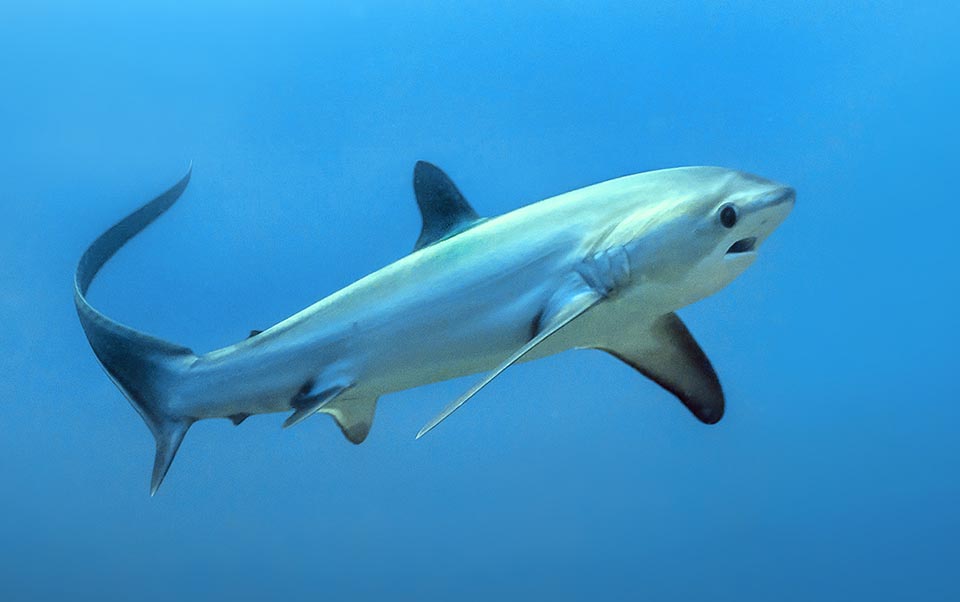 The eyes, higher than wide, are small and don’t have the nictitating membrane. It mainly eats squids and fishes that live in schools, stunned by the violent blows of tail © Ramiro Gonzalez

The maximum reported size is of ,73 m per 348 kg of weight, whilst the current one is of about 4,5 m, tail included, that is longer than half of the body.

The head is stocky with a blunt sub-conical muzzle. The eyes are big, with a vertical pupil having no nictitating membrane, higher than wider, followed by a small spiracle. The nostrils are closer to the mouth than to the muzzle. The latter, of semilunar shape, has 40-42 teeth on the upper jaw and 34-42 below. They are all small and triangular with smooth borders, slightly bigger above and, starting from the fore ones, always more and more inclined inward to hold the preys.

The body is protected by small 2 mm scales, overlapping and keeled to reduce the friction with the water, and the livery varies from silvery blue to dark slate grey on the back, paler on the sides. 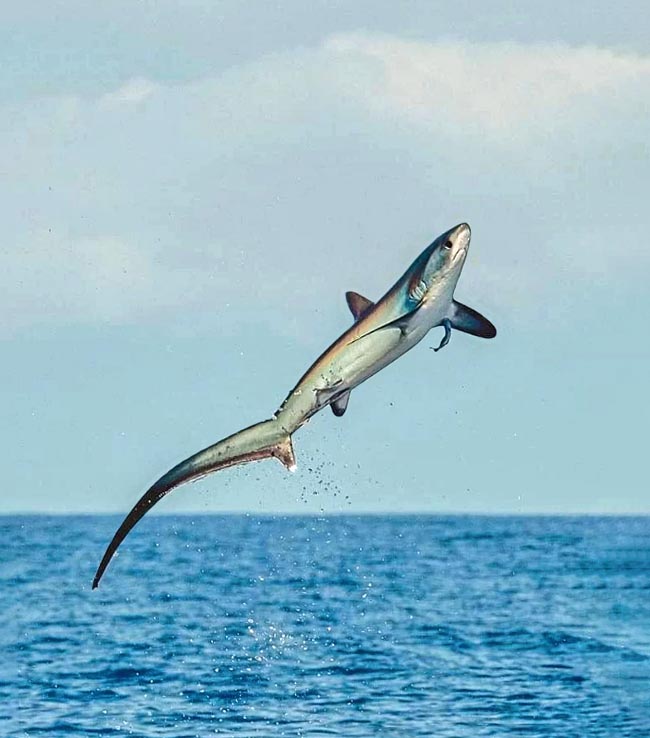 Its body temperature, 2 °C higher than that of the sea, allows the muscles strong accelerations with spectacular leaps out of the water, and in its diet often appear also the seabirds that follow the schools © Ramiro Gonzalez

The five gill slits overlap partially to the large pectoral falciform fins with rounded apex, dark on the lower side, especially on the edges, and a characteristic clear zone at the base that ends up in the ventral white.

The very long lobe of the spectacular heterocercal caudal fin has a notch close to the apex.

As normally happens, the body temperature of the Common thresher should be the ambient temperature, but this, like other Lamnidae, can make it rise about 2 °C,  due to the presence on the sides of a muscular striped tissue with aerobic respiration that contracts emitting heat, and internal striped tissues fed by the so-called “rete mirabile”, a complex of venous blood capillaries surrounded by arteries that warm them up thanks to the warmer blood flow coming from the heart.

This small thermal increase allows an optimum functioning of the sight and the brain, but, most importantly, allows the muscles strong accelerations with spectacular and violent blows of the tail and leaps out of water.

Alopias vulpinus distinguishes from the similar Alopias superciliosus, that reaches at most 4,8 m with the long muzzle, the bigger eyes, the first pectoral fin in rearmost position and especially a deep groove on the nape to which adds a second “rete mirabile” between eyes and brain.

Finally, it distinguishes from Alopias pelagicus, the smallest species of the genus, because of the also here longer muzzle and the second dorsal fin closer to the pelvic ones.

The Common thresher feeds mostly on squids and of fishes that swim in schools, such as herrings, mackerels and sardines.

It gathers them with skillful movements, at times swimming in pairs or in small groups, and then stuns them with blows of the tail to then swallow them calmly, without neglecting , when is the case, the seabirds following the schools near the surface. 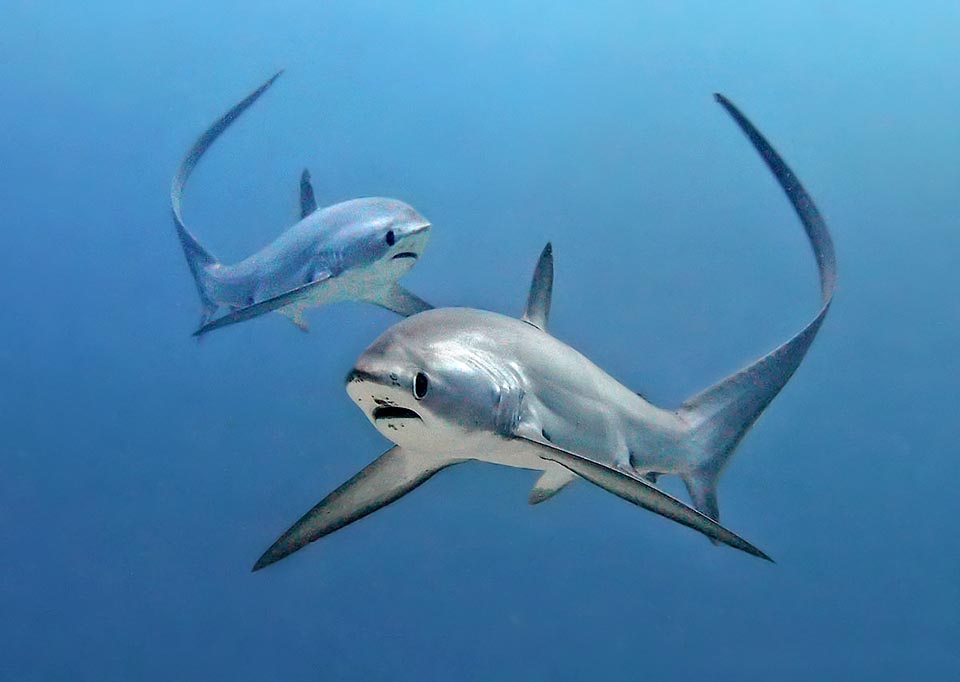 It doesn’t attack man but defends itself with strong tail blows when fished. The females are ovoviviparous and deliver 2-7 pups after a pregnancy lasting about 9 months © Alexey Stoyda

Mating has never been observed, but it is thought that it happens like for the other sharks while swimming with the male restraining the female by biting its pectoral. It must not be an easy task, but she can store the sperm like other selachians and then use it in the following pregnancy.

Alopias vulpinus is an ovoviviparous species. This means that the eggs hatch in the womb and the embryos get out, once exhausted the reserve of the yolk sac, at the expense of the non-fertilized eggs as is the case of Carcharodon carcharias.

They do not attack the other embryos as it happens in Carcharias taurus where the strongest individual eats all the others and do not connect to the maternal blood vessels like in Sphyrna lewini.

In the end, anyway, the birth rate of the Common thresher is low, with deliveries of 2 to 7 pups at most after a pregnancy lasting about 9 months. 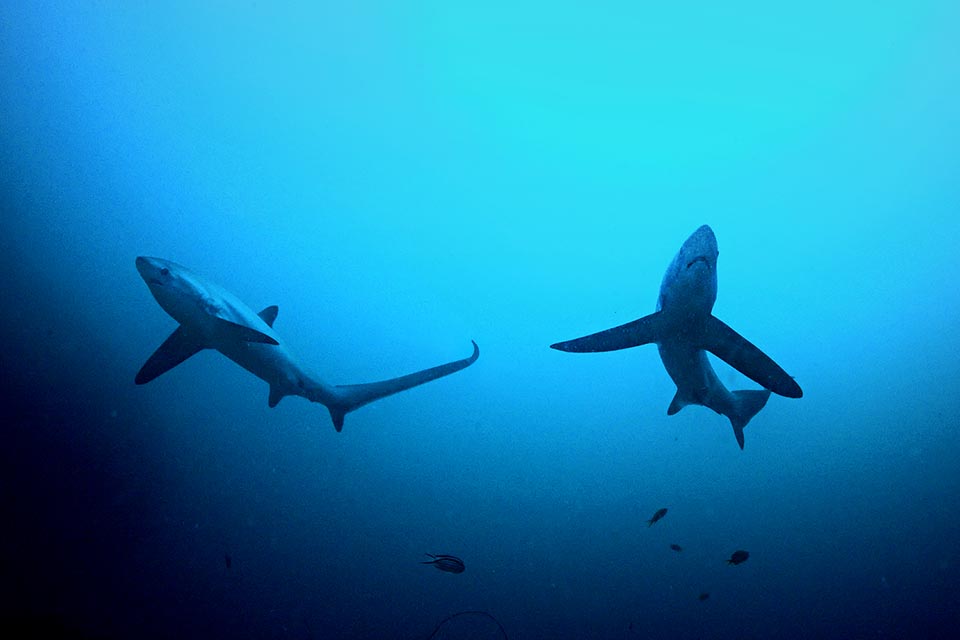 Nobody has ever seen mating, but it is thought that it occurs swimming, with the male holding like other sharks the female biting into its pectoral fin while introducing in its cloaca one of the two pterygopods. Then often they separate, but the females may store the sperm for a long time and use it also in the following pregnancy © Klaus Stiefel

When they see the light, in locations considered safe and habitually utilized by the females, they measure 114-160 cm and weigh about 5-7 kg with a lifespan of 45-50 years.

The males reach the adult age around the age of five, about 3 m long, and the females in the seventh year with sizes varying from 2,6 and 4,5 m depending on the locations.

Alopias vulpinus is a shy fish that moves away when it sees divers. It does not consider man as a prey and doesn’t attack him.

Its natural foe is the Killer whale (Orcinus orca) that often predates in group, but also for the Common thresher the greatest danger is represented by the unscrupulous fishing done buy man, because of its prized flesh consumed fresh, dried, salted or smoked, the liver oil and the skin transformed in leather. 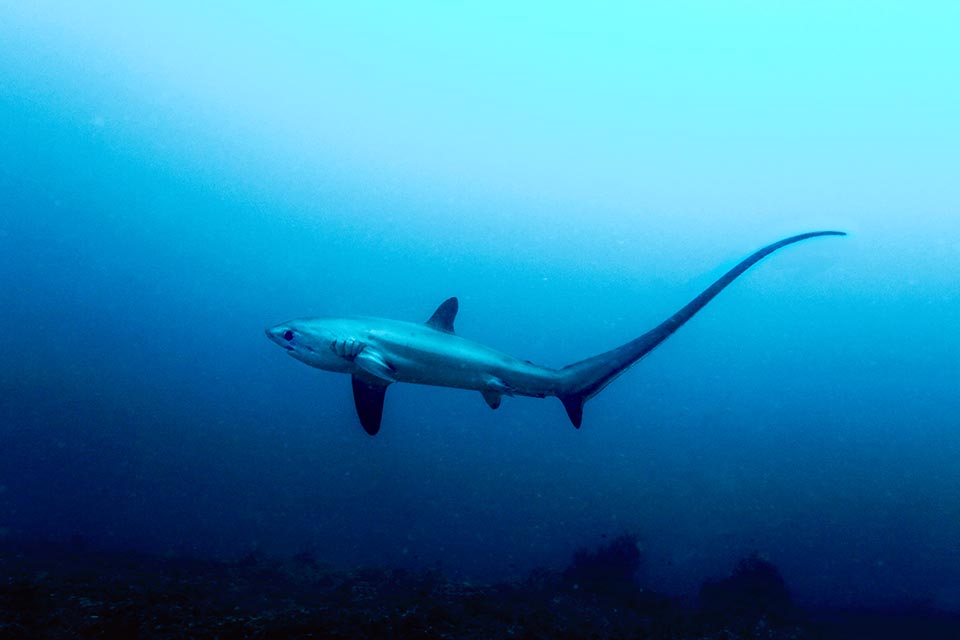 Preyed by killer whales but mainly too fished for flesh, liver oil, rich in vitamins, and the leather gotten from the skin, the Common thresher is now considered vulnerable © Klaus Stiefel

A massacre that in 2006 has touched 411 tons and has led the species into the “vulnerable” category of the IUCN Red List.

Nothing to be surprised about, seeing the low resilience with a minimum time for doubling the populations of 4,5-14 years and a fishing vulnerability index marking today, in 2022, 62 on a scale of 100.