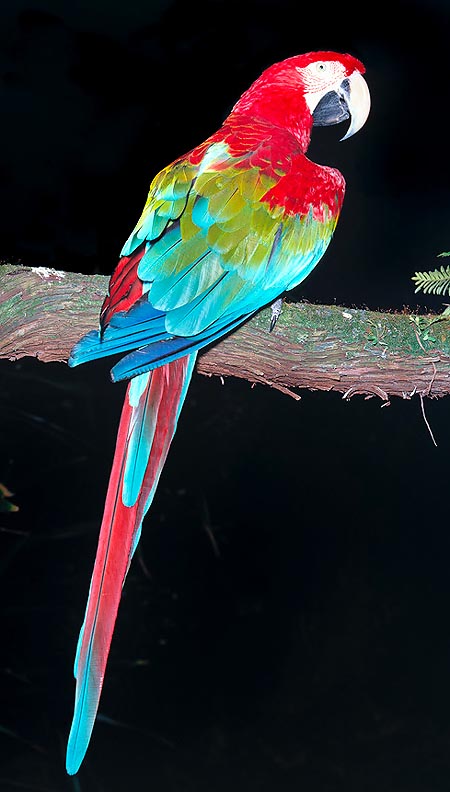 The Ara chloropterus is sociable and noisy © Giuseppe Mazza

The Ara chloropterus Gray, 1859, was discovered and studied for the first time by the English biologist and zoologist George Robert Gray, head of the section of Ornithology of the British Museum, during some of his expeditions in the pluvial forests of South America. He described it in his general work “Genera of Birds”, published in 1860.

A synonym with which it is at times called, even if recently fallen into disuse, is Ara chloroptera Gray, 1859.

This bird, belonging to the order of the Psittaciformes, family of the Psittacidae and genus Ara, can often be mistaken, by the inexperienced, with the Ara macao (commonly called Yellow-red-blue Macaw, or Scarlet Macaw), seen the presence of at least two of these colours, the blue and the red (the yellow in minor extent, replaced by the saurian-green), which can be misleading.

Actually, the Ara chloropterus, called in Italian Ara dalle ali Verdi or Ara rosso e verde; in English Green-Winged Macaw or Red and Green Macaw; and in French Ara Chloroptère, is a similar, but different species.

It is bigger than the Ara macao and the Ara ararauna, and only the Anodorhynchus hyacinthinus is bigger in size and weight, so much that the zoologists and biologists have nicknamed it “good giant”, referring also to its sweet character which renders it, among all species of the genus Ara, the one preferred as companion animal.

Unfortunately, also the Ara chloropterus has been hit by the savage deforestation of the South American pluvial forests, to which is to be added the unlawful traffic of the specimens meant to private persons.

Its population density is nowadays so much reduced that the CITES has forbidden its traffic for commercial purposes, allowing only exchanges between scientific bodies, Zoological Gardens, Aquatic Parks and Zoo-Parks, in the extent of repopulation projects, whilst the IUCN takes care of its monitoring in the wild, and intervenes with protecting programmes.

One typical characteristic is that, between all the species of the genus Ara, it is probably the one having the biggest and most robust hooked and curved beak, so much that the power of its bite has been measured and corresponds to 146 kg per square cm!

It is found in Central America, Panama, going southwards, east to the Andes, up to Colombia. It is found again also in Ecuador and in northern Peru, and is present in the wild also in northern Argentina, in Venezuela, Brazil Guyana, north-eastern Bolivia and Paraguay. 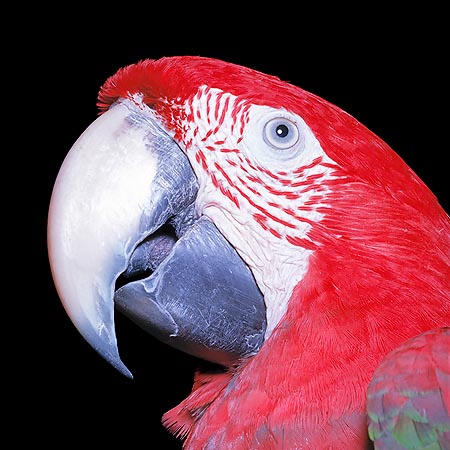 In the wild, it often lives in groups, mixed with other Macaws © Giuseppe Mazza

Tropical, evergreen, pluvial forests, where these parrots lead an arboreal life due to the presence of a zygodactyl foot.

The body and the tail are bright red, the wings have saurian-green (also defined as olive-green) feathers in the part attached to the body (humeral), which is followed by an azure-blue colouration of the coverts. Head and neck are red.

The bare part of the head between the eyes and the lateral part of the base of the beak and the cheeks have a flesh-coloured pink-white skin, marked by bands formed by red feathers barbules, which surround the eyes too.

The beak is opaque white in the upper hemi-portion, the lower one is anthracite grey. Dark and robust claws.

The pullets have a pale colouration, less intense than the adults, with slight yellow dots on the upper wing coverts, which disappear when the sexual maturity is reached.

Therefore, there is dimorphism between males and females. The sex can be determined only by analyzing the karyotype, of the DNA of the feathers (upper coverts), or by identifying the presence of the inner testicles, by laparoscopy. 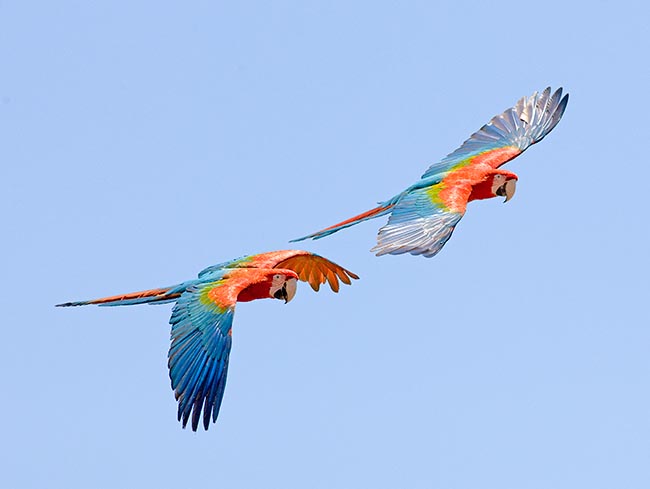 Spectacular flight of Ara chloropterus. In Venezuela the Ara are said' flowers of the forest' © Giuseppe Mazza

In the adult specimens, the iris is black bordered of white, brown in the pullets.

The wingspan of the Ara chloropterus can reach the 124 cm and the total length, head-tail, of the body is of about 96-99 cm.

They live an average of 50-60 years, but in captivity they can reach also the 70.

Always in captivity, there are specimens reported as having reached the 80 years, and some legends relate of specimens having lived up to 100 years!

It has a very friendly character. Noisy in the wild, and it is not rare to meet small mixed groups of Ara chloropterus, Ara macao and Ara ararauna.

When in captivity, it needs much room for moving the wings, ample aviaries are therefore required, equipped with trunks of trees to be barked. 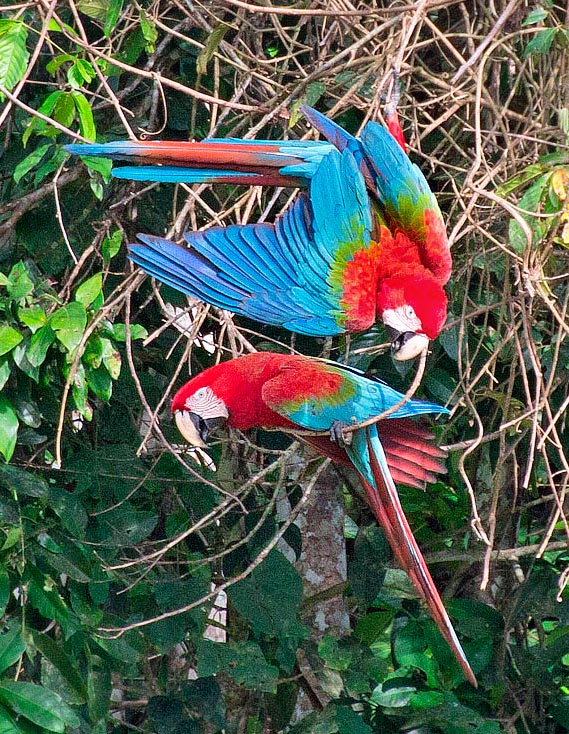 They don’t have a well defined love season, even if in April we note often a peak of activity in preparing the nests and the males become more aggressive towards the conspecifics © Venturini

It is tameable and learns things rather easily. It has also vocal imitating properties, even if in a lesser extent if compared to other species of the genus Ara.

It is frugivorous and granivorous. Thanks to its powerful beak it can nourish of whatever type of seeds and fruits with hard pericarp.

It is greedy of the fruits of the palms of the genus Acrocomia , which are endemic to the Neotropical area, where are found from Mexico to the Caribbean and in South America (southern Argentina).

For what the seeds are concerned, it is particularly greedy of those of two trees belonging to the family of the Fabaceae (Fabaceae): the Copaifera langsdorffii and the Hymenaea courbaril endemic to the Caribbean and central and southern Americas.

In captivity requires a special diet.

In order to simulate the alimentary ecology present in the wild, in the zoos they administer diets based on pears, apples, prunes and bananas, for what the fruits are concerned; cucumbers and carrots for the vegetables, to which are associated cereals such as maize, drupaceous berries, Brazil nuts, groundnuts, seeds of hemp, oats, millet and sunflower.

The Ara chloropterus is a very selective species when choosing the place where to build the nest, which is usually placed in the even cavities of the crags, or in big trunks of trees.

Also the Ara chloropterus does not have a well defined coupling season, even if the month of April has a peak of activity of the males in preparing the nests, and by then they become more aggressive towards their likes.

The female lays 1 to 3 eggs (in some instances even 4), but some (frequently 2) are not fecundated. 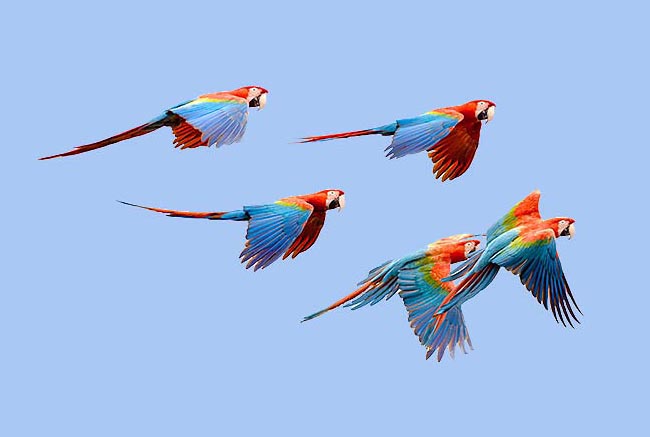 In captivity, when the parents are absent, the nest is to be eyed, in order to avoid that, doing that inn their presence, they become so much aggressive to break (both the male and the female) the eggs not yet opened, or kill the just born pullets.

The incubation lasts about 33-35 days, during which the female receives the food from the male, which will care, after the post-natal life, also the nourishment by regurgitation of the pullets.

The young are weaned when about 12 weeks old. After about 6 months, they leave the nest, fully autonomous in flying and in looking for food.

The IUCN has inserted it in the red list of the Threatened Endangered Species. The CITES controls strictly its traffic. 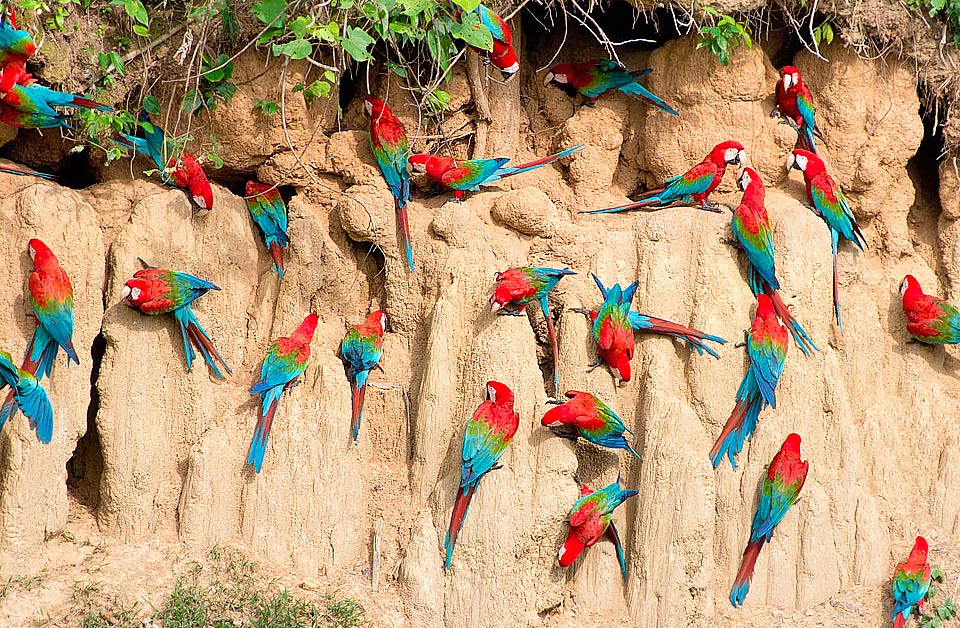 A much frequented clayey slope in Peru. It seems that it is used as source of salts and to absorb the toxic substances of some forest’s fruits © Giorgio Venturini