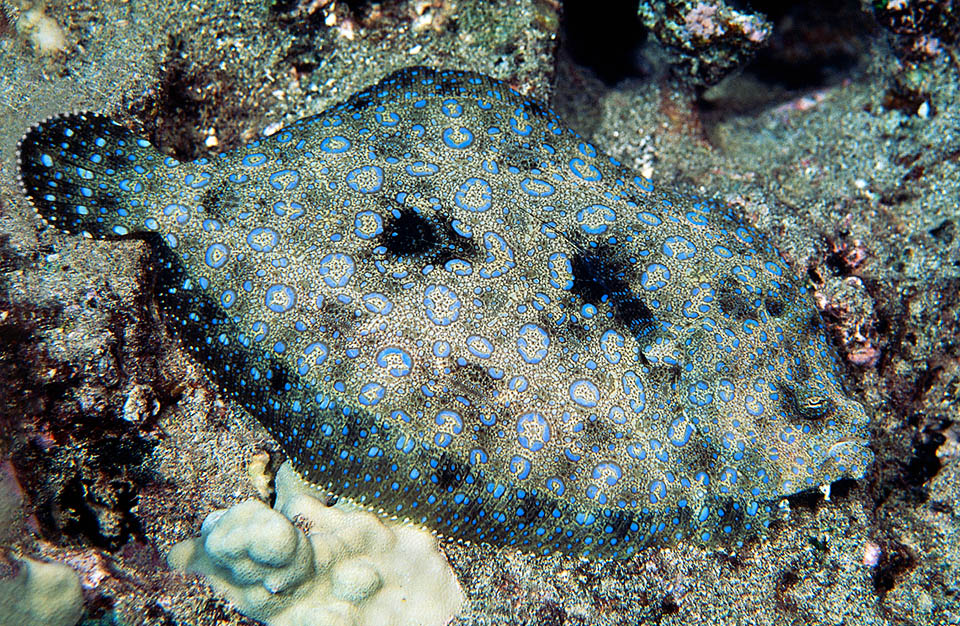 Bothus mancus has incredible mimetic dots similar to flowers. Very vast diffusion in all Indo-Pacific, but absent in the Red Sea © Giuseppe Mazza

The Bothus mancus (Broussonet, 1782), known as Flowery flounder or Peacock flounder due to the imaginative and colourful patterns on the side that is not resting on the bottom, belongs to the class of the Actinopterygii, the ray-finned fishes, to the order of the Pleuronectiformes, rich of more than 800 species, often important for the human feeding such as the European plaice (Pleuronectes platessa)  from which gets the name, and to the family of the Bothidae. This group, diffused in the tropical and temperate waters of all oceans, counts presently 20 genera and more than 164 species among which the analogous White-eyed flounder (Bothus podas) of the Mediterranean, of more modest dimensions.

The name of the genus Bothus, after Rafinesque (1810) who has created it, is the name, after him, that Aristotle gave to this group of fishes, and starting from 1200, we find in various languages the roots “bot, both, bott”, to indicate flat fishes. This name might also come from the Greek “βου” (Boù), an intensifier of the term following, and “Θεο” (theo) = to run, as they usually move on the bottom, without swimming, crawling with rapid movements of the fins, or it might simply mean, in a  broad sense, that it is a strong swimmer, because of the surprising accelerations of which is capable when it moves swimming.

The specific name mancus means in Latin, stump, cripple, due to the right eye that, with the growth of the fish, has moved to the left side, crippling it and obliging it to swim on one side. 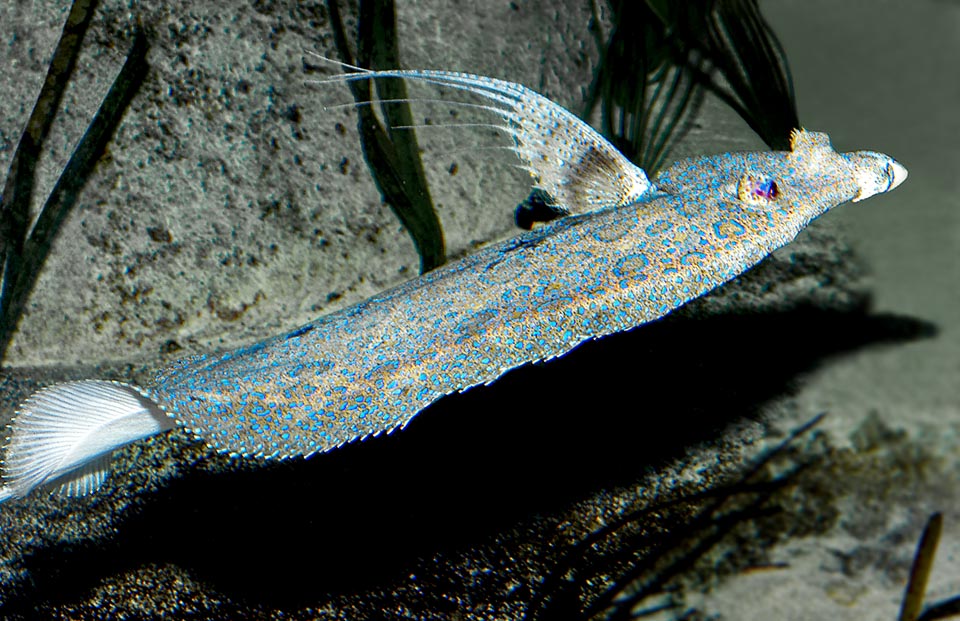 Swims on side, with wavy movements of dorsal and ventral fins. Adult males have on the pigmented side a showy pectoral fin with long filaments © Giuseppe Mazza

The Bothus mancus has an extremely vast distribution in the tropical waters of the Indo-Pacific. It is absent only in the Atlantic and, strangely enough, in the Red Sea. Indicatively, starting from South Africa, we find it in India, Indonesia and Philippines up to the southern coasts of Japan. Southwards, it reaches Lord Howe and eastwards, it goes up to Hawaii, Mexico, Cocos Islands and Chile.

It is a fish typical of the reefs, living between 3 and 150 m of depth. It moves over the madrepores and on sandy or gravelly bottoms, where it disappears, when resting, perfectly imitating them, as it is not rare to find it buried into the sand, where rests or stays in ambush, with those eyes protruding from the bottom like telescopes.

The Flowery flounder can exceed 50 cm in length with a weight of 1,8 kg. 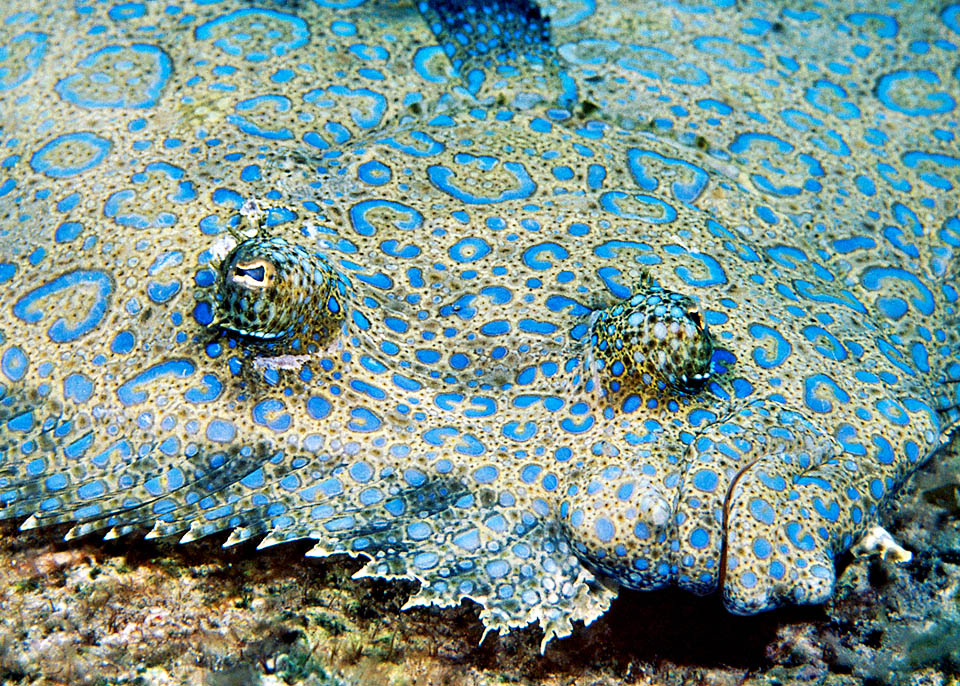 The eyes, raised with respect to the body, move independently, allowing the fish to look at the same time on more sides. They are the ones who pilot the chromophores for almost instantaneous changes of drawings and colours, and in fact, if they are missing or are covered by sand, the fish cannot interact and remains uniformly dark, due to lack of information, like the screen of a turned off computer. The mouth, with tiny teeth on both jaws, is big for swallowing big preys treacherously.

The shape of the body is elliptical, more roundish in the young specimens. The part touching the soil is yellowish white and the livery of the visible side, dark brown in absence of orders, is covered by small dots and imaginative designs with blue outline, similar to daisies. Often are noted two big dark spots: the first where the lateral line draws an elbow before the final straight and the second one halfway through the latter. Less marked, there is a third smaller spot on the first part of the caudal peduncle. 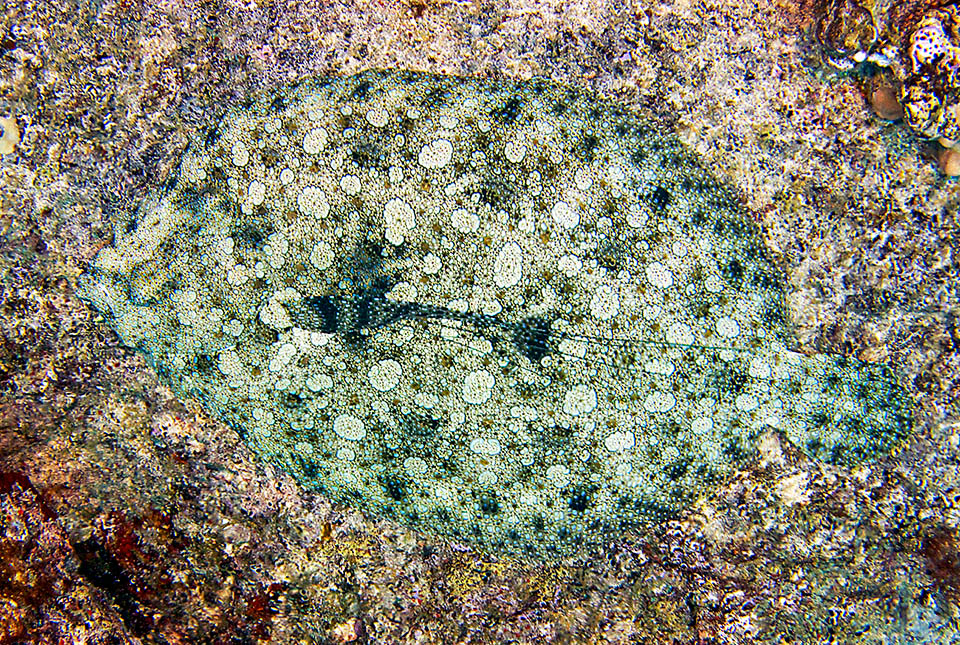 Resembles a fossil, but it’s a well camouflaged specimen on a rock. Changes of colour and design, piloted at sight, are almost instant © Giuseppe Mazza

The Bothus mancus is mainly a nocturnal predator. It goes hunting in ambush the small fishes swimming close, but also small shrimps and crabs.

Depending on the locations, it reproduces between late winter and early spring. The elongated pectoral fin of the male seduces the female who may spawn 2-3 millions of eggs. These are floating, thanks to the presence of a small oily dot, and once fecundated they rise to the surface. to be finally carried far away by the currents. During the second week, the small drop has melted and so they sink down for hatching by the fifteenth day. The larvae will then wander around, again on the surface, for 4-6 months, time necessary for the growth of the small fishes and the migration of the eye.

Even if some young specimens end up in an aquarium due to the splendid and astonishing livery, it’s a species fished locally for human feeding. Resilience is modest, seeing that 4,5 to 14 years are needed for doubling the species decimated by the events, but the diffusion of the species is very vast. As a consequence, the vulnerability index is moderate, as presently marks 41 on a scale of 100.