Bromeliaceae: the pineapple and its ornamental relatives

History of pineapple and similars plants : the Bromeliaceae. 1.400 species of tropical America which adapt to impossible situations even to living on air. Many are indoor plants. 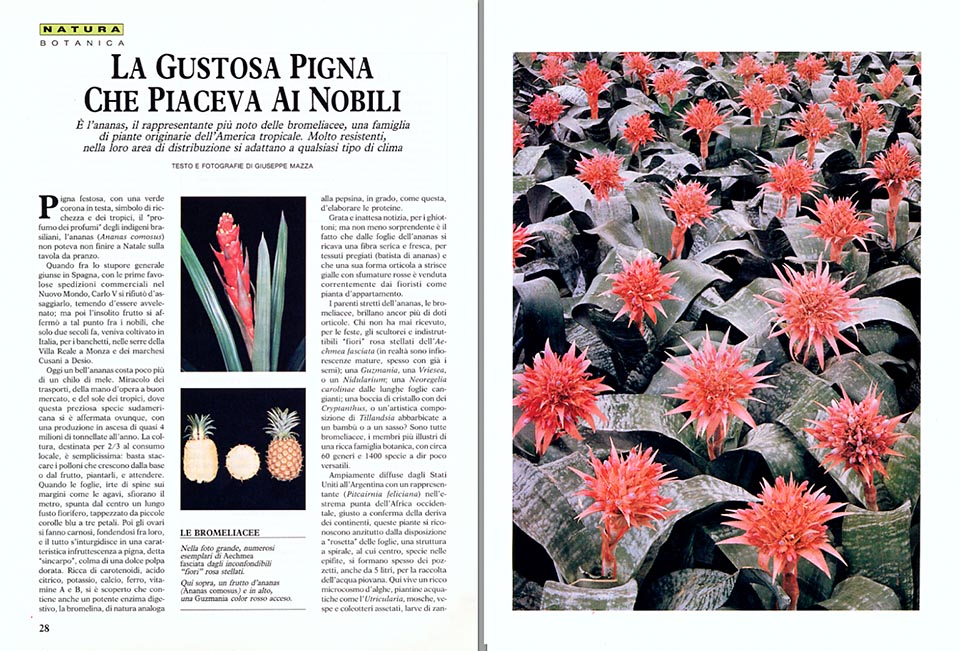 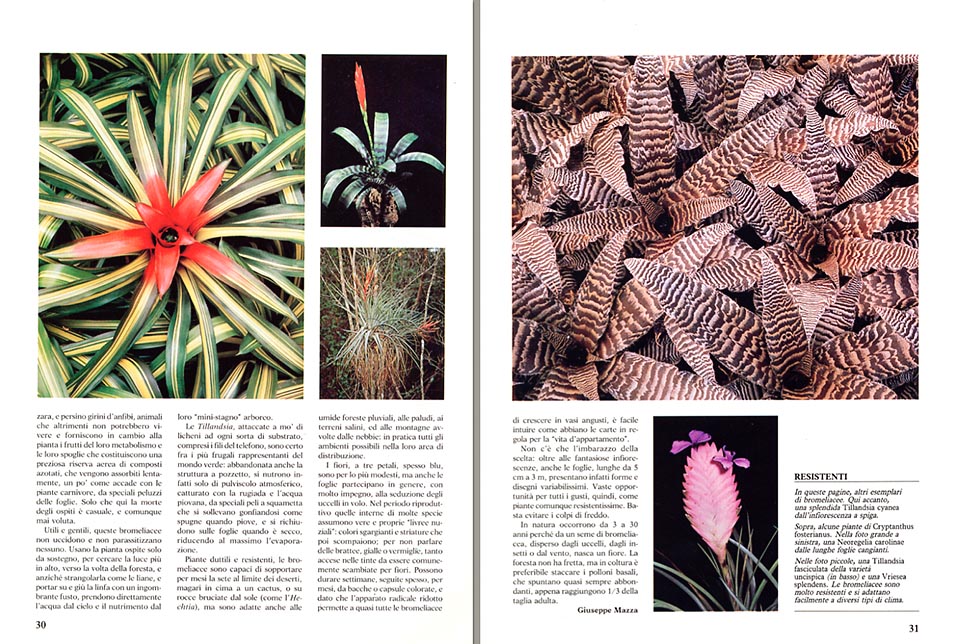 Joyful cone, with a green crown on its head, symbol of wealth and of the Tropics, the “scent of scents”, of Brazilian natives, the Pineapple (Ananas comosus), could not avoid to reach the dinner table on Christmas day.

When it reached Spain, among the general astonishment, with the first legendary commercial expeditions in the New World, Charles V refused to taste it, afraid of being poisoned; but later the unusual fruit became so popular between the persons of rank, that only two centuries ago, it was cultivated in Italy, for the banquets, in the greenhouses of Villa Reale, in Monza, and in those of the Marquis Cusani, in Desio.

Nowadays, a nice pineapple is just a little more expensive than a Kilo of apples. Miracle of transportations, of cheap labour, and of the Tropical sun, where this precious South American species has reached all places, with an increasing production of almost 4 millions of tons per year.

The cultivation, foreseen for the 2/3 for local consumption, is very simple. It is sufficient to take off the shoots which grow up from the base or from the fruit, to plant them, and wait. When the leaves, full of spines on the edges, like the agaves, are close to the metre, from the centre comes out a long flowering stem, covered by small three-petals blue corollas.

Then the ovaries become fleshy, melting each other, and the whole swells in a typical pine-shaped infructescence, called “syncarp”, filled with a sweet golden pulp. Rich of carotenoids, citric acid, potassium, calcium, iron, vitamins A and B, it has been discovered that it contains a strong digestive enzyme, the bromelian, of nature similar to the pepsin, capable, like this last one, to elaborate the proteins.

Agreeable and unexpected news, for the gourmands; but not less surprising is the fact that from the leaves of pineapple we obtain a silky and fresh fibre, for valuable fabrics (batiste of pineapple), and that a horticultural form with yellow stripes with red graduations, is commonly sold by florists as apartment plant.

The close relatives of the pineapple, the Bromeliaceae, hold even more horticultural qualities.

Who has never received, for the festivities, the sculptural and indestructible pink stellated “flowers” of the Aechmea fasciata (really, they are ripe inflorescences, often already with the seeds); a Guzmania, a Vriesea, or a Nidularium with more ardent liveries than Santa Klaus; a Neoregelia carolinae, with the long changing leaves; a crystal bowl with some Cryptanthus, or an artistic composition of Tillandsia glued to a bamboo or a stone?

They are all Bromeliaceae, the most illustrious members of a rich botanical family, with about 60 genera and 1.400 species, versatile, to say the least.

Widely spread from United States to Argentine with a specimen (Pitcairnia feliciana), in the extreme point of Western Africa, just to confirm the drift of continents, these plants are identified, in the first place, by the disposition , like a “rosette”, of their leaves.

A spiral structure, where, at the centre, particularly in the epiphytes, some small wells often develop, even with a capacity of 5 litres, for collecting the rainy water. A rich microcosm of algae, aquatic small plants, such as the Utricularia, flies, wasps and thirsty coleopters, mosquitoes’ larvae, and even tadpoles of amphibians: animals that otherwise could not live and furnish, in exchange, to the plant, the fruits of their metabolism and their remains.

A precious aerial of nitrogenous compounds, which are slowly absorbed, as it happens for the carnivorous plants, by special little hairs of the leaves. With the difference that, in this case, the death of the guests is unforeseen, and anyway, never desired.

Useful and kind, these Bromeliaceae, they do not kill a do not become parasite of anyone. They use the guest plant only as a support, to look for the light on top, towards the vault of the forest, and instead of strangling it like lianas do, and carry up and down the lymph with an encumbering stem, get directly the water from the sky, and the nourishment from their arboreous “mini-pond”.

The Tillandsia, attached like lichens to all sort of substrata, telephone cables included, are by sure among the most frugal specimen of the Green World. Abandoned also the small well structure, they nourish in fact only of motes, caught with the dew and the rainy water, by special scaled hairs which rise swelling like sponges when it rains, and close up, on the leaves, when it’s dry, thus reducing the evaporation the the maximum extent.

Supple and resistant plants, the Bromeliaceae, capable to stand, for months, the thirst at the limit of the deserts, even on top of a cactus, on rocks burnt by the sun (Hechtia sp.), but suitable also for the wet rainy forests, the marshes, the salty grounds, and the mountains wrapped by fogs: practically in all possible habitats in their area of distribution.

The flowers, with three petals, often blue, are usually modest, but also tje leaves participate, generally, with great commitment, to the seduction of flying birds.

In the reproductive period, the internal ones put on real and proper “nuptial liveries”: garish colours and stripes which later on disappear; not to talk about the bracts, yellow or vermilion, so much bright in the colours to be commonly mistaken as flowers. They can last weeks, often followed, for months, by berries or golden capsules, and seen that the radical apparatus, very reduced, allows to almost all the Bromeliaceae to grow up in narrow pots, it’s easy to realize that they are perfectly suitable for the “apartment life”.

There is only the embarrassment of choice: besides the fanciful inflorescences, also the leaves, long from 5 cm to 3 metres, show, in fact, very variable forms and drawings. Ample opportunities for all tastes, therefore, with plants which are, in any case, very resistant.

It is sufficient to avoid cold strokes (temperature should never go under the 16 °C), and reduce the watering in winter, when these species rest, and humidity, with the cold, might easily cause rottenness.

From 3 to 30 years are needed, in nature, till when, from a seed of Bromeliacea, dispersed by birds, insects or wind, a flower comes up. The forest is not in a hurry, but in cultivation, it is better to take off the basal shoots, which usually are abundant, as soon as they reach 1/3 of the adult’s size.

→ To appreciate the biodiversity within the family BROMELIACEAE family please click here.

Bromeliaceae: the pineapple and its ornamental relatives was last modified: May 15th, 2019 by Giuseppe Mazza