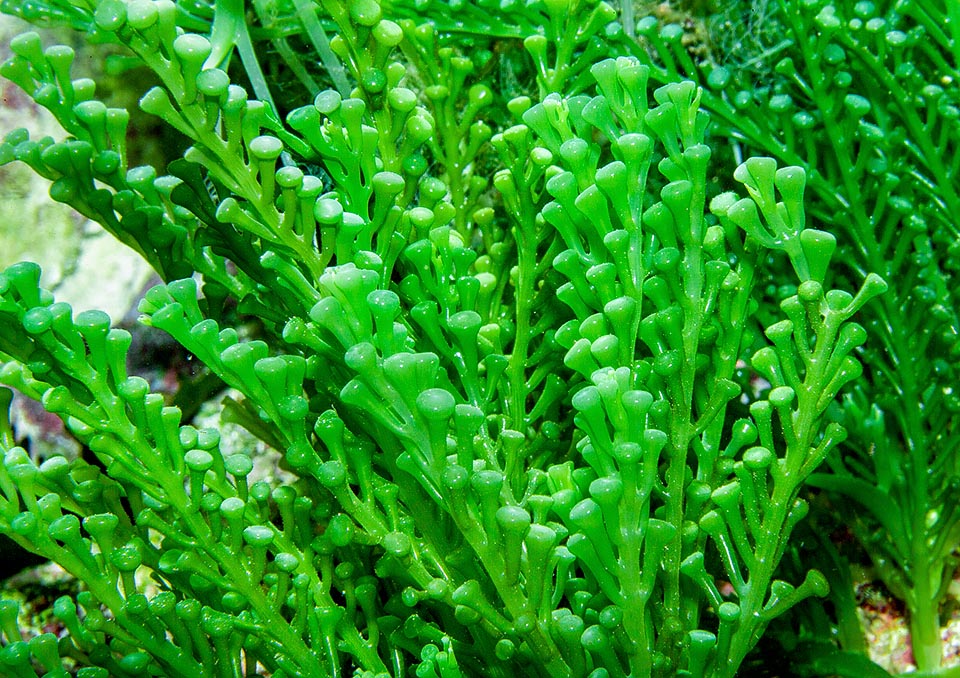 Native to Australia, the Caulerpa racemosa is a green marine alga with 30 cm fronds and characteristic cluster swellings © Giuseppe Mazza

Described for the first time in Australia, the Caulerpa racemosa (Forsskål) J.Agardh, 1873 is a green marine alga (Chlorophyta) belonging to the family of the Caulerpaceae, like the well known Caulerpa prolifera of the Mediterranean or the infamous Caulerpa taxifolia native to Australia, Central America and the African coasts.

But if the Caulerpa taxifolia sold for the aquaria has accidentally infested the prairies of Posidonia along the Mediterranean coasts, the Caulerpa racemosa with the variety Caulerpa racemosa var. cylindracea has proved even more aggressive. The first one, in fact, formed only by cloned specimens, has never reproduced sexually in the Mediterranean and starting from 2004 is losing ground due to a molecular degeneration, whilst this last reproduces also sexually in our seas adapting always better to the new environments.

The genus Caulerpa comes from the Greek (καυλόϛ) “caulós” = stalk, stem and from (ἕρπω) “herpo” = to creep, whilst the name of the species racemosa comes from the Latin “racemósus, a, um” = in clusters, due to the curious look of the laminae as is highlighted by the English name of “Sea Grapes” or the French one of “Caulerpe raisin”. 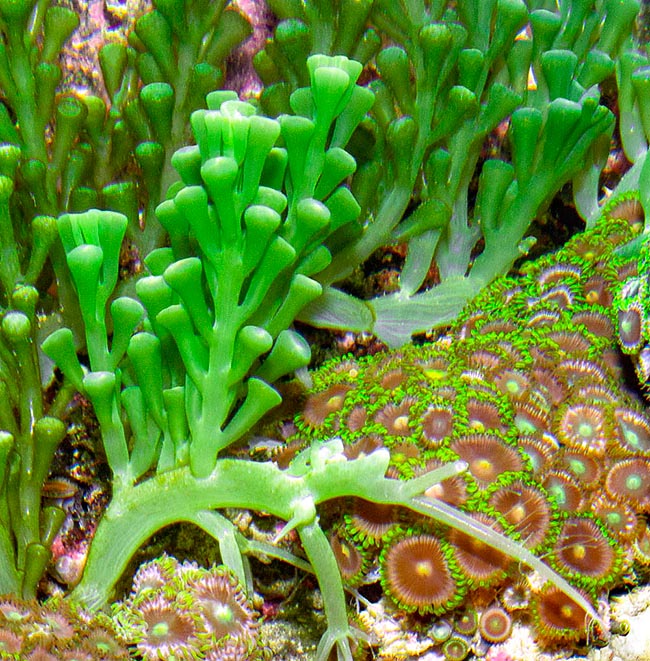 The Caulerpa racemosa grows, like all green algae, in rather shallow waters, with a predilection for the tropical and temperate climates.

The thallus appears divided in a creeping stem with rhizoids, the “roots” of the algae that unlike the vascular or tracheophyte plants (Tracheophyta) do not absorb the nutrients but serve uniquely to fix on the bottom, and showy fronds, composed by a central rachis from which several grape or club-like ramuli emerge, forming a structure that can be up to 30 cm high.

They grow ramifying on a creeping stolon that produces new fronds, one close to the other with the characteristic cluster swellings.When they break, due to the waves of the fishes, few millimetres fragments are sufficient to regenerate the plant. If in laboratory the alga is turned upside down, in short time gets out a stolon under and the growth resumes. An endless process even if in the Mediterranean, where it has arrived stuck to the keel of the ships coming from the Red Sea, there is a moment of winter rest.

It is a giant unicellular organism with a huge number of nuclei and the chloroplasts, that serve for the chlorophyll photosynthesis, are free to move inside it for receiving better the sun rays.

Moreover, this monoecious species, as well as vegetatively, can also reproduce sexually. It utilizes, emptying, all the cytoplasm to create male and female gametes that merge at sea creating swimming spherical zygotes, a “green cloud”, that reduces the visibility to less one metre when, as often occurs, the reproduction takes place in mass.

We do not know yet how they can synchronize these “group weddings” that are not linked to the lunar cycles or the tide, but in Mediterranean and in the Caribbean often happen just before dawn. The zygotes swim, at the most, for one hour and then fix on the bottom creating in the space of just 5 weeks, new plants. Nothing surprising, therefore, that this is considered as an invasive species.

On the other hand, being rich in fibres, calcium, magnesium, proteins vitamins C, A, B1 and B9, the Caulerpa racemosa is often consumed in salad by the populations of South-East Asia and even cultivated for the Japanese market. Furthermore, it may reduce the arterial hypertension and displays antibacterial and anti-fungal properties. 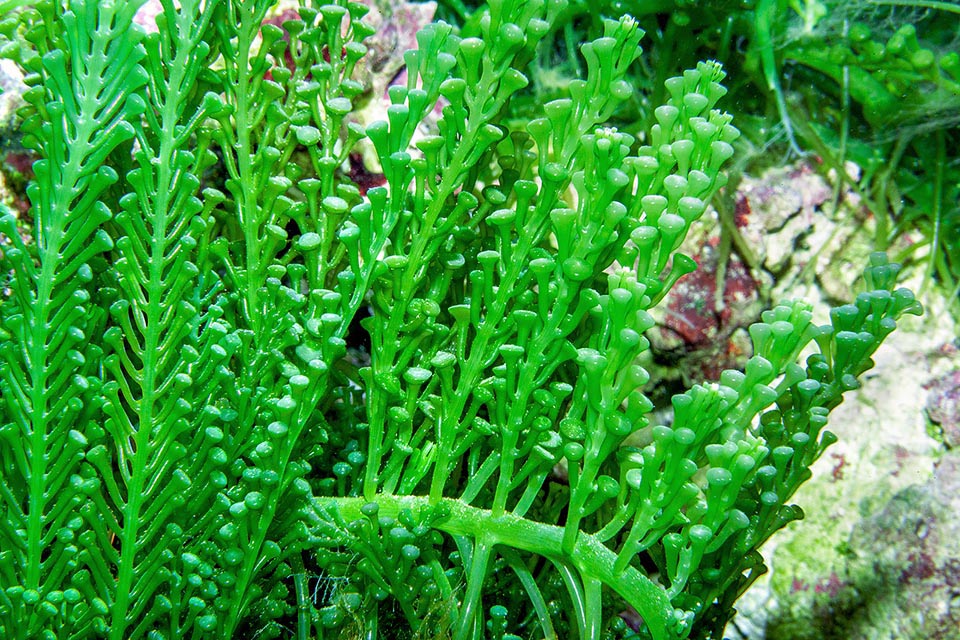 It is an edible species with known medicinal virtues, but carried by the keel of the ships, has invaded many temperate seas among which, from 1990, the Mediterranean where it reproduces also sexually unlike an earlier invader, the Caulerpia taxifolia, coming from the aquaria market and accidentally escaped from a pool © Giuseppe Mazza

Like the Caulerpa taxifolia that while breaking releases a venomous latex containing caleurpin, also the Caulerpa racemosa utilizes, though in minor extent, this venom that seems harmless for the man but is harmful for many marine herbivorous invertebrates such as the Motted Sea Hare (Aplysia fasciata). Some fish of the Mediterranean, such as the Salpa (Sarpa salpa), if there is nothing better, graze, breaking it in pieces, more willingly than the other and it is getting the upper hand everywhere.