The Oval spot butterfly fish (Chaetodon speculum Cuvier, 1831) belongs to the class of the Actinopterygii, the ray-finned fishes, to the order of the Perciformes and to the family of the Chaetodontidae that hosts about 90 butterflyfishes.

The name of the genus Chaetodon comes from the Greek “χαίτη” (khaite) = hair and “ὀδούς” = tooth, due to the teeth shaped like bristles, whilst that of the species, speculum, in Latin means mirror, because of that oval spot it has on the sides looking like a mirror.

The Chaetodon speculum is present in the tropical waters of a good part of the Indian Ocean and in western Pacific. We find it along the coasts of Madagascar and in the adjacent islands of Réunion and Mauritius. Then, indicatively, eastwards, in India, Christmas Island, Malaysia, Indonesia, Philippines, Vietnam, China, Taiwan with RyuKyu islands, Palau, Papua New Guinea, in the Australian Great Barrier Reef, New Caledonia, Micronesia, Vanuatu, Fiji and Tonga which marks the eastern limit of the species. 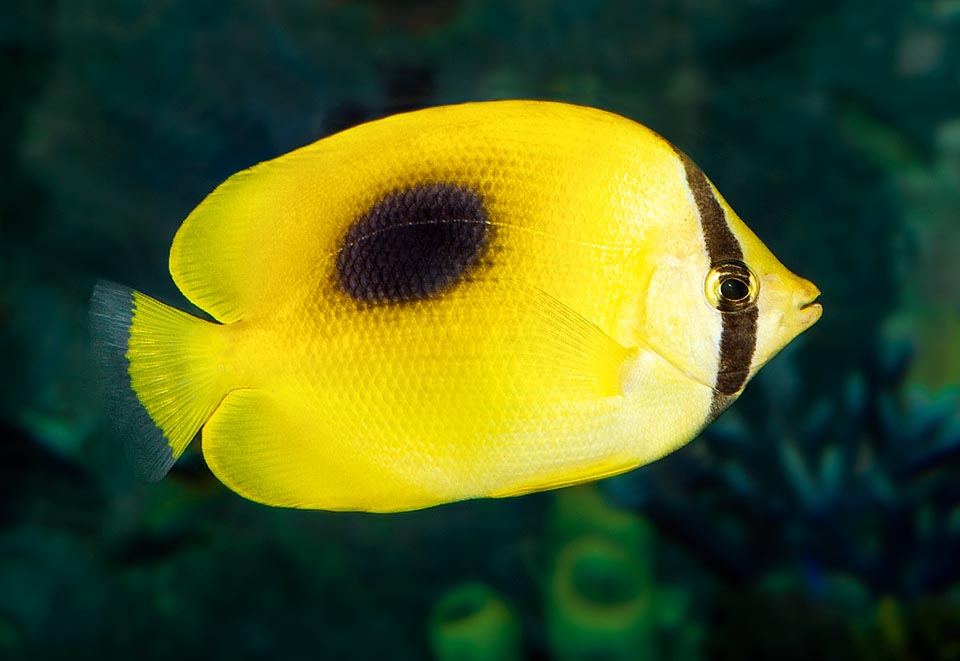 The Chaetodon speculum is present, along the coasts, in most of the tropical waters of the Indo-Pacific © Giuseppe Mazza

The Chaetodon speculum swims in relatively shallow waters, in the lagoons and on the outer side of the reefs, between 3 and 30 m of depth, but more often around the 10-15 m, among madreporic formations rich of Corallimorpharia.

It may reach the 18 cm. The body, oval and flat laterally as in most of the cases of Chaetodon, has a relatively short snout.

During the night the splendid livery disappears and the fish gets whitish, keeping however the characteristic black spot on the sides. 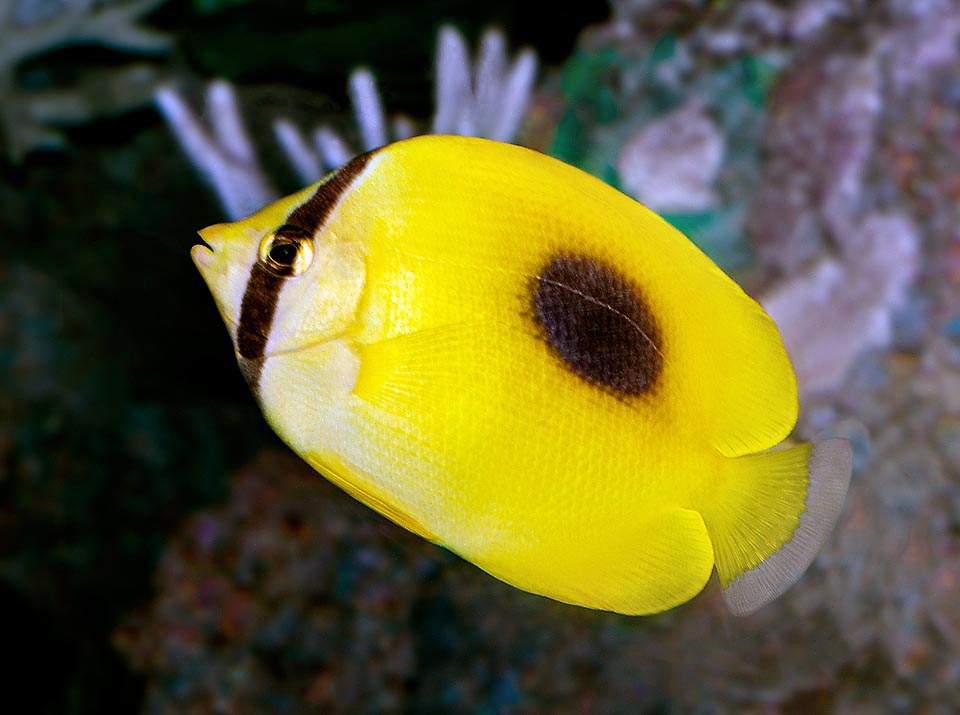 It is unique due to the characteristic oval black spot, not edged, on the sides. It eats polyps of madrepores, zooplankton, small crustaceans and algae © Giuseppe Mazza

The Oval spot butterfly fish nourishes of polyps of madrepores, anemones fungi and hydrozoans, but also of small crustaceans and other benthic invertebrates it finds rummaging between the corals. It reaches the maturity in the second year of life and then often form stable couples.

For the marriage the spouses often get up to the surface and the fecundation takes place mid-water, with the eggs fecundated on the flight by the male and then abandoned to the currents. They hatch on the following day and the pelagic larvae go drifting for a couple of months until when the small fishes are able to swim and move towards the bottoms. They are about 12-15 mm long and often get shelter among the arms of the arborescent corals where they grow up hidden among the sharp points that discourage the predators.

Nowadays (2020) it is not an endangered species. In case of need, the populations may double in less than 15 months their members and the vulnerability index marks only 14 on a scale of 100.