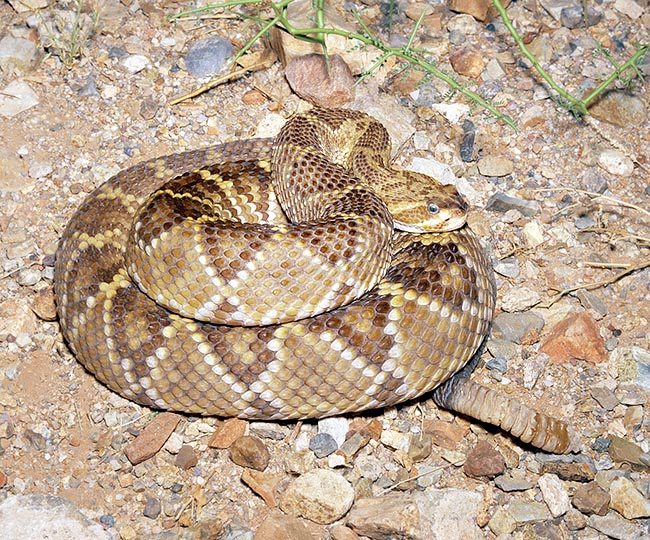 The Mexican green rattler (Crotalus basiliscus Cope, 1864) is a Viperid (Viperidae), belonging to subfamily of the Crotalines (Crotalinae), typical of the western coastal plains of Mexico facing the Pacific Ocean, is a big serpent, whose dangerousness is somewhat overvalued by the local populations, and is known also as green Cascavel, as it has a certain resemblance with the feared Crotalus durissus, one of the most dangerous American serpents.

As a matter of fact, its length is of one metre and a half, with a record of 205 cm and with a remarkable diameter, which bestows it a stocky appearance, even if not as squat as some big African viperids (Bitis gabonica gabonica, Bitis nasicornis) and the section of the body is not roundish or triangular, but rather grossly rectangular.

The dimensions, obviously, may have a significant impact on the dangerousness when we talk of a nervous and aggressive snake, due to the length of the fangs, which, in this species may reach the 25 mm, and which can deeply inoculate the venom (if we are unlucky, even a blood vessel, with much quicker effects), as well as due the distance to which it can strike. All these factors, united with its very bad reputation, not always entirely deserved, make it a much feared animal in the zones where it is common. The clarification “not always deserved” does not want to be a minimization of its dangerousness, but it refers to the fact that, as is the case of almost all snakes, also the Crotalus basiliscus does not consider the man as a prey, whereby tends to avoid, wherever possible, the close encounter.

Unfortunately, as it occurs in most of the viperids, with or without the thermo receptor dimples, present, as in all the crotalines, in this species, it is an animal which often entrusts its security and defence from the predators, not to a rapid escape but to the immobility, technique it often utilizes also for hunting, as the ambush, entrusted to the camouflaging, is its choice strategy.

This means that it is not rare to get too close to it, or even to hit it with a foot, or walking over it and in such instances the reaction is instantaneous.

The head is wide and flattened, grosso modo triangular, with the eye having an elliptic vertical pupil and the thermo receptor dimples are well evident. 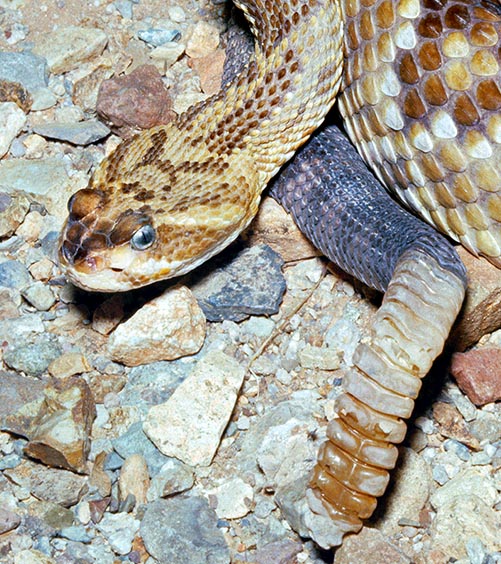 On the head of the juveniles is present a dark dot which anyway fades and disappears with the age, but even the adult shows a dark stria behind and under the eye.

The colour of the head is usually clearer than the rest of the body, which is green, in different hues, or yellowish, or even tending to the ochre, with evident patterns of rhomboidal or diamond-like shape, of reddish colour, but with paler central parts and borders.

The juveniles have a more reddish background but the dots are equally evident. The ventral parts are paler than the back and the sides.

A curious feature of the bigger specimens stands in a marked prominence of the spiny processes of the vertebras which form a sort of a dorsal crest, absent in the Cascavel (Crotalus durissus) and which facilitates its recognition. The tail is grey or whitish and on it stand out from six to twelve dark transversal striae, which give it a “zebra” appearance.

Of terricolous and nocturnal habits, it mainly hunts small mammals, rodents (rabbits, mice, rats, squirrels) in particular, but it can predate also chicks of ground nestling species, amphibians and reptilians. Like many other serpents it is particularly active after the rains, and in such circumstances it may hunt also during the day. The morning hours are the preferred ones for the “basking”, in a sunny location or on a road, in order to absorb its heat. If disturbed, it assumes a posture of defence-attack characteristic to other rattlesnakes and many vipers, such as the Bitis arietans, with the head raised and retracted and vibrates rapidly the caudal part, this last being typical, as known, of the crotalines.

The venom is excreted in high doses, even if not so much as the diamondbacks, and the average quantity is of about 100 mg. Still not yet perfectly studied, it has a cytotoxic and hemotoxic action, but does not have the neurotoxic one which renders the bite of the Cascavel (Crotalus durissus) one of the deadliest amongst the American rattlesnakes. Its bits, therefore, even if not rare, do not seem to have a high mortality rate, perhaps also because it does not always inject venom in a defensive bite and not for predating (dry bites).

It is an ovoviviparous reptilian and the female delivers from 20 to 35 young, perfectly developed. An odd characteristic is the facility with which it crosses and breeds with specimens of Crotalus molossus.

The distribution range starts from Sonora, in the south, and includes Sinaloa, Nayarit, Colima and the Tepalcatepec Valley. The preferred habitat is the thorny and relatively arid bush, the more humid deciduous forest, due to the closeness to the ocean, and the transition belt between the deciduous forest and the coniferous one, so much that, even if not being a species preferring the plan, in the Michoacan it is encountered also at rather high altitudes, in mixed woods of oak, spruce and pine trees and it has been reported at 2400 metres on the Sierra de Coalcoman and on Cerro Barolosa.