It gets the name from a biologist, William Price, who, the first, described it. Two subspecies are admitted, Crotalus pricei pricei and Crotalus pricei miquihuanus : whilst the first is diffused in Mexico as well as in a portion of the southern USA (Arizona), the second one is limited to Mexico (Nuevo Leòn, Tamaulipas and Coahuila).

It is a small viperid usually not exceeding the half metre of length, with records of 65 cm, with background colour ash grey or grey-light blue, often tending to pale, and at times reddish or brick, on which stand out two series of dorsal spots, paired and placed at the sides of the median dorsal line (whence, one of the English common names: twin spotted rattlesnake). The ventral parts are paler and of cream or whitish colour, usually with fine darks dots. The head is depressed and triangular, with eyes with elliptic vertical pupil and presence of thermo-receptor dimples which allow the small predator to perceive the proximity of warm-blooded preys even if they do not move or if in the dark. The head is neatly distinguished from the neck and the tail has the usual series of corneous rings which, when the tail vibrates quickly, produce an acute buzzing.

As per its tendency, it is an “upland” reptilian that can be met between the 1000 and the 3200 metres of altitude above the sea level, whereby, in the cold season, it often hibernates, taking advantage of natural shelters or dens dug by mammals or other animals. It is therefore a specialist of mountainous zones and of often rocky grounds and at times also of sandy ones, and the specimens with reddish or rusty coloured background are more frequently found where the rocks do have “ferrous” tints, whilst the grey prevails in habitats with rocks having paler and neural colours or on the heaps of stones. 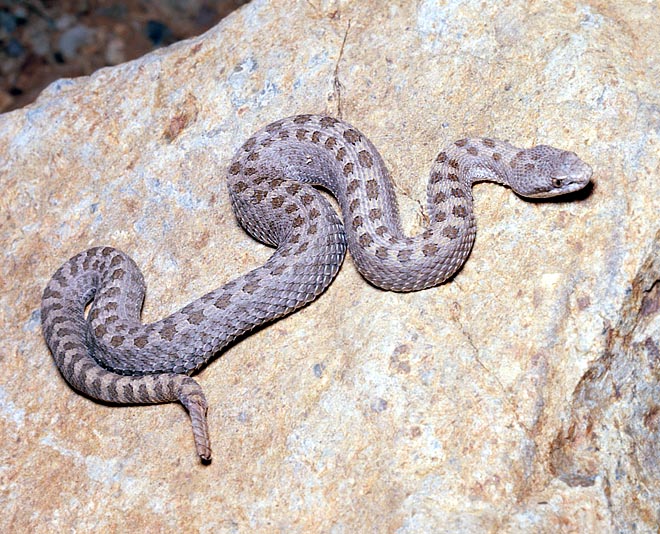 It is fairly common in Mexico also in the mountain prairies of on the bottom of those grassy valleys typical of certain areas, where various species of terricolous rodents and birds nidifying on the ground offer abundance of prey. Another characteristic habitat is represented by the sparse woods of Mexican pinyon (pinus cembroides), conifer furnishing a sort of edible pine nuts for the man but appreciated also by squirrels, mice and other small animals, that can be excellent preys of this small rattlesnake.

The slopes facing the South, with mixed vegetation of Pinus cembroides and agaves, are also a suitable place for those seeking to see one of these nice serpents, which often may be seen while “basking” in the sun, especially early in the morning.

Some populations perform true and proper small migrations from the summer quarters to the winter ones, for finding a better shelter due to the forthcoming hibernation (often partial and interrupted by the sunny and warmer days) as well as, at times and where the climate conditions are more favourable, to stay without it and keep a certain level of activity also during the winter months.

Even if equipped with a nocturnal animal eye, Price’s rattlesnake stands among the most diurnal crotalids and waits for the passage of lizards and small mammals, which it hits with a rapid bite, injecting cytotoxic venom that, besides killing the prey, begins to pre-digest the same from the interior, rendering it more easily separable once swallowed. If the prey is small, like a lizard, it is seized, held and quickly swallowed; if it is bigger or if in condition, potentially, to hurt the predator, such as some rodents having cutting incisors and sharp nails, after the bite, it is quickly released and then plotted, by means of the biforked tongue and the Jacobson’s organ, found by this time dead and harmless and then is swallowed whole, starting from the head. Cases of cannibalism are reported, with ingestion of smaller congeners.

The venom of Crotalus pricei is fairly powerful, but is secreted in modest quantities, therefore a possible bite is decidedly less serious than that of a big crotalid, furthermore, also the minor length of the poison fangs, of solenoglyphous type, and the lesser action range of its “extension” render it not particularly dangerous, but in any case it is a reptilian to be treated with the due respect, also because it is rather ready to bite if disturbed, even if it doesn’t have the “gory” temper of other serpents, such as the cascavels or the diamondback rattlesnakes. The venom has cytotoxic, swelling, action, and also with action on the coagulation, but the bites interest mainly those catching them or handling them for hobby, even if also hikers, hunters and mountaineers might be at risk, especially if they put their hands where their eyes do not get, like during the collection of firewood or while looking for a hold in climbing a rock.

The couplings take place in summer, and the births, with the bringing in the world of alive babies and not wrapped in the egg, as it is an ovoviviparous animal, occur by late spring or early summer.