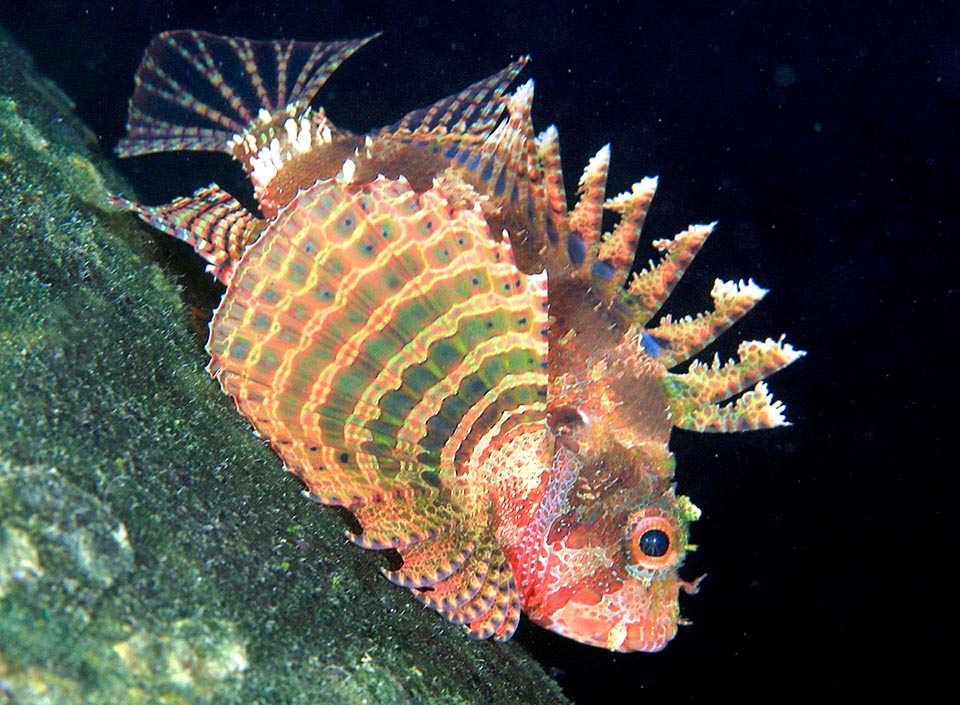 Dendrochirus brachypterus (Cuvier, 1829) belongs to the class of the Actinopterygii, the ray-finned fishes, to the order Scorpaeniformes that, with more than 1300 species, is one of the five most important orders of the bony fishes, and to the family Scorpaenidae, that of the Red scorpionfish (Scorpaena scrofa), delight of the gourmets, and one of the most poisonous extant fishes, like the Devil firefish or the Red lionfish (Pterois volitans) and the even more frightful Stonefish (Synanceia verrucosa).

The name of the genus Dendrochirus comes from the Greek “δένδρον” (Dendron) = tree, wood, from “χειρός“ (Cheiros) = hand, with reference to the open pectorals, its hands, drawing a characteristic cercle of rings evoking the growth ones visible in the section of a tree.

The specific term brachypterus originates, always in Greek, from “βραχύς” (Brachys) = short, and “πτερόν” (Pteron)  = wing, again alluding to its particular fins, similar to wings, but of modest size if compared to its relatives of the genus Pterois where Cuvier, in 1829, had placed this fish. 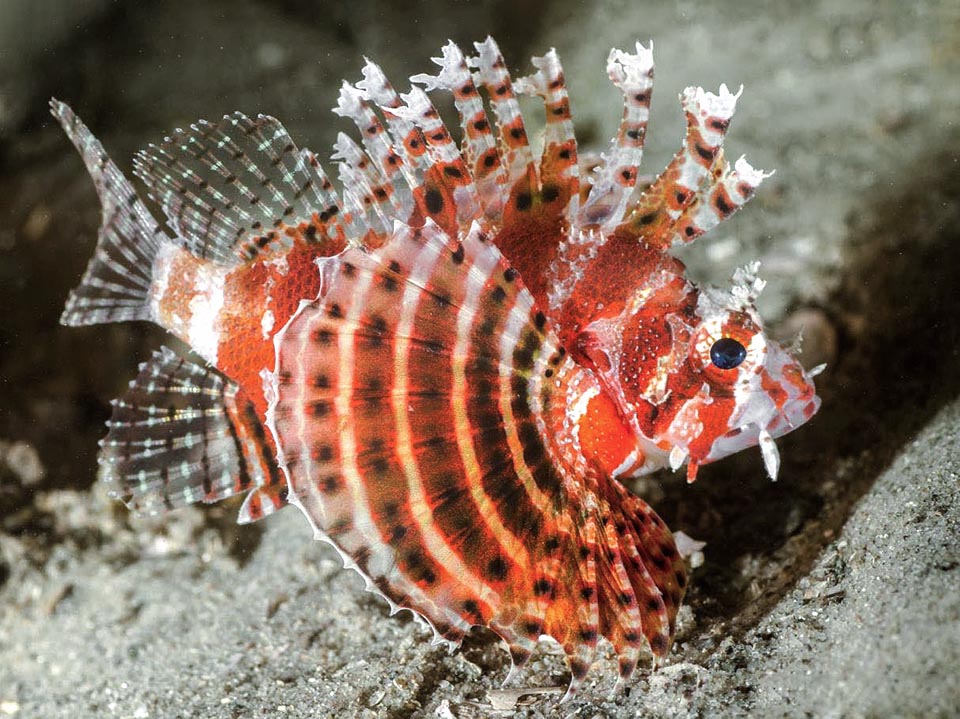 It can be found in 2 m of depth, but goes down up to even 80 m. This red shaded form, is the most common livery. The first 12 rays of the dorsal fin, evidenced by elegant ensigns, can freely orient to all directions to hit intruders injecting, like syringes,the ichthyotoxin, strong fishes poison, luckily thermolabile in case of human accidents © Ian Shaw, Reef Life Survey

The vulgar names change a lot depending on the countries.

In Italy, they talk of Chinese umbrella, comparing the rays of the fins with those of an umbrella; in France, more scientifically, of Ptérois nain”, seen that, size apart, it resembles very much to these fishes; for the Australians and the Indonesians, it is the Dwarf lionfish, that is, a dwarf lionfish (also here, reference is made to the Pterois called in English Lionfish); same is done by Germans, with “Zwerg-Feuerfisch”; but in the States, depending on the sites, it is called “Shortfin lionfish” (a lion fish with short fins), “Shortfin Turkeyfish” (turkey fish with short fins), for the posture of this bird during the nuptial parade, very popular in the USA, so much that Benjamin Franklin wanted to have it at the place of the Eagle as National Symbol, or, more, “Zebra firefish” (zebra-like firefish), and other names easily attributable to the morphology or the colouration of this fish. 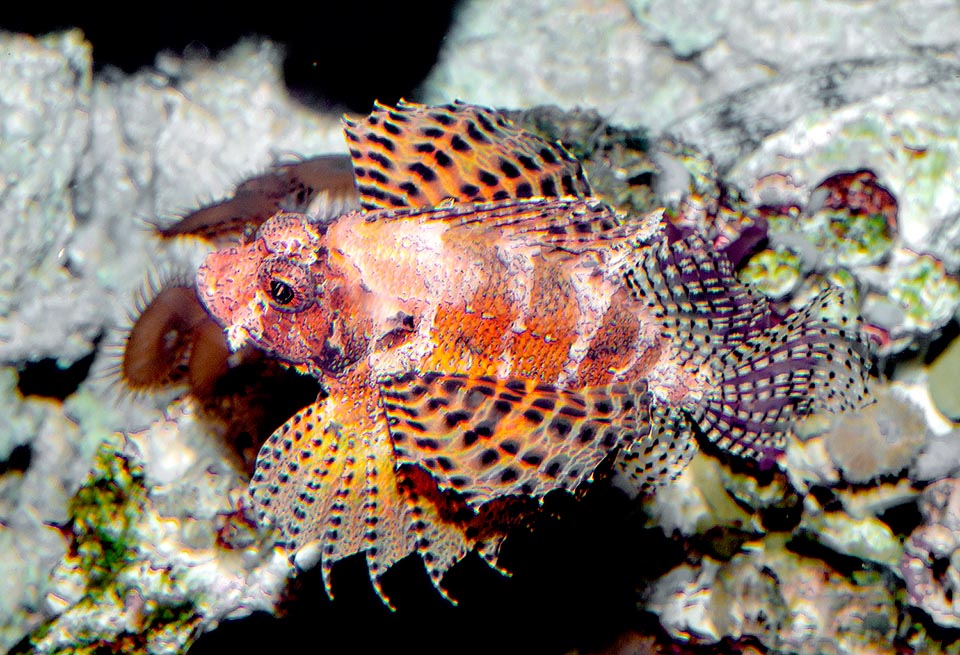 Here the lateral line is well visible and also bands livery on the body, recalling usually the colour of the showy pectorals. While they fold swaying, at times they can give the impression, as here, of two overlapped fins. The elongated and hook shaped first fore rays help the fish to move around corals. It loves the calm waters of the lagoons © Giuseppe Mazza

Dendrochirus brachypterus has a very vast distribution in the tropical Indo-Pacific waters. Indicatively, we find it along the coasts of Mozambique, in Malaysia, in Mayotte Island, the Maldives, India, Andaman Islands, Thailand, Malaysia, Indonesia, Papua New Guinea, Australia, New Caledonia and Lord Howe Island which marks the southern limit of the species. Northwards, after the Philippines and Vietnam, it reaches Japan, whilst eastwards, it goes up to Tonga and Samoa.

It is a nocturnal benthic species. It can be found in 2 m of depth, on the sandy and detrital bottoms, among madrepores and rocks covered by algae, but goes down up to even 80 m of depth. It loves the calm waters of the lagoons, where it perfectly camouflages between sponges and corals, waiting for prey. 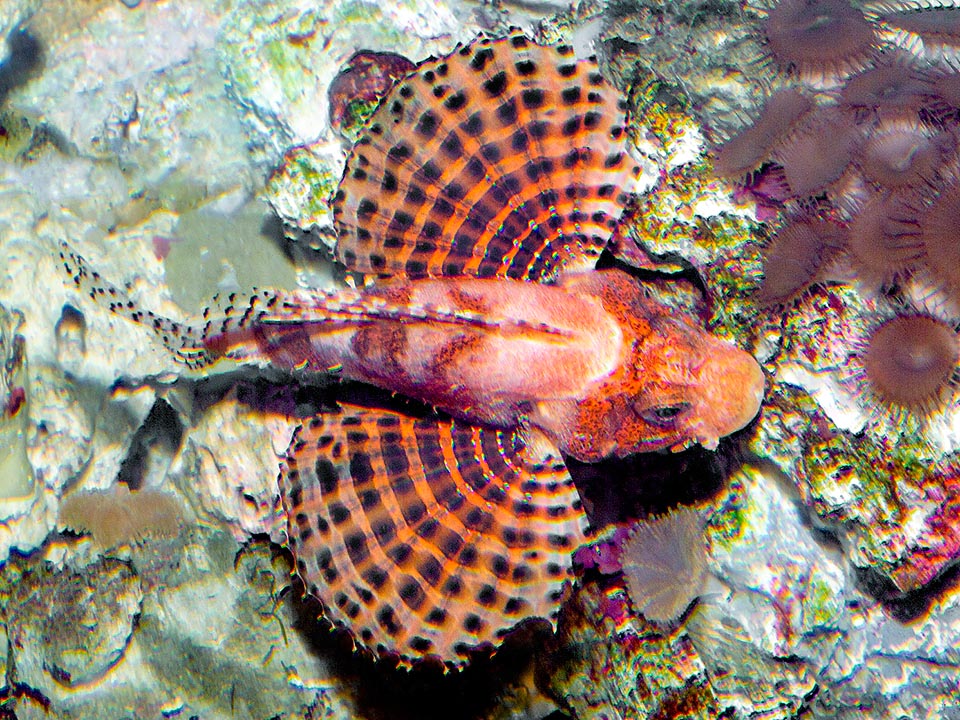 The big movements occur gliding, with open wings. Head and mouth are enormous to swallow in ambush crustaceans and small fishes © Giuseppe Mazza

As seen, it is a mini Pterois as it can be only 17 cm long at most. The head is stocky with mimetic outgrowths and an enormous protractile mouth. The eyes are surely large if compared to the fish, for a perfect night vision.

The lateral line, with 42-45 scales, is well marked, almost in relief. The dorsal fin has a particular structure: it has 13 spiny rays, 9-10 soft ones, and so far nothing strange, but the originality stands in the fact that the first 12 spiny rays are separate from each other and can orient freely themselves in all directions. Moreover, like syringes, they are connected to a venom gland, ready to inject ichthyotoxin, the powerful fish poison, luckily thermolabile. This is well known by the intruders, and for warning them, the small Dendrochirus brachypterus has decorated its multidirectional stingers with colourful ensigns, as if were not sufficient the characteristic pectoral fins to memorize the species. 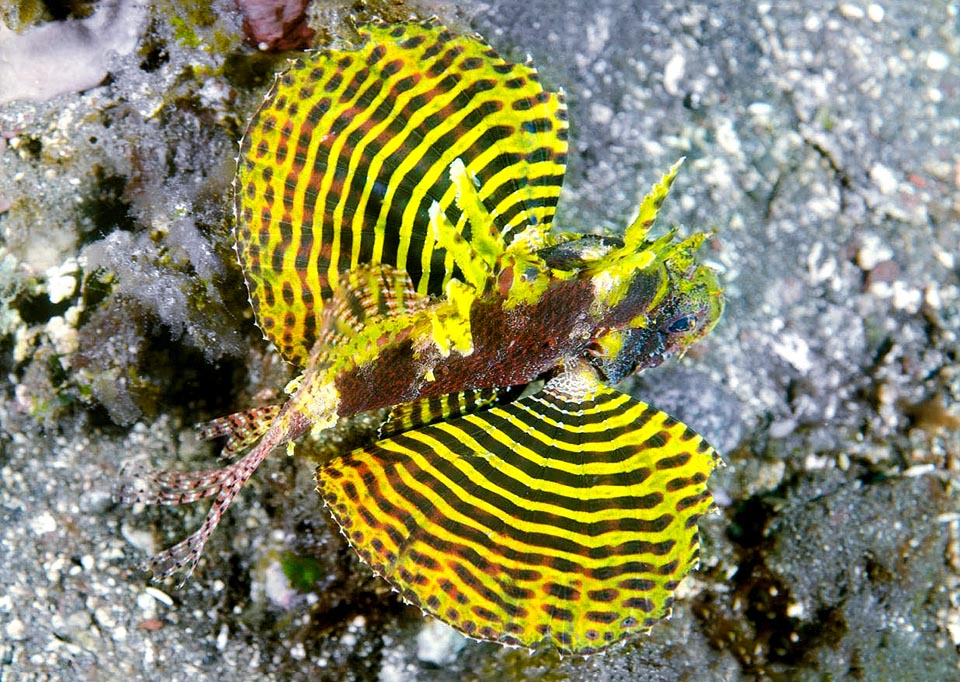 The rarest pattern paid in gold by optimist aquarists hoping in vain to host it in small home pools, is the one with yellow and black bands pectorals evoking with no doubts as cited by the scientific name of Dendrochirus the growth rings visible in a tree trunk section. It is a fish easily prone to diseases to be kept only in large public aquariums © Ian Shaw, Reef Life Survey

These last have 17-18 soft rays with a pattern having concentric circles, of a colour mostly in harmony with the camouflaging bands of the body. It is possible to find an alternation of red and black bands, but also of green and black, blue and black or yellow and black, which is the rarest form, the one which for the aquarists has no price.

It is a fish that likes staying still. It often waves the pectorals like legs in order to facilitate the movements on the bottoms, but it completely opens them at the same time only during the gliding swim when obliged to escape or moving among coral formations. 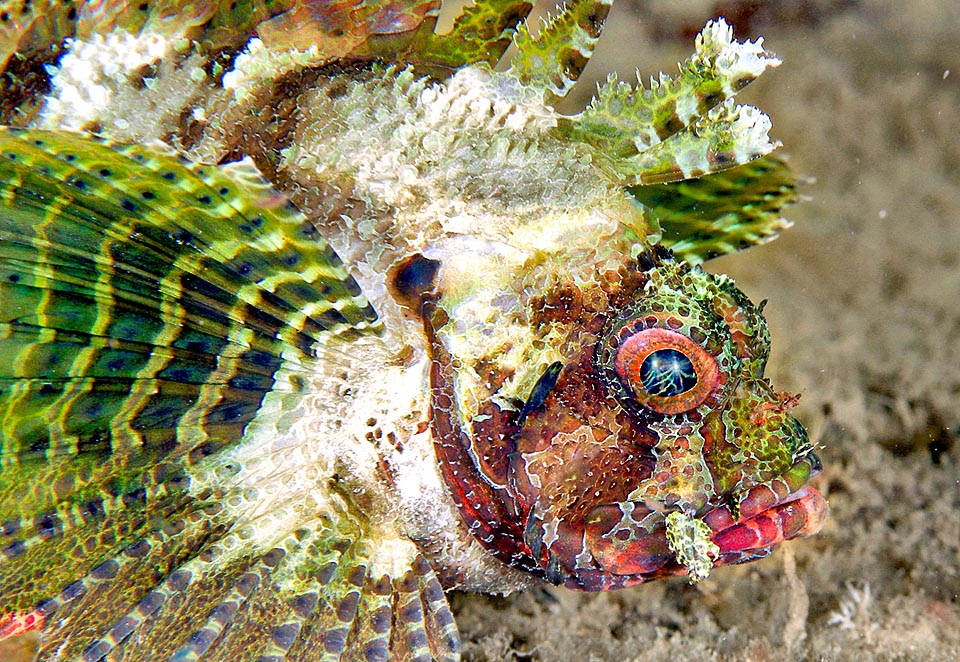 Striking head close-up in green and black livery. Outgrowths and drawings intrigue the ill-fated looking for food who then end whole, without escape, in the fish stomach © Keoki Stender

Dendrochirus brachypterus is a voracious carnivore that hunts, mainly in ambush, in unpredictable places, even hanging upside down in a cave. It swallows whole the small fishes and the crustaceans getting close, intrigued by the outgrowths and the colours, to its large mouth. And they are hesitant it has been seen pushing them against an obstacle with the fins fully open to prevent their escape.

In nature, it lives alone, except during the reproduction time when the females lay jelly-like masses of floating eggs, as occurs with the scorpionfishes. Carried by the currents, they dissolve in less than two days freeing the larvae.

Seeing its small size, the multicoloured livery and the poor will to move, it might be thought that it is a fish ideal for a small domestic aquarium. 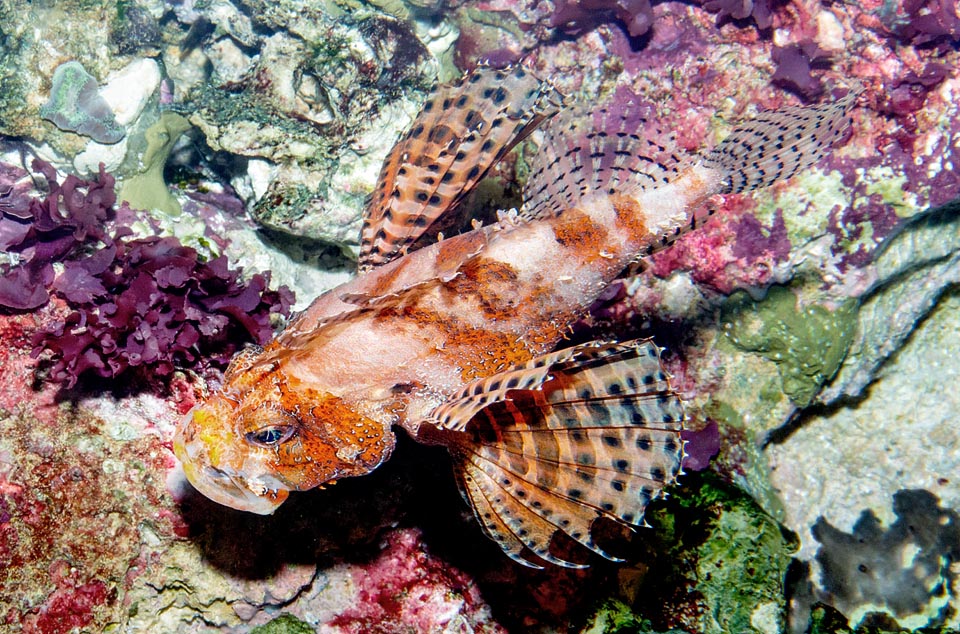 The enormous mouth is protractile, and Dendrochirus brachypterus not exceeding 17 cm, can gulp preys of its same size © Giuseppe Mazza

Actually, it is a fish that hardly accepts dead preys, even if, finally, we can be able to get it appreciating fragments of shrimps, shaken with a stick in front to the muzzle, it pollutes a lot and needs powerful external filtres of big size, not to forget periodical and expensive partial changes of water.

To induce them to eat, some offer them the common and inexpensive live gold fishes that usually are immediately swallowed, but these freshwater fishes and often disease carriers, and the ill-fated Dendrochirus brachypterus are already themselves particularly subject to those present in the aquaria. Moreover, when the PH is less than normal and in the water concentrate phosphate and nitrate, the skin is immediately affected and comes off in shreds.

And all this without forgetting the danger of stings, far from rare, during the careless cleaning of the pool or the attempts to feed it. 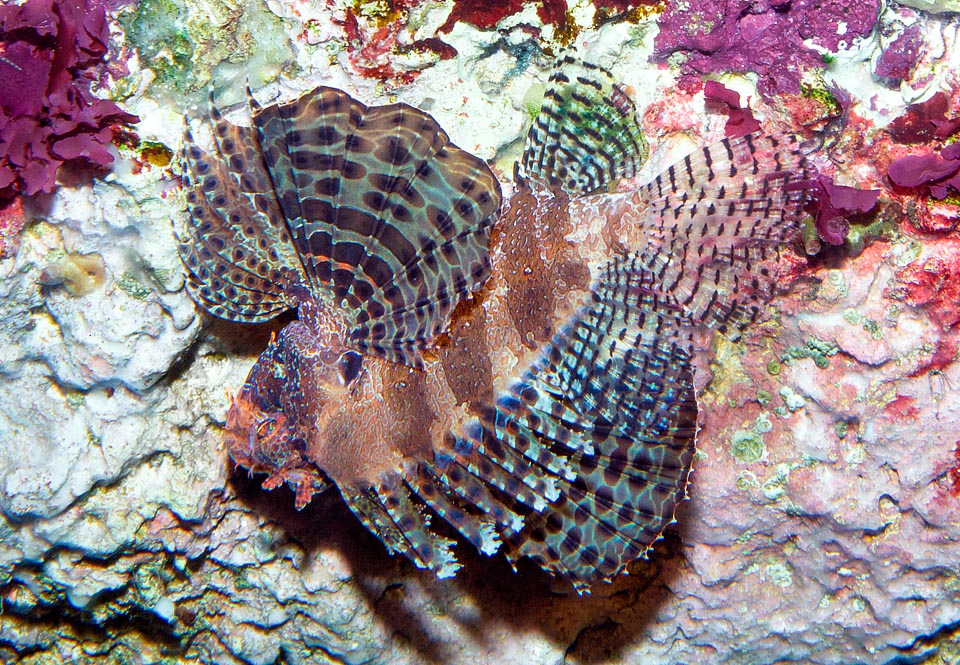 It hunts by night, hidden among corals, at times in incredible postures like this coloured specimen turned upside down on the ceiling of a cave © Giuseppe Mazza

Then, it is better to leave this multi-coloured luxury scorpionfish in the waters of the reefs unless hosting it in well equipped and controlled pools of the large public aquaria.

In nature, the resilience of the species is rather low, with populations that may double in days. Nowadays, in 2020, the vulnerability index is moderate, marking 32 on a scale of 100.