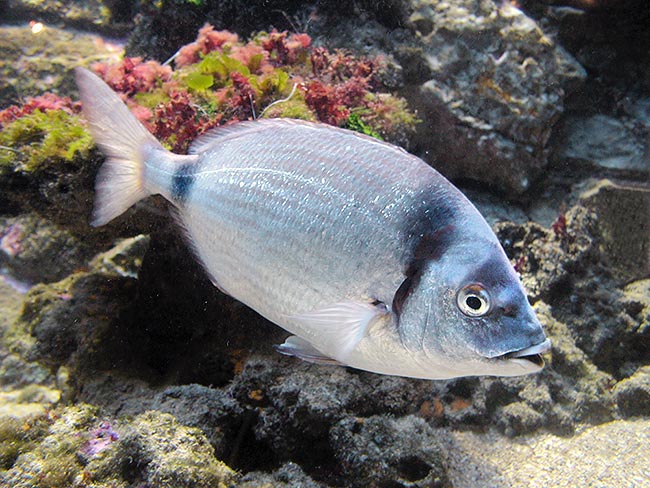 Often present in the public European aquariums, the Common two-banded seabream (Diplodus vulgaris Geoffroy Saint-Hilaire, 1817) belongs to the class of Actinopterygii, the ray-finned fishes, to the order of Perciformes and to the family of Sparidae.

The name of the genus come from the Greek “diplous” = two, and “odous” = tooth, therefore “double tooth”, with reference to the incisors, present on both jaws.

The name of the species comes from the Latin “vulgaris” = common, and, as a matter of fact, it is quite easy to fish.

It is very frequent in the entire Mediterranean basin, and, beyond the Gibraltar Strait, it is found on the Atlantic coast, northwards up to England, and southwards up to South Africa, including the Azores, Madeira, Canary and Cape Verde Islands. After the Cape of Good Hope, it goes northward for a while along the Indian Ocean coasts.

The scenery preferred by the common two-banded seabream is a nice sandy seabed with a rock amidst. It adapts also to the rocky seabeds, but less than its congeners, and in any case it is tied to the sand, where it looks for molluscs and small worms. It does not love the variations in salinity and therefore it is difficult to find in the brackish waters. It can go down up to 150 m of depth, but, usually, it does not exceed the 30 m.

Typically oval and flat, rather tall, has modest size. Even if it may reach the 45 cm, it seldom exceeds the 30 cm and the most commonly fished specimens measure 20-25 cm with a weight of 500-600 kg.

At once identified by two black bands. Blue and brown appear during the reproductive time © Giuseppe Mazza

The mouth is small, with 8 incisors per jaw followed by two rows of molars.

Thin golden stripes, but nothing to do with the wide ones of the Saupe (Sarpa salpa), are visible on the sides, especially in the juveniles. During the reproductive period, the head assumes a typical bluish colouration and, between the eyes, on the front, appears a brown band.

It reproduces in autumn, with floating eggs, and also the larval forms are pelagic. Only when they reach the 15-20 mm the approach, in schools, the coasts, often together with the youngs of the Sharpsnout seabream (Diplodus puntazzo ).

By the 17 cm of length, the common two-banded seabreams are capable to reproduce, and after a first period where their sex is uncertain, they finally become males or females. The vulnerability index of this species is of 48 over 100.