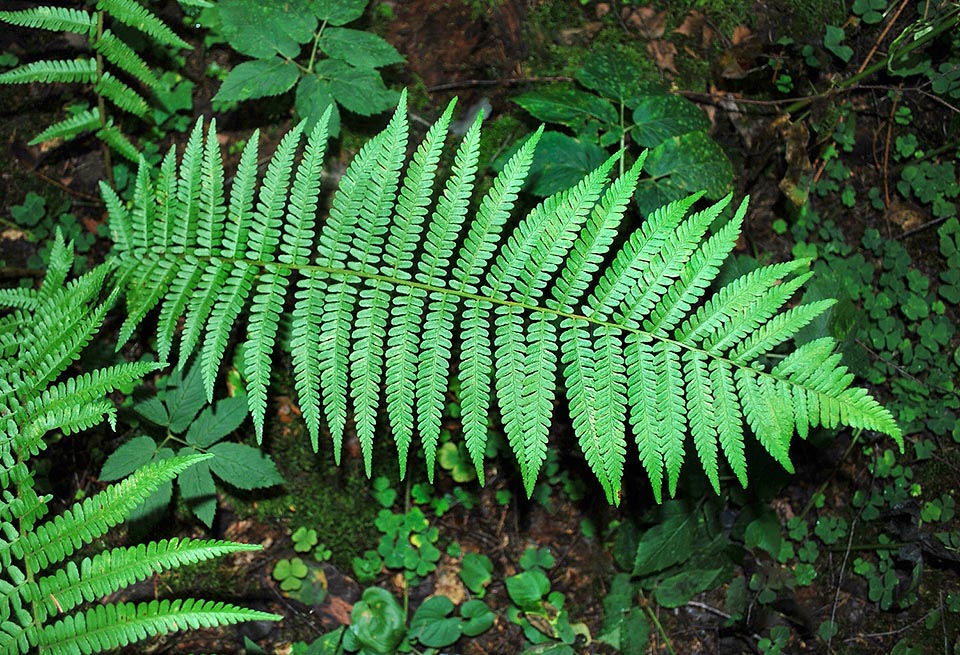 Frequent in the temperate forests of Europe, the Male Fern has large leaves that can be more than 1 meter long © José Campos

The Male fern (Dryopteris filix-mas (L.) Schott, 1834) is a pteridophyte with large, fasciculated leaves, quite frequent in the temperate and boreal forests of Europe, belonging to the family Dryopteridaceae, the largest family of ferns, with 26 genera and almost 2100 species.

According to the recent classification of the Pteridophyte Phylogeny Group (2016), this family belongs to the order Polypodiales, one of the 11 orders within the class Polypodiopsida.

The genus Dryopteris Adans., with a subcosmopolitan distribution, has more than 300 species and about 80 hybrids according to the Checklist of Ferns and Lycophytes of the World, by Hassler & Schmitt (2020). 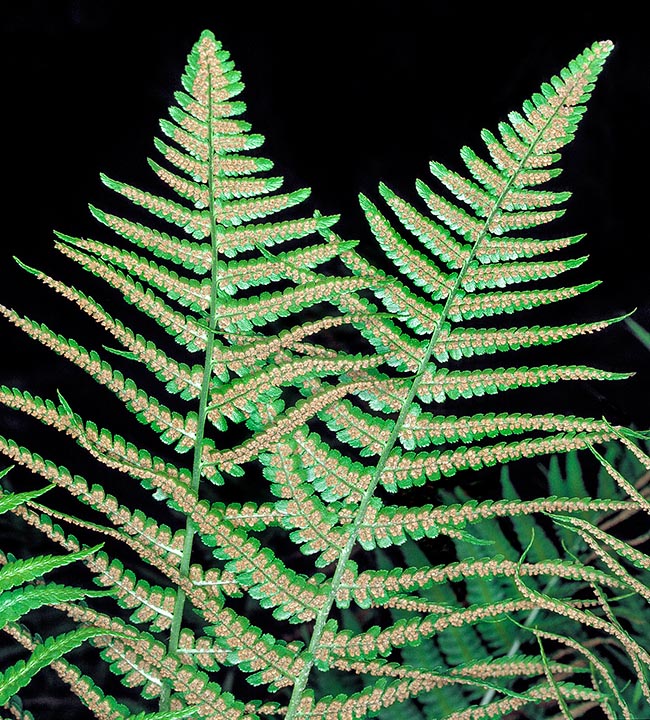 The leaves are bipinnate, bearing a large number of sori on their underside © Giuseppe Mazza

They can be found mainly in humid forests of montane regions. The greatest diversity within the genus is found in Southeast Asia, mostly in the subtropical regions of China, with 175 species recognized.

On the other continents, this number is much more modest, in Europe its diversity increases from north to south. Most of these species are endemic (some of them with extremely restricted ranges).

The species of this genus have generally large, monomorphic (that is, of a single type) leaves, densely fasciculated, forming a crown that emerges from the apex of an ascending or erect rhizomatous stem, covered with laminar trichomes (scales) and by the base of dead leaves.

The petioles, and often also the rachises, are scaly, with 3 or more vascular bundles arranged in an arc or ring.

The blade is 2-4 times pinnate (only in a few species is 1-pinnate, with undivided pinnae), herbaceous or almost leathery, lanceolate to ovate, with generally symmetrical segments, with margin entire, crenate or serrated, sometimes spinulose.

The young leaves emerge with the rachis and pinnae spirally wound, resembling the scroll of a violin. This arrangement is called circinate vernation (from the Latin “circinatus”, rounded) and is typical of most ferns of the class Polypodiopsida.

The sporangia are grouped into circular sori on the underside of the blade, arranged in two rows, one on each side of the segment midrib, and covered by a reniform membrane (indusium), persistent or caducous, which in Polystichum Roth, a related genus with numerous species, is peltate (shield-shaped). 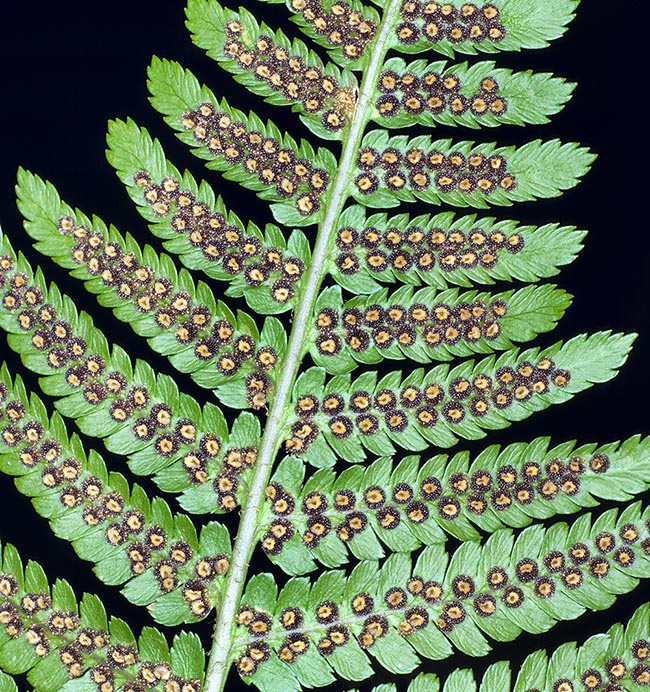 Species in this genus have large sori covered by a membrane called indusium, kidney-shaped © Giuseppe Mazza

In the class Polypodiopsida, sporangia are called leptosporangia, a tiny type of sporangium that develops from a single epidermal cell, consisting of a pedunculated capsule, shaped like a biconvex lens and with a wall made up of a single cell layer.

The sporangium capsule presents a dehiscence ring that consists of a line of cells with thickened walls except the external one that, when drying, contracts and breaks the capsule wall, catapulting the spores outwards.

These are monolete (with an opening line along the spore) and ellipsoidal, with the surface frequently ornamented.

The genus name Dryopteris comes from the Greek terms “drŷs” = oak, and “pterís” = fern, name given by Dioscorides to a fern that grows on oaks, and published by the great French naturalist Michel Adanson (1727-1806) in his work Familles des Plantes (1763). The specific term filix-mas, created by Linnaeus, comes from the latin “filix” = fern, and “mas” = male, which is the common name given to this species and which refers to its robust leaves, in contrast with the most delicate leaves of the Female fern, Athyrium filix-femina (L.) Roth (these two species had originally been assigned to the genus Polypodium by Linnaeus).

Dryopteris filix-mas is the type species of this genus. It is distributed in the temperate regions of the Northern Hemisphere: Europe, Northwest Africa, Macaronesia (that is, the archipelagos of the North Atlantic Ocean located off the African coast), Central Asia, the Himalayas, Russian Far East, North America up to Mexico and southern Greenland.

It grows in dense and humid forests, both broad-leaved and coniferous, in more open forests on stony ground, in ravines, crevices and talus slopes, up to 3000 m of altitude. Introduced in Argentina, Chile and New Zealand. It is considered an invasive species in this last country. 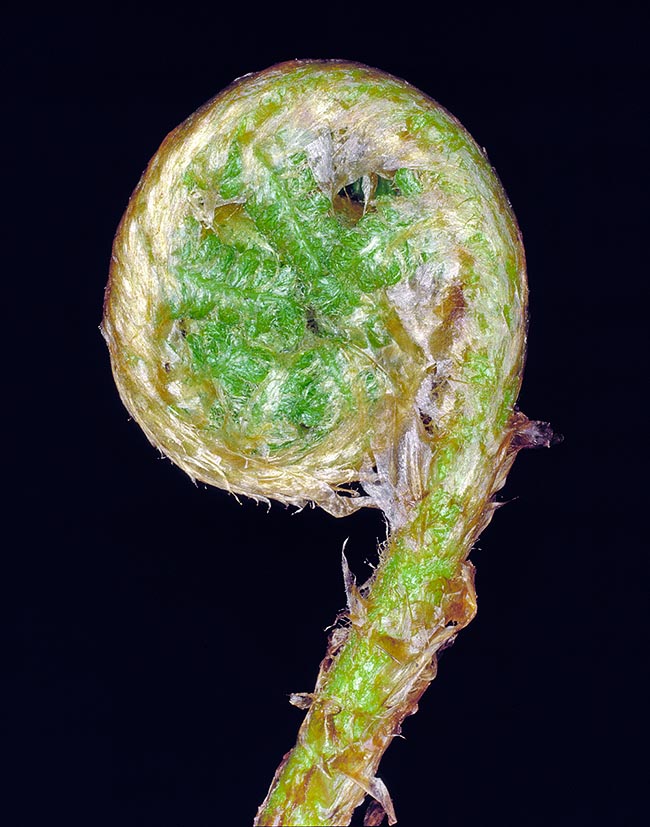 A young leaf developing and covered with scales, rolled up like the scroll of a violin or a bishop´s staff © G. Mazza

It is a hemycriptophyte with a rosette of ovate-lanceolate leaves up to 120 (150) cm long, erect or arched, which do not persist in winter, with 2-pinnate blade (the second order segments are called pinnules) of green or light green color, without glands.

The pinnae are lanceolate, with pinnules with toothed margin and whose sides curve slightly until converging at the apex.

The pale brown scales are of two types, larger ones lanceolate and smaller ones hairlike, and densely cover the base of the petiole, more scarce in the rachis.

The sori are covered by indusia with flattened margins on the segment surface, shrivelling and rising at maturity with the appearance of a Cantharellus cibarius.

The spores, which represent the beginning of the haploid phase (with a single set of chromosomes) of the fern life cycle, are about 40 microns long and mature in mid-summer.

After fertilization, the diploid zygote will give rise to a seedling, with a root, a dichotomously lobed leaf, and a foot that connects it to the gametophyte. As the seedling develops, the prothallus dies, the primary root is replaced by adventitious roots, and the first pinnate leaves appear. This plant, which is what we normally see in nature, is the sporophyte, that is, it produces spores, thus closing the cycle.

In Europe, there are other species similar to Dryopteris filix-mas that show 2-pinnate blades, such as Dryopteris affinis (Lowe) Fraser-Jenk., which differs by its dark green leaves, persistent in winter, with petiole and rachis densely scaly, pinnules with straight lateral margins, entire or with rectangular lobes, and indusium with margins well tucked under, or Dryopteris submontana (Fraser-Jenk. & Jermy) Fraser-Jenk., with glandular blades. 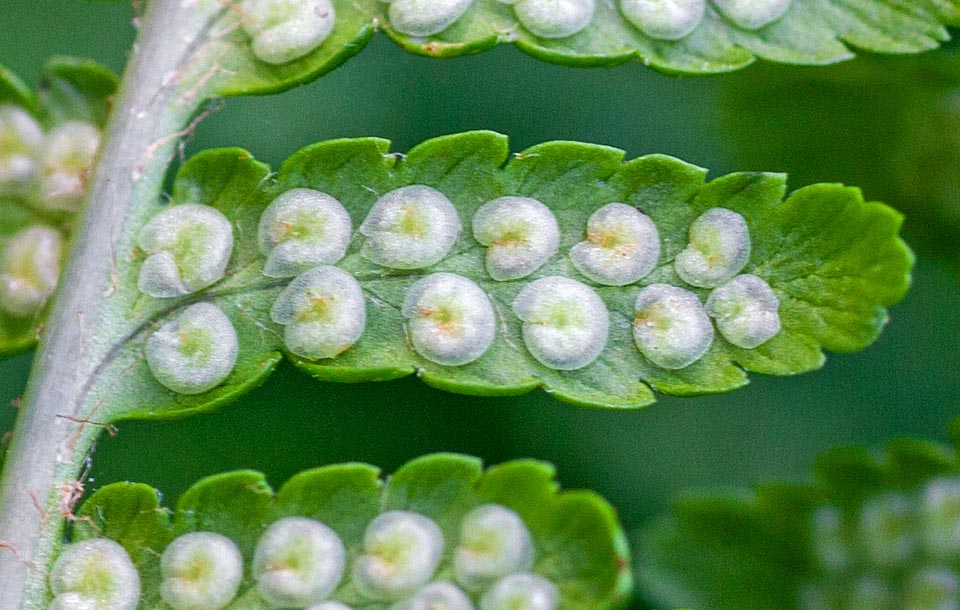 The sori are arranged in two ordered rows on either side of the pinnules midrib. Before they ripen, the indusium, later caducous, fully covers the developing sporangia © José Campos

The genus Dryopteris, among others, has served as a model for the study of speciation mechanisms, as a result of interspecific hybridizations combined with polyploidy. Polyploidy is the condition of organisms having more than two paired (homologous) sets of chromosomes. This speciation mechanism represents a type of reticulated evolution (as opposed to Darwin’s “tree-like” evolution) than in ferns in particular is quite frequent. Pioneer works in 1950 demonstrated the presence of allopolyploidy in various groups of ferns. Allopolyploids arise by hybridization between two phylogenetically related species and subsequent genome duplication, which restores pairing of homologous chromosomes during meiosis. 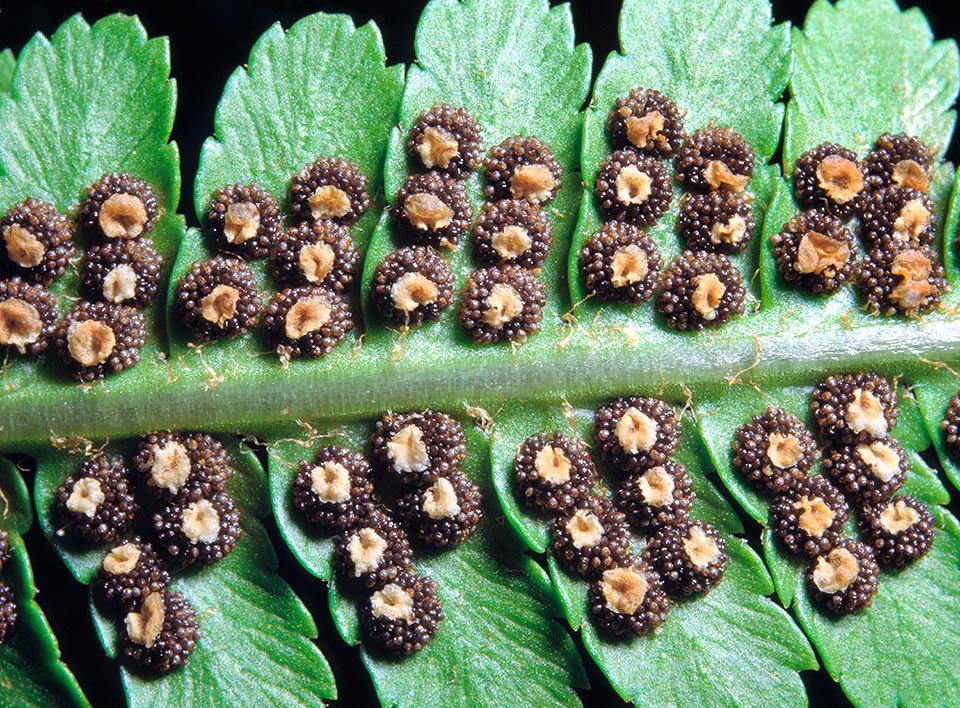 Mature sori, with the indusium wrinkled and raised like the fungus Cantharellus cibarius. They are almost ready to disperse the spores © Giuseppe Mazza

This generates fertile individuals, that is, they can reproduce sexually, and at the same time reproductively isolated from their parents.

In the family Dryopteridaceae, the basic chromosome number (n), that is, in the gametes, is 41. Dryopteris filix-mas, with 2n = 164, would be an allotetraploid originated by hybridization between two diploid (2n = 82) species such as possibly Dryopteris oreades Fomin and Dryopteris caucasica (A. Braun) Fraser-Jenk. & Corley.

There are some cultivars, such as ‘Cristata’, with crested pinnae, ‘Barnesii’, with narrow and upright leaves, or ‘Linearis’, with very narrow pinnules. For its cultivation, soils rich in organic matter and humid are required, in a shady place. It is multiplied by division of the rhizome or by spores. 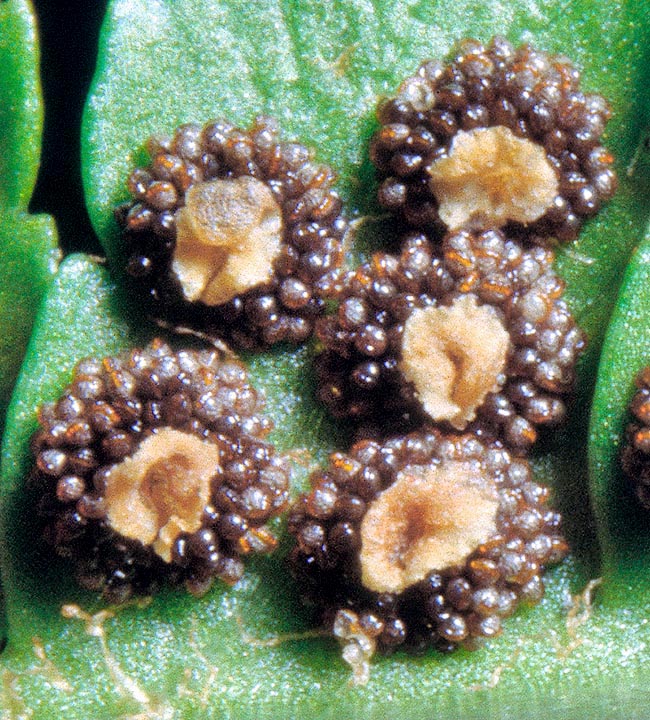 Very enlarged image of sori. The brown sporangia with the orange dehiscence ring are appreciated. When this ring dries, it contracts and abruptly breaks the sporangium capsule, catapulting around the spores © Giuseppe Mazza

The male fern rhizome has been used since ancient times for its anthelmintic properties, already described by Theophrastus and Dioscorides.

It is harvested from July to September and, after removing the dark parts, fibers and palea, it is carefully dried and reduced to a yelowish powder, which must be stored in stoppered bottles.

It has also been used in the treatment of internal hemorrhage, mumps, and febrile illnesses.

However, it must be used with great care due to its toxicity and always under medical supervisión. Despite its low absorption, in the presence of fats or oils this absorption increases and can cause poisoning, characterized by vomiting, diarrhea, headaches, seizures and blindness.

Cattle have been found blind or in a comatose state after grazing on this fern to the base. As a curiosity, in Norway the farmers collected in the past the rhizomes of this species and of Matteuccia struthiopteris (L.) Tod., which were boiled together with seaweed and twigs and bark of various trees and used as a supplementary source forage for livestock, particularly in coastal areas.