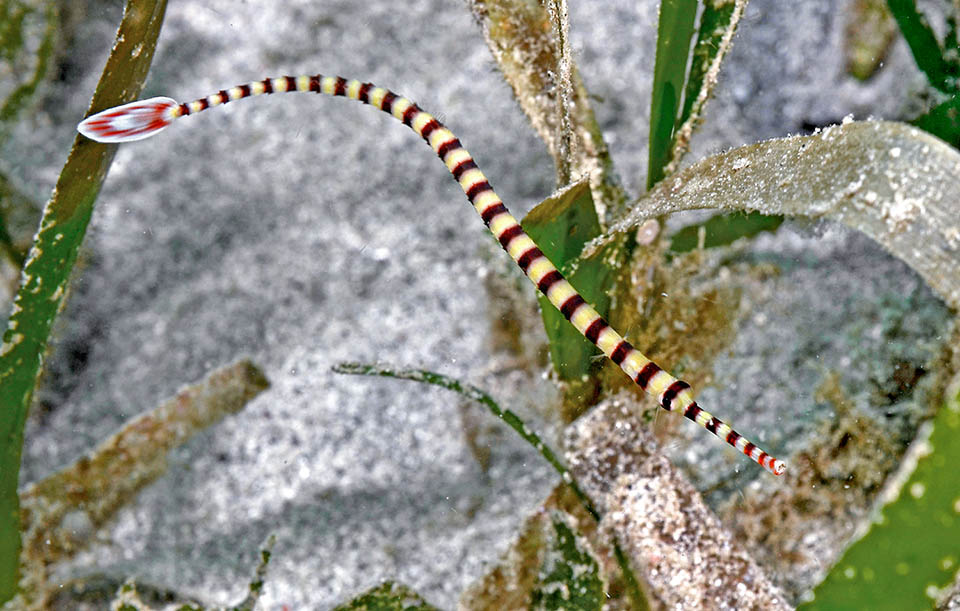 Dunckerocampus dactyliophorus (Bleeker, 1853), commonly known as Ringed pipefish, belongs to the class of the Actinopterygii, the ray-finned fishes, and to the family of the Syngnathidae, the same as the seahorses, that counts 58 genera and 307 species.

It is inserted in the imaginative and varied order of the Syngnathiformes that groups 5 families of fishes with elongated and tube-shaped snout, but the adults of the genus Bulbonaricus who lose it, like Bulbonaricus brauni, during its passage from the larval pelagic stage to the demersal adult. 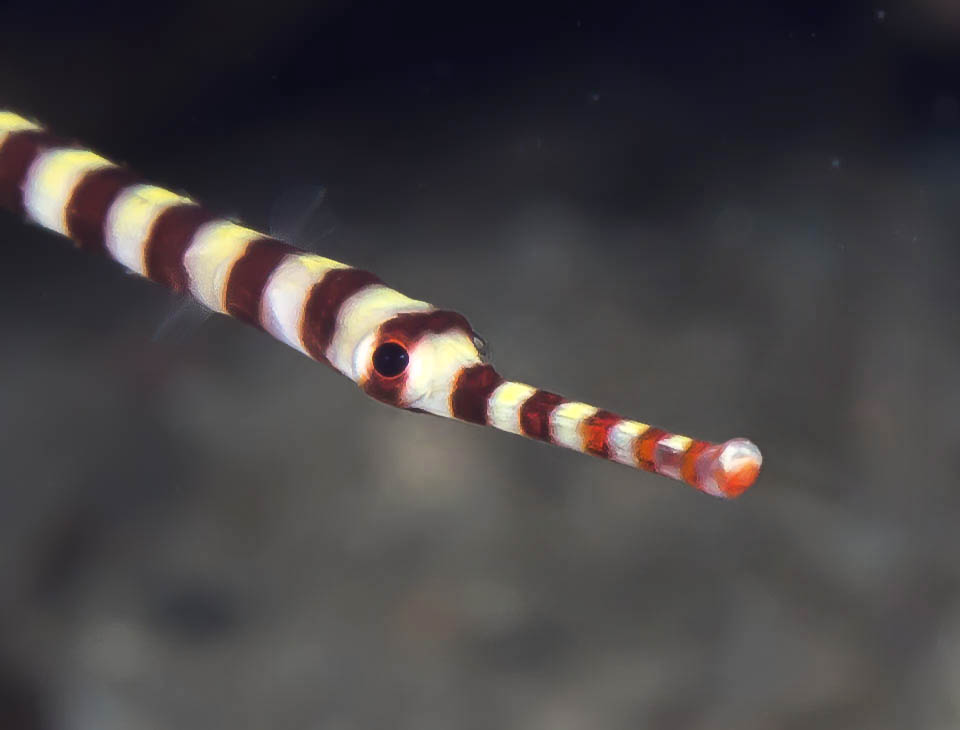 It’s a fish with a rectangular section, without scales, protected by big plates. The mouth is tiny with the upper jaw cream white like the body and the lower one red © Rickard Zerpe

They are animals, to give an idea, like the Chinese trumpetfish (Aulostomus chinensis), belonging to the family Aulostomidae, the Razorfish (Aeoliscus strigatus) of the Centriscidae, the Ornate ghost pipefish (Solenostomus paradoxus) of the Solenostomidae and the cornetfishes inserted in the Fistulariidae.

The genus Dunckerocampus honours the memory of the ichthyologist Georg Duncker (1870-1953) of the Zoological Museum of Hamburg, united with “κάμπος” (kámpos), sea monster in old Greek, with reference to Campe, mythological guard of the Tartarus. The specific term dactyliophorus originates, always in Greek, from “δακτύλιος” (daktylios), ring and “φέρω” (phero), to bring, due to the numerous dark rings that this fish has on the body. 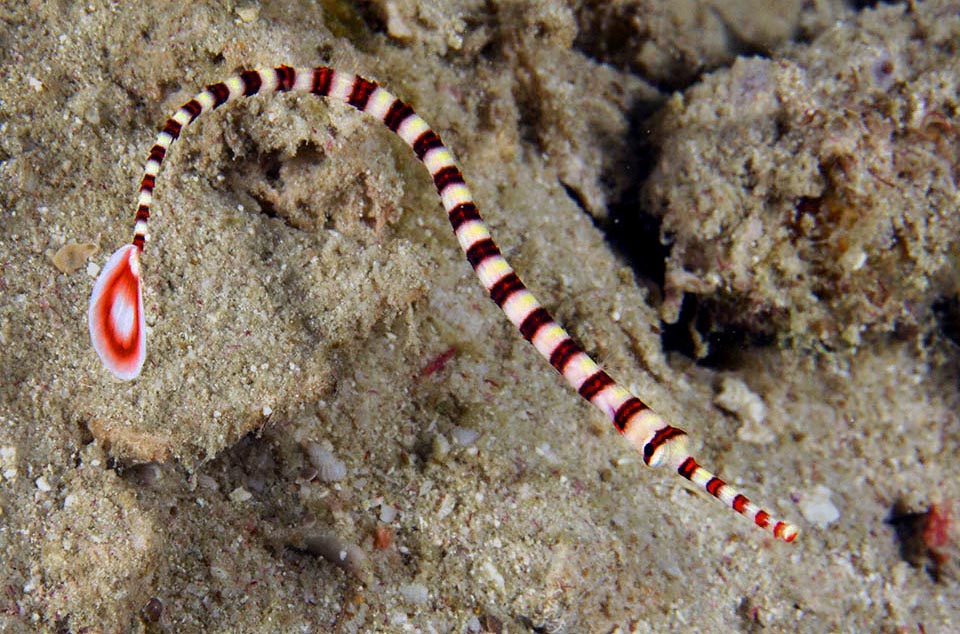 It distinguishes from morphologically similar species mainly for the typical drop-shaped caudal fin, red with white margin and a white circle in the centre © Paddy Ryan

There are several species morphologically similar. Nowadays, in 2022, they talk, for instance, of a Dunckerocampus naia, with a range partially overlapped but with the red caudal fin edged in white and a small white spot at the base. 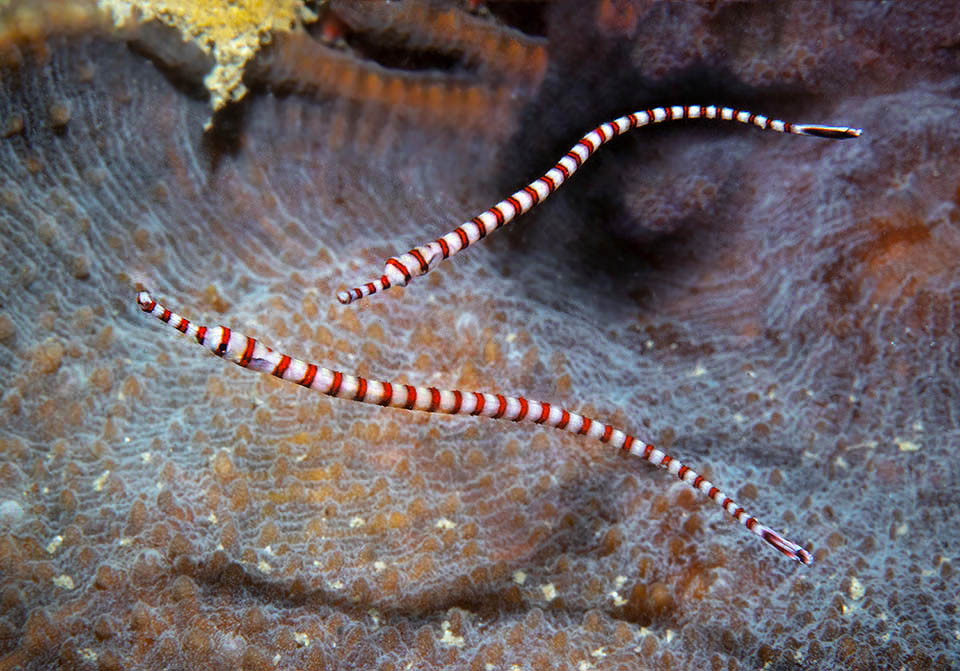 Known as Ringed pipefish, it reaches 19 cm of length with 20-32 dark rings, often reddish, that mask the big eye and continue on the snout © Rob Lee

Then there is Dunckerocampus chapmani  present only in New Caledonia with orange caudal, yellow in the centre, with edge black before and then white; Dunckerocampus pessuliferus, present in the Philippines and in Indonesia, with red caudal having an orange spot at the centre and the upper part white; Dunckerocampus multiannulatus present in the Red Sea and in the Indian Ocean with caudal fin analogous to the previous species but, as stated by the specific name, with much more numerous and thin rings.

According to some, Dunckerocampus dactyliophorus should circulate also in the Red Sea, whilst others affirm that the specimens observed belong to Dunckerocampus boylei, a species frequent also in various locations of the Indian Ocean. The morphological difference should concern mainly the absence of the white spot at the center of the caudal fin. 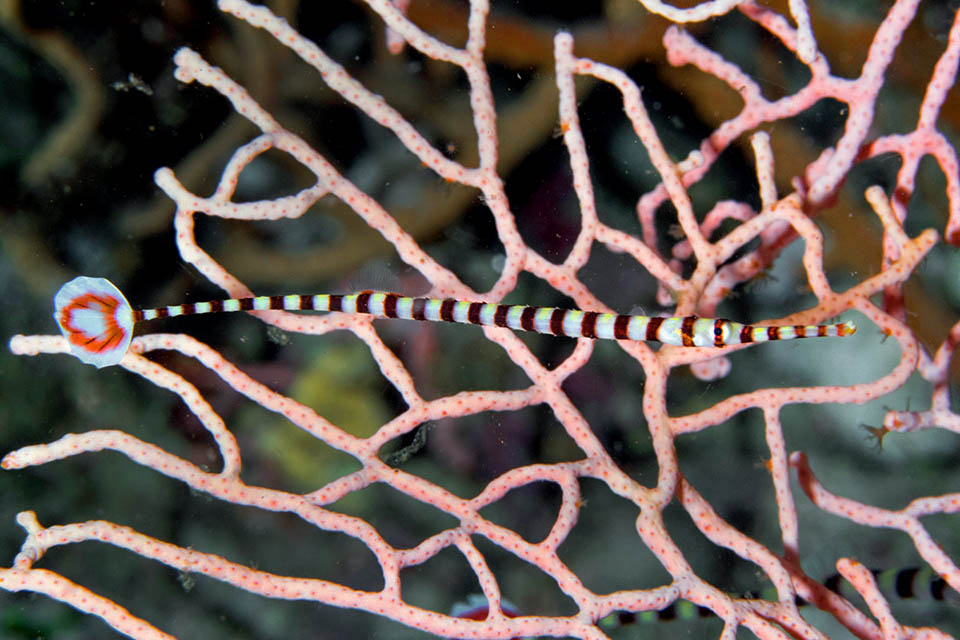 Lives in calm waters, between 5 and 56 m of depth, quite often sheltering from the predators in the safe den of a moray that it cleans in return from the skin parasites © Mark Rosenstein

Dunckerocampus dactyliophorus lives between the 5 and the 56 m of depth in the calm lagoons waters but also on the outer side of the reefs if there are welcoming ravines or small grottoes it often shares with the morays. Together with small shrimps, they in fact do clean them from the skin parasites, getting in return an effective protection against the predators.

The juveniles mainly grow in the submerged prairies, but also in rock pools. 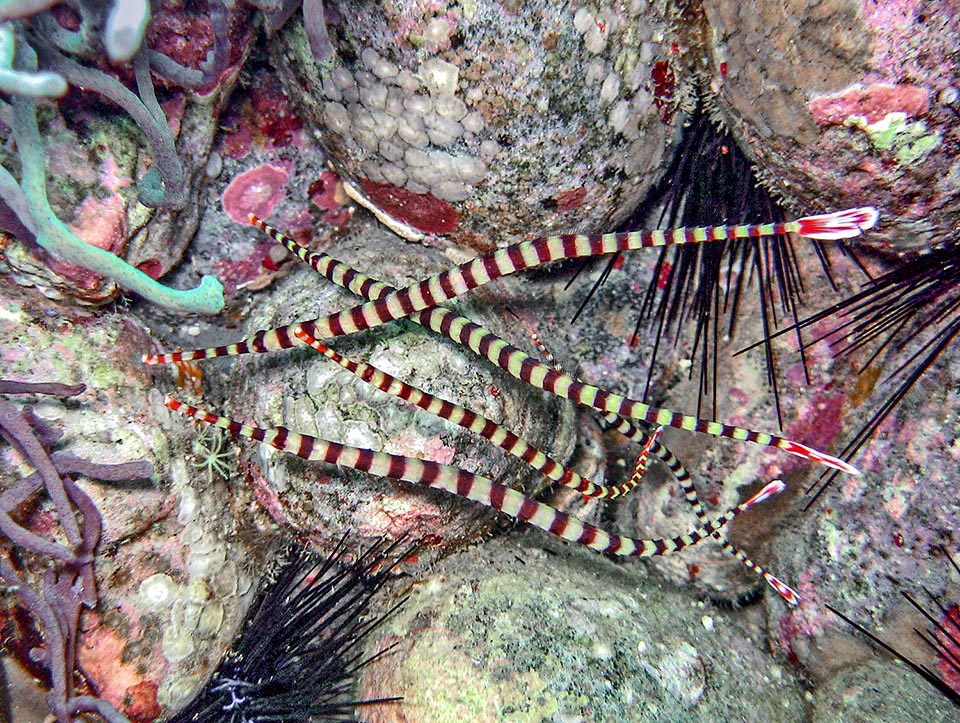 Its diet is based primarily on the copepods, and where these abound, even if it usually lives alone or in couple, some small aggregations may take form © Iain Frase

The Ringed pipefish reaches a length of 19 cm. The body, with a rectangular section, is covered by large plates that replace the scales. On the cream white body, we count 20-32 dark rings, often reddish, that mask the big eye and continue on the long snout. Every ring has some spiny outgrowths that eventually form, one after the other, some small longitudinal crests.

There is no sexual dimorphism. The mouth is small with white upper jaw and red the lower one. 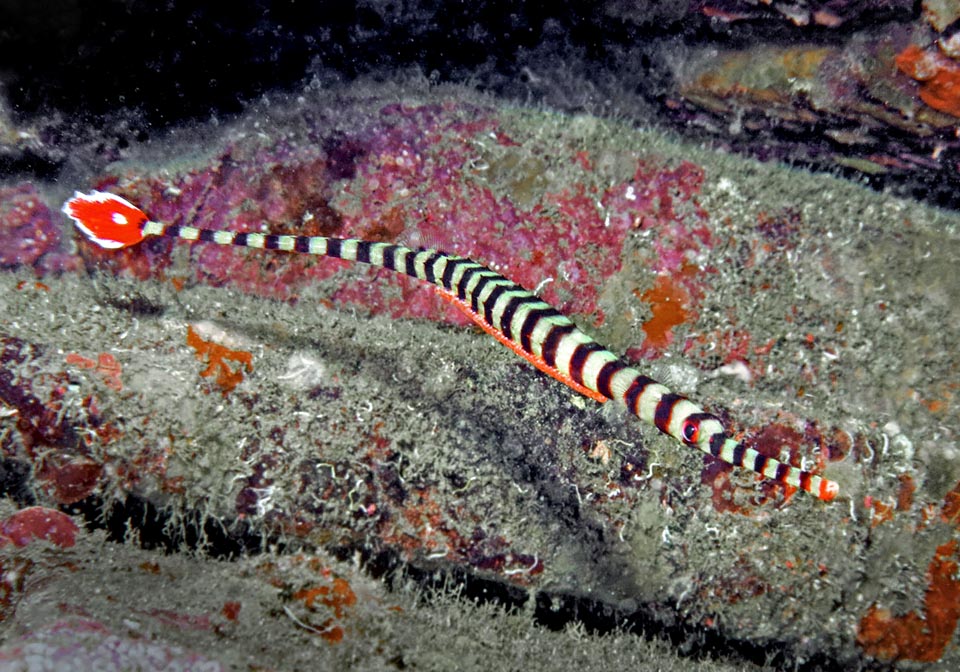 Males protect the fecundated orange red eggs until the hatching, in a long ventral pouch that can contain even 200 of them © Pauline Walsh Jacobson

Dunckerocampus dactyliophorus lives mainly in couples, but in protected sites, rich in plankton, it is not rare to find it in small schools. 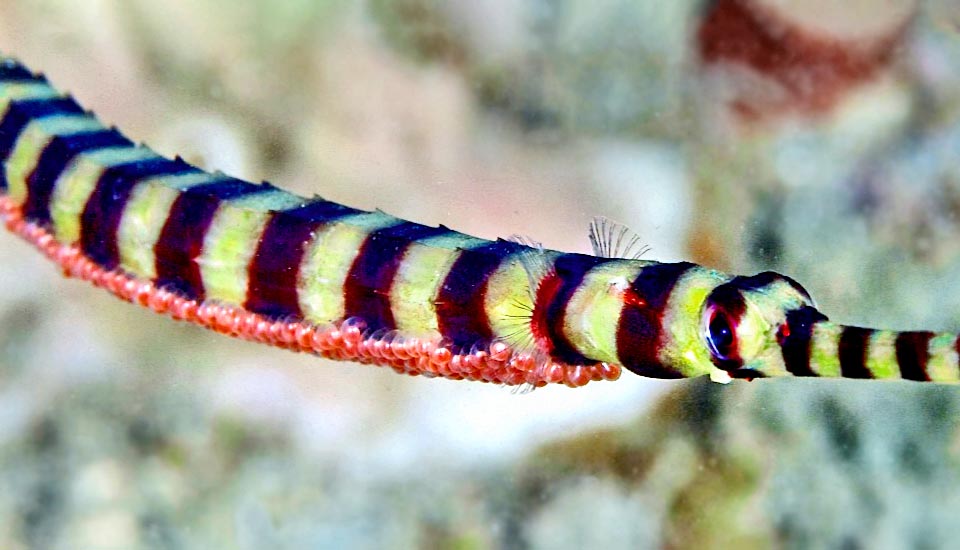 They show up partially inserted in the skin, rich in blood capillaries for oxygenating the larvae. Apart from this detail, we do not note an evident sexual dimorphism © Allison & Carlos Estape

It mainly eats copepods and has been reproduced in captivity, where it is usually fed with larvae of Artemia salina.

The eggs, reddish, are kept until hatching in a long ventral band of the male under the tail. It may contain even 200 of them, partially inserted in the skin, rich in blood capillaries that oxygenate the larvae. After hatching, the newborns, almost transparent, carry on a pelagic life, and only when they reach 3 cm of length and move towards the bottoms, appears the mimetic pigmentation.

Theoretically the Ringed pipefish can be kept in captivity even in pools of modest size, provided with small grottoes where to shelter like in nature when they feel the need; practically an aquarium for invertebrates with few compatible fishes. 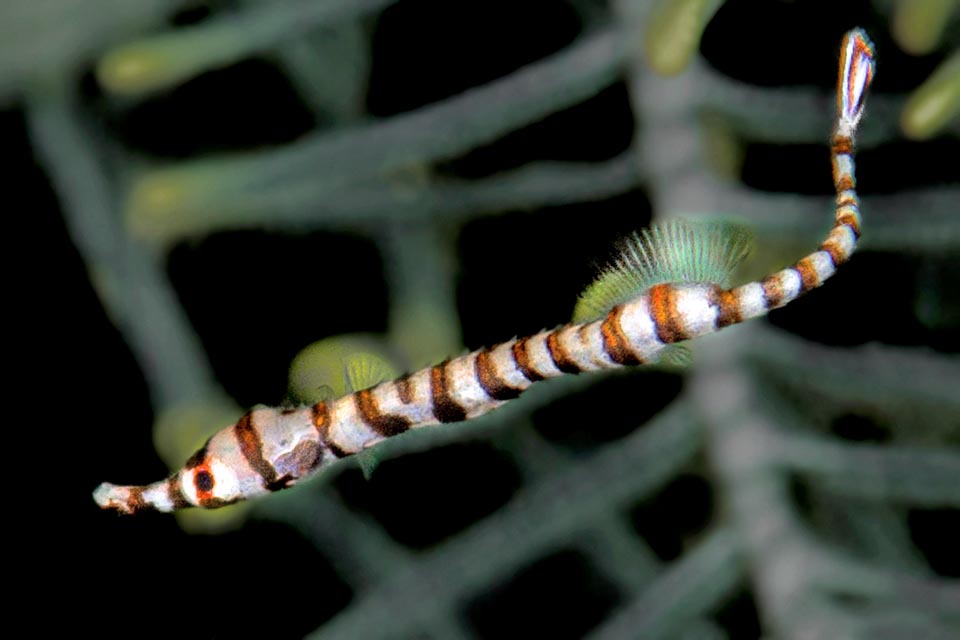 A juvenile. Newborns are transparent and carry on a pelagic life. Only when 3 cm long, when they reach the bottoms, the typical mimetic pigmentation does appear © Karen Honeycutt

However, it is to be kept in mind that the parametres of the water are to be continuously controlled and that feeding with live prey is surely not the simplest.

Resilience of the species is good, with a possible doubling of the populations in less than 15 months, and the vulnerability index, decidedly low, marks presently only 15 on a scale of 100.