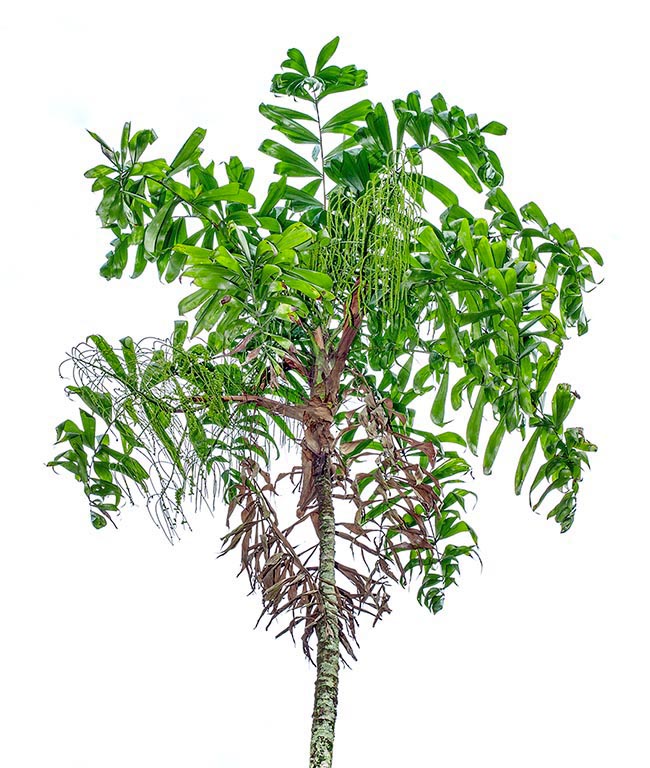 Dypsis pinnatifrons is endemic to Madagascar. The erect and thin stem may reach the 12 m © Giuseppe Mazza

Dypsis pinnatifrons Mart. is endemic to eastern Madagascar, where it is widely diffused in the undergrowth of the central and mountain highlands, up to 1000 m of altitude.

The etymology of the genus  Dypsis  is unknown. The name of the species pinnatifrons comes from the Latin epithets “pinnatus”, pinnate and from “frons, frondis”, frond, with reference to the shape of the leaves.

Dypsis pinnatifrons is a monoecious and solitary-stemmed species with erect and thin stem, turning brown with the age, 2,5-12 m tall with a 4,5-15 cm diametre. The stem is marked by clear rings corresponding to the fallen leaves, spaced 2-8 cm, closer under the foliar crown.

The crown is formed by 8-16 leaves, pinnate and arcuate, up to 2 m long but often smaller, borne by up to 7 cm long petioles.

The shape of the leaves is very particular. The dark green pinnulae, 20 to 45 per each side of the rachis, are broad and short and have the margins and the tips strongly folded inwards. They are united at the base in groups of 3-7, spaced and fan-like arranged on the rachis, thus, to confer the leaf a feathery look. The new emerging leaves are red or bright pink and become green after a few days. The petiole ends in a sheath wrapping the stem, whitish green with red or pink hues, 25-48 cm long and swollen at the base.

The inflorescence is interfoliar, shorter than the leaves, and emerges under the sheath. It is ramified in 3 or 4 orders and displays up to 200 thin drooping rachillae of yellowish green colour, bearing small cream coloured flowers merged in triads formed by one female and two male flowers. The fruits are small, ovoid, 14 mm long and 6,5 mm broad, brown when ripe. Dypsis pinnatifrons is very similar, when adult, to the congener Dypsis nodifera from which differs for the structure of the male flower that presents only 3 stamens instead of 6 and for the endosperm, homogenous rather than ruminated.

It reproduces by seed, to be kept in water for some days, and then interred in a humid and well drained compost, maintained at the temperature of 26-28 °C. It germinates in 1 or 2 months and the first leaflet is bifid. 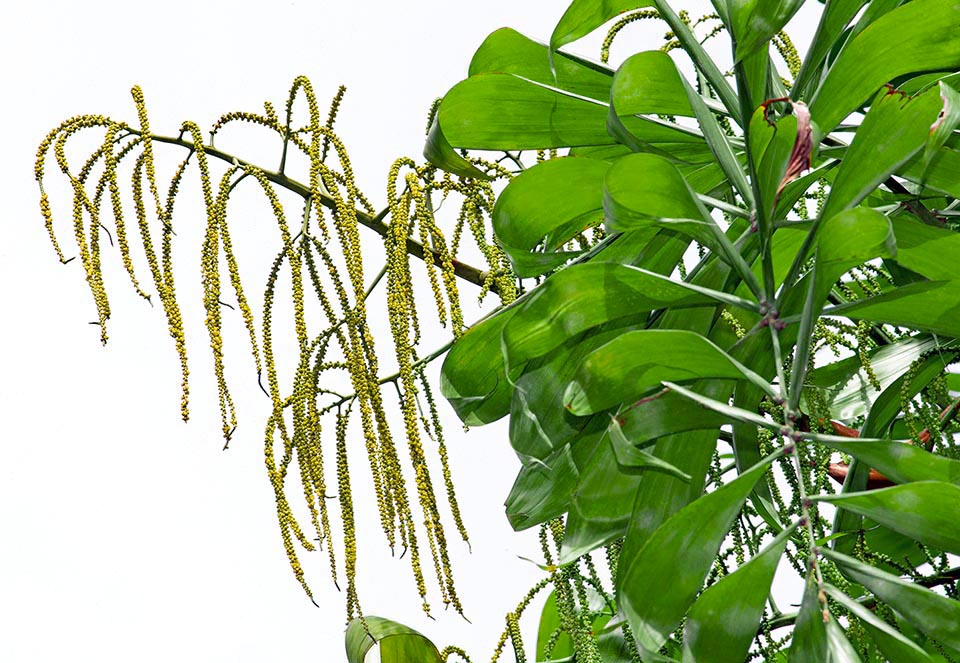 Inflorescence close-up. The wide and short pinnulae of the leaves have margins and tip strongly inwards folded © Giuseppe Mazza

Dypsis pinnatifrons is a very sought for species in cultivation due to the particular shape of the leaves and the unusual colour of the new emerging leaf, red or pink. The form commonly cultivated is adaptable only to tropical and subtropical climates as it does not stand temperatures close to 0 °C, but seen the vast distribution area in Madagascar, from the plains up to the mountains, is under way a selection of cultivars adaptable also to temperate warm climates.

This species prefers shady positions, especially when young, but when adult it stands even the exposition in full sun. It does not love soils with a high pH and needs a humid, well drained, substratum.

Because of its small dimensions and the aesthetic characteristics, it is preferable to cultivate it in small groups and not as a solitary specimen. 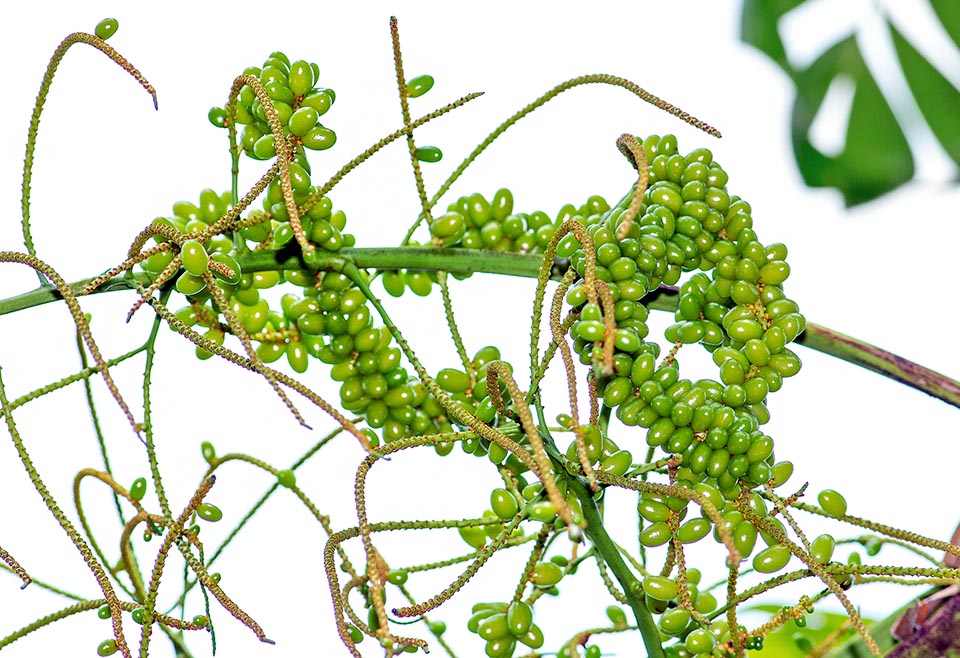 The native Malagasy populations use the young stems to fabricate blowguns for their poisoned darts. The vegetative apex and the most tender part of the foliar bases are instead consumed as food.

Dypsis pinnatifrons is classified as “Least Concern”, species at minimum risk, by the International Union for the Conservation of Nature (IUCN), due to the stable population in its distribution area.