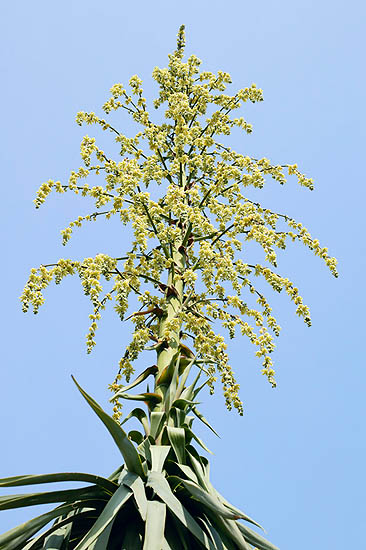 The Furcraea bedinghausii K. Koch (1863) is native to the semi-arid zones of central-southern Mexico, where it grows on the mountain slopes between 2500 and 3000 metres of altitude.

The genus is honoured to the French chemist Antoine François de Fourcroy (1755-1809); the species is dedicated to the Belgian collector H.J. Bedinghaus in whose greenhouse, in 1863, a specimen bloomed for the first time in Europe.

Monocarpic (it blooms only once and then dies) succulent, provided with a rosette of lanceolate leaves, 1-1,2 m long and about 8 cm broad, flexible, of a blue-green colour, at the apex of a stem which can be taller than 5 m, with a diameter of 30-40 cm.

The leaves, with the margins slightly indented, are initially ascending, later, with the time, bending towards the ground and finally hanging down around the stem when completely dry.

It usually blooms between the 10-20 years of age, producing an erect terminal inflorescence, pyramidal, usually 4-5 m long, with greenish-white flowers with a diameter of about 5 cm united in groups of 2-4. The fruits, scarcely produced, are oblong, 5-7 cm long, capsules, containing many seeds; on the contrary a great quantity of bulbils is produced, and they root as soon as they touch the soil, through which the plant is easily reproduced.

Plant of great ornamental value, particularly suitable for the Mediterranean climate zones. It grows well in full sun, or slightly in the shade, on stony, draining, soils and can bear long periods of drought, on the contrary, it fears the stagnations of water which can cause rottenness.

Due to its size, the cultivation in pot is not very spread. It can resist to low temperatures till -5°C for a short time when young, some grade less when adult. A variously utilized fibre is obtained from the leaves. 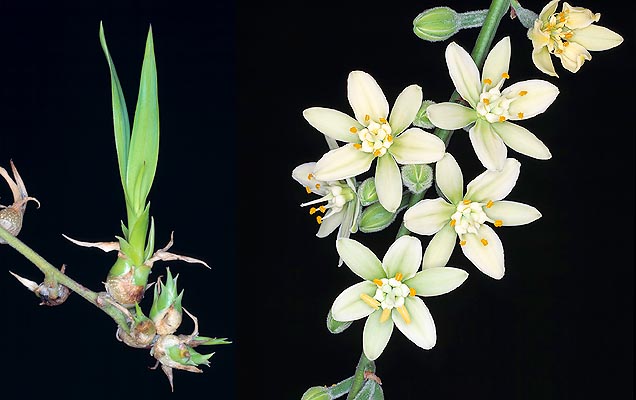 REMARK: recently it has been proposed as valid name of the species Furcraea parmentieri [(Roezl) Garcia-Mend. (2000)], having been previously described (1859) as Yucca parmentieri .

Furcraea bedinghausii was last modified: May 8th, 2018 by Giuseppe Mazza