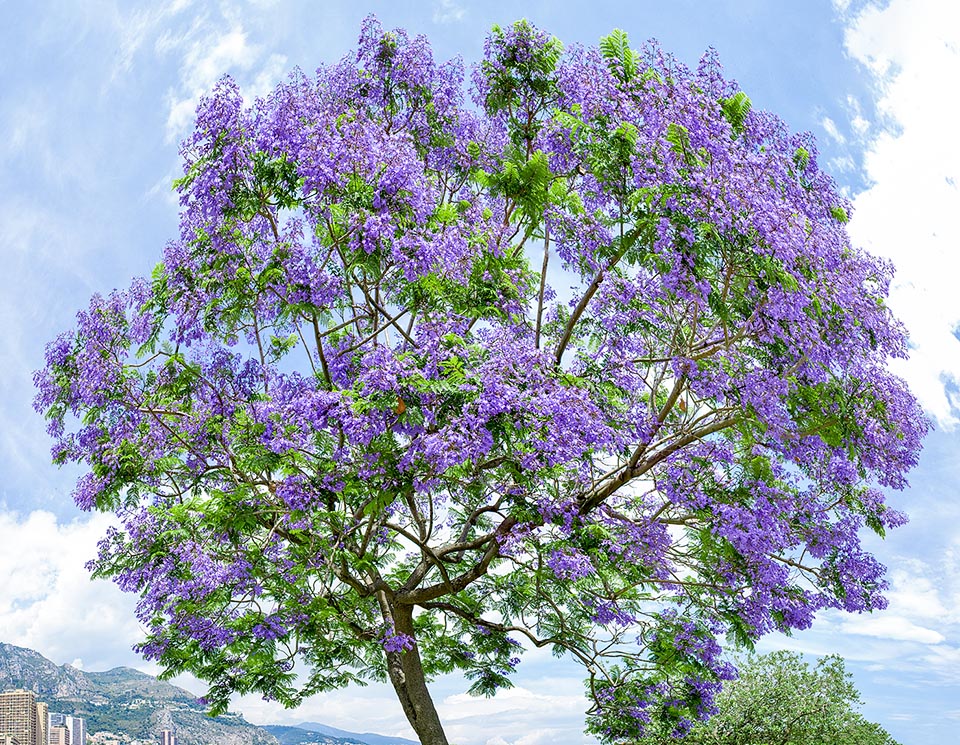 Evergreen, Jacaranda mimosifolia is a species native to Argentina where it can be 30 m tall. The prized wood is compact and hard © Giuseppe Mazza

The genetic term Jacaranda comes from the Latinization of the local name in the  tupi-guaraní languages of Amazonian tribes. The specific term alludes to the morphology of the leaves that remind those of the Mimosa.

It is a tree, at times a shrub, semi-evergreen, 8-20 m tall, up to 30 m in the origin zones, with erect stem and robust branches. The leaves are elegant, of bright green colour, up to 45 cm long, compound, bipinnate, with imparipinnate pinnulae formed by numerous pairs of leaflets (15-41), oval-lanceolate, mucronate at the apex, sessile, elliptic or oblong-elliptic 3-12 x 1-4 mm, 25-7 the terminal ones, they remain on the plant until December-January. 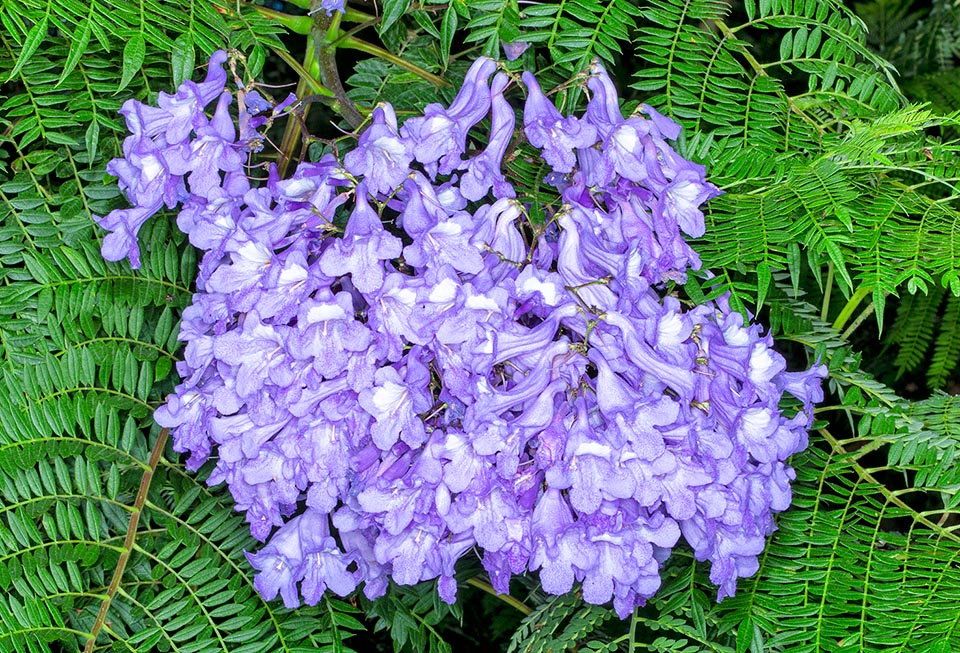 The flowers, of blue-violet colour, are hermaphrodite, zygomorphic, pedunculate and pentamerous. They are united in terminal panicles, up to 16 cm long, erect. The calyx is gamosepalous, campanulate, 3-4 mm long with ± 1 mm long teeth. The corolla is gamopetalous, tubulous-ventricose, bilabiate, with trilobate upper lip, and bilobate lower one. The stamens are four, free. Similarly, to the other species of the genus Jacaranda, the flower has a hairy staminode bigger than the other stamens (3 to 3,5 cm long). The gynoecium is syncarpous with superior ovary, bicarpellate and biloculate.

The fruits are big woody capsules, globose-ovoid, (3,2–6 × 3,7–6 cm), compressed, with wavy margin, dehiscent. They ripe in autumn-winter and remain for a long time on the plant. They are of brown leather colour and contain several winged seeds 9–17 × 11–17 mm. big.

The J. mimosifolia is a quite sensitive to cold plant, growing in open air only in the mild climate regions resisting only for short periods to temperatures close to 0 °C. It loves the sunny expositions with a well drained soil. 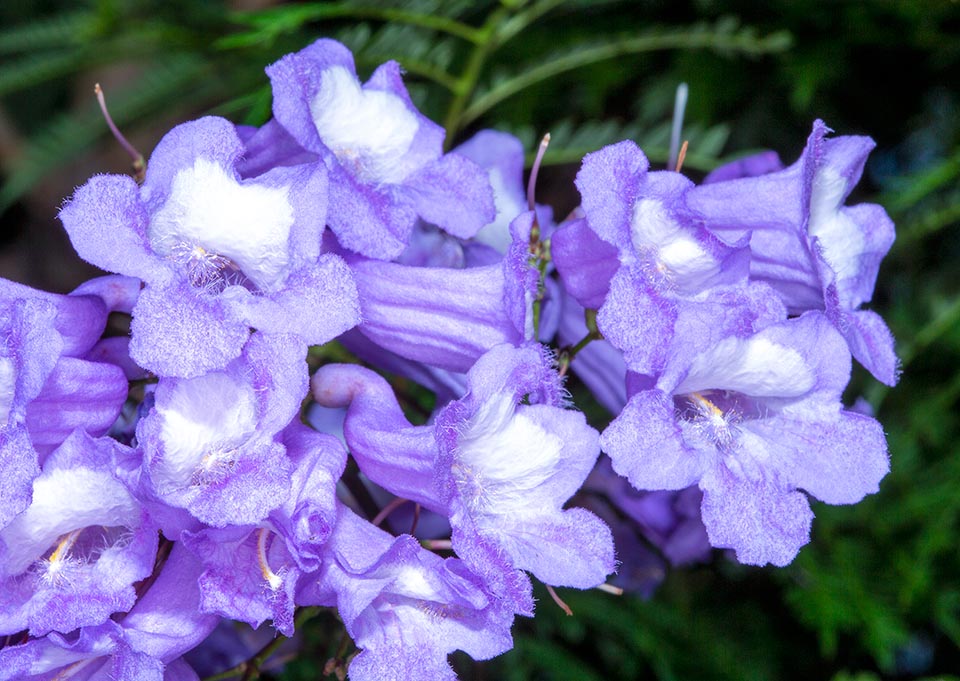 The petals of the blue-violet flower merge in a corolla with trilobed upper lip and bilobed lower one. The sterile staminode, typical of Bignoniaceae here is hairy and bigger than the 4 free stems. Flowers, leaves, and bark have medicinal virtues. Studies now concentrate on antimicrobial, anti-inflammatory, analgesic and antitumor properties © Giuseppe Mazza

Due to its showy and intense blooming and the nice foliage, it is cultivated along the urban avenues, in parks and gardens and does not require particular care, being a resistant plant and with a very fast growth. In the regions with harsh climate, the young specimens of J. mimosifolia can be cultivated in pot and kept indoor. It multiplies by seed in spring, however it is good not to forget that the seeds are recalcitrant, which means that they must necessarily germinate in short times otherwise they lose their germination capacity. Easier is the multiplication by semi-woody cutting to be done in summer (June-July).

The J. mimosifolia gives a compact wood, hard, easy to work, appreciated for lathe and veneer works, known as fake rosewood. It has various medicinal properties. The bark has contraceptive, emetic and laxative properties. The infusion, orally taken, of flowers, leaves and bark is utilized to treat the gastroesophageal reflux, the hiatal hernia, the amoebic dysentery and other gastrointestinal disorders. 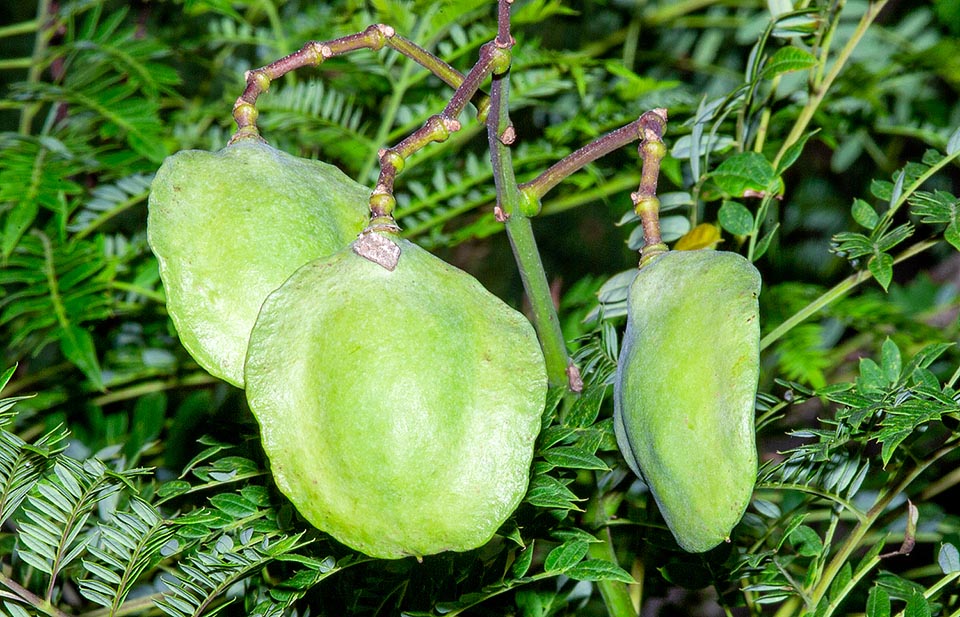 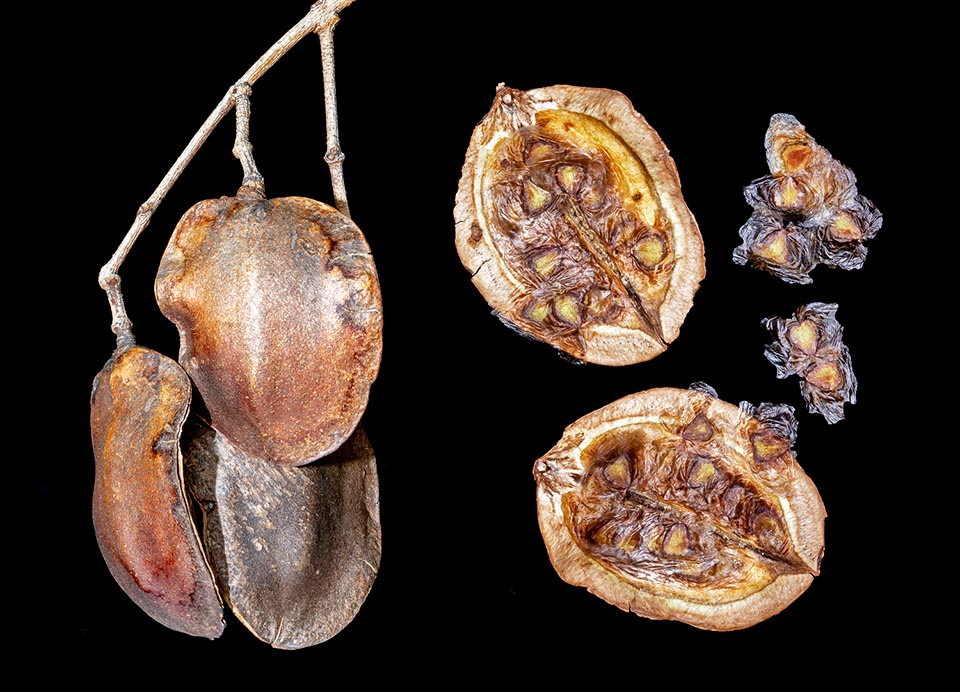 Detail of the pendulous fruits, of leathery color when ripe, and of an open fruit to show the seeds © Giuseppe Mazza

Extracts in vitro of J. mimosifolia have proved to hold an antimicrobial action against Bacillus cereus, Escherichia coli and Staphylococcus aureus. Presently, the studies are mainly concentrated on the antimicrobial, anti-inflammatory analgesic and antitumoral properties;

Jacaranda mimosifolia is cognate to J. cuspidifolia but the last one has compact inflorescences and bigger flowers of a cerulean to purplish blue colour. Recently, they have obtained hybrids of J. mimosifolia × J. cuspidifolia having fertile seeds able to generate very decorative plants, with juvenile blooming, suitable for the cultivation in pot. Yore, J. acutifolia was deemed a synonym of J. mimosifolia, but recent studies suggest the distinction between these two species because of their different geographic origin, seen that J. acutifolia  is a species typical to Peru. Based on this distinction, the specimens cultivated in tropical as well as subtropical areas, as all coming from Argentina, all do belong to J. mimosifolia.