Licuala beccariana (K.Schum. & Lauterb.) Furtado is native to the rainforests of Papua New Guinea, where it grows in the undergrowth, in the plain and in the hills.

The name of the genus Licuala Wurmb is the Latinization of the name “lkowalà” used by the Moluccans to identify the type species Licuala spinosa Wurmb (1780).

The name of the species beccariana honours the famous Italian naturalist and botanist Odoardo Beccari (1843-1920).

The common name used in Papua New Guinea is Titirigi.

Licuala beccariana is a monoecious species with solitary and robust stem, up to 5 m tall and up to 10 cm broad, grey, covered by the fibrous remnants of the foliar bases, especially close to the crown. The growth rate of the stem is extremely fast for a species of the genus Licuala. 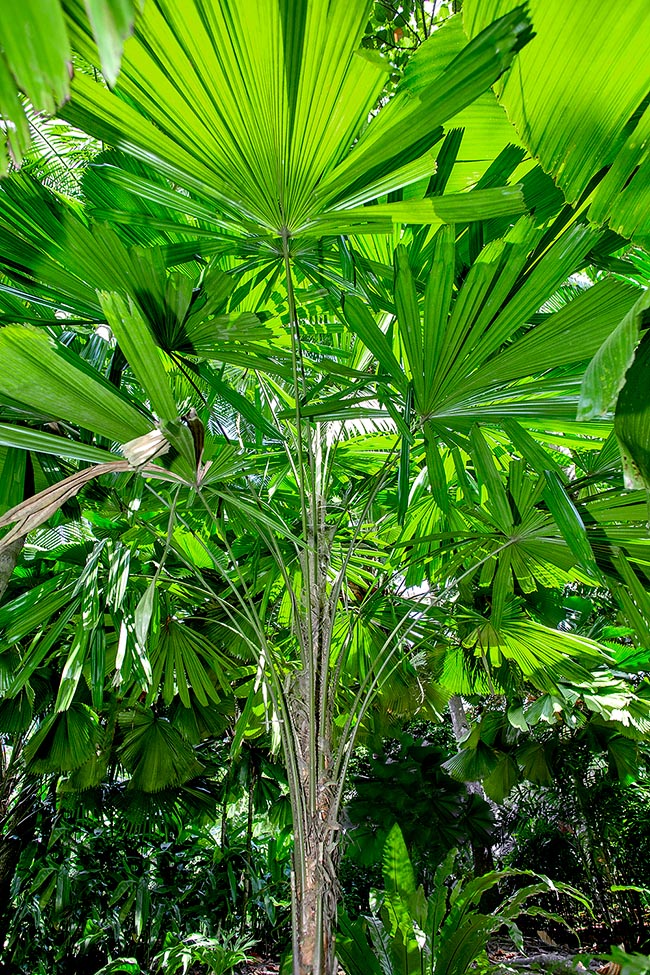 The foliar crown is large, one of the largest o the genus, and is of the genus, and is composed by many palmate leaves, circular, flat, up to 1,5 m long, deeply divided up to the base in dark green cuneiform segments, big  and spaced, rigid, run by evident veins, with truncated apex and toothed in correspondence to the veins. The central segments are usually wider and longer than the others. The young plants present bluish shades on the leaves.

The shape of the leaves shows a great changeableness, the number of the foliar segments can vary from 4-6 to 10-20 and their breadth may vary from 5-10 cm to 20-30 cm.

The petioles are green and thin, up to 1,5 m long and have fibrous bases surrounding partially the stem, covered by small thorns on the margins around the base.

The interfoliar inflorescences are shorter than the leaves and ramified in 2-3 rachillae carrying whitish hermaphrodite flowers.

The fruits are big and red when ripe, produced in great quantity and the heavy inflorescence hangs down. The seed of Licuala beccariana is different from those of most other species of Licuala, big and deeply engraved, like a peach kernel, 2,2 cm long and 1,8 cm broad.

Licuala beccariana is considered a species of high ornamental value, even if still being rather rare in cultivation. The great glossy dark green leaves with the wide rigid segments render it one of the most beautiful and sought for species of this genus.

Being an undergrowth species, it loves expositions in the shade and does not stand the strong winds that danger the leaves until they dry out.

Licuala beccariana is cultivated on loose soils, well drained, preferably sandy and rich in organic substance. It must be regularly watered in order to maintain the soil always humid. When in pot, it grows well if regularly fertilized.

In Papua New Guinea the stems are utilized in the construction of traditional huts or for realizing tools. The leaves are utilized as cover of huts roofs. The endosperm contains mildly stimulating substances of the central nervous system and the ripe fruits are utilized as replacements of the Areca catechu, fruit, cut in slices and wrapped in leaves of Betel (Piper betle).

Licuala beccariana is classified as “Not Endangered” species by the International Union for the Conservation of Nature (IUCN).