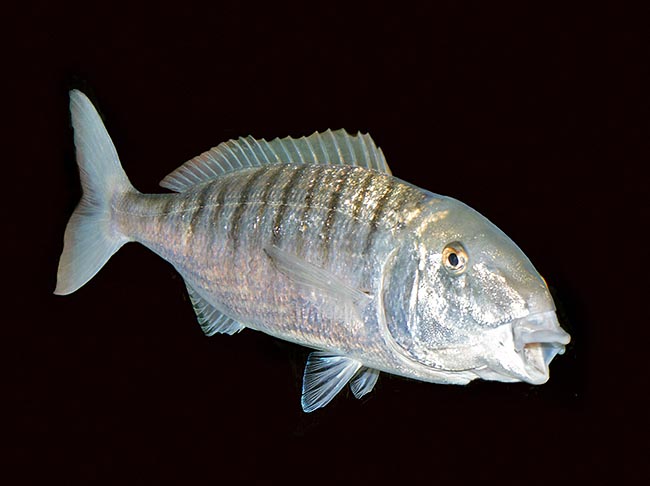 The family of the Sparids (Sparidae) as it is well known, is a very important family of marine fishes, not only because a twenty species are part of the Italian marine ichthyofauna, but also because almost all these fishes are actively caught due to the value of their fleshes and therefore represent an important econo- mic asset for the coastal centres.

Among these species, one which is much important is the Sand steenbras (Lithognathus mormyrus Linnaeus, 1758).

The taxonomy tells us that it is afferent to the group of Fishes (Pisces), class of Osteichthyes (Osteichthyes), subclass of Actinopterygians (Actinopterygii), order of Perciforms (Perciformes), suborder of the Percoids (Percoidei), family of the Sparids (Sparidae) and genus (Lithognathus).

The fishes of the genus Lithognathus, populate all the warm and temperate seas of the world; in the specific, we find the sand steenbras in the Black Sea, the Red Sea, Indian Ocean (especially in the waters of Mozambique), Eastern Atlantic, from Gibraltar Strait to the Cape of Good Hope and in the coastal waters of the Canary and Cape Verde Islands. It is also quite abundant in the Mediterranean Sea.

The sand steenbras is a fish (as well as the other species of the genus), tending to live in not too deep waters, from 10 to 120-130 m of depth (other species of sparids prefer to live along the coastlines. It loves the soft bottoms, and, as in the Mediterranean, covered by prairies of Posidonia oceanica, family Posidoniacee, a monocotyledonous, angiospermous, aquatic plant. It nourishes of fishes, crustaceans, molluscs, annelids and of some other sea organisms.

The sparids are endowed of very robust teeth and variously specialized: in some species, the teeth are cutting and incisor-shaped, otherwise, they are similar to the molars, used for crushing the most coriaceous material, for instance the exoskeleton of the crustaceans and of the molluscs, or sharp and with these ones they can tear off easily the flesh of their preys, for instance, fishes. 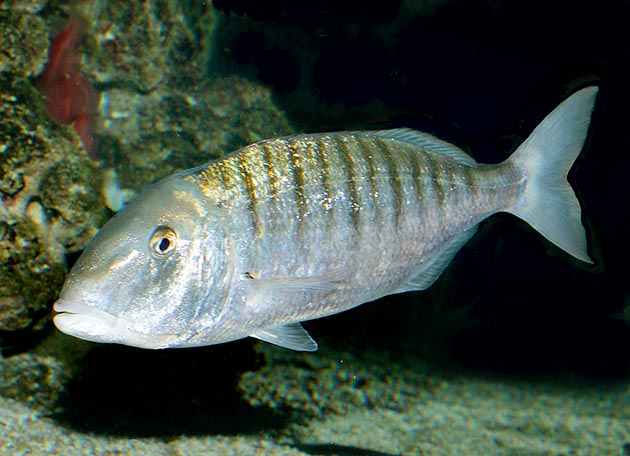 Unmistakable due its vertical bands livery, like the Bream, changes sex while ageing © Giuseppe Mazza

For this reason, the various species of sparids do have diversified diets as well as habits of life.

In the case of the sand steenbras, sharp teeth and molar-like ones are present.

However, the teeth are not planted into the palate, but n the jaws.

The Lithognathus mormyrus reaches the length of 30 cm and has a livery with a fundamental silver-grey colouration, broken by a dozen of blackish or grey vertical lines. There is no somatic sexual dimorphism between the sexes.

This species of sparid lives in small isolated schools, formed by about twenty individuals; in reality, compared to the other sparids, this fish cannot be defined as coastal, as, even if it stays preferably close to the coasts during the warmest months, when the winter approaches, it goes to the open seas and to depths (100-130 m) where it cannot be excessively affected by the temperature changes.

The female lays very small, diaphanous-transparent, eggs, but never grouped in clusters due to the absence of oily extensions.

As is the case of the Gilt-head bream (Sparus aurata), its cousin, or of the Common seabream (Pagrus pagrus), also here we have the phenomenon of the “proterandrous hermaphroditism”, which means that the fries are born as males and then become females with the time. This fish has an average lifespan of 13 years.

Also this species is actively fished for the goodness of its flesh; in spite of this, thanks to specific fishing programmes which do not hinder its reproduction, as they respect its vital cycle, this fish, after the IUCN, is not an endangered species, at least for the time being.