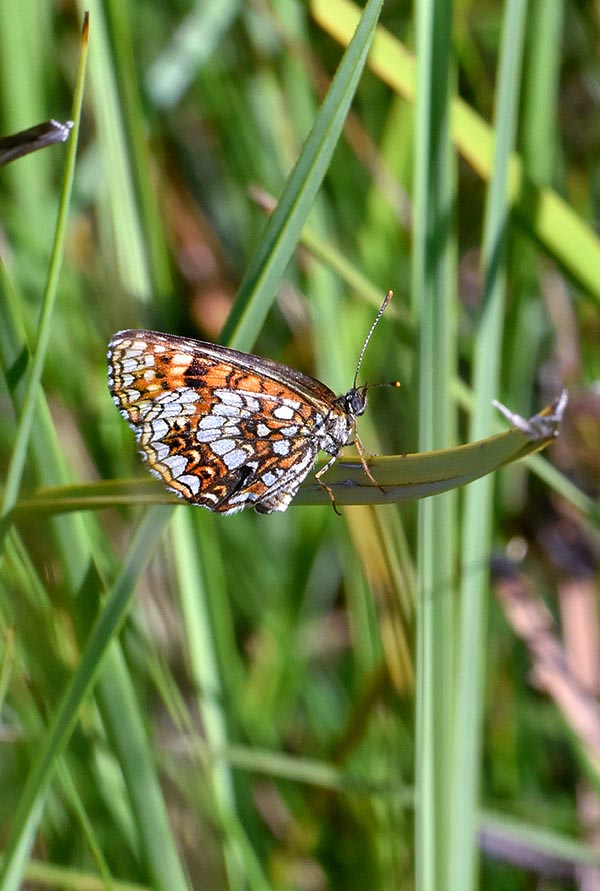 Between the grass, wings closed, the Melitaea diamina often get unobserved © Gianfranco Colombo

The Diamina or more generically the False heath fritillary (Melitaea diamina Lang, 1789), belongs to the order of Lepidoptera and to the family of Nymphalidae.

As previously said, in this family, deemed to be the most substantial among those grouping the diurnal lepidopterans, are usually included more than 6.000 species of butterflies scattered all over the world. Also this butterfly is to be included among the more variable fritillaries, in particular in the drawing of the fore wings, in the colour tone and in the size.

It stands among the smallest Melitaea of our meadows and often reaches such reduced dimensions to be mistaken with the smallest ones of the genus Clossiana or with the congeners Melitaea varia and Melitaea aurelia. However, due to the very dark shades covering at times almost totally the drawings and the veins of the wings, this butterfly is usually easy to identify.

It is a common butterfly where localized but its range is somewhat reduced if compared with the other fritillaries.

The etymology of the scientific name of the Melitaea diamina is, like all the names given by the first naturalists, unsure and subject to various interpretations, in particular for the first part of the binomen evoking the honey, as explained for the Melitaea cinxia.

The etymon of the species diamina is thought to be coming from a composition of two Greek terms: Dia is another name of Hebe, daughter of Zeus and Hera and her name means “the celestial”, “the divine”. Mina was an ancient Greece currency.

The European vulgare names are: in English False Heath Fritillary (to distinguish it from the Melitaea athalia that often has also rather dark forms), in German Sumpfwiesen Scheckenfalter, in French Mélitée noirâtre or Damier noir, in Spanish Doncella oscura and in Dutch Woudparelmoervlinder.

The Melitaea diamina has a range more restricted than its congeners, preferring wetter environments and often frequenting also peatlands but in the same time loves grasslands and slopes with preference for the cool and woody alpine valleys, interspersed with large flowering meadows. It is a butterfly that lives at moderately high altitudes therefore disdaining extremely warm and dry locations. It is present on all the mountain ranges of the continental Europe with some isolated colonies in Norway, Sweden and Finland. As a matter of fact, it is missing in the coastal insular and peninsular Mediterranean areas, in Great Britain and in most western Europe. It is absent in Africa but lives along the temperate cool belt of Asia up to Japan. It reaches even the 3.000 m of altitude with an ideal height between 300 and 1500 m above the sea level.

The Melitaea diamina is a small butterfly as it reaches at the most 42 mm of wingspan but, as an average, just exceeds the 30 mm. Usually, the female is bigger and of paler colour. It territorially overlaps with all similar fritillaries, hence there is always a difficulty in detemining it correctly when in presence of more species and with attenuated colours, while remaining in any way the darkest butterfly among all and this characteristic, when well evident, gives the possibility to classify it without any problem. 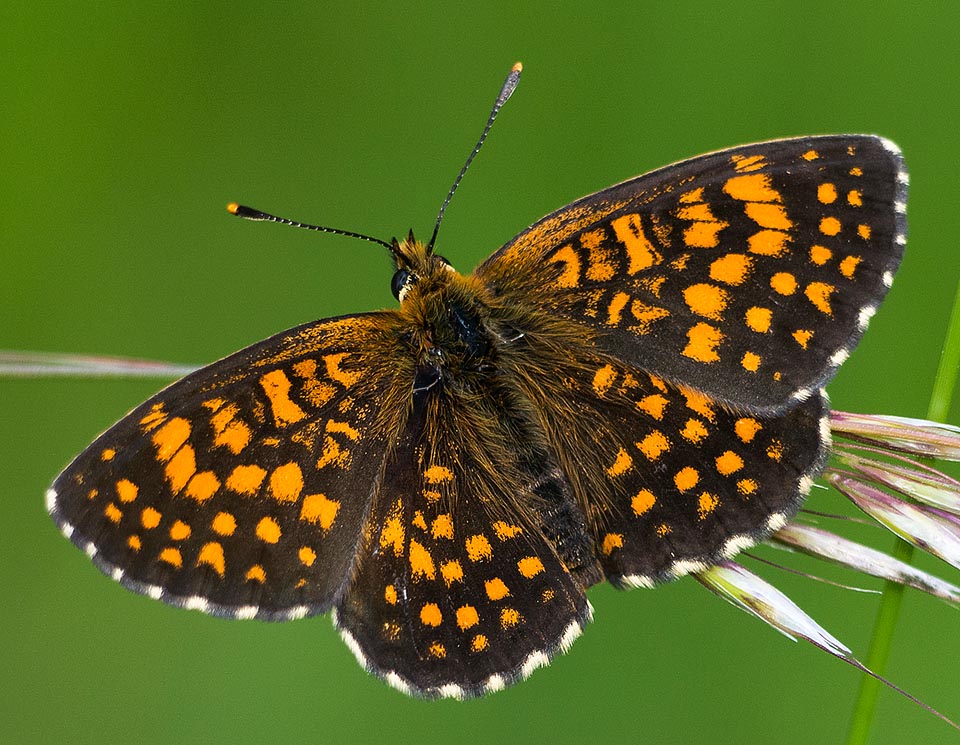 Even if it can reach the 42 mm of wingspan, it just averagely exceeds the 30 mm © Gianfranco Colombo

The base colour is the brownish orange typical of all fritillaries, with blackish veins and lines that crossing originate small squares of different size. In the case of the diamina, usually these drawings cover completely whole areas of the wings thus totally occulting the base colour and rendering the butterfly practically dark and with a dark brown uniform colour. If in the fore wing some facets of the base orange colour keep always visible, in the hind wing they often disappear completely, leaving the wing wholly dark and crossed only by a very thin discal stripe of small crescents, from where transpires the base colour.

The sharp contrast between the preeminent dark part and the few orange crescents, is a unique characteristic of this butterfly. In specimens where these peculiarities are not so evident, is then necessary a careful reading of the lower face of the wings.

It should be noted, however, that the Melitaea diamina also in the dark forms, exhibits in the submarginal areas of the upper face of the wings and along their whole length, well evident white crescents.

In any case, the key to reading for the fritillaries and the certainty of a correct identification may take place only by interpreting the drawings placed on the back of the verso of the hind wing. The diamina shows in this area a yellow submarginal stripe with a series of small whitish spots surrounded by black and, in the discal area, a very clear line of white crescents well framed by black lines. 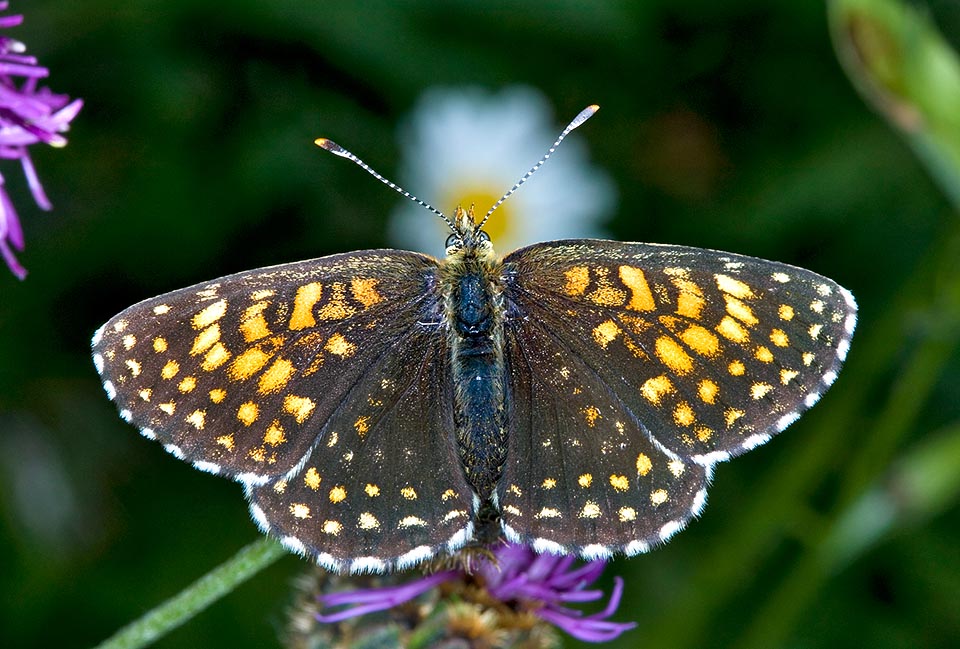 The colour, quite variable, is darker than the other fritillaries with whom often it coexists between 300 and 1500 m of altitude over the sea level © Giuseppe Mazza

On the verso of the fore wing, totally suffused with orange colour, we find some well evident black spots that starting from the side cross, interrupting, the discal area. Well developped and robust antennae dotted with black and white, with flattened and yellowish vertex. Like all fritillaries it flies during the warmest periods of the year, starting from May up to early October. Even if of small size, it is a butterfly easy to be sighted as it spends a lot of time flying, going from flower to flower and also easy to approach and observe when feeding.

The Melitaea diamina is bivoltine (has two broods in a year) and has a flying period going from May to September. The females lay their eggs directly on the back of the leaves of the host plants where the caterpillars build a silky nest in which they gather during the first stages of their life. When adult they go away to complete their growth and to pupate in separate locations. The second brood spends usually the winter in the stage of small larva and occasionally already at the stage of chrysalis. The caterpillar when adult is about 2,5 cm long, is blackish with orange spots that intersperse along the whole length of the body on parallel rows.