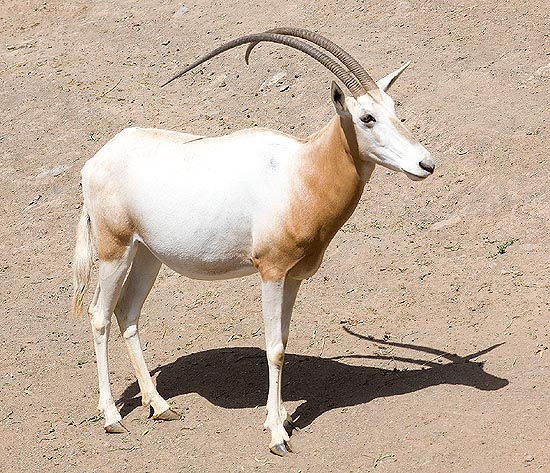 The oryx are animals which have extremely well adapted to the desert habitat; however, the Scimitar-horned oryx (Oryx dammah Cretzschmar, 1826, family Bovidae order Artiodactyla), is maybe the most extreme example of this type of adaptation.

Originally, it was present in vast zones of North Africa, so much that it was well known also to the old Egyptians.

Nowadays, it is considered almost extinct in the wild, but is present in protected areas and in parks in Morocco, Tunisia, Senegal and other countries, and even in other continents.

Once, its range of distribution included Egypt, Libya, Tunisia, Morocco, Mauritania, Chad, Mali, Nigeria, and Niger, but the density was in any case very low, due to the unfriendly environment of the desert, which does not allow big concentrations of herbivores, also if super-specialized.

Naturally, this animal did not frequent only the sandy dunes or the hard and stony lands of the desert itself, and it was found also, and mainly, in the steppe and sib-desert zones, in fact, in spite of its physical characteristics of ship of the desert, quite rarely ventured in the heart of the same.

Its optimal habitat was, therefore, the steppe belt of transition between desert and Sahelian bush and, as it did not love to enter the desert, it was found quite rarely in the bush. 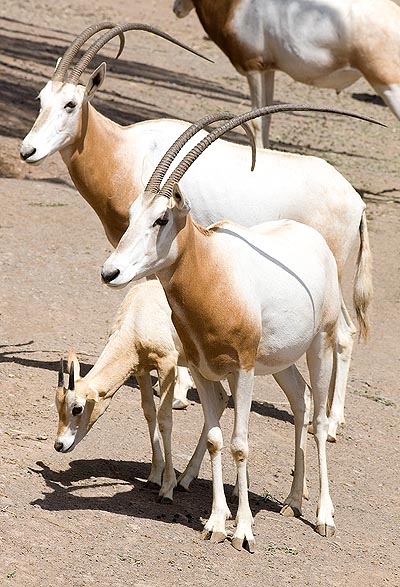 Also restricted areas between the dunes, where the vegetation, whatever poor, grows up, were colonized by the scimitar-horned oryx, and also the conformation of the mouth and of the dental apparatus of this antelope (and also of the other oryx, all adapted to the arid habitat), enabled it to find food where very few other animals may survive.

The mouth has a modest opening, but the row of incisors and the molars, broad and with the prominent cuspids, are capable to tear off and grind the hard and short leathery grasses which live at the base of the dunes and along the drainage zones at the edges of the desert.

Also tubers and roots are, if needed, utilized and at times the animal burrows with the front hooves for getting them.

The survival in the desert requires a series of particular characteristics, and for this reason this antelope (these considerations apply also to Oryx gazella beisa, Oryx callotis and Oryx gazella gazella) has some adaptations which allow it to withstand without damage prohibitive temperatures and environmental conditions.

In desert climate, for a 150 kg individual are sufficient 4 litres of water daily; furthermore, this animal is able, if the water is lacking, to increase its body temperature from the normal 36° to 45°, before that its organism is compelled to cool down by means of evaporation, chiefly through the phenomenon of the “panting”, as, for instance, the dogs do.

But, in the oryx case, the panting causes evaporation mainly through the nose.

Furthermore, the oryx may increase the concentration of the urines, with less dispersion of liquids (a sort of recirculation) and to reabsorb the water of the faeces which, therefore, in periods of water deficiency, appear extremely dry, even if fresh, almost lyophilized and with a paler colour.

Obviously, also other expedients are utilized and the animal avoids the exposure to the sun during the warmest hours, looking for the shade, even if only of a rock, or may burrow a hole in the sand and move and graze during the night. 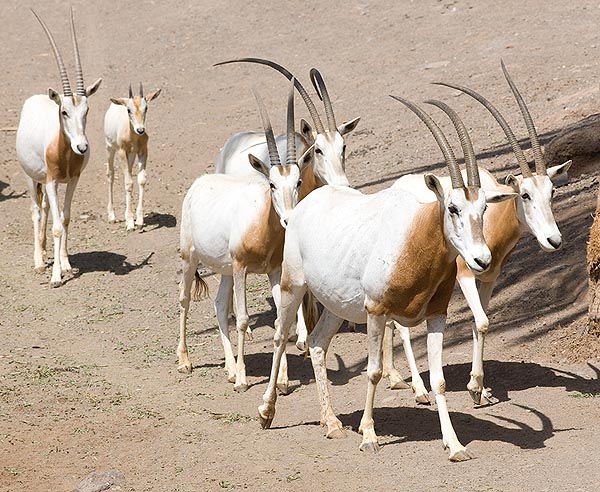 The scimitar-horned oryx is an animal with a coat which is paler than other oryx, as it is almost whitish, with thinly diffused tawny hairs.

Darker dots are present, but however with a more tenuous colour than in the beisa or the gemsbock, usually of rust colour; also the facial mask is white with concolorous contrasts.

The most common livery appears, therefore, in its whole, as whitish with reddish or pale brown neck and chest.

The horns, present in both sexes, are long and curved, and this justifies its name, very thin, especially in the female, of rounded section; sharp and finely ringed.

The record of length is of 127,3 cm, but the average is lower, usually around the metre for the male.

Due to the environment frequented, it is a nomadic herbivore and the males show a territoriality particularly related to the reproduction.

Oryx dammah was last modified: May 1st, 2020 by Giuseppe Mazza