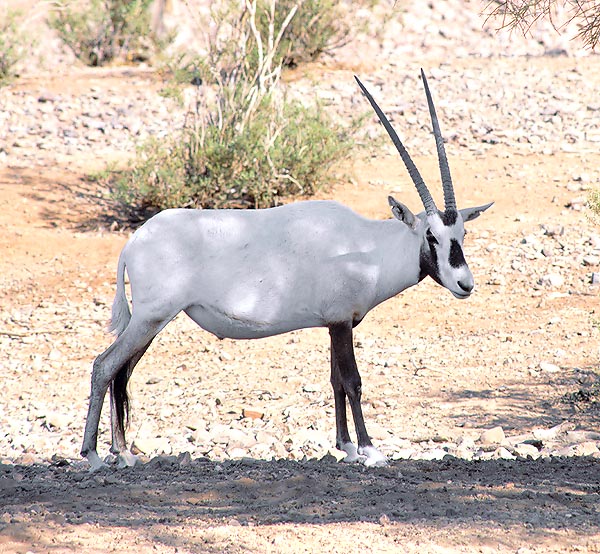 Mistaken, at times, with the Scimitar-horned Oryx (Oryx dammah), the Arabian Oryx, or White oryx (Oryx leucoryx Pallas, 1766, family Bovidae), ha dimensioni decisamente inferiori alle altre specie di orice (in media 60 Kg di peso per 90-100 cm al garrese), is quite smaller than the other species of Oryx (as an average, 60 kg of weight per 90-100 cm at the withers), is, on the contrary, a separate species.

The scientific name Oryx comes from the old Greek and means antelope, whilst the second name, always in old Greek, means white antelope.

Once much more common, all over the Arabian Peninsula and, northward, up to Kuwait and Iraq, it is nowadays limited to particular areas, such as, for instance, the protected area of Mahazat-as-Sayd, in the western part of Saudi Arabia, a zone of approximately 3.000 square km, the Uruq-Bani-Ma’arid reserve, of more than 5.000 square km, the Arabian Oryx sanctuary, in Oman, but there are areas where it is present, also in Israel, at least in three locations, in the Negev Desert and Northern Arava. Furthermore, in 2007, a reintroduction project began also close to Abu Dhabi.

In any case, excluding other populations in semi-captivity or in zoological gardens, it seems that the wild specimens are about 1.200, and for this it’s a species to be protected and managed with care, however some reports talk of a slow, but constant, increase, in Israel as well as in Saudi Arabia, and for this reason it should not be any more included among the animals under risk of threatened, but rather into the category D1, that is, “vulnerable species”.

Before the twenties of the last century, there were two areas of diffusion of this antelope separated by more than one thousand “empty” kilometres. A more reduced northern population, and a southern one, more numerous, concentrates mainly around Rub-al-Khali and the arid plains of central and southern Oman. In the fifties, the white Oryx disappeared from the northern area and greatly reduced in number in the southern one, but it is now recovering, thanks to the measures taken. 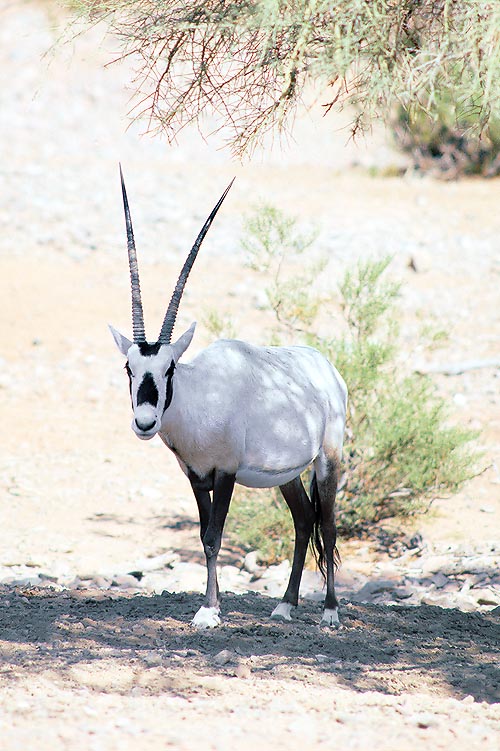 As a conclusion, we may say that the countries from where the white Oryx has disappeared are: Egypt, Iraq, Kuwait, Syria, Jordan, Yemen and United Arab Emirates, whilst it is present in Saudi Arabia, Israel, Oman and Bahrain. Being there at least 1.200 wild animals, to which we may add, without any problem, at least 6.000 individuals in semi-captivity in the most different zones of the world, we may have certain confidence about the future of the species, species which has been, in the past, in critical situation, also and mainly due to the habitat extremely open, without shelters and natural coverage and so much arid to oblige even animals highly adapted to the desert, to go to some well identifiable areas and which limited, in some limits, their possibility of displacement.

The structure of this Oryx is not much different from that of the other species, dimensions apart: robust animal, it has a “squared”, rectangular, body, with straight and horizontal top line. Also the neck is thick and muscled, the head rather elongated, the ears little developed, especially if compared with the other similar sized antelopes. The colour of their coat is white, as the name suggests, at times candid, other times creamy, and neatly contrasts with the black colour of the legs.

Often, in the separation point between the white of the body and the black of the limbs, there is a reddish or pale brown zone which, on the back, may occupy the whole thigh, whilst in the forelimbs is usually more limited but which may extend to the lower part of the throat. This characteristic is not, however, always present and there are specimens where the contrast between the white and the black is quite evident. The snout has a mask, formed by a triangular dot with upper apex on the back of the muzzle and by a lateral black stripe beginning in the zone of the eye. At the base of the horns, furthermore, there is another dark triangular dot, whilst the “feet” are often white, as if the animal should wear two pairs of leggings. The horns, present in both sexes, are similar to those of the other species of Oryx, long and thin, slightly curved backwards, but much less than in the scimitar-horned Oryx, and their length usually does not exceed the 70-75 cm.

Highly specialized in function of the life in the desert (see texts about the other species of Oryx), the white antelope is even further aided by the colour of the coat, which does not absorb the rays of the sun, but, on the contrary, tends to reflect them. Like in the other species, the perspiration, by means of the phenomenon of the “nasal panting”, starts only when the body temperature goes from 36 to 45 degrees Celsius, whilst the water present in the excreta is reabsorbed and utilized, so that the faeces are practically lyophilized also when just produced; the urines are concentrated at the maximum, resulting in a dark colour and finally, the animal is capable to utilize in the best way and in its own advantage every trick meant for reducing the absorption of heat and dehydration, remaining little exposed during the warmest hours, which it spends in the shade of some rocks, moving and grazing, at times during the night and so on. 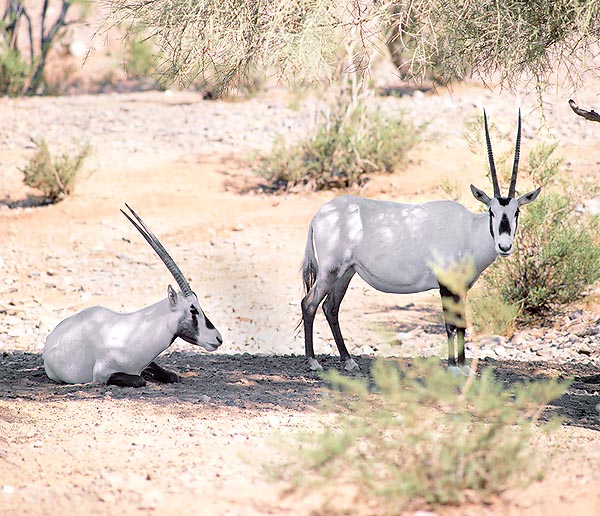 It seems to be ascertained, even if the mechanisms keep unknown, that this Oryx, more than the other species, is equipped with a sort of a weather station, as it has the capacity to foretell and localize the areas where the rainfalls will occur or have occurred, and to go there, with a GPS precision, effecting very long, and perfectly synchronized with the atmospheric event, displacements.

The Arabian Oryx often forms groups from 2 to 15 or 20 heads, but concentrations of a hundred of individuals have been reported, however I believe that these events were due to particularly favourable conditions assembling different groups in the same zone.

Although it is a “grazer”, that is a consumer of grass contenting also of dry and coriaceous vegetables, it is not an absolute grazer, as a matter of fact, being obliged to capitalize all the available proteins and all the humidity possibly gotten from the food, it switches willingly and effortlessly to the “browsing”, tearing off leaves, buds or berries from the branches of the shrubs and low plants, and even digs tubers and roots from the earth. Being a “rain-maker”, in fact, is not only in function of the finding of water, but also of tender and rich in liquids herbs which quickly sprout after a shower, even on the most barren lands. Researches done in Oman have shown a particular predilection for the Desert grass or Stipagrostis, grass growing in tufts, in desert areas, rich in proteins, especially when in flower.

For what concerns the hierarchical relationships and the postures of dominance and submission, please see Oryx gazella beisa: the possession of deadly weapons such as the sword-like horns of the Oryx orients the relations towards some caution, often highly specialized, in order to reduce the violent clashes.

Oryx leucoryx was last modified: May 8th, 2020 by Giuseppe Mazza