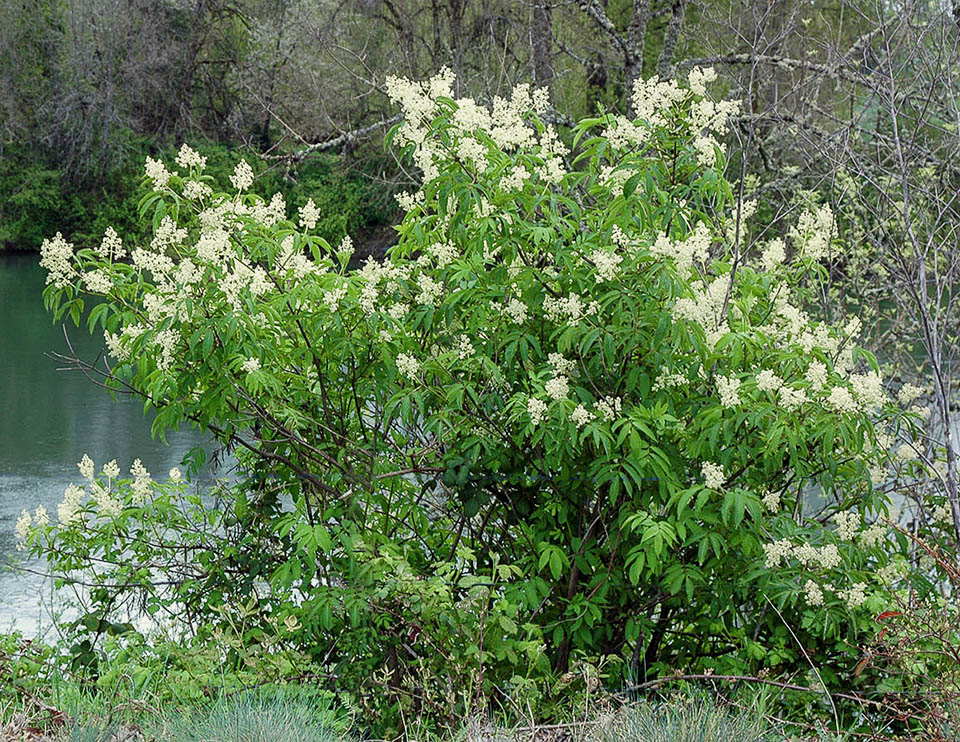 It is present in the clearings, in the margins of beech-maple woods, in the half-shaded sites, in the stony grounds and along the mountain slopes up to the limit of the vegetation of the trees, from 800 to 2000 m of altitude. It can be found in the riparian belt, i.e. along the waterways, and usually it forms sparse maquis though it can form copses in some areas of its distribution area (northern Utah, USA). S. racemosa stands out due to the colour of its fruits especially if contrasting with the dark green colour of the firs and the pines, or with the lighter green of beech and ash trees.

In the past, the species belonged to the family Caprifoliaceae, but as a result of genetic testing, it has been placed in the new family Adoxaceae. “sambucus” is the name used by Pliny the Elder and by Lucius Junius Columella and comes from the Greek “σαμβύκη” “sambúke”, sambuca, a stringed musical instrument made of elder wood (the epithet “racemosa” comes from the Latin “racemus”, cluster, with reference to the racemose inflorescences.

Sambucus racemosa is a shrub or a small tree up to 6 m tall, with many pubescent branches, tender or slightly woody having brown-violet bark and 2 mm lenticels, elongated longitudinally, rather clear. 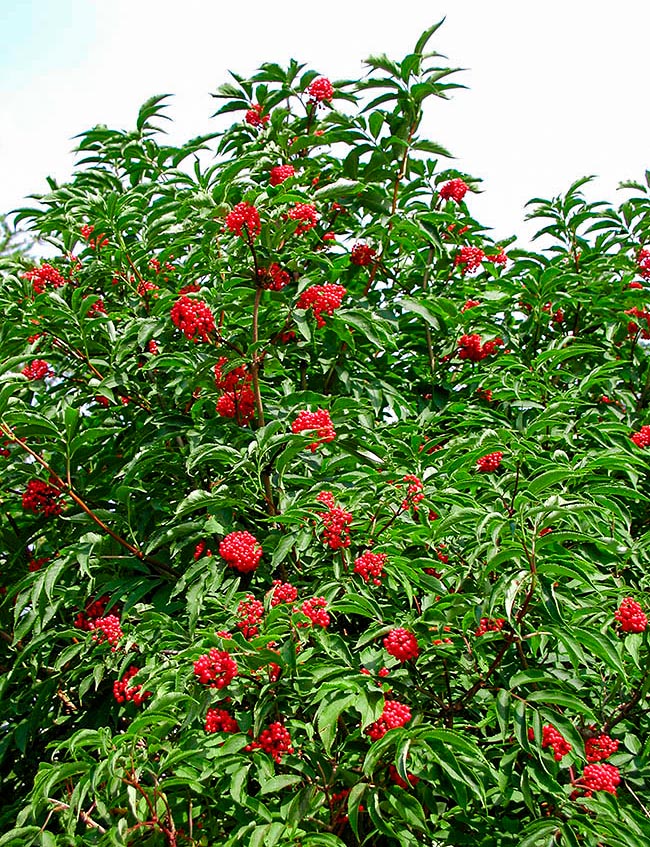 Shrub or small tree, up to 6 m tall, it has deep roots and at times rhizomatous stems © Giuseppe Mazza

The roots are very ramified and extend up to 1 m of depth. At times, rhizomes are present.

The leaves, downy and of pale green colour, in the lowest pagina, are opposite, deciduous, briefly petiolate, 10-25 cm long, imparipinnate, formed by (3) 5 (7) leaflets, usually petiolate, the lowest ones being at times sessile, each of them is up to 4-8 cm long, generally lanceolate and irregularly serrate in the margins, The leaves, if robbed, release a strong unpleasant odour.

At the extremity of the branches forms the inflorescence that is a conical panicle formed by numerous small flowers that, when closed, are of pink colour. The calyx is sub-null, glabrous, with 5 short triangular teeth and corolla rotated, white, yellow or greenish with 5 ovate-rounded lobes that, when ripe, are more or less reflexed.The flowers are hermaphrodite with yellow ovoidal anthers that take form before or at the same time as the leaves. The flowers open in late spring, early summer, perfumed and are visited by hummingbirds and butterflies.

The fruit is a bright red drupe, violet at times, containing 3 to 4 kernels measuring 3-3,5 mm. The dissemination is done by the animals that ingest the fruits and free the seeds with their faeces (endozoochorous dissemination).

Following cultivars are typical of the nursery trade: S. racemosa ‘Black Lace’, with leaves having a dentate margin, of dark, almost black, colour; S. racemosa ‘Lemony Lace’ with golden green foliage, initially reddish; S. racemosa ‘Sutherland Gold’ with green leaves, initially bronze in colour.  This last cultivar has been awarded the important recognition “RHS Award of Garden Merit”, given by the Royal Horticultural Society because of its elegance and resistance to low temperatures (<-20 °C).

S. racemosa is often used in silviculture to stabilize the soil and the erosion thanks to its thick root system. Due to its fruits, very ornamental, it is often found in the mountain gardens to form fences, borders, or as isolated plant. 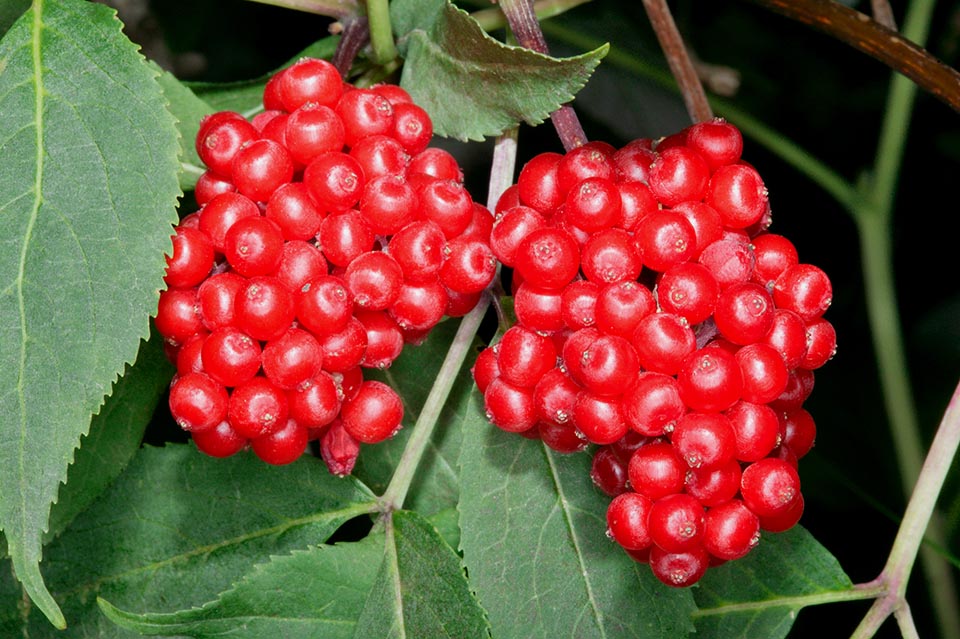 Red elderberry is a toxic species, but the cooked fruits, without seeds, are edible. Various parts of the plant have medicinal virtues © Giuseppe Mazza

S. racemosa can be propagated vegetatively by means of dormant hardwood cuttings collected in autumn or in winter and planted in humid soils as “alive palificated”, or in spring or summer from cuttings of roots or rhizomes. All cuttings benefit from the use of a rooting hormone solution. It can be also easily reproduced by seeds. For a good germination, the dried or fresh seeds are put for 30-60 days in a warm and humid bed (20-30 °C), then, for at least 90-250 days in cold stratification (5 °C). The sowing is suggested between winter and spring.

S. racemosa is a toxic plant, but in popular medicine, it is employed for its purifying, carminative, purgative and diuretic properties. The fresh shredded leaves reduce swellings and serous tumefactions if applied to the joints. Herbal teas and decoctions of the dried fruits are traditionally utilized to fight intestinal inflammation. The fruits, deprived of the toxic kernels, can be eaten only if cooked. They contain vitamin A and C and are suitable for preparing jams and, after fermentation, quality grappe.