The species is native to the northern coast of Venezuela where it grows in the semi-deciduous forests on rocky or sandy soils, between the 100 and 700 m of altitude.

The exact derivation of the generic term is unknown, the most accredited hypothesis is that it comes from the name “syagrus” given by Pliny the Elder (26/24 A.D. – 79) to a variety of date palms; the specific name is the combination of the Greek adjective “στενός” (stenós) = narrow and “πέταλον” (pétalon) = petal, with obvious reference. 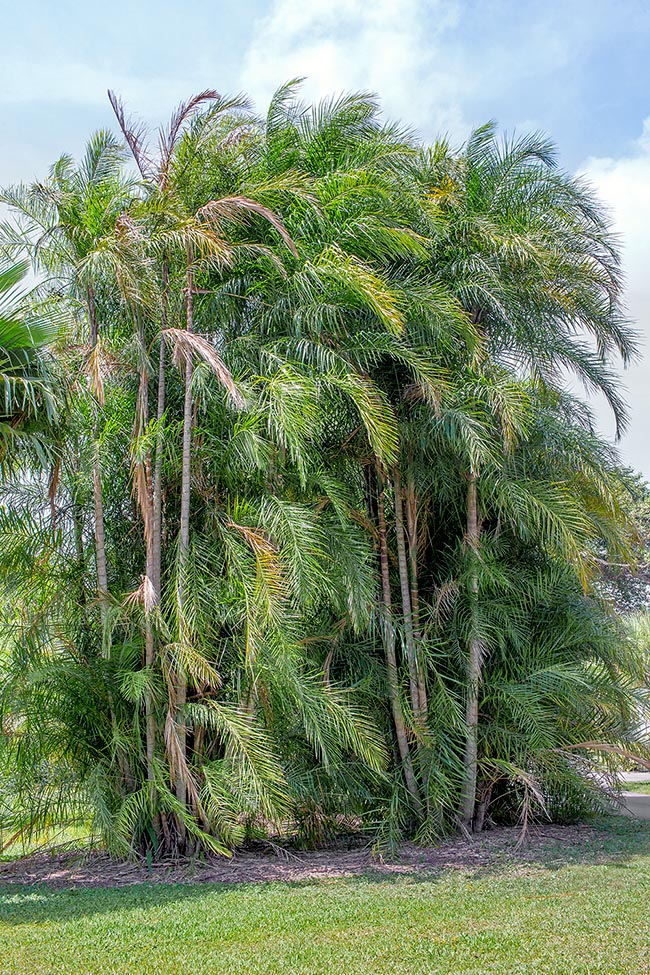 Native to Venezuela, Syagrus stenopetala is usually cespitose with 10-15 m stems and 10-18 cm of diameter. Little known in cultivation, it could have a great ornamental value in the tropical gardens. The fruits are edible but fibrous © Giuseppe Mazza

The Syagrus stenopetala Burret (1932) is a monoecious unarmed tufted species, rarely solitary, with erect or curved stems, 10-15 m tall and of 10-18 cm of diameter, of pale green colour tending to darken in the oldest part and on which are visible the annular traces of the fallen leaves.

The leaves, on short petiole, are pinnate, slightly arcuate, up to about 2,5 m long, with 90-110 pairs of linear leaflets with asymmetrical acuminate apex, rather rigid, irregularly arranged in groups of 2-4 along the rachis and inserted at different angles, but mainly upwards, in the central part 50-70 cm long and 2,3-2,5 cm broad, of intense green colour above, slightly paler below. The foliar basis, 1-1,6 m long, open on the side opposite to the petiole, presents fibrous margins.

Inflorescences among the leaves, up to more than 1 m long, of cream colour, initially enclosed in a woody spathe about 1 m long, with ramifications of first order and unisexual flowers arranged in triads (one female flower between two male ones), but in the terminal part of the rachillas where are present only male flowers, solitary or in pair. Ellipsoid fruits, 3-4,5cm long and of 2-2,5 cm of diameter, of yellow orange colour with apex covered by brown tomentum, containing only one ellipsoid seed 2,5-3,5 cm long and of 1,5-5 cm of diameter.

It reproduces by seed, previously kept in water for 3 days, in draining loam maintained humid at the temperature of 26-28 °C, with germination times of 10-18 weeks.

Considered for a certain period synonym of Syagrus orinocensis, it has been separated and considered as distinct species due to its tufty posture, the different places and sites of origin and other particulars concerning flowers and fruits.

Almost unknown in cultivation, but of big ornamental potential thanks to its thin stems and the elegant foliage, it can be utilized in the tropical and subtropical climate regions where, when adult, it can bear exceptional values of temperature around the 0 °C with possible damage to the foliage.

It requires full sun or partial shade and adapts to various types of soil, provided draining, sandy to clayey, slightly acidic to alkaline, it can bear short dry periods, but it is preferable to irrigate it regularly in the climates with long and dry summers. The fruits are edible, but with fibrous pulp, and utilized for feeding the domestic animals, the stems are employed in the local dwellings.

Syagrus stenopetala was last modified: May 18th, 2019 by Peppino