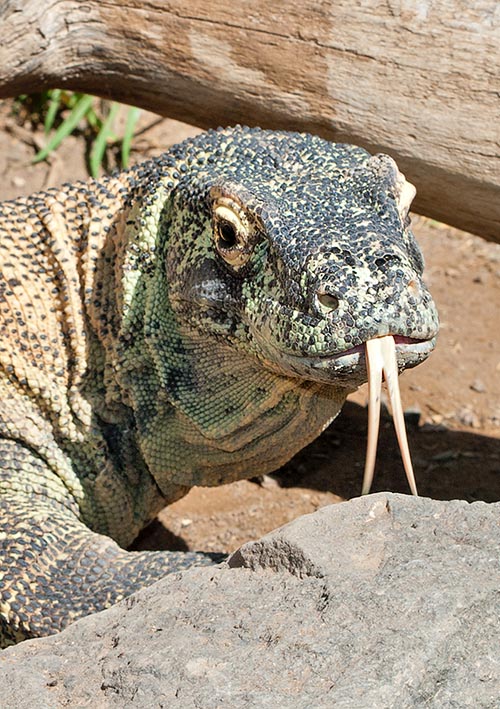 Komodo dragon (Varanus komodoensis) was discovered in 1912 only © Giuseppe Mazza

The Komodo dragon (Varanus komodoensis Ouwens,1912) was discovered only in 1912 by the biologist P. Ouwens, scientific officer of an exploratory ship of the Dutch Navy, during her staying in the Komodo islet, while the ship was sailing in the South Seas with the charge to precisely map this complex geographic area.

The common name “varanus” comes from the Arabic “waral” and the family of the Varanidae leads to the suborder of the Saurians (Sauria), order Squamates (Squamata), subclass of the Lepidosaurians (Lepidosauria), class Reptilians (Reptilia).

Paleontologically, the present monitor lizards seem to descend from some giant varanids, which went extinct by the end of the Pleistocene.

Amongst the various species of varanids, many exceed the 2 m of length and the Komodo dragon reaches and even exceeds the 4 m.

Presently the Varanus komodoensis is endemic to the island of Komodo, in the Sunda archipelago, a group of islands in the western part of the Malaysian Archipelago.

More precisely, it is found also on other islets, whilst in other areas it has totally disappeared. It is present on the islands of Komodo, of Rinca, on the islets of Gili Dasami and Gili Montang and in small areas, on the western and northern coasts of the small island of Flores. It appears now extinct in the islet of Padar and in the whole remaining territory of the island of Flores. The IUCN classifies it as endangered and vulnerable species.

The monitor lizards frequent the most disparate environments. As they live in Africa as well as in southern Asia, in Indonesia and in Australia, they have in fact adapted to a wide range of ecotypes and biotopes. There are arboreal ones, and among the terrestrial ones some live always in humid zones, close to the fresh water streams, ready to dive in order to escape a predator or to seize the preys, proving quite skilled swimmers. In the specific, the Komodo dragon is of terrestrial type. It lives in arid environments, characterized by shrubby-bushy vegetation and some puddles, which are partially a combination of desert and stony areas. 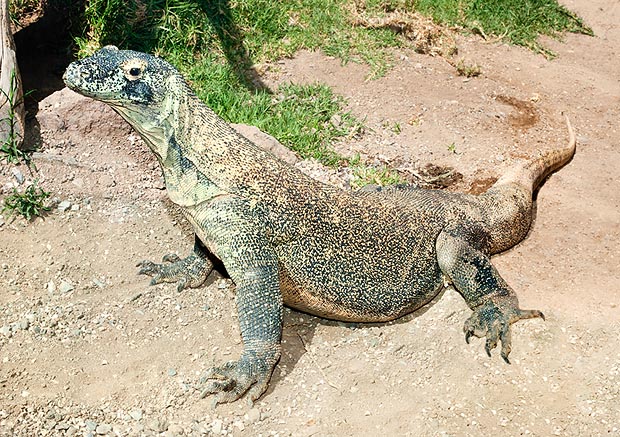 Apex-predator in its island, may exceed the 100 kg and the 4 m of length © Giuseppe Mazza

Here, it nourishes of vertebrates which may reach even remarkable sizes, such as deer, wild boars and wild pigs, without ignoring the reptilians, saurians as well as ophidians, even very venomous, seen that it is immune to their bite.

In the absence of the usual preys, it nourishes of big arthropods, amphibians, but also of carrions and rotting flesh, thus performing, inadvertently, a hygienic role because it does eliminate putrefying carrions of animals, which might be source of infectious diseases.

As happens with all the varanids, the Varanus komodoensis is a diurnal predator. Being ectothermic-poikilothermic-eurythermic, it needs, in fact, a fairly high ambient temperature, in order that its body temperature may reach the physiologic one, thus guaranteeing the right speed of movement and a correct digestion.

It can then quickly move, exceeding, for short distances, the speed of 20 km/h.

The Komodo dragon is an Apex predator, as, contrary to the other monitor lizards, it has no predators in the geographic area where it lives. At most, a conspecific can kill, in absence of food, an older or sick member of the same species for cannibalizing it.

In any case, the fights for food, territory or for the possession of a female are quite common between these huge saurians, and they always offer us a show of primordial and prehistoric power.

And the fact of nourishing of decaying dead preys, as well as of carrions, makes that rotting fragments of flesh remain trapped between the teeth, thus furnishing a real and true culture medium for tens and tens of different bacterial pathogen species, which act as a sort of extremely powerful slow-acting poison. 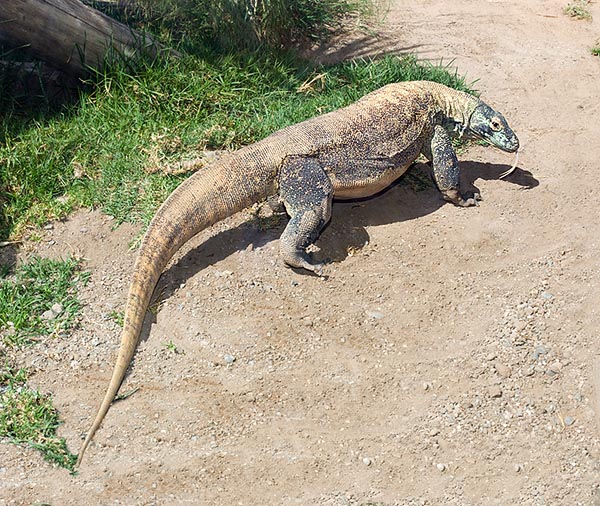 Whereby, if, for instance, a water buffalo (Bubalus bubalis), by itself capable to trample on a 4 and more metres long lizard and overcome it, is injured with a bite, the monitor lizard abandons the fight, but patiently follows it during its movements day after day, waiting for the big bovine suffers the infective effect of the injury it has gotten. It will die within a week or so, and then it will be sufficient to be close to it for getting abundant food for one month.

The group of the varanids is much homogeneous, therefore, apart the sizes, the morphological lines may be included into general tendency lines, reason why all the species, presently known to the zoology, are leading to the only genus Varanus.

The Komodo dragon apart from the size of 4 and more metres of length and the weight which may reach and exceed the 100 kg, as well as the other species of varanids, has a slender body structure and reminds the lacertids for the conformation of the head and the muzzle.

Actually, the big size of this saurian, in such an isolated habitat, has led the herpetological biologists to think that it is a case of “insular gigantism”. The biologists define “insular gigantism” that condition for which a plant or an animal acquires high sizes in the following generations, due to the concomitant absence of competitors and of predators and the presence of a condition of geographic isolation.

Going back to the morphological similarities to the lizards, we note in the Varanus komodoensis, a slender and serpentine head and an extraordinarily elongated neck; the trunk and the legs are slim but robust and powerful; the fingers end in much robust big nails and the tail, compressed on the sides, has a pointed tip; and this, as we shall see, is a real and proper weapon for hunting and for defence.

As for the other varanids, the eyes of the Komodo dragon, which, like many serpents shine an “evil” light, have a rounded pupil and are, moreover, furnished of mobile eyelids. Also the tongue of these saurians resembles much to that of the ophidians: long, bifid and pale pink, it may be retracted in a hollow of the mouth. 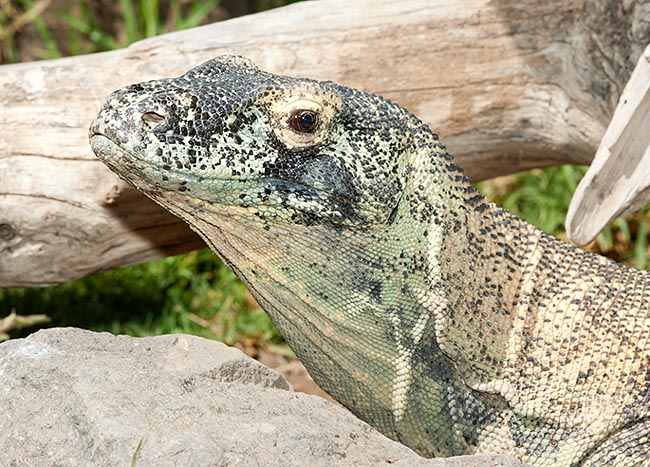 It is well known the image of the serpents which continuously extract and retract their bifid tongue, for tasting and smelling the air through the Jacobson’s organ, present behind the nose and connected to the base of the tongue by means of nervous fibres, organ allowing to perceive odorous particles in the atmosphere in concentrations of the order of parts per million (ppm).

The same thing, with the same utilization, happens in the varanids. Famous are the film shoots, nowadays become historical documentaries, done by the zoological biologists Dr. Angus Bellairs and colleagues, by means of a Super 8 movie camera, during the seventies on the Komodo island, where they observe this sort of utilization of the tongue for finding the carrions of ovines, which these ecologists had purposely hidden to get them out into the open (see text Serpentes).

The description of the Jacobson’s organ in its anatomy and physiology, goes out of my preparation of field biologist and zoologist, but the reader may satisfy his curiosity with a vast choice of existing scientific articles and manuals, where skilful anatomists and physiologists furnish detailed descriptions in the structure, ultrastructure and function. The teeth, even if not too big, are very strong and robust, planted on the internal border of the jaws. The tegument of the Komodo dragon, like that of the other species, is extremely robust and resistant, which is why these reptilians were and, unluckily, still are, hunted in the various continents for the skin, very sought for, in commerce for fabricating shoes, bags and other objects of the western Millinery. The dorsal parts of the body are covered by irregular small scales, simply placed one close to the other, or by more or less large granules, whilst the lower parts of the body appear covered by quadrangular scales, regularly placed in oblique series. Finally, roundish or bigger angular scales cover the head. When in the wild, it may reach the age of 30 years.

The Komodo dragon, like the other species of varanids, has a fierce and irritable temper. It is a shy and wary, but also much nervous, animal which easily dashes in a very aggressive way. 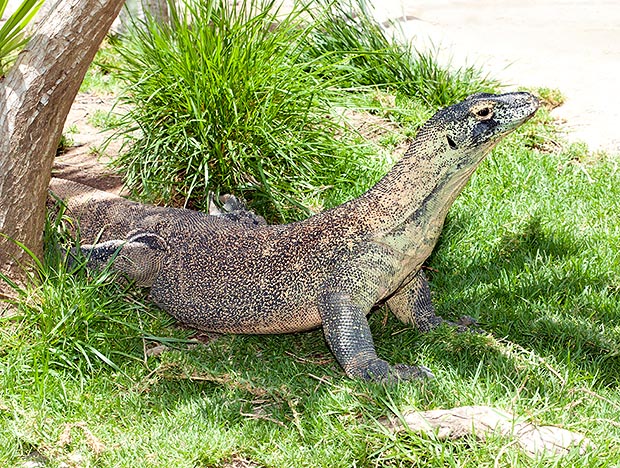 The females lay a twenty eggs. Have reproduced by parthenogenesis in 3 zoos © Giuseppe Mazza

Many have been the human victims, then devoured by these big lizards, due to the size, the danger in the teeth and of the infections it may cause with a bite, not to forget the strength of the tail, which it uses in the same way of the crocodile and the alligator.

The Swiss baron Reding von Biberegg, who had a degree in biology of the fauna, but who, given the well-being, did not practice at the academic level, however, having in himself the visceral love for the nature is a famous example of the same.

In 1974, at the age of 84 years, but still full of energies, during a naturalistic-scientific expedition he financed on the Komodo islet, got out from the camp early in the morning while all the others were still asleep, going to photograph the endemic fauna and flora, during the cooler hours of the day.

He never did come back, his friends and colleagues, gone looking for him, found only the camera, the binoculars, the sack and a bloodstained shoe, which made immediately guess the end he had done.

Still today, there is a cross on the island to remember this person so much in love of the Nature and victim of the Komodo dragon.

When one of these giants reacts, for instance struggling with a conspecific, it furiously bites (they are immune to the bacteria they hold in the mouth, that is why they get only hurt, even if the wounds are much deep) and placing on its side gives extremely strong blows with the tail; the same blows it gives when hunting a deer in order to break its legs. At the climax of the irritation, they may even regurgitate the half-digested food on the unwary who have dared to disturb them.

The Varanus komodoensis do not build nests. They reproduce by means of eggs, laid on the ground, in number of 20, in suitable locations which guarantee a constant temperature and in the highest possible position till the moment of the hatching comes. They may be also termite mounds, or nests abandoned by some species of galliformes leading to the family of the Megapodiids (Megapodiidae), birds with small head and big feet.

In Kansas, USA, at the Sedgwick County Zoo, in 2008, they have documented the first reproduction by parthenogenesis in this saurian; later on this phenomenon has occurred again at the zoo of Chester and London, In England.