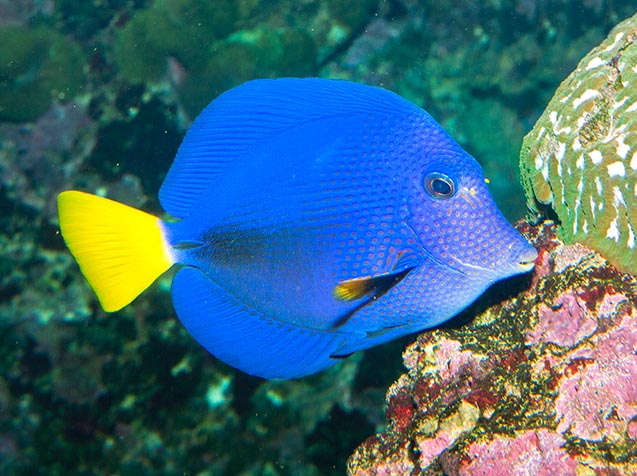 The Yellowtail surgeonfish (Zebrasoma xanthurum Blyth, 1852) belongs to the class of Actinopterygii, the ray-finned fishes, to the vast order of Perciformes and to the family of Acanthuridae.

The name of the genus Zebrasoma comes from “zebra” = zebra, the well known African equine, and from the Greek “soma” = body, that is, an animal “with zebralike body” due to the vertical bands, unusual in a surgeonfish, even if, to be honest, in this species we remark only some small dots. But for the sail-shaped dorsal and the concave profile between the eye and the snout, it has been related to the Zebrasoma desjardinii.

The name of the species xanthurum comes from the Greek “xanthos” = yellow and “ura” = tail, with obvious reference to the yellow caudal fin.

The yellowtail surgeonfish is common in the Red Sea, in the Arabic Sea, in the Gulf of Aden and, generally, in the tropical waters of the western Indian Ocean, from Somalia to the Maldives, to the western India and to Sri Lanka. Then, it is found, inexplicably, in Vietnam.

It lives in the madreporic formations and along the rocky coasts covered by seaweeds, never under the 20 m of depth. 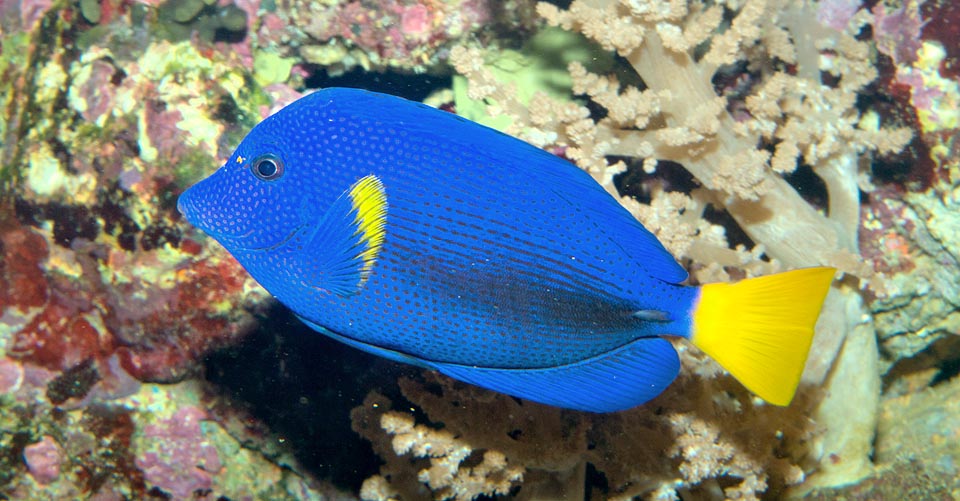 Common in the Red Sea and in the tropical waters of the western Indian Ocean. It can exceed the 25 cm, but its length is usually of 15 cm © G. Mazza 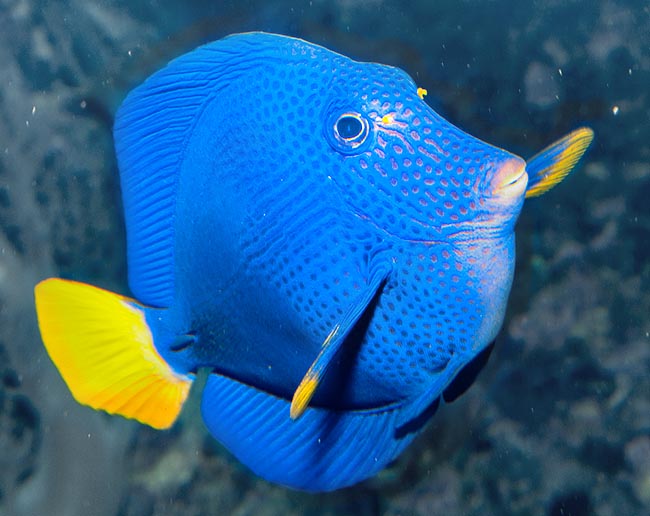 It feeds on algae, without ignoring the debris and the small animals it can find among the madreporic interstices © Giuseppe Mazza

The caudal peduncle shows on both sides the cutting blade, typical of the surgeon- fishes, and the protractile mouth has tiny teeth, even pharyngeal, good for a diet based on the filamentous seaweeds.

Apart the tail and the upper part of the pectoral fins, which have a nice bright yellow colour, in the overall it is all blue, paler on the front side, where stands out a dark dotting, usually violaceous, reddish at times, which involves also the snout.

The background colouration changes slightly depending on the geographical zones and the mood of the fish. Furthermore, by night, the sides get pale, the blue fades and, under the back, at 1/3 of the height, a dark longitudinal stripe appears. It is its night mimetic pyjama.

The yellowtail surgeonfish goes around along the whole day, at times in pair or in small schools, looking for seaweeds, without ignoring the debris and the small animals it can find among the madreporic interstices.

The eggs are pelagic. The populations may double in 15 months only, and even if it is hunted for the domestic aquaria, it is a low-risk species, with a vulnerability index of 31 per 100.