Alectis indica (Rüppell, 1830) belongs to the class Actinopterygii, the ray-finned fishes, to the order of the Perciformes and to the family of the Carangidae counting 30 genera and almost 150 species fished often commercially or for leisure. One of the most important families of sea fishes, mostly tropical but frequent also in the Mediterranean with schools of “oily fish” at low cost like the well-known Atlantic horse mackerel or Common scad (Trachurus trachurus) and much bigger species, prized, as the Greater amberjack (Seriola dumerili) or the Leerfish (Lichia amia).

The name of the genus Alectis, recalls Alecto from the Greek “Ἀληκτώ” (Alēktó) from the Greek one of the three Erinyes of the Greek mythology then later resumed by the Romans: winged female figures who tortured the killers, especially those of the family environment, and then the wicked in general. They screamed terribly, with their mouths wide open. Serpents in lieu of the hairs and having hard whim and burning embers to punish the guilty. A clear reference to the long filaments of the fins and to the greediness of this fish.

The specific name indica, in Latin, refers to the site where it lives, actually much vaster. 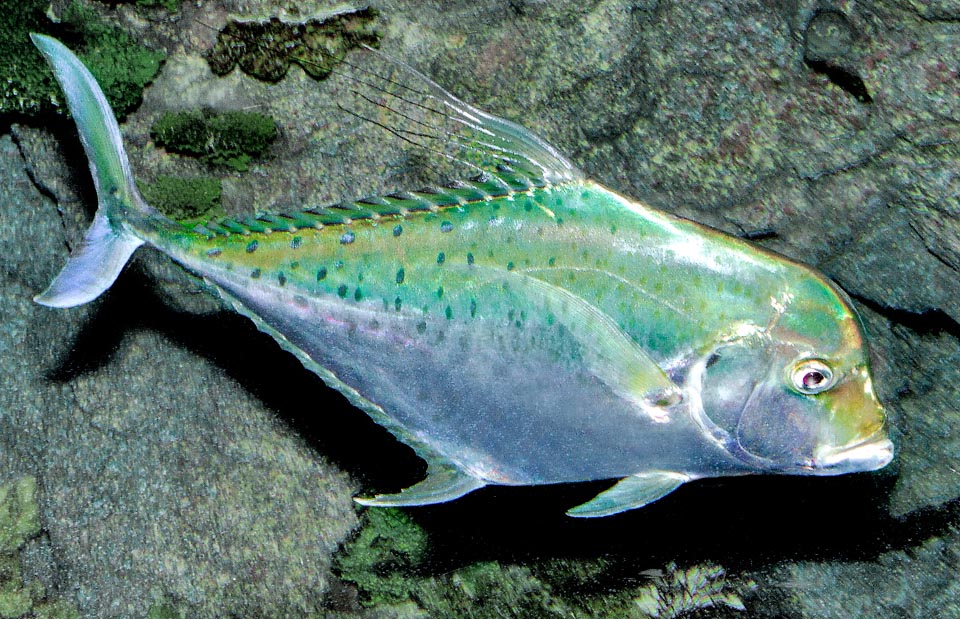 Alectis indica is an edible carangid of tropical Indo-Pacific. Insatiable and fast can reach 175 cm and 25 kg of weight © Giuseppe Mazza

This is a relatively chilly species. Starting from the Red Sea and the Gulf of Aden, we find it, indicatively, going along the coast, up to South Africa, including Madagascar and the adjacent islands, the Comoros, Mayotte, Reunion, Mauritius and then the Seychelles, Maldives, in India and Sri Lanka, Burma, Malaysia, Indonesia, Papua New Guinea and Australia. Northwards, it reaches Philippines, Taiwan, China, Korea and southern Japan. Towards South-East it is present in New Caledonia, Vanuatu, Fiji, Tuvalu and easternmost, the Hawaii Islands.

The adults swim in school along the coasts at 20-100 m of depth, mainly by the 60 m, whilst the young, initially pelagic and subjected to the currents, grow up often hidden in the seagrass meadows and close to estuaries. 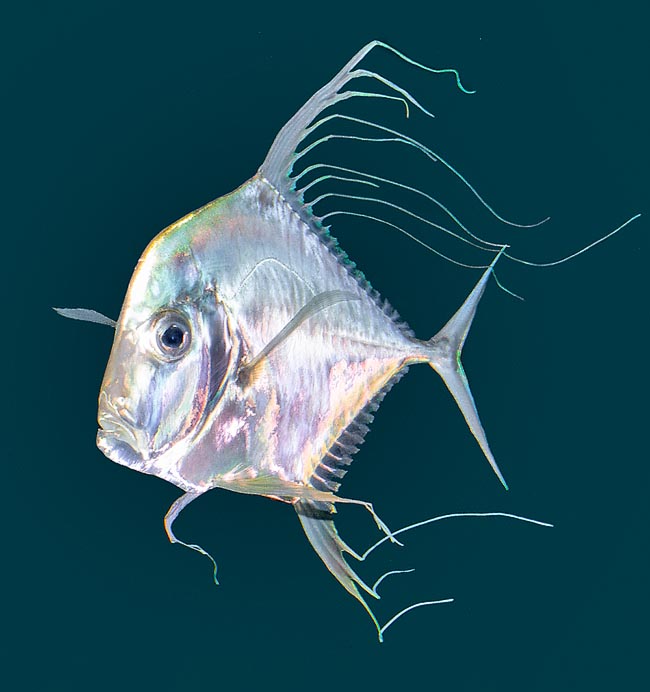 Though measuring usually about 1 m, Alectis indica can reach the 175 cm with a weight of 20 kg. The body, angular, is much compressed laterally.

The profile of the head in the adults displays a slight concavity at the height of the eyes and this distinguishes it from similar species belonging to the genus Alectis. The profile of the final part of the body is almost triangular.

The scales, really tiny, are almost invisible, embedded into the skin. The lateral line stands out well, evident, very curved upwards in the fore part of the fish.

The pectoral fins are falcate, the causal fin forked and long and narrow caudal peduncle, typical attributes of a fast swimmer.

The livery is silvery with green reflections on the back sprinkled with a slight dark spotting, at times poorly visible, displays a small typical black spot in the upper part of the operculum.

Analogous look have the young Alectis ciliaris, deprived however of filaments on the pelvic fins, and for the shape not less flat and angular than the body, the young evoke the Selene vomer, glittering guests of the public aquaria, that belong to the same family of the Carangidae but live in western Atlantic and rarely exceed the 40 cm.

Alectis indica nourishes of all what it is able to catch with its large ravenous mouth; of all sort of fishes, squids, cuttlefishes, benthic crustaceans and jellyfishes. 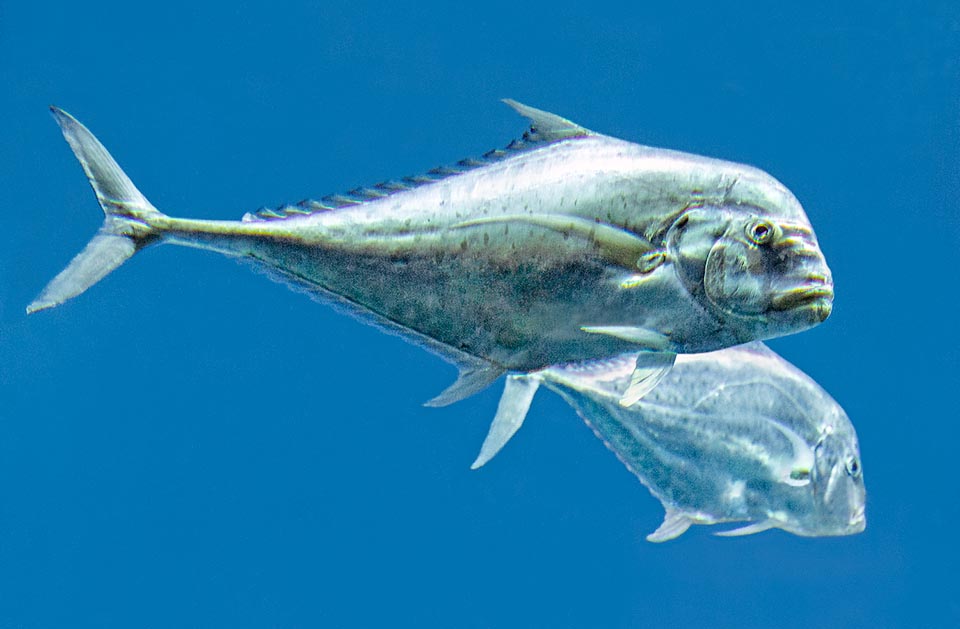 In the big adults the filaments disappear. They don’t need anymore to camouflage or to hide in the submerged prairies as now they are predators © Giuseppe Mazza

It is a very active fish, always ready to swoop very fast. The eggs, emitted and fecundated in mid-water, are entrusted to the currents. It seems that the wedding is not collective, and occurs during the day, taking advantage of the tides for a better dispersion of the progeny.

The flesh of the Alectis indica is locally appreciated, so much that in Singapore has taken place a pisciculture thereupon and some nations, in order to limit not necessary slaughter among the young, they impose wider meshed nets. Nowadays (2020) it is a too much fished species with decrease of its members. The decimated populations should, theoretically, to double in 1,4-4,4 years, but the vulnerability index marks already 62 on a scale of 100.

Alectis indica was last modified: May 3rd, 2022 by Peppino