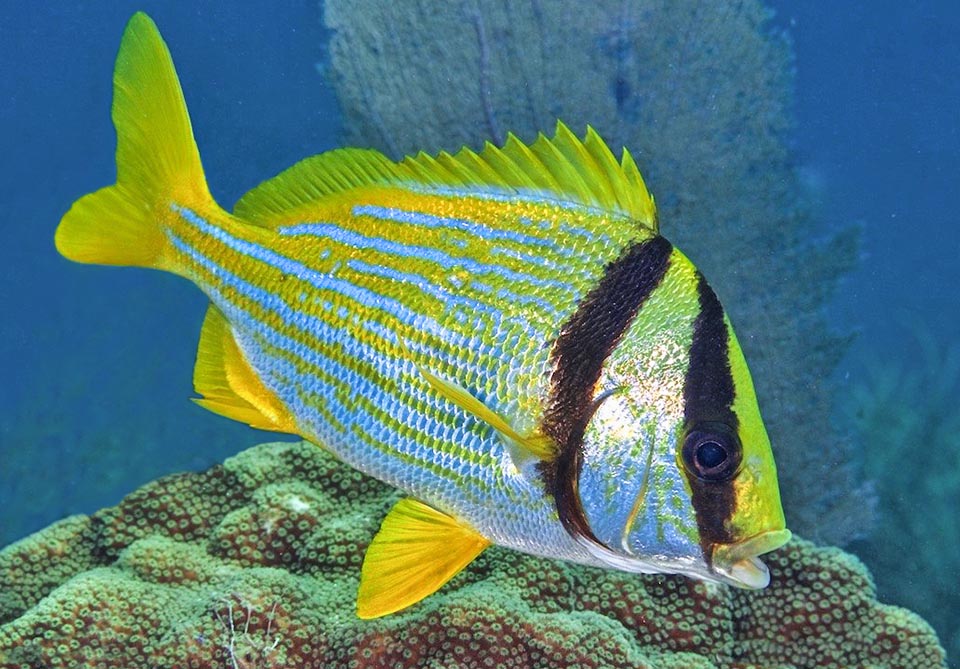 Anisotremus virginicus is a species very common in the Caribbean area, up to Brazil. Northward, it has been introduced in the Bermuda Islands © Allison & Carlos Estape

The Anisotremus virginicus (Linnaeus, 1758) commonly known as Porkfish, belongs to the class of the Actinopterygii, the ray-finned fishes, to the order of the Perciformes, and to the family of the Haemulidae, that counts 19 genera and 134 species.

These are fishes mostly marine or of brackish waters, that at first sight remind for their look the Sparidae or the Sciaenidae.

All species that rarely exceed the length of 60 cm and that at times have an important role in the human feeding.

The name of the genus Anisotremus comes from the Greek “Άνισος” (anisos) = different, unequal, and “Τρέμα” (trema) = orifice, refers to the two sensitive orifices it has on the chin under the jaw. The specific term virginicus = of the Virgin Islands in Latin, indicates a site where this species is very frequent. 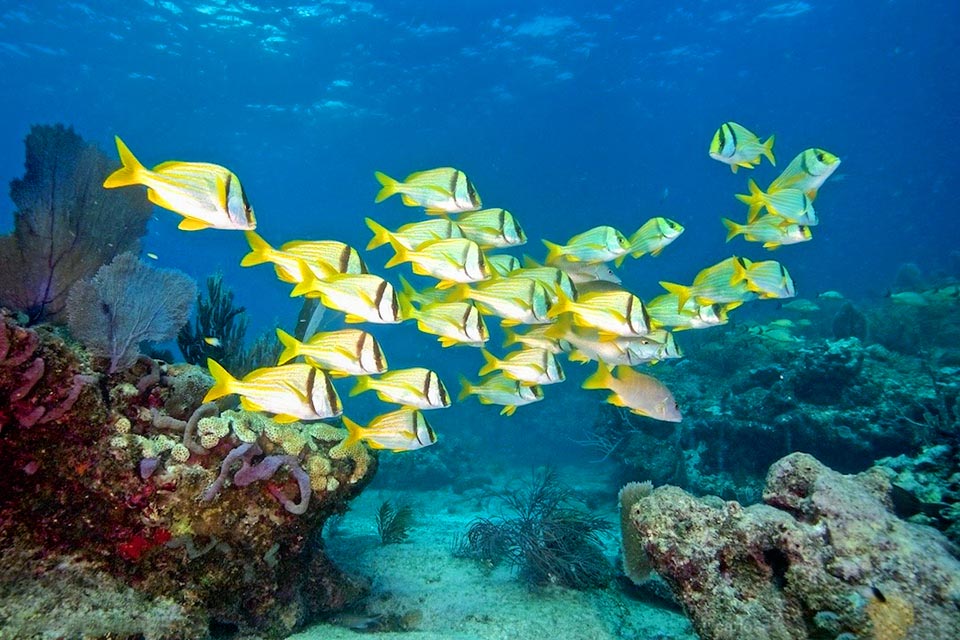 Social the day, it is easy to meet in schools that rest, almost still, often along the slopes of the rocky walls and of the reefs © Allison & Carlos Estape

The Anisotremus virginicus is a species common in the tropical waters of the western Atlantic. Indicatively, we find it along the coasts of Florida and in the Gulf of Mexico, Cuba, Haiti, Dominican Republic, Puerto Rico, and all the coasts of the Caribeban Sea up to beyond Venezuela in Guyana and finally Brazil. Northward, it has been introduced in the Bermuda Island.

It lives in relatively shallow waters, swimming between 2 m and 20 m of depth. It is easy to meet in schools resting during the day, almost motionless, along the slopes of the rocky walls and of the reefs or at the entrance of the grottoes. It almost never goes farther more than 50 m from the coasts. 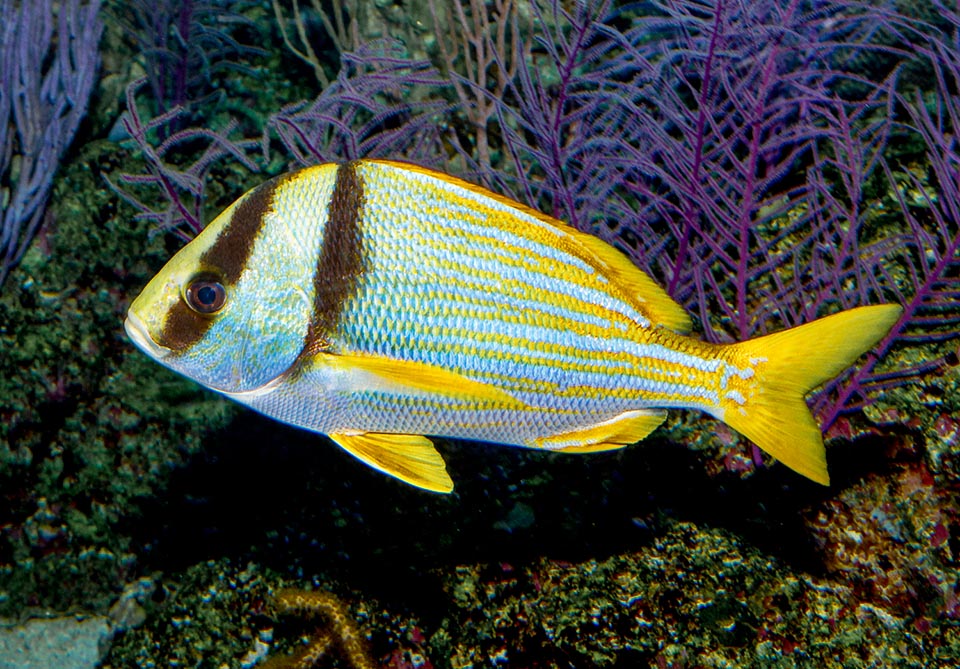 It hunts by night, alone, eating worms, small shrimps, mollusks, starfishes and sea urchins. It has no incisors but solid jaws © Giuseppe Mazza

The background colour of the adults is pale black with silvery reflections crossed by luminous yellow bands, as well as the fins and the front, but especially are noted two showy black belts: the first, oblique, crossing the eye and the second one almost vertical at the height of the operculum. 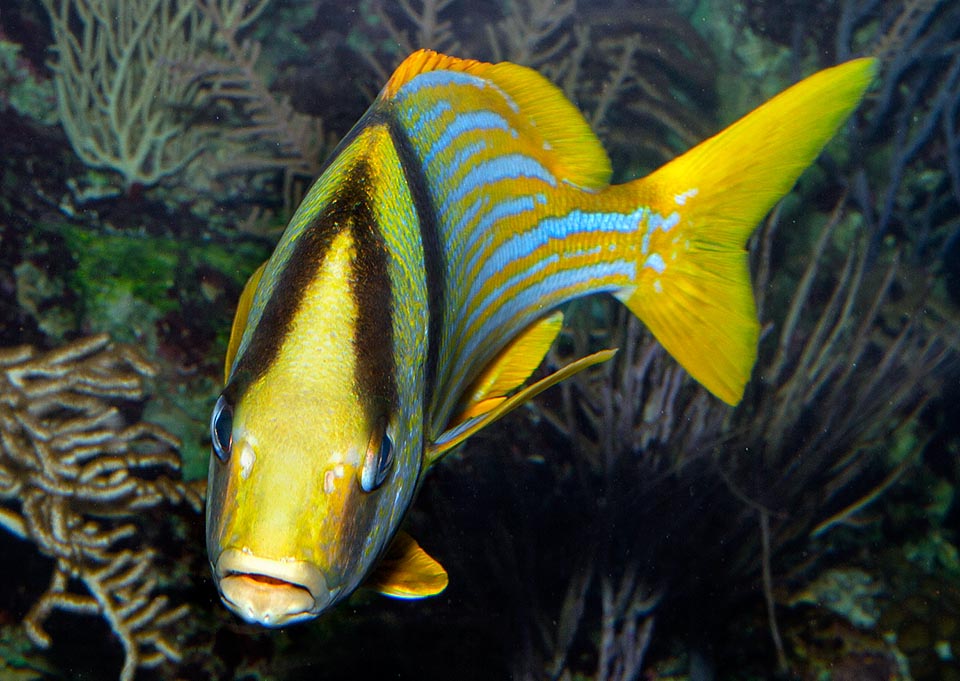 Near the jaw, on the chin, we note two small orifices, very sensitive movement receptors, able to localize even the worms moving under the sand © Giuseppe Mazza

The young do not have these belts but display two horizontal lines on white background and a fake black eye on the caudal peduncle to confuse the predators. Either the small black covering the eye or a false eye towards the tail, are very frequent strategies in the world of the fishes because the head is a vital organ whilst the tail can grow again. And even on the dry land we have some reptiles as, for instance, in the Scincidae the Scincus scincus, the Tiliqua rugosa or the Egernia stokesii, that in the same way confuse the ideas to the predators.

Going back to the young of Anisotremus virginicus, with their fake eye already present at the larval stage, we note that at the beginning the fins are translucent and there is only one dark central zone. Then, with the raising of the back, appears the second mimetic horizontal line, and the fins gradually get coloured yellow together with the head.

The mouth of the Anisotremus virginicus, with thick lips, is of relatively modest size. It has several conical teeth, small and sharp, but are absent the canine teeth as well as the palatine ones, replaced by the pharyngeal teeth. 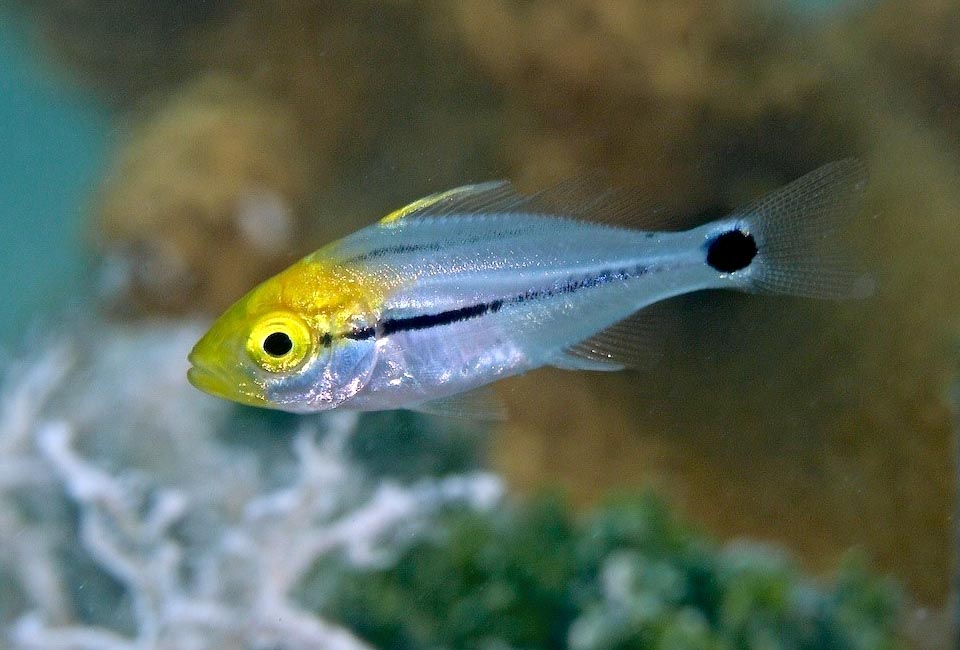 Young are quite different. Are absent the vertical band and the oblique hiding the eyes, but have the horizontal black lines and a fake eye on the caudal peduncle © Allison & Carlos Estape

Under the jaw, on the chin, stand two small orifices separated by a groove, already cited in the etymology. They are motion receptors for localizing the small crustaceans and even the worms moving under the sand. Moreover, it can emit sounds for scaring the intruders, odd thing, but not completely unusual, seen that the same occurs also with other families of fishes such as the Pomacentridae, for instance Hypsypops rubicundus or Dascyllus trimaculatus. It does it using the swim bladder as echo chamber, gnashing the small pharyngeal teeth, Moreover, like all Haemulidae, the interior of the mouth is covered by red and by opening wide the jaws, menaces, often scares the enemies.

The Anisotremus virginicus is active only during the night, when it explores with its sensors the sandy bottoms and the seagrass meadows, lookiong for preys. Whilst during the day it’s a social fish, resting in group, it prefers hunting alone. It looks for worms, small shrimps, molluscs, starfishes and sea urchins. The jaws are very strong and break, in lieu of the canines, shells and carapaces. 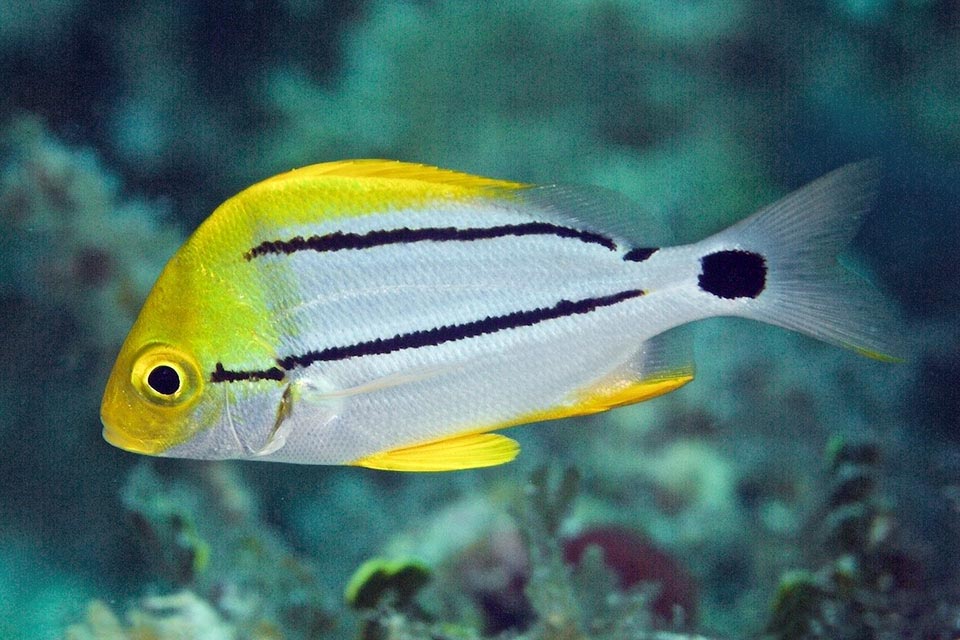 With the growth of the back, the second horizontal mimetic line is well marked, head and fins become gradually yellow and can be seen the two future bands © Allison & Carlos Estape

The young individuals, like in other species, often behave as “cleaner fishes”, nourishing of the ectoparasites of big sized species. Nowadays they are menaced in the Caribbean by the invasion of Pterois volitans, whilst the enemies of the adults are mainly the sharks, the groupers and the big Lutjanidae.

Reproduction takes place in open sea with the eggs abandoned to the currents. The larvae get shelter and grow on the bottoms, often in the submerged prairies.

The Anisotremus virginicus is often locally fished for feeding reasons, but the flesh is poorly prized and it is good to keep in mind that, depending on the zones and the type of feeding, its consumption may cause a serious food poisoning known as Ciguatera. The resilience is good, seen that are sufficient 1,4-4,4 years for doubling the populations decimate by the events and the fishing vulnerability index of the species is presently, moderate, marking 31 on a scale of 100.