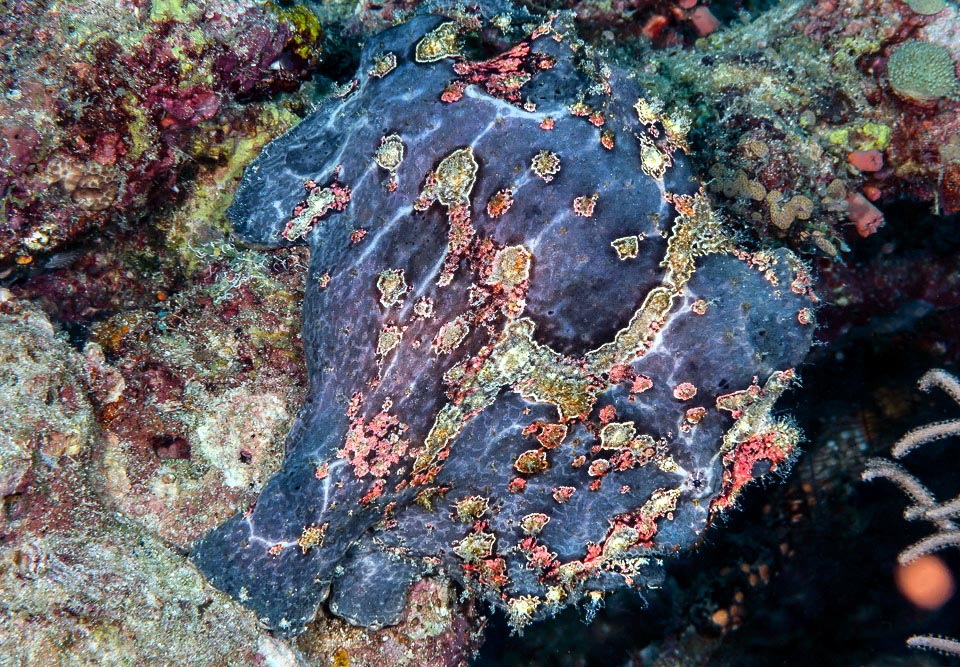 Where are eyes and mouth? Antennarius commerson is a real master of camouflaging. If you don’t see them, look carefully below, on the right © Francois Libert 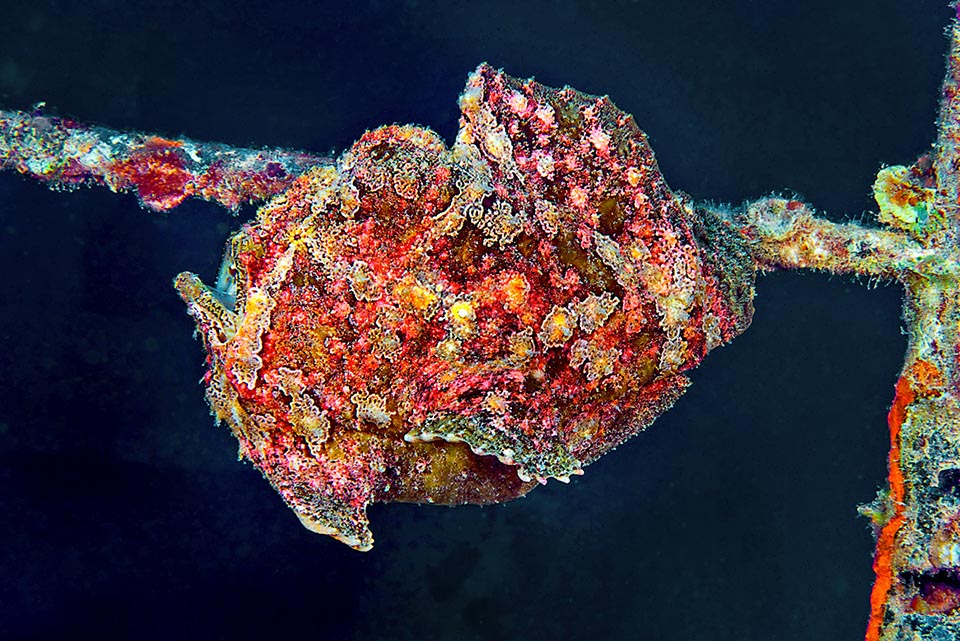 Here is perched on the rope of an old sunken vessel. The mouth, half-open, is on the left © Keoki Stender 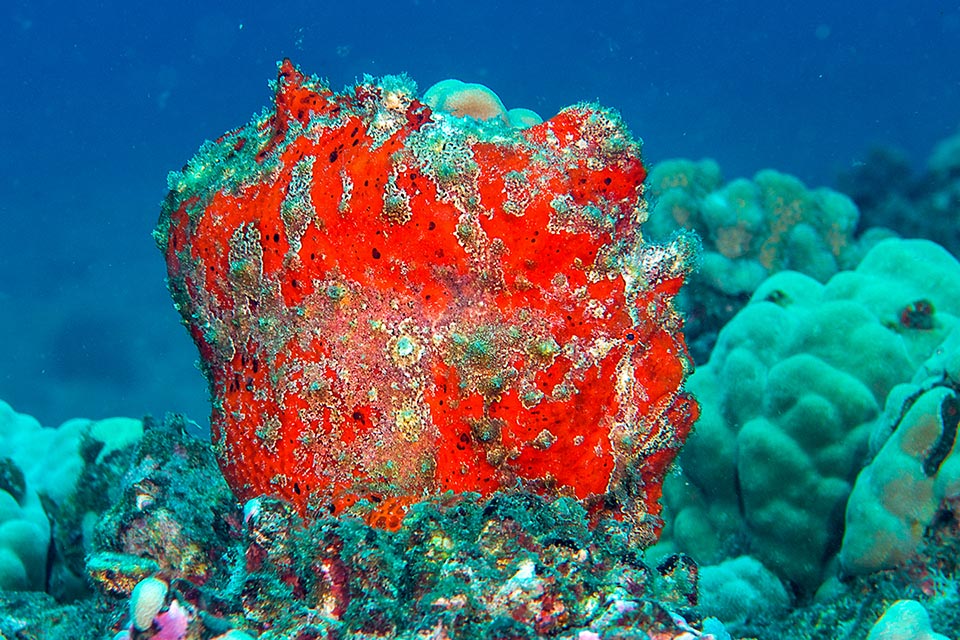 This really looks like a sponge, but it’s always a camouflaged Giant frogfish calmly waiting for a prey to pass by © Keoki Stender 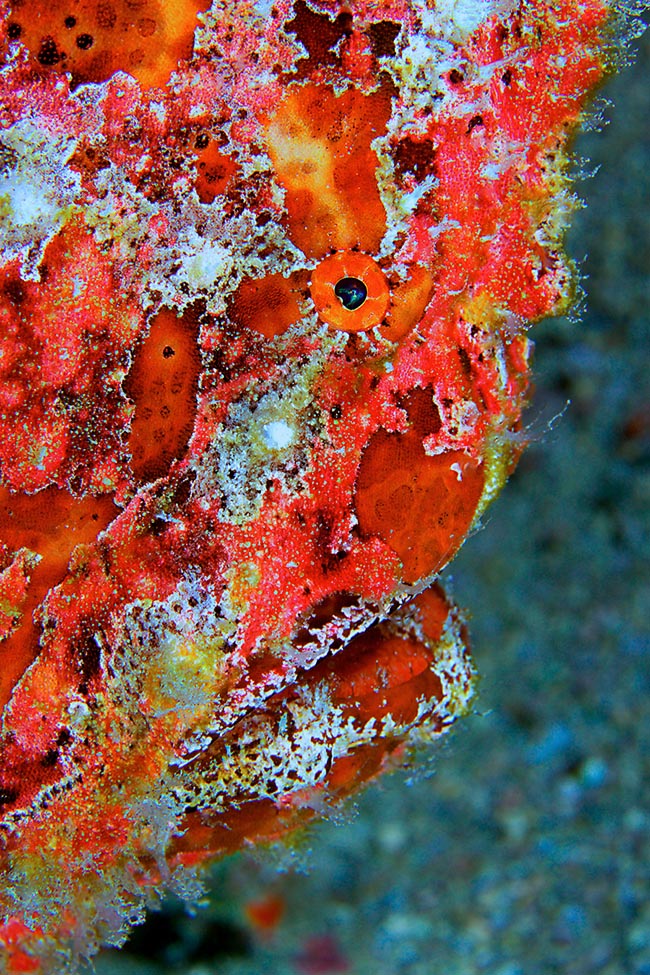 Here, if you are still doubtful, is the enlarged close-up of the eye and of the mouth ajar © Keoki Stender

These are benthic species characterized by the first spiny ray of the dorsal fin, placed on the head, that has transformed into a mobile fishing pole, complete with a luminescent bait in the abysses, for attracting unaware fishes looking for food towards its enormous mouth.

They are found in all the oceans, between 20 and more than 1000 m of depth with dimensions going from 3 cm to the 2 m of the famous Angler (Lophius piscatorius) that has given, due its size and renown, the name to the order.

With its 45 cm of length, vulgarly known as Commerson’s frogfish or Giant frogfish, Antennarius commerson is, conversely, the biggest member of the family of the Antennariidae.

The name Antennarius comes from the Latin “antenna”, that means flagpole, antenna, with reference to the aforementioned “fishing line”; whilst the specific epithet commerson, honours the memory of the French botanist and ichthyologist Philibert Commerson (1727-1773), who participated to the famous scientific expedition of Bougainville around the world.

Against the rules, he had taken on board his wife, disguised as a servant, and for punishment, was disembarked in the island of Mauritius, where he remained until his death.

Lacepède remembers him here, grateful, for the annotations he has left, useful for the description of this whimsical fish.

Lessepsian species, having entered the Mediterranean like many others through the Suez Canal, we find it, indicatively, starting from the Red Sea, in Mozambique and in South Africa.

Present in Mauritius, Seychelles and Maldive Islands, it has colonized the Andaman Islands and the coasts of Thailand, Indonesia, Philippines, Taiwan up to the southern part of Japan. Douthwards, after Palau, Papua New Guinea and Australia, it reaches New Caledonia and Lord Howe Island. 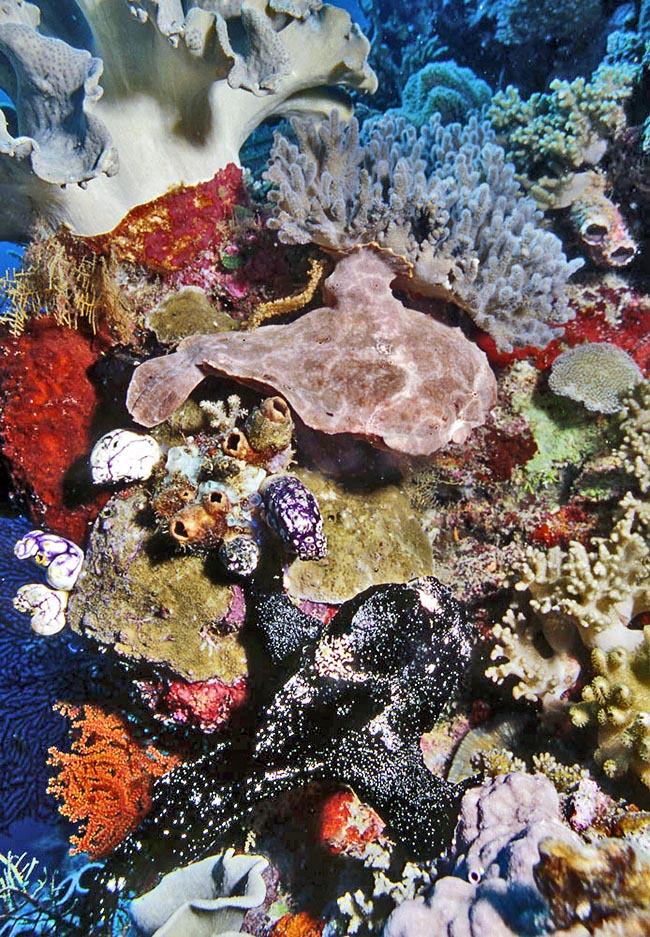 Here, looking well, there are two. One, pink, on top among the madrepores, and a black below, with open fins © Paddy Ryan

Eastwards, we find it in Samoa, in French Polynesia and in the Hawaii Islands, up to the coasts of Central America, in Panama, Colombia and Ecuador.

It is a species that goes moving on the bottoms, but usually does not go down under the 70 m.

It can be found also in the harbours, under the jetties, and loves the wrecks of the old sunken vessels, stuck to the structures corroded by the time and, unbelievably, peched on a rope.

However, its natural environment is close to the sponges that grow in the entangled madreporic world. It settles itself very close, in the padding by points, perfectly imitating their colour and patterns, always ready to gulp down unaware fishes made curious by its unusual moving bait.

The Giant frogfish in the whole has a massive, rounded body.

When it is standing, motionless, it is very difficult to discover it, to understand where stand the tiny eyes or the big half-closed mouth.

The pectoral fins and the pelvic ones have transformed in legs, and the skin, elastic and wrinkled, without scales, is covered by drawings and by spots, white, pink or red that simulate incrustations or oscula used by the sponges to expel the water.

The background colour, extremely variable, has given origin to several synonyms. It can be grey, white, black, yellow, violet, green, brown or flame red.

Antennarius commerson is capable of changing livery better than a chameleon, but this change of colour and of drawings is not immediate and requires, depending on the environment, days or weeks. On the other hand, to this fish, decidedly lazy, the quick changes of colour are of no use, because once found the suitable place, if the preys abound, the Giant frogfish is able to stay there even one month. 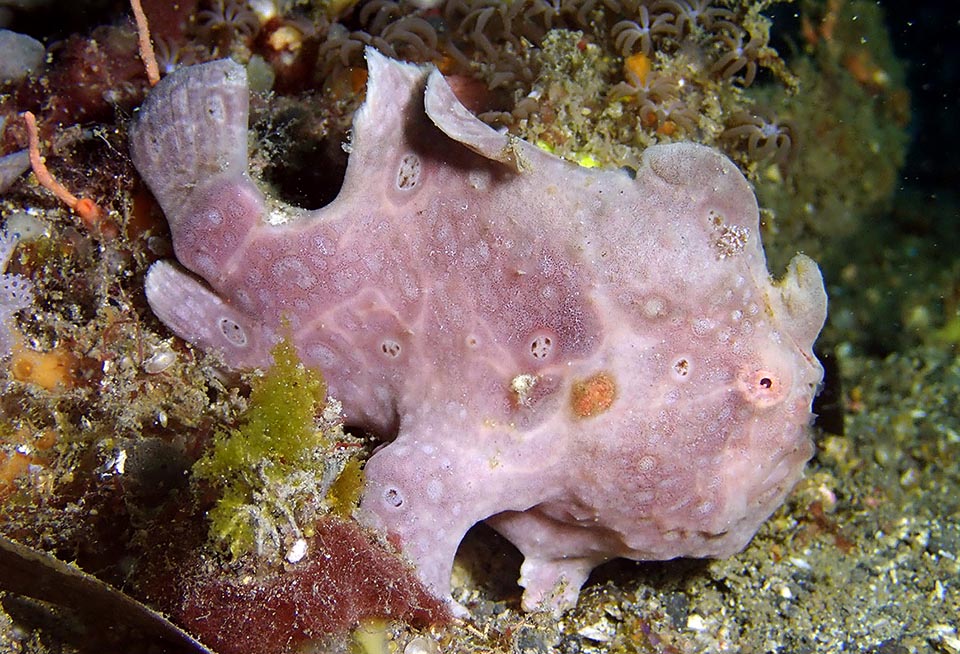 At last, here it is easier to catch the outline. The background colour of Antennarius commerson may be violet, red, pink or black, but also white, grey, brown, yellow or green. The body, spotted at times, is stocky, roundish, with drawings like encrustations or to oscula, the holes used by the sponges to expel the water © Paddy Ryan 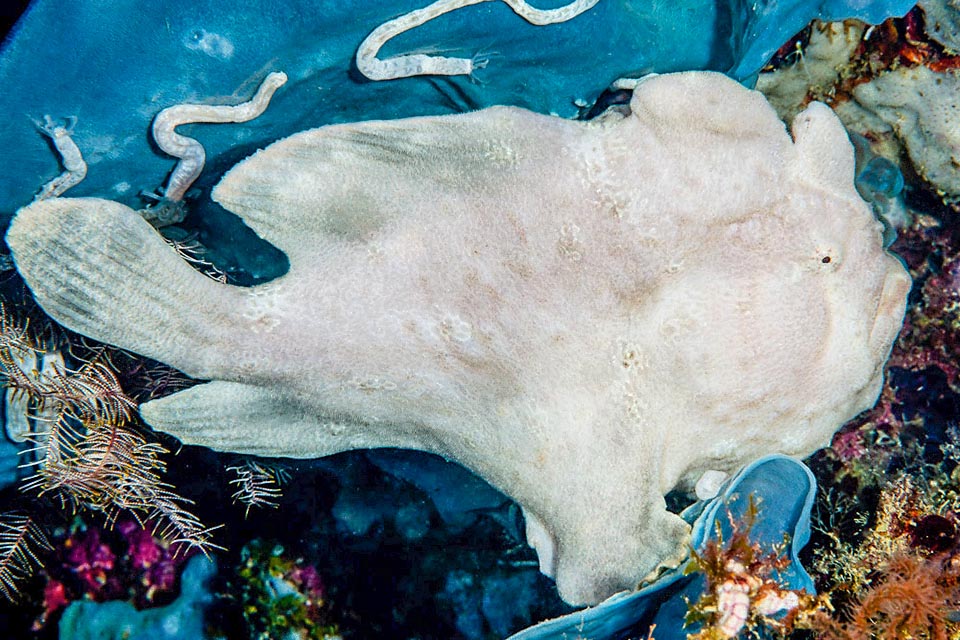 Moreover, if mowing can adapt over time its livery. The pectoral and pelvic fins have transformed into legs for moving on bottom. Obviously, it is a very bad swimmer, but if it must run away, it does it with energetic tail blows or moving by reaction, like pulps, swallowing huge quantities of water that then is violently ejected but the gill holes © Francois Libert

Oriented upwards and equipped by several villiform teeth, thin, grouped in bands like the hairs of a brush, the mouth is protractile, as wide as the body. It opens projecting forward, abruptly, in just 10 thousandths of a second. This creates a strong depression, able to suck up whole fishes even of its same size. 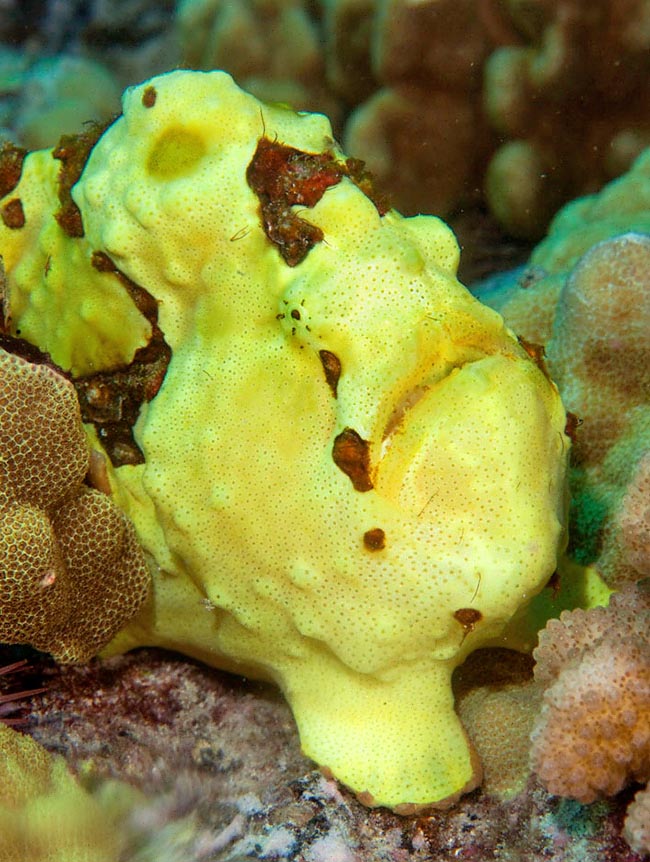 The mouth, as wide as the body, is protractile. It opens projecting ahead, suddenly, in just 10 thousandths of a second. This creates a strong depression that even inhales fishes of its same size. In the stomach, expandable, like the skin without scales, there is always room, and if the prey is too long, rolls it up for digestion © Paddy Ryan

There is always room inside the stomach of a Giant frogfish, as the same is expansible like the skin, and while examining the catch it has been noted that when it swallows a particularly long species, this is rounded inside as if nothing had happened.

The dorsal fin, absolutely unusual, is formed comprehensively by 3 spiny rays and 12-13 soft ones.

The first one is formed by the old spiny ray, placed over the head, that has transformed, stretching excessively, in the characteristic mobile fishing line.

Then two fleshy protuberances follow, the second bigger, that conceal, each one, a spine.

The gill openings, almost invisible behind the pectoral fins, appear reduced to a simple circular hole.

Antennarius commerson usually moves on foot or lets itself plop, with fast short movements, from one madrepore to another.

The pectoral and the pelvic fins transformed in limbs serve to it for anchoring and moving on the bottom, but when it is in danger, for escaping, it can swim on relatively long distances with energetic blows of the tail or can even move, like the pulps, by swallowing huge quantities of water that then expels violently from the two gill holes.

The Giant frogfish does not display any sexual dimorphism, unlike other Lophiiformes that often have smaller or even minuscule males, practically reduced to parasites that spend all their existence stuck to the body of the female, offering gametes in exchange of the nourishment that they go sucking from the skin of their partner. 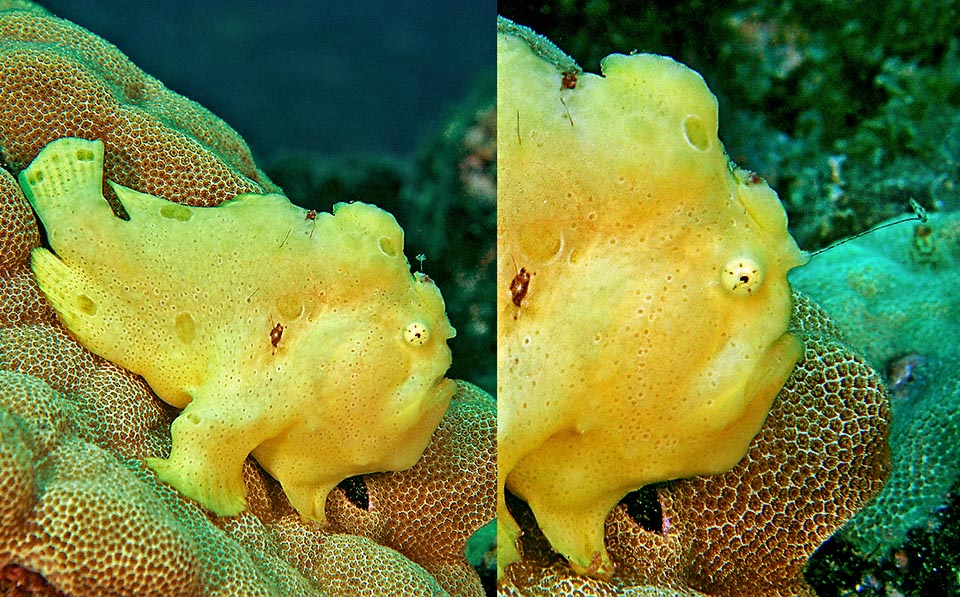 It is a catching fish. In fact, it attracts the preys moving a line, called illicium, situated on the head. Here, tight, we see it projected ahead with bait © Keoki Stender

The females of Antennarius commerson have an appearance practically identical to the males, but during their reproductive period they can be distinguished because of their abdomen, full of thousands of eggs, swollen to burst. 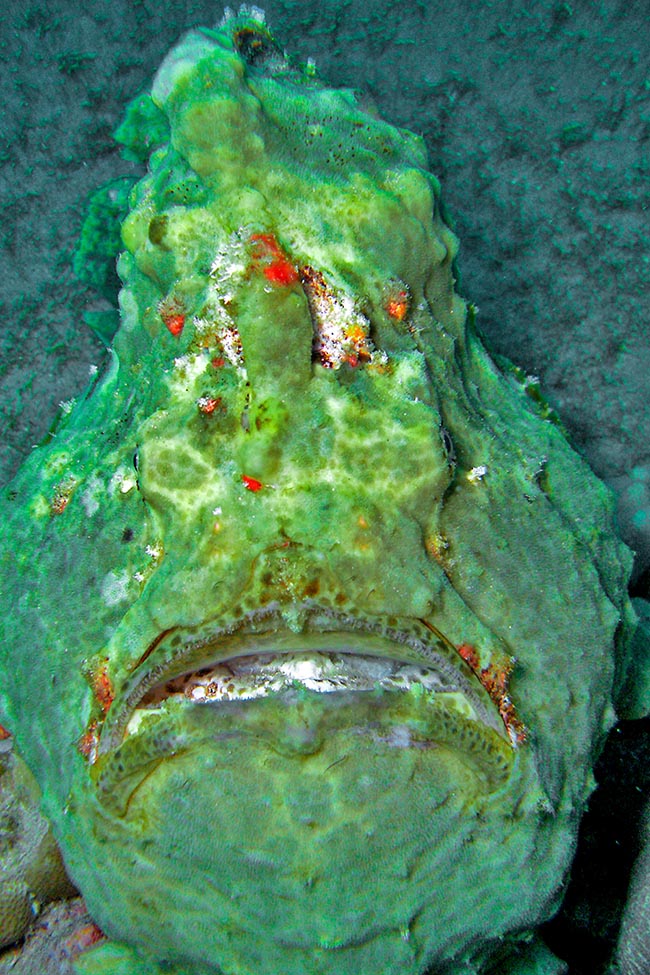 The big mouth, looking up, is armed by several villiform teeth, thin and grouped like a brush. There is no sexual dimorphism. The females are noted only during the reproductive time, because of the abdomen full of eggs. They are thousands, united in floating gelatinous cords, fecundated while female emits them, in many times, with strong jolts © Keoki Stender

After a sort of ritualized dance, the couples rise to the surface for reproduction and then entrust the offspring to the waves of the sea.

The eggs are united in floating gelatinous cords, fertilized several times by the male while the female emits them with vigorous joltings.

Immediately after that, the two separate.

Each one returns to its solitary life, especially since in the Giant frogfish the instances of cannibalism are not rare and the female, exhausted and very hungry, could even devour her partner.

The eggs hatch after a few days, but the larvae are planktonic and lead for 1-2 months a wandering life, dragged by the currents.

Already in this phase they exhibit already the illicium and a big head. They grow up nourishing of zooplankton and of small preys.

Once the metamorphosis is completed, the juvenile livery is usually yellow, at times more or less spotted.

It goes without saying that due to its curious look the Giant frogfish could make a fine show of itself in aquaria of adequate size but seeing its gluttony it must be kept alone and consequently is not usually required by the aquariology market.

Antennarius commerson can also boast an excellent resilience, with a possible redoubling of the populations decimated by the events in less than 15 months.

The fishing vulnerability index marks 35 on a scale of 100. 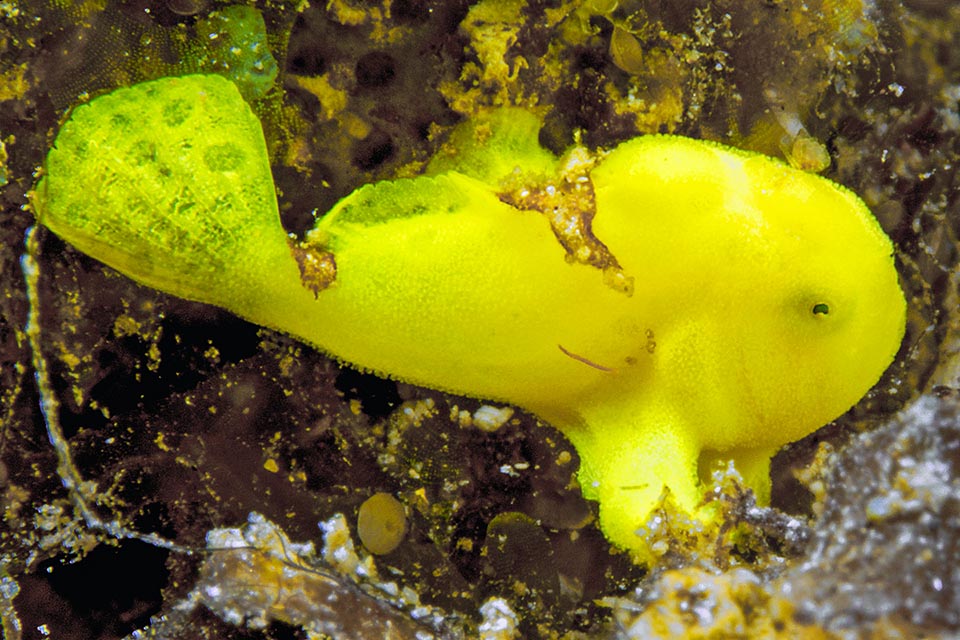 The larvae are planktonic and after the metamorphosis the young’s livery, more or less spotted, is usually yellow. Frequent in tropical Indo-Pacific, the Giant frogfish is a lessepsian species, which arrived in the Mediterranean like many other species through the Suez Canal. It is not fished for aquaria and has a very low vulnerability index © Keoki Stender