Beautiful flowers of Australia. Like small multicolored fires. Strange and new forms for our gardens. Thanks to this article, new plants were introduced in Italy. 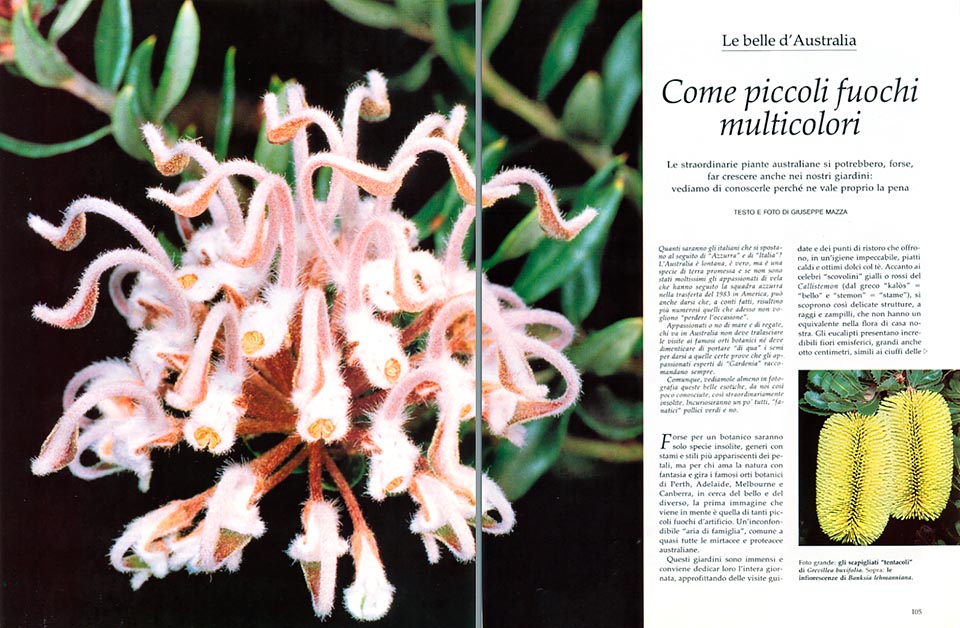 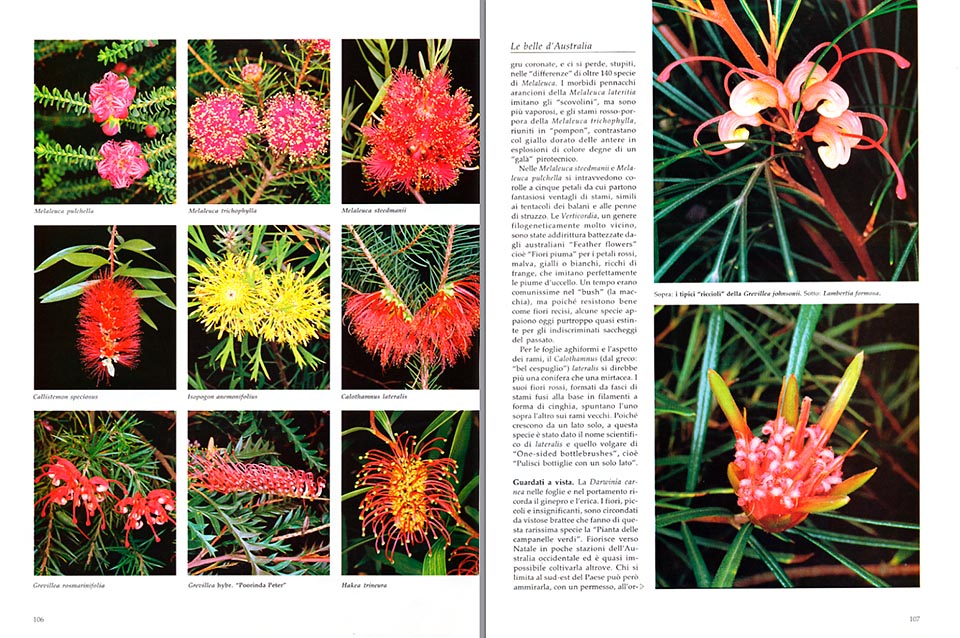 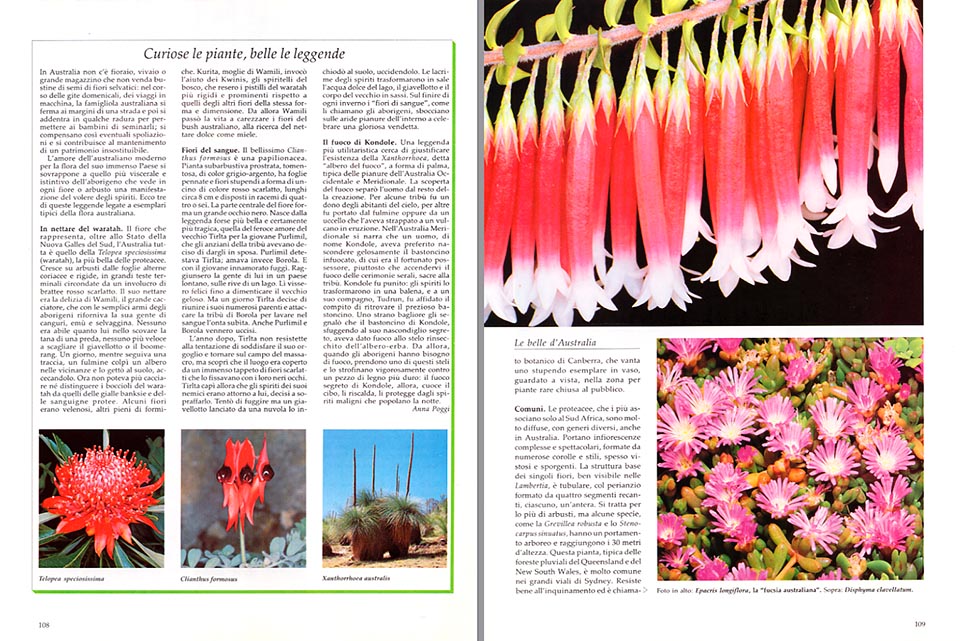 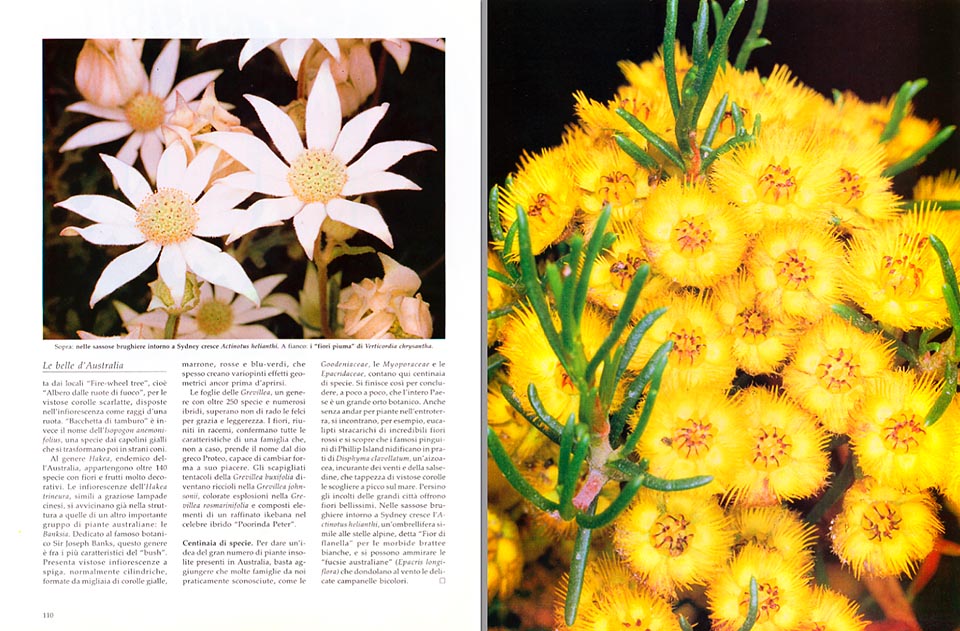 For a botanist, maybe, they will be just unusual species, genera with stamens and styles more striking than the petals, but for the man who loves nature with fantasy and visits the famous botanic orchards of Perth, Adelaide, Melbourne and Canberra, looking for the beautiful and the different, the first image which flashes to his mind is that of many small fireworks.

An unmistakable “familiar atmosphere”, common to almost all the Australian myrtaceae and proteaceae

These gardens are immense, and it is better to dedicate them the whole day, taking advantage of the guided visits and of the refreshment-rooms, which offer, in a faultless hygiene, warm dishes and excellent sweets, served with the tea.

Close to the well known yellow or red “bottle-brushes”, of the Callistemon (from the Greek “Kalos” = “beautiful”, and “stemon” = “stamen”), we can thus discover delicate structures, similar to rays and gushes, which do not have any equivalent in the flora of our places.

The eucalypts present incredible hemispheric flowers, large even eight centimetres, similar to the tufts of the crowned cranes, and we get lost, astonished, in the “differences” of more than 140 species of Melaleuca. The soft orange plumes of the Melaleuca lateritia, imitate the “bottle-brushes”, but are more fluffy, and the red-purple stamens of the Melaleuca trichophylla, assembled like a pompon, contrast with the golden yellow of the anthers in explosions of colour, worthy of a pyrotechnical “gala”.

In the Melaleuca steedmanii and the Melaleuca pulchella, we can catch a glimpse of five petals corollas, from where start fanciful fans of stamens, similar to the tentacles of the barnacles, and to the feathers of an ostrich.

The Verticordia, a genus phylogenetically very close, have been even christened by the Australians “Feather flowers”, for their red, mauve, yellow or white petals, rich of fringes, which perfectly imitate the feathers of a bird.

Once, they were very common in the “bush”, but, as they resist well as cut flowers , due to the indiscriminate pillages of the past, some species seem nowadays, unluckily, almost extinct.

For the needle-shaped leaves and the look of the branches, the Calothamnus (from the Greek “beautiful shrub”) lateralis, could be thought to be more a Conifer rather than a myrtaceae. Its red flowers, formed by bunches of stamens merged at the basis in filaments shaped like a strap, come out, one over the other, on the old branches. As they group on a side only, to this species has been given the scientific name of “Lateralis”, and the popular one of “one-sided bottle-brushes”, which is self explanatory.

The Darwinia carnea, in the leaves and the appearance recalls the juniper and the heath. The flowers, small and insignificant, are surrounded by showy bracts which make of this very rare species the “Mountain Bells”. It blooms, by Christmas time, in few stations of Western Australia, and it is almost impossible to cultivate it elsewhere. He who limits to the south-east of the Country, can, nevertheless, admire it, with a permission, in the botanic orchard of Canberra, which has a wonderful specimen in pot, closely watched, in the area for rare plants, closed to the public.

The proteaceae, which most of people associate only with South Africa, are very common, with several genera, also in Australia.

They carry complex and spectacular inflorescences, formed by several corollas and styles, often showy and protruding. The basis structure of the single flowers, well evident in the Lambertia, is tubular, with the perianth formed of four segments, which carry, each one, an anther. It’s mainly matter of shrubs, but some species, like the Grevillea robusta and the Stenocarpus sinuatus, have an arboreal appearance and reach the 30 metres of height.

This plant, typical of the rainy forests of Queensland and New South Wales, is very common in the wide avenues of Sydney. It resists well to pollution, and is called by the locals “Fire-wheel tree”, for its showy scarlet corollas, placed in the inflorescence like spokes.

“Broad-leaved Drumsticks” is, on the other hand, the name of the Isopogon anemonifolius, a charming species with yellow flower heads, which transform, later on, in unusual cones.

To the genus Hakea, endemic of Australia, do belong more than 140 species, with very decorative flowers and fruits. The inflorescences of the Hakea trineura, similar to nice Chinese lanterns, are already close, in the structure, to those of another important group of Australian plants: the Banksia.

Dedicated to the famous botanist, Sir Joseph Banks, this genus is one of the most quaint of the “bush”. It presents showy spike-like inflorescences, normally cylindrical, formed of thousands of yellow, brown, red, blue-green corollas, which often create many-coloured geometrical effects, even before opening.

The leaves of the Grevillea, a genus with more than 250 species, and several hybrids, rather often overcome the ferns for grace and lightness. The flowers, united in clusters, confirm fully the characteristics of a family which, not by chance, gets the name from the Greek god Proteus, able to change form at its pleasure. The ruffled tentacles of the Grevillea buxifolia become precious curls in the Grevillea johnsonii, coloured explosions in the Grevillea rosmarinifolia, and tidy elements of a refined ikebana in the celebrated hybrid “Poorinda Peter”.

To give an idea of the great number of unusual plants present in Australia, it is sufficient to add that many families practically unknown to us, such as the Goodeniaceae, the Myoporaceae, and the Epacridaceae, have here hundreds of species. We can finally conclude, little by little, that the whole Country is a huge botanical orchard.

Even without going for plants in the hinterland, we meet, for instance, eucalypts overloaded of incredible red flowers, and we discover that the famous penguins of Philip Island nest on lawns of Disphyma clavellatum, an aizoaceae, heedless of the winds and the saltiness, which covers with showy corollas the rocks over the sea. Even the uncultivated areas of the big cities offer very nice flowers.

In the stony moors around Sydney, grows the Actinotus helianthi, an umbelliferae resembling to the edelweiss, called “Sydney flannel flower”, for its soft white bracts, and we can admire the romantic “Fuchsia heath” (Epacris longiflora), which swing, with the wind, thousands of delicate two-coloured little bells.